It's time to forgive Serena

The tennis champ behaved terribly for a moment, but she quickly regained composure -- why can't the rest of us? 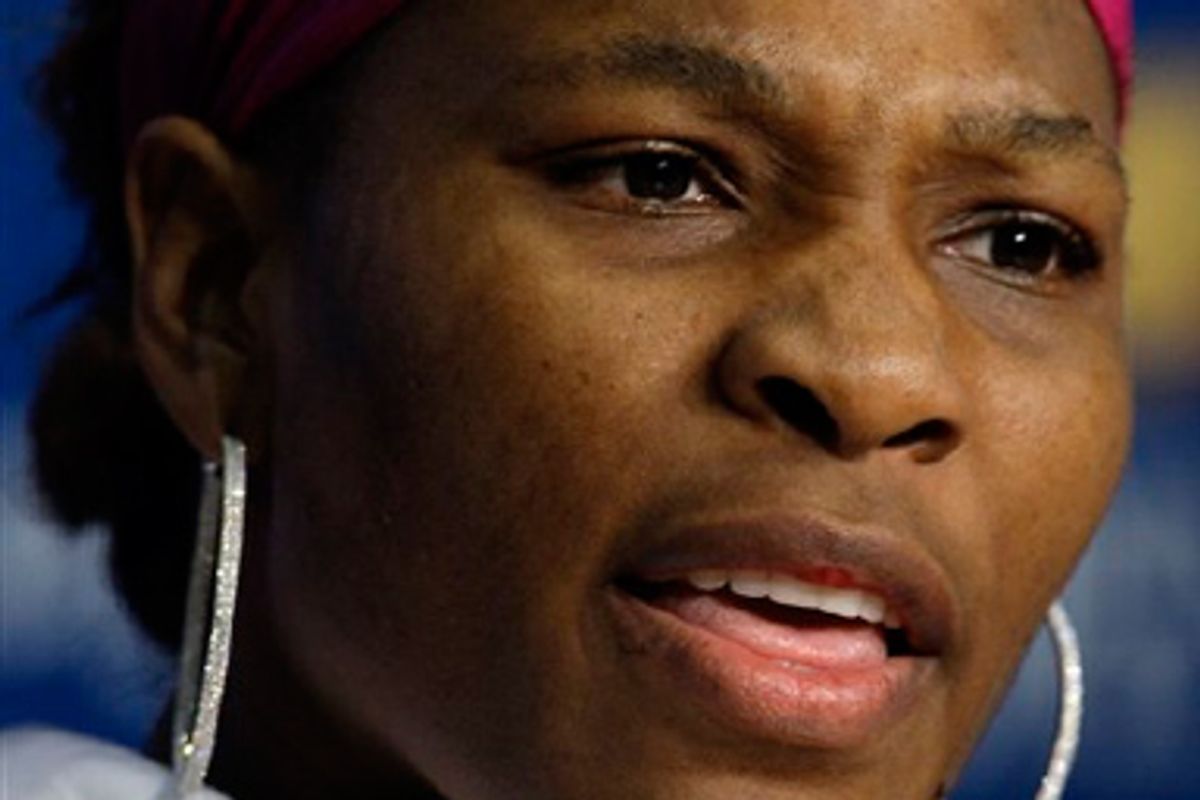 Serena Williams has been fined $10,000 for yelling at a line judge while playing in the semifinals of the U.S. Open -- plus another $500 for "racket abuse" earlier in the game -- and an investigation is open into whether Williams committed a "major offense," which would be grounds for suspension. But according to the New York Times, that's not good enough for some people; the controversy du jour is that Williams has not, in so many words, issued an apology.

Let's review for a minute here. At the end of a tense, close game, the line judge made a questionable call -- whether or not she correctly identified a foot fault, it's worth noting that many experts are saying such a call at that point in the game was highly unusual. Williams flipped out, reportedly yelling that she wanted to shove the ball down the judge's throat, which ... OK, that was not cool at all. But what interests me more is what happened afterward. The chair umpire, Louise Engzell, and tournament referee, Brian Earley, held a conference with the line judge. Williams approached them, and could be overheard saying -- with what appears to be genuine shock -- "I didn't say I would kill you! Are you serious? I didn't say that." Moments later, upon learning she'd been assessed a game-losing penalty, Williams composed herself, walked over to her opponent Kim Clijsters, and graciously shook her hand. On her way out of the game, she told reporters she didn't want to discuss the incident, but pointed out that she was hardly the first player in tennis history to rant at a line judge. The next day, she issued a statement saying, "Now that I have had time to gain my composure, I can see that while I don't agree with the unfair line call, in the heat of battle I let my passion and emotion get the better of me, and as a result handled the situation poorly. I would like to thank my fans and supporters for understanding that I am human, and I look forward to continuing the journey, both professionally and personally, with you all as I move forward and grow from this experience."

In short, she lost her temper, she regained control of it very quickly, she did not contest the ruling that gave the game to Clijsters, and she got herself out of there without any more drama. Then, after a good night's sleep, she acknowledged the obvious: She's human, she was jacked up on adrenaline, and she did a stupid thing.

But somehow, the story everyone's been talking about since Saturday night sounds a lot different. Bill Dwyre, writing in the L.A. Times, said, "Since the days of John McEnroe and maybe Ilie Nastase, there hasn't been much of this in tennis. This might have gone well beyond those days in severity." Really? Well beyond McEnroe's famous hissy fits?

Dwyre adds, "It was an embarrassment to a sport that has made good strides recently in expanding its niche. The U.S Tennis Assn. loves to talk about its 'grass-roots' programs, geared to getting rackets into young players' hands. Now those young hands have a role model for racket-smashing and bad language." Hmm, do you suppose we'd be talking about the potential effect of this on the grass-roots programs -- aimed at inner-city children from low-income families -- if it had been Clijsters, or a white man who went on a brief tirade?

Feministing's Samhita said on Twitter last night, "Can't help but think there is some racial coding in saying if Serena had any belief in the integrity of tennis, she wouldnt have 'acted out.'" Me neither. And every time I hear a white person exclaim that there is no racism here -- it's just that, you know, Serena Williams is an Amazonian, threatening, no-class angry black woman who needs to learn some humility -- I can't help thinking it even more. I mean, do you hear yourselves, fellow white people?

Then there's the sexism. Filip Bondy at the New York Daily News gets it, writing, "Serena Williams unraveled terribly, like ... well, like a man. Think about it. You've seen many male tennis players do something every bit as horrible as what Serena pulled on Saturday, but never a woman." Citing well-known meltdowns not only by McEnroe but Jimmy Connors, Andre Agassi, Ilie Nastase and Jeff Tarango, he says the furor over this incident "goes beyond etiquette, into the realm of gender roles. Serena's poor sportsmanship is a sort of breakthrough, proof that women athletes can behave every bit as irrationally as men. And because of that, it would be a mistake to punish Williams more than a man for the same actions." Of course, that's already happened. Not only did she lose a big game on a technicality, but her fine -- and the threat of suspension -- far exceed what Bondy describes as "the customary penalty: a tut-tut and a $1,000 fine."

Meanwhile, NPR is asking, "Is more punishment needed for Serena Williams?" with a poll showing 72 percent of respondents think she should be suspended. Sixty-nine percent of L.A. Times readers agree. And of course, the refrain in much of the reporting is: "Gasp! She has not apologized!" Former tennis player and TV commentator Mary Joe Fernandez told the NYT, "Once she reflects, I'm hoping she will apologize for her actions because as an athlete you have to find a way to keep your temper in check." Justin Gimelstob, who shares those credentials and is also a friend of the Williams sisters, adds, "The biggest issue is that afterward, she did not apologize and acknowledge her mistake." Former U.S. Open winner Virginia Wade says, "The only thing that I thought was strange was that she went into the press conference and didn't have any remorse."

What if Williams just isn't sorry? What would we make of that? For a brief moment, she behaved terribly, yes, just as many men (and, as Bondy points out, "even sweet Caroline Wozniacki") have done -- but the call was indeed dubious, and a minute later, the same judge was apparently telling higher-ups that Williams had threatened to kill her. I might have a little trouble getting over that myself. As Pritha Sarkar put it at Reuters' Left Field blog, "There is no excuse for the language or the tone she used against a woman who was simply doing her job, but can people at least understand the state of mind Serena found herself in?" Williams has, in fact, acknowledged that she screwed up. She recovered within minutes and didn't freak out when she was told that Clijsters had won the game. She's been penalized with the maximum fine they could slap her with on-site, and she's currently facing suspension and the loss of $455,000 in tournament winnings, all because she lost her temper for a few seconds. And people are still enraged because she hasn't said the words "I'm sorry," regardless of whether she genuinely feels remorseful?

Personally, I think it's refreshing that Williams is refusing to play along with the expected script here. We've all heard a thousand empty apologies from celebrities and athletes who have been caught acting like jerks. Does anyone really believe they mean something more than, "I'm sorry it happened on tape?" It's nothing but humility theater, meant to allow the public to feel superior to a high-profile gazillionaire for five minutes. And Williams won't give us that. She hasn't groveled for forgiveness -- in fact, she's confidently expressed an expectation that she'll get it from reasonable people, because she's human, she messed up, and it's over. And you know what? She's right. She'll be forgiven by anyone who actually gives a damn about tennis, because she's a phenomenal player with a long history of good sportsmanship. (Despite his wish that she'd apologize, Gimelstob added, "But that one moment doesn't indicate the type of person she really is. She's a great champion and has contributed a ton to the game.") How many of the people demanding further punishment and a public display of shame are even tennis fans?

Even if Williams owes that line judge an apology -- and yeah, realistically, she does -- she certainly doesn't owe one to the rest of us. She hasn't irreparably harmed the game of tennis, much less anything else that affects members of the public now calling for her head. She just lost her shit, for a minute, high on adrenaline at a crucial point in the game. It could happen to anyone. It has happened to many other players. (And you might notice that pretty much every time it does, the player in question waves a racket "threateningly," because, hello, they're already holding rackets. It's not like Williams stopped to pick up a deadly weapon on her way over to the judge.) So why are people who don't even follow tennis up in arms about this, demanding that Williams feign humility for our satisfaction, crying out that she must be punished as severely as possible? If you said, "Because she's a rich, powerful black woman who needs to be put in her place," I think you might just be onto something.