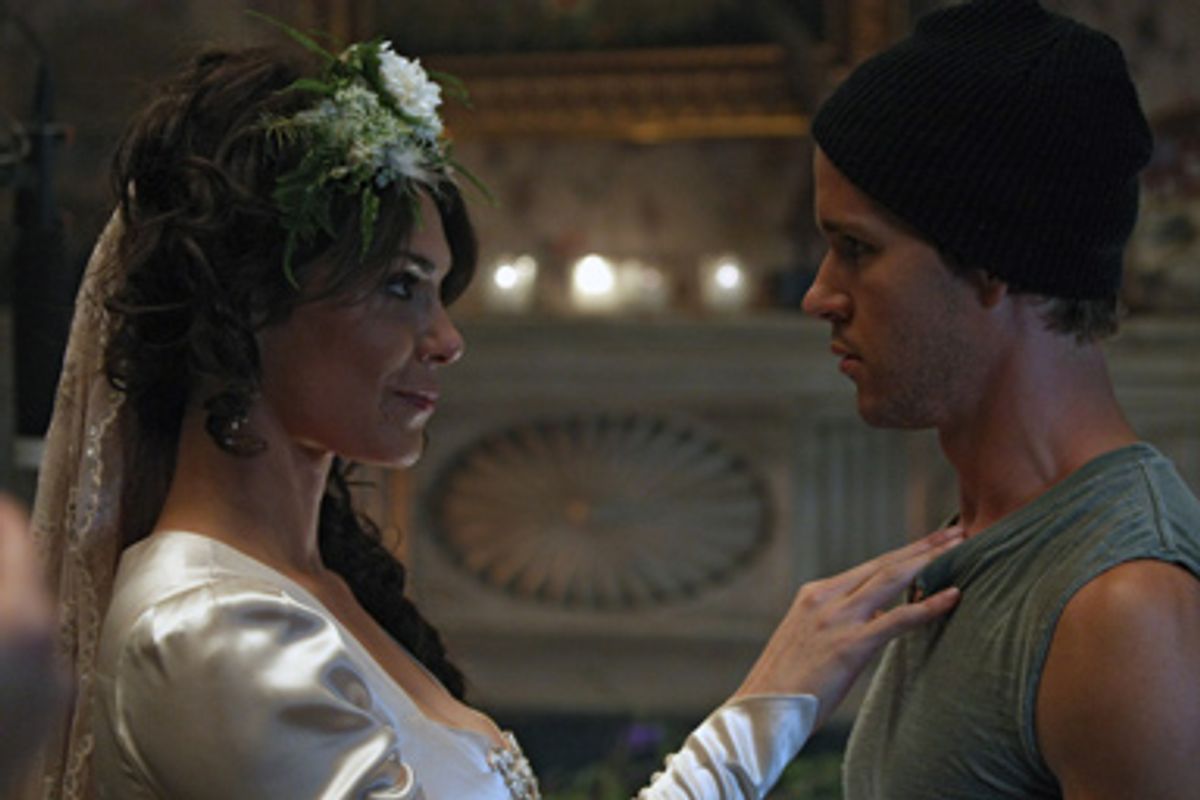 "I need you, and Sookie needs you to make this right."

Poor Bill the vampire! Dead for decades, and he's still reduced to asking Sam Merlotte for help in saving the people of Bon Temps from the chaos incited by Maryann, the maenad who's turned the town upside down.

Considering he's our heroine's main squeeze, you'd think that Bill (Stephen Moyer) might be the most powerful supernatural force in the picture every once in a while. But just like during the first season finale, when Bill was largely helpless to save Sookie (Anna Paquin) when she was threatened in broad daylight by serial killer Rene, now Bill finds himself depending on the shape-shifting of Sam (Sam Trammell) to help conquer the maenad.

"If I thought it was as easy as giving myself up to Maryann, I'd have done that by now. And what's to say she's going to stop at me?" Sam asks Bill. "Killers don't just suddenly quit killing. You oughta know that."

Hmm. Why is it that, even when Sam reminds us that Bill is the dangerous, haunted type, Bill still always seems vaguely emasculated, upstaged, overpowered, or humbled in the face of all of the forces beyond his control? Sookie may have played the doe-eyed ingénue to his foreboding mystery man in "True Blood's" first season, but lately she's starting to look positively formidable, as if she's destined for greater things. Undaunted by the nasty vampires of Dallas, unflinching witness to Godrich's death, and unruffled by Maryann's heart-devouring routine, Sookie only grows more imposing as Bill fades into the background. Meanwhile, Eric (Alexander Skarsgaard) a far more intriguing, bad boy of a vampire, is semi-obsessed with her, the vampire queen (Evan Rachel Wood) is intrigued by her, and Maryann (Michelle Forbes) is anxious to know what she is, exactly, and what gives her such power. How can poor loverboy Bill not seem the pale sidekick to his lady love?

Of course, by the time the second season of "True Blood" came to its predictably campy, chaotic conclusion on Sunday night, everyone, even Sookie, was looking a little pale. First there was Maryann's bloody, hedonistic ritual with its hilariously obnoxious send-up of the arbitrary stupidity of wedding traditions ("You're the maid of honor! You have to lick the egg!"). Then there was the moment we'd all been waiting for, when Sam finally punished Maryann for making the people of Bon Temps her human playthings.

Naturally we expected that Jason Stackhouse and Deputy Andy would only make a big mess of things, first by succumbing to Maryann's mind control, then by murdering poor confused, guilty Eggs and leaving Tara broken-hearted, lonely, and probably more bitter than ever. (What was the alternative? A happily married, relaxed Tara? This is a vampire soap, not a Disney movie.) At least under Maryann's power we caught a little glimpse of the sassy Lafayette we knew and loved before Eric had his way with him ("Worship him, bitches!" he instructed the half-crazed crowds at Maryann's sacrificial ritual).

And once the whole goofy, over-the-top maenad storyline lathered up into a great big egg-cracking, orgiastic mess, we knew we were in for a slow-motion Scooby Do ending:

"This town's a hell of a mess, and I'm man enough to know that I can't handle it myself," Sheriff Dearborne says to Deputy Andy.

"I am grateful that you would reveal your gift for the sake of the town," says Bill to Sam.

"It took me this long to realize it, but you suffer a lot more hiding something than you do if you face up to it," Sam says to Bill.

"I'm so sorry for bringing all this craziness into your house. I got sucked in because she made me feel like I was part of a family or something," Tara says to Sookie.

"Hey, you have a family," Sookie responds. "We're family. And tomorrow we're going to clean every single thing that monster touched in this house."

But that's "True Blood," isn't it? A queasy mix of sugary sweet love story, heart-sinking human tragedy and raunchy, gory madness, exactly the sort of twisted combination that has made Alan Ball's vampire dramedy the most popular show to air on HBO since "The Sopranos." Just as the morally upside-down mob microcosm captured our imaginations, so, too, does this dark (but often downright silly) world ruled by ignorant rednecks, self-righteous Christians and blood-sucking fiends. Yes, just when everyone's hugged and thanked their lucky stars and it looks like they'll all live happily ever after, some Yahtzee-playing vampire queen or pot-smoking demigod is about to roll into town and crush these sad little mortals under his/her/its merciless feet.

And where is Bill in all of this? In the last few scenes of the finale, we find him earnestly shaking in his shoes, waiting for Sookie to say she'll spend the rest of her mortal life as his lawfully wedded wife -- a union only legal in Vermont, don't you know. But Sookie – who appears to have noticed that she's awesome while Bill is sort of a wet rag of a man -- cringes and cries when faced with Bill's marriage proposal. She retreats to the bathroom to think it over for a minute. Seeing that Bill's diamond does look awfully nice on her hand, Sookie decides that she wants to spend the rest of her life with Mr. Boring, only to emerge to find Bill gone, with signs of a struggle! Bill has been overpowered, yet again!

Tune in next year to find out!