With "The Lost Symbol," his "Da Vinci" follow-up, Brown spins a wild Freemason conspiracy -- then never solves it 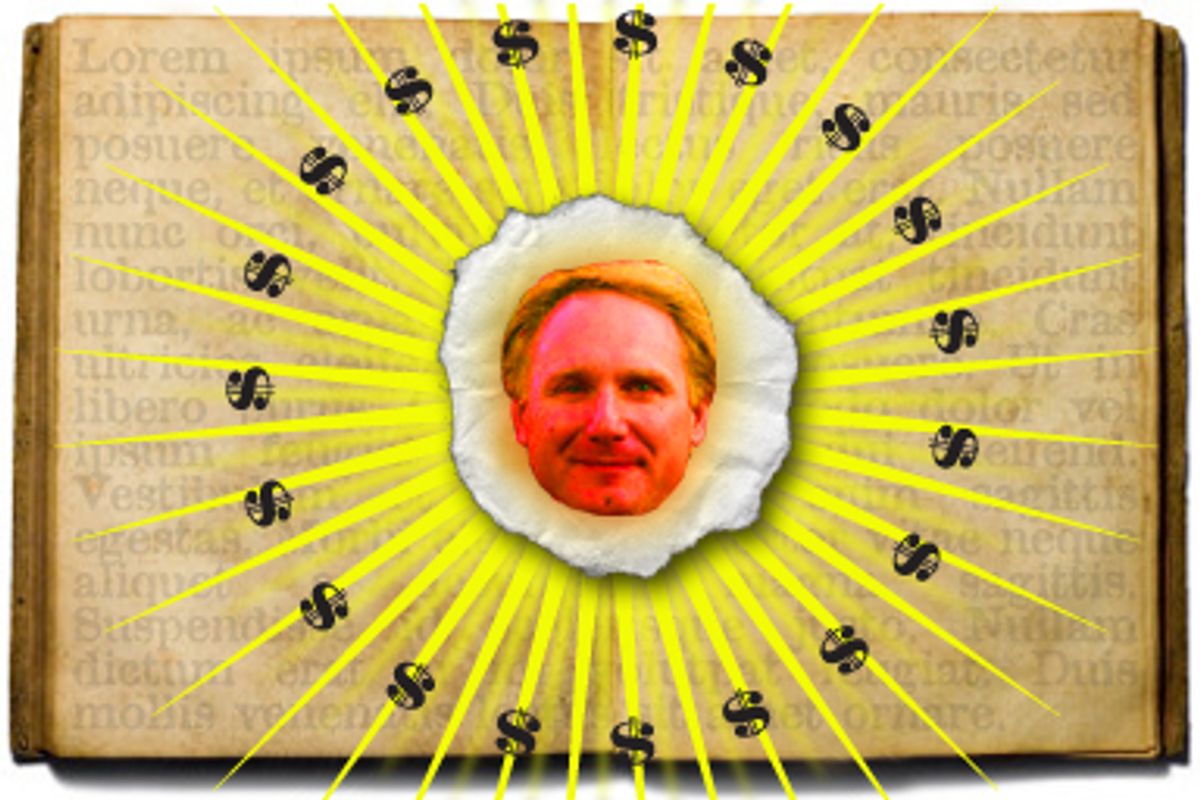 Let's face it, who really cares about Robert Langdon, professor of the (imaginary) discipline of symbology at a fictionalized (and apparently woefully indiscriminate) version of Harvard University? Who cares about those unfortunate patriarchs of the confidential class, one of whom always turns up dead or mutilated or both -- a martyr to his own secrets! -- at the beginnings of Dan Brown's breathless, treasure-hunt thrillers? Who cares about the academic babe, invariably a blood relative of the stricken patriarch, who inevitably materializes to accompany Langdon on the hunt and to play the admiring audience to his lectures on the aforementioned secrets? Sure, there's something kinda Oedipal going on in all this, in the way Langdon (40-something, but with a "toned physique"!) swoops in to rescue the academic babe along with Western civilization itself after the close-mouthed elitism of her dad/grandfather/big brother has failed, and in the way he demonstrates his enlightened, democratic, woman-positive attitudes in the process. But who even cares enough about the psyche of Dan Brown to contemplate the significance of that?

Conspiracy theory, not characters, made "The Da Vinci Code" the bestselling adult novel of all time. With that novel, Brown, previously a mediocre thriller author laboring in relative obscurity, hit upon the idea of a lifetime. Latching onto a popular but moderately difficult work of pseudohistory titled "Holy Blood, Holy Grail" by Michael Baigent, Richard Leigh and Henry Lincoln (more -- much more -- about that here), Brown streamlined the authors' argument that Jesus fathered a dynasty of French kings with Mary Magdalene into an airport page-turner easily understood by people who can barely read. "The Da Vinci Code" is "The Knights Templar for Dummies," with dashes of remedial art history, travelogues and digs at Christian orthodoxy tossed in to sweeten the brew.

But oh, how to follow it? Once you've undermined the doctrine of the world's largest religion and implied that most of the West's artistic and scientific geniuses were in on a vast plot, won't anything else seem a bit of a letdown? The formula has to be just right. Even people who don't ordinarily go for the obsessive complexities of conspiracy theory liked "The Da Vinci Code" because they saw it as anti-fundamentalist or pro-feminist or even just a way to make the obligatory sightseeing of a European vacation a little more exciting. Plus, as conspiracies go, the Holy Grail theory is easy for the masses to grasp: Light on the history, politics and theology, essentially it's a sex scandal in the Holy Family.

No wonder it took Brown so long to produce his follow-up, "The Lost Symbol." He had to find material as portentous, as purportedly earthshaking. It had to be "secret" -- otherwise there'd be nothing for Langdon to reveal -- and it had to be embedded in the iconography of fine art and architecture, so that the symbologist could triumphantly unmask the coded messages supposedly lurking in familiar masterpieces and monuments to his wondering companions. And lastly, it had to be locatable in a single place, since for all Brown's rhapsodizing about books as "the oldest and most precious of vessels" in "The Lost Symbol," his fiction is positively literophobic, frantically translating the quest for knowledge from a search through library stacks into a mad, inane race from statue to church to museum in search of clues. It's no surprise that Brown, pleading a "short attention span," delegated the research for "The Da Vinci Code" to his wife, who provided him with summaries of books like "Holy Blood, Holy Grail" so that he didn't have to actually read them.

Given this list of requirements, what else could Brown pick for his next book but the Freemasons and Washington, D.C.? Masonic rituals are deliberately shrouded in secrecy and esoterica, and Masons number significantly among our nation's founders (Washington, Jefferson, Franklin, Madison, and so on). Unlike the almost entirely mythical Priory of Sion (keepers of the Grail legacy in "The Da Vinci Code"), the Masons not only exist but are also genuinely fond of sprinkling their motifs (compasses, pyramids, double-headed eagles, the number 33, etc.) in paintings and architectural ornamentation. Washington is home to, among other things, the headquarters of the Scottish Rite, one of the more ritualistically elaborate Masonic bodies, housed in an impressive building complete with 33 pillars and two massive sphinxes.

But while Masonry helpfully supplies much of the necessary paraphernalia of a Dan Brown thriller, it's short on one key element -- a big secret. Yes, Masons must swear never to reveal the details of their rites to outsiders, but by now most sensible people realize these ceremonies consist of little more than grown men playacting with lambskin aprons and bones. Everyone knows Washington was a Mason, that he swore the first presidential oath of office on a Masonic Bible, that the pyramid on the back of the one-dollar bill has some Masonic significance, and so on. Big deal. Only paranoid kooks actually believe that the Masons are devil-worshippers or secretly run the world.

And Dan Brown is no paranoid kook. The Masons are the good guys in "The Lost Symbol," keepers of the flame, though as with the nonexistent Priory of Sion, you do have to wonder why they bother. It's hard to see what they have to lose, in this wide-open age, by going public. What they guard is something called "the Ancient Mysteries" and apparently they've been at it, in one form or another, for centuries. The Mysteries contain "the spiritual truths taught by the great sages," according to one aged Mason in "The Lost Symbol," yet by now even most Masons have forgotten these truths. Only a select inner circle, the 33rd degree of the Scottish Rite, grasps their nature and importance.

I could tell you how Langdon winds up embroiled in a search for these mysteries, which are supposedly concealed someplace in D.C., or about the obligatory freakish and sexually compromised antagonist (a tattooed eunuch) who threatens Everything. I could tell you about the official (an internal affairs muckety-muck from the CIA) who hassles Langdon but is too flagrantly ominous to really be the bad guy, or the shocking climactic reveal about the antagonist's motivations that any intelligent reader will see coming a mile away. I could describe the various chase scenes, which do demonstrate considerable improvement in craft over "The Da Vinci Code." But why bother?

The allure of "The Da Vinci Code" lies not in these rudimentary thriller conventions, but in the gradual revelation of the Grail conspiracy theory as the chases and unmaskings and double-crossings play out. The earlier novel's core secret really is startling to those who haven't heard about it before. Brown proposes a provable alternative history in which the claims of religious authorities are entirely overthrown, and even if that proposal is based on poppycock, the very suggestion strikes many readers as a breath of fresh air.

By contrast, the same readers are likely to find the enigmas at the heart of "The Lost Symbol" disappointingly abstract and familiar. Brown does try to freshen them up by linking them to cutting-edge science. The academic babe Langdon teams up with this time around, Katherine Solomon, is a practitioner of "Noetics," a New Age field seeking to prove that thoughts can, in and of themselves, change the physical world. Supposedly she has "created beautifully symmetrical ice crystals by sending loving thoughts to a glass of water as it froze." These activities and the "shocking new data" supposedly resulting from them are, she hopes, illustrating "the missing link between modern science and ancient mysticism." Katherine's work, conducted surreptitiously in a deserted sector of the Smithsonian Institute, is on the verge of demonstrating that the Ancient Mysteries are scientifically sound -- a prospect the tattooed maniac (for reasons not entirely clear) regards as catastrophic.

Much of this nonsense will be familiar to anyone who has seen the film "What the Bleep Do We Know?" or read the work of a journalist named Lynne Taggart. Both insist that recent discoveries in quantum mechanics somehow indicate that "consciousness" can effect changes in the material world -- claims that actual physicists indignantly dismiss. Katherine is supposed to have evidence proving the power of prayer and the existence of the soul, "Scientifically. Conclusively." (Brown is big on one-word sentences when he wants to be forceful.) But in this she is only playing catch-up with "the ancient mystics" whose works the Freemasons have hitherto concealed because their insights are "far too potent and dangerous for the uninitiated."

The exact nature of these insights and why nobody ever used them to make life in the ancient world a little less brief and brutal remains frustratingly vague. Where pseudohistory like "Holy Blood, Holy Grail" bombards readers with too much detail in order to spin an aura of credibility, pseudoscience prefers to throw some authoritative-sounding terms around and then quickly move on before you get suspicious. We're meant to think that Katherine or Robert or the various Masonic poohbahs they encounter could explain how to defy the laws of gravity and cure rabies with the power of positive thinking if they had a bit more time, but they're too busy being stalked by black helicopters or surviving an ordeal called Total Liquid Ventilation to get to that at the moment. In the meantime, surely the fact that Isaac Newton was "deep into numerology, prophecy and astrology" should suffice to prove how legitimate such studies are, right?

Still, it's not as if the preposterousness of "The Da Vinci Code" has put off many readers. If the mystery at the center of "The Lost Symbol" never quite gets solved, it's still surrounded with exactly the kind of feel-good folderol that readers love in a bestseller. From "The Celestine Prophecy" to "The Prayer of Jabez" to "The Secret," no one has ever gone broke telling Americans that they can have whatever they want if they only think sufficiently happy thoughts. In fact, pseudoscience could turn out to be even more profitable for Dan Brown than pseudohistory. It may not make for as good a story, but then again, that may be just one more thing that nobody cares about anymore.