The loneliness of Max Baucus

Months of negotiations got no Republican support for healthcare reform. But for some reason, Baucus still believes 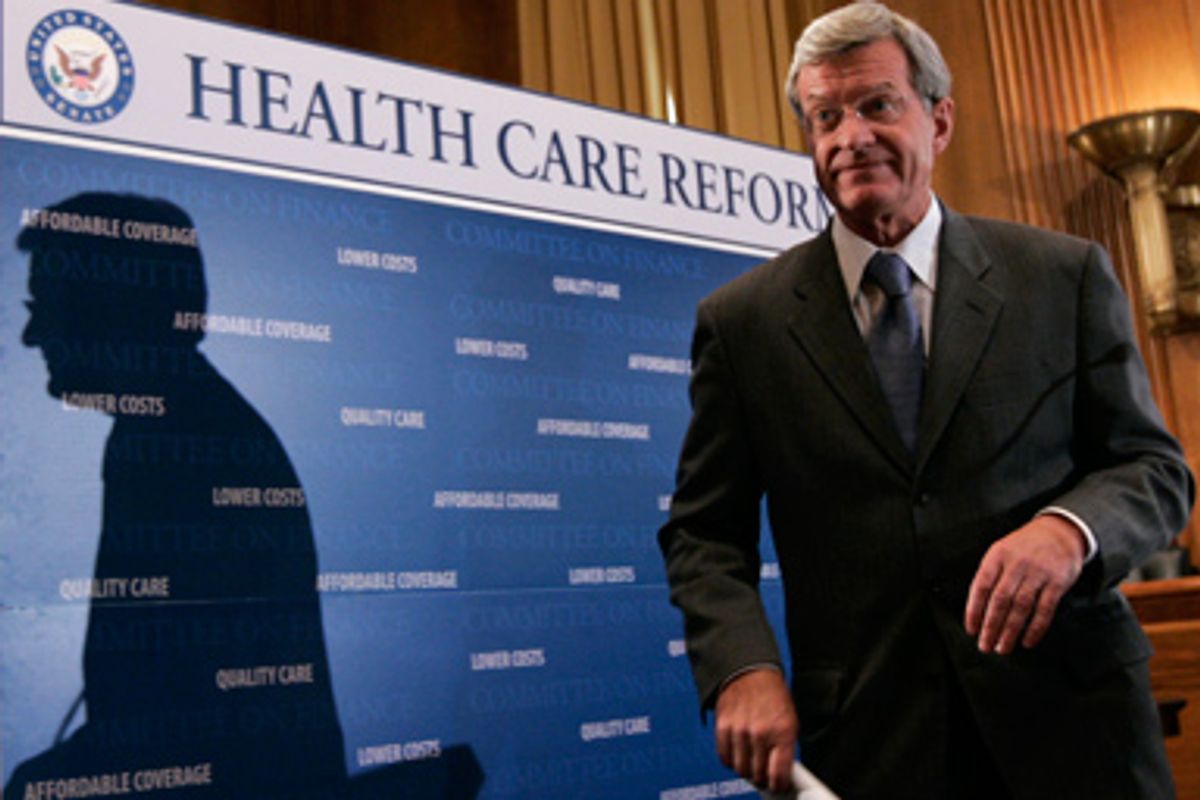 Chuck Grassley, it turns out, was the one who got away. For that matter, so was Mike Enzi. And Olympia Snowe.

In the end, after months and months of negotiations aimed at winning bipartisan support for a healthcare reform bill in the Senate Finance Committee, Max Baucus was all alone on Wednesday as he announced his draft proposal. He stood, looking lonely, in front of a backdrop that could have accommodated his entire so-called Gang of Six -- if, that is, the talks had worked out. As it was, he showed up as a Gang of One. But don't tell Baucus his work had come to naught. "No Republican has offered his or her support at this moment," he admitted. "But I think by the time we get the final passage in this committee, you'll find Republican support. This is a bill that should enjoy broad support."

Right now, though, it doesn't. Republicans -- including the ones Baucus has been painstakingly courting -- bashed it mercilessly. "This is the most complicated bill any of us have ever worked on," Enzi said in a statement. Grassley, whom Baucus wooed even as he asked Iowa Republicans for help defeating the healthcare bill, complained that no one would guarantee that Democrats would agree meekly to swallow whatever the Gang of Six came up with: "An overriding issue for some time has been the fact that members of the Democratic leadership haven't made a commitment to back a broad bipartisan bill through the entire process." GOP leader Mitch McConnell dismissed the plan outright: "Only in Washington would anyone think [it] makes sense, especially in this economy."

Many Democrats were even harsher. "We can do better," said Jay Rockefeller, a West Virginia Democrat who was cut out of the negotiations even though he's on the Finance Committee. Russ Feingold, of Wisconsin, called it "healthcare reform in name only." Another Finance Democrat, John Kerry, told me as he ducked into an elevator that "I just think there's some issues with the substance." Conservative Ben Nelson of Nebraska -- a target of the Baucus negotiations almost as much as the Republicans were -- couldn't even manage to offer much of an endorsement. "I've reviewed the summary of the summary," he said. "That's as far as I am right now."

Baucus had managed, it seemed, to produce bipartisan unity after all -- but against, not for, his bill. The whole point of the exercise had been to get Republicans on board, and they walked away. Baucus himself had said, last week, that a deal was there to be had, but "it comes down to a matter of political will." The GOP turned out not to have it. But Baucus still sounded surprised to finally learn that.

"We've debated this thing -- we've met over a hundred hours," he said. "I forget what the total is. There are no real policy deal-breakers. It just -- it's more getting more comfortable with what all this is."

The chief objections to Baucus' bill boiled down to this: It gives too much to insurance companies. It requires all Americans to have insurance, but the subsidies it would provide to help pay for it are less generous than in other versions of the legislation passed by other committees in the House and Senate. There's no requirement for employers to buy insurance for their workers, and the cap on premiums the bill introduced would still mean a family of four making $88,000 could pay more than $11,000 a year in insurance costs.

Still, for all the finger pointing by progressives over what they objected to in Baucus' draft, there was plenty in there that they could agree with; whole sections of the draft are likely to emerge, unscathed, after next week's debate. The bill -- like the three House versions, and the one another Senate committee approved -- would ban insurance companies from refusing coverage to people with preexisting conditions. It would order insurers to pay for preventive care, and it would open Medicare up to people making up to 133 percent of the federal poverty level, a higher ceiling than many states now allow. The draft would also begin to shift Medicare and Medicaid away from paying doctors based solely on how much treatment they provide, and instead use some evidence-based quality standards to determine some reimbursement rates.

But what made the draft's overall shape a little more surprising is that the policy document Baucus put out last year, and his own remarks over the course of this year, make it clear that his own personal inclinations are less moderate than the bill is. Baucus says he wants a public option to compete with private insurance companies, much like liberals in the House (and well over half of the Senate Democratic caucus), but the draft opts for state-based co-ops, instead -- possibly because North Dakota's Kent Conrad, one of the other Democrats in the Gang of Six, prefers them. How much purchasing power -- and, therefore, how much ability to force private insurers to lower their prices -- they would have is unclear.

Say whatever you want about the draft, but Baucus certainly tried hard to get a deal. He kept putting off Senate leadership, agitating for him to wrap up his talks, and the draft he produced bent so far in the direction of GOP demands that labor unions called it "deeply flawed" and said it "fails." Sources said the draft Baucus put out Wednesday actually shifted once it became clear Republicans weren't signing on, getting a little bit more progressive; if the GOP continues to hold out, Baucus probably won't object if Democrats on the Finance panel drag it even further to the left when they debate it in committee next week.

What the failure of the Gang of Six talks might mean, actually, is that whatever the Finance Committee comes up with winds up mattering less. When it looked like Baucus would produce a genuine bipartisan agreement, his vision of how the legislation should work might have been more influential; now, it's hard for Baucus to claim that only his bill will work.

The problem he ran into is that the Senate's usual way of doing things -- looking for bipartisan compromises, building wide coalitions to support legislation -- doesn't seem to be working on healthcare reform. Republicans, emboldened by the angry vitriol at town hall meetings over the summer (or scared by it), seem unwilling to play along. Out of some dogged belief that they'd come around, Baucus offered to give the GOP practically everything they asked for, and they still turned him down.

Why he stayed at it for so long, when the outcome seemed so predictable, almost doesn't matter anymore. Now Democrats may feel they have the political cover to go in a more explicitly partisan direction. (There's still a chance that Snowe could get on board with some form of reform legislation, but that's not certain.) No Republican could seriously claim Baucus didn't listen to their concerns; he can point to a long line of angry Democrats to prove he did just that.

"Even though [Baucus] has shown a willingness to jettison provisions important to many Democrats, Republicans have shown no interest after months of good-faith discussions," said Sen. Sherrod Brown, an Ohio Democrat and a strong supporter of a more liberal bill. "If we are going to provide Americans with peace of mind that their health insurance will not be priced out of reach, it looks like it is going to be up to Democrats to do so."

In the end, Baucus' attempts may still be productive to the reform cause -- even if they didn't get the GOP support he wanted.