How sorry is Joe Wilson? 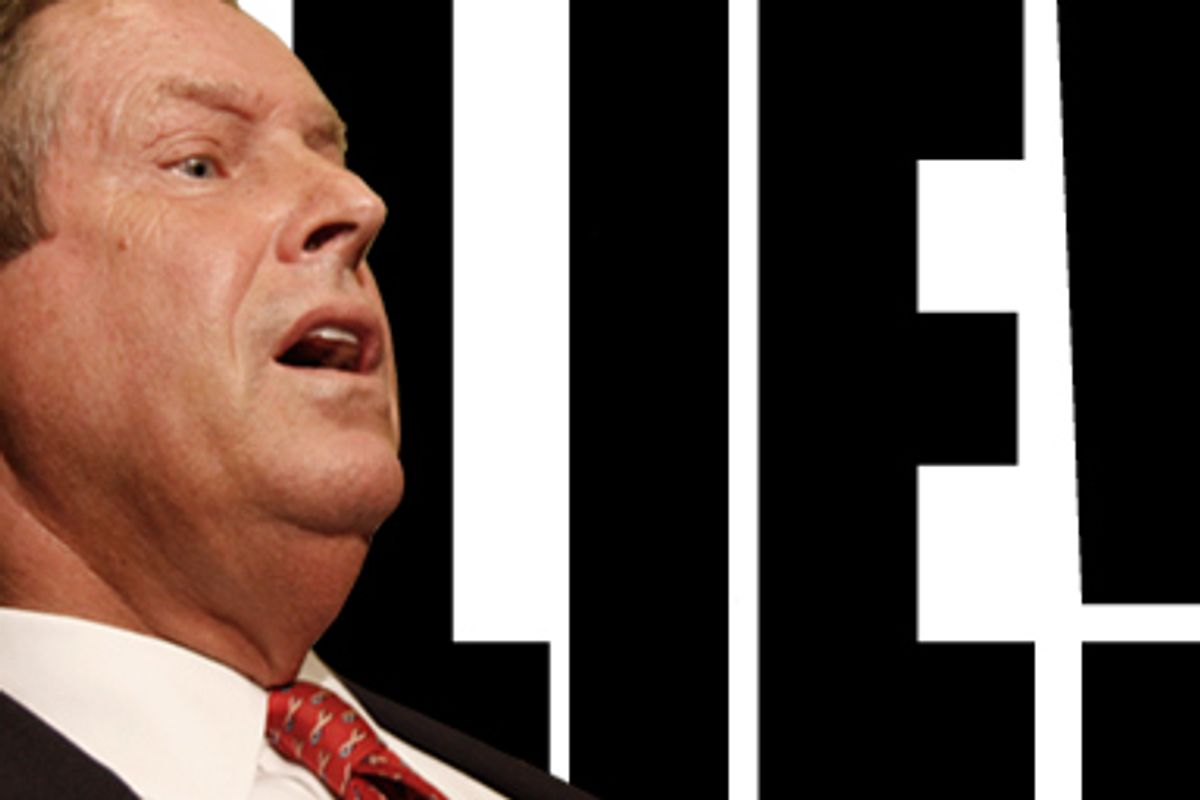 About half an hour after the House of Representatives voted to voice its objections to his angry shout at President Obama last week, Rep. Joe Wilson was walking through a Capitol tunnel Tuesday night, when he bumped into a fervent supporter.

"You were so great today," Rep. Michele Bachmann, a Minnesota Republican, told the South Carolina Republican, who's become a hero to the right since he interrupted Obama. She gave him a big hug and a warm smile for his troubles.

Bachmann's love, of course, wasn't enough to keep the House from chastising Wilson, even if the form the rebuke took -- a "resolution of disapproval" -- was essentially meaningless. Though Republicans reached new heights of melodrama in protesting the way the resolution threatened to soil Wilson's name, the vote carried no punishment. Like Wilson's shout, it seemed destined to become a political Rorschach test -- with Democrats insisting it was necessary, and Republicans insisting it wasn't, and both sides trying to capitalize on it to motivate their own supporters. (Also like Wilson's shout, it seemed unlikely to improve the opinion anyone watching on C-SPAN had of the nation's elected representatives.)

The resolution certainly didn't seem to have any lasting effect on the man it targeted. Wilson saw the exercise as a waste of time -- which he told me himself once it was all over. As the House emptied out after the vote, I spotted Wilson and some aides lingering by an elevator in the Capitol basement. After he finished a lengthy chat with a conservative radio host, we talked briefly as he headed back to his office, running into Bachmann along the way.

Sticking firmly to the GOP line, Wilson told me he was disappointed -- not in himself, of course, but in the Democratic leadership. "That there would be a diversion to play politics, to me, is just truly not in the interests of the country," he said. I asked him why he didn't just go apologize on the floor of the House, which Democrats said would have ended the affair promptly. Wilson said he felt the apology he'd made to Rahm Emanuel, Obama's chief of staff, and via press release the night of the speech, was enough. "To me, that acceptance was the proper course to take."

A week after the shout heard 'round the Beltway, it's not entirely clear how much Wilson actually regrets the whole thing. Overnight, he went from a little-known junior House member (and former aide to Strom Thurmond) to a celebrity, a frequent guest of Sean Hannity's who has raised, Republicans say, nearly $2 million in the last week. His Democratic opponent, Rob Miller, raised more than $1.5 million himself -- meaning anyone in Columbia, S.C., may be tempted to smash their TVs to avoid their commercials by the time next year's election rolls around. Both Wilson and Miller, and their political allies, invested heavily in Google ads tied to phrases related to the speech; if you search for "you lie," the phrase he shouted, you'll see a link to Wilson's campaign Web site, with a headline asking you to "stand for Joe, stand for truth."

"We've had so many people in the district I represent, throughout the state and throughout the nation be in touch with me, and they thanked me for my service," Wilson said, just before his staff pulled him away from me. "That was positive."

He's right about that -- the GOP and the right-wing base have lined up behind Wilson like he was Joe the Plumber. Wearing a red tie with white palmettos on it to represent South Carolina, Wilson sat on the House floor Tuesday, listening as his colleagues defended his honor and accepting slaps on the back from his pals. Somehow, he found time to speak up on his own behalf as the debate got started, but not to apologize for his outburst. Never mind that: One by one, Republicans took to the microphone to talk about their man anyway. "He's a devoted husband to his beloved Roxanne," Rep. Mike Pence of Indiana declared mournfully, as if the White House had sent Wilson off to face one of the nonexistent death panels to atone for his sins. Perhaps to avoid the spectacle of an endless parade of old white guys talking about why it was no big deal that an old white guy from the South had yelled at the nation's first black president, the GOP's list of speakers drew heavily from the women in its ranks: Candice Miller, of Michigan; Cathy McMorris Rodgers, of Washington; and Ginny Brown-Waite, of Florida, all spoke.

Republicans managed to use far more time calling the vote a waste of time than Democrats did supporting it. Only Majority Leader Steny Hoyer, of Maryland, and Majority Whip James Clyburn, of South Carolina, spoke about the resolution. Both stressed that it was simply a matter of enforcing House rules and protecting civil discourse, though Clyburn's rhetoric was a little more ferocious than a simple procedural matter would seem to call for. "When one of us, while seated in a formal session, severely violates the rules of this body by shamelessly hurling accusations of mendacity toward the president of these United States, our commander in chief, and refuses to formally express remorse, we -- at a minimum -- are duty-bound to express our disapproval," Clyburn said. He let seven Republicans speak, unchallenged, then summed up briefly just before the vote. "Silence gives consent," Clyburn said. "We can't be silent in this matter, because we do not consent to the behavior of Mr. Wilson." The Democratic majority on the House Rules Committee coyly published a new set of guidelines for debate just before the Wilson vote, reminding lawmakers that the chamber bars members from calling the president a liar.

By the time the vote came, though, Republicans -- who were worried about the fallout from Wilson's rude shout last week -- were allowing themselves to hope that Democrats had overplayed their hand. More than two-thirds of voters who heard about the incident were opposed to what Wilson did, a new Gallup poll found. But the White House didn't seem interested in touching the vote at all; spokesman Bill Burton called it "House business." GOP aides pointed out that Democrats had agreed to change proposed healthcare reform bills to make it even more clear that undocumented immigrants aren't entitled to benefits under the legislation -- the exact issue Wilson was so fired up about last week.

"I think he thinks -- and most South Carolinians agree -- that he's apologized enough," said Richard Quinn, a GOP consultant in Columbia who has worked for Wilson at times, though not at the moment, and who's known him for decades. "They're trying to make him grovel."

And the shout touched deeper nerves in the country than a simple violation of House decorum might have. The spectacle of Wilson yelling at Obama, so soon after the angry town halls around the country, has some Democrats wondering if some of Obama's opponents simply can't accept the idea of a black president; Hoyer, speaking to reporters before the vote, said the attacks against this administration were unusually ferocious, which might be racially motivated. Some elements of the right have hardly been subtle about trying to stir up racial resentment of Obama. But Quinn (whose own background doesn't exactly make him an expert on race relations) said any notion that there was a racial element to the dissent from Wilson and other Republicans was nonsense. "Ah, the race card," he said. "The idea that any criticism you make of President Obama is somehow racially motivated -- I think people are just tired of that old canard."

There might be a hint of false bravado in the GOP defense, though. A poll last week found Wilson's approval rating had slipped to 41 percent, and that Miller -- whom Wilson defeated by 8 points last fall -- was ahead, 44-43. Obama's own polling has ticked up since his healthcare speech and Wilson's shout. The resolution Tuesday may not wind up stinging Wilson too badly in the end. But GOP lawmakers may still think twice before they start shrieking at Obama next time around.