Obama gets the Clinton treatment 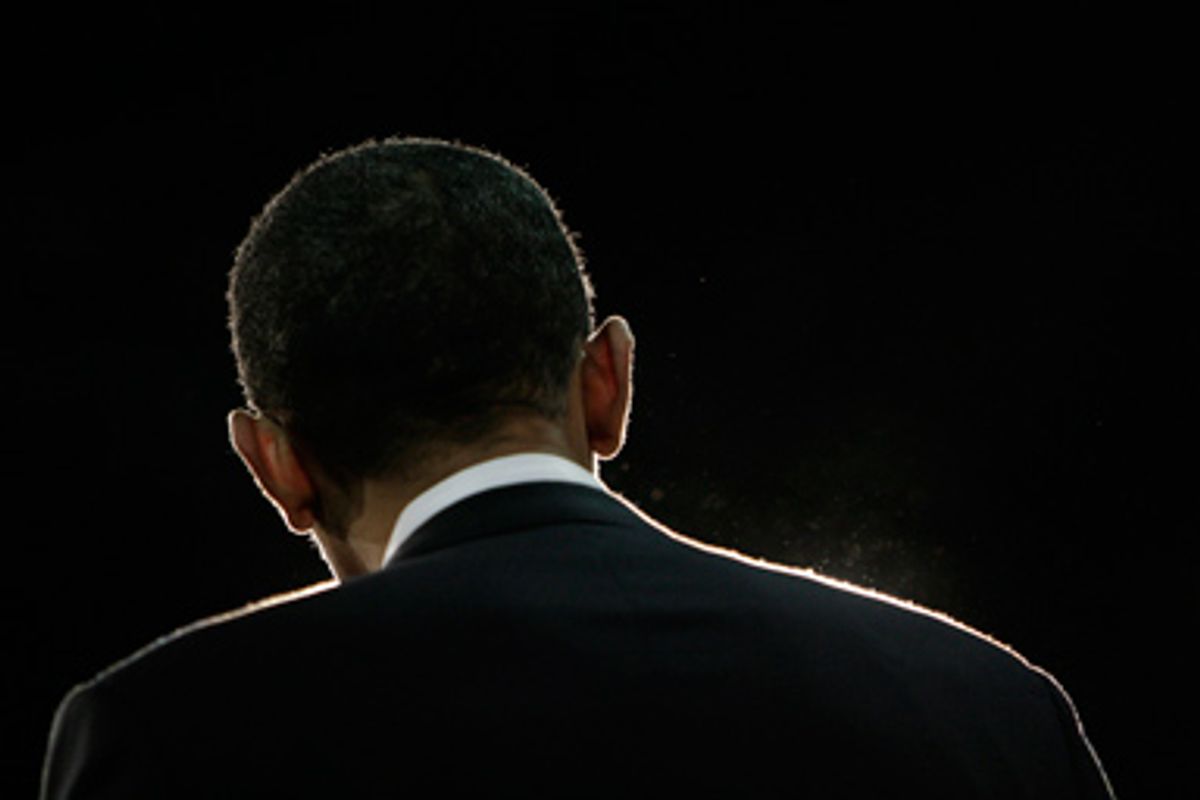 From a political standpoint, the worst thing about blaming President Obama's perceived difficulties on racism is that there's not a damn thing anybody can do about it. Determined bigots can't be shamed, while many see invoking race as more an excuse than an explanation.

Democrats who cry racism risk looking like whiners fearful they're losing the argument. Not to mention illogical. If Obama's approval rating among white voters has dropped from 63 to 43 percent, as the Los Angeles Times recently documented, it's not because they suddenly heard about his African father.

Nor should there be any reason to panic. As Joan Walsh has pointed out, 43 is the exact percentage of whites that supported Obama in 2008. Rep. Joe Wilson's, R-S.C., rude outburst during the president's speech to Congress spoke for itself, along with his longtime support for flying the Rebel flag over South Carolina's capitol.

No, Democrats won't win South Carolina's electoral votes in 2012. Nor Alabama's or Mississippi's. This should not come as a shock.

Besides, there's absolutely nothing new about the abuse directed at Obama. Pundits like the Washington Post's Colbert I. King, as my friend Bob Somerby never tires of pointing out, have arrived rather late at the party.

"There's something loose in the land," King opines, "an ugliness and hatred directed toward Barack Obama, the nation's first African-American president, that takes the breath away. The thread of resentment is woven through conservative commentary, right-wing radio and cable TV shows, all the way to Capitol Hill."

So where was King when Bill and Hillary Clinton were accused of murder by Rush Limbaugh and in videotapes peddled by the Rev. Jerry Falwell? The latter's sanctimonious mug nevertheless continued to appear constantly on network TV talk shows as an honored representative of America's devout Christians.

(I once got to ask Falwell, on camera, if the Ninth Commandment against bearing false witness was more or less important than the Sixth, forbidding adultery. He had little choice but to affirm that Scripture accorded them equal gravity. He alibied that he didn't know if the grotesque charges in "The Clinton Chronicles" were true or not.)

How about when Democratic nominee Al Gore was depicted as a fraud and serial liar through the use of phony allegations ("invented the Internet") and manufactured quotes on the front page of, yes, the Washington Post? Where was King then? Studiously polishing his fingernails, evidently.

The same is true of establishment pundits such as the New York Times' Maureen Dowd and Frank Rich, who participated gleefully in sliming the previous several Democratic candidates. (Dowd and Rich invented the myth that Gore falsely claimed to be the inspiration for the novel and movie "Love Story.") So now they don the shining armor of multiculti liberalism? Please.

"King and the rest of his cohorts drank the Kool-Aid during (the 90s)," writes Somerby. "Now, they pretend that the era never occurred -- and they express their vast surprise when the same lunacy is aimed at Obama. They are amazed to see what's being said about this new Democratic president. And they diddle their cowardly brains: It must be his race, they proclaim."

Actually, I'd bet a lot that Rep. Joe Wilson's a big Condoleezza Rice fan -- or would claim to be. And sure, we left-leaning intellectuals know how to deconstruct that pose; I sometimes think detecting covert racism must be all they teach in American universities anymore. In my day, we searched for hidden phallic symbols in Emily Dickinson poems.

But I digress. It's important to remember that the same hysteria attended FDR's creation of the New Deal. America was going communist! Abandoning the Constitution! Casting aside our sacred freedoms! That's how the GOP's Henny Penny faction reacted to Social Security.

Panic may abate after Congress passes healthcare reform -- although if Obama signs a law requiring mandatory health insurance without a public option to restrain industry price gouging, there could be hell to pay.

But unease runs deeper. In my hometown paper today, there's word of a factory manufacturing stainless-steel sinks shutting down, a sawmill cutting production to one day a week and Eli Lilly & Co. announcing the elimination of 5,500 jobs.

Meanwhile, Obama's on Wall Street, talking about financial reforms, which mainly reminds people that these jokers damn near gambled the economy away, took billions in taxpayer bailouts, then kept awarding each other obscene bonuses as if nothing had happened. Fear and anger won't diminish until sawmills and factories start hiring again.

Alas, it appears to be considered bad form in the Obama White House to keep reminding voters that it was President George W. Bush's economic and tax policies -- the very miracle cures now championed by Fox News celebrities, politicians like Rep. Joe Wilson and "Teabaggers" alike -- that caused this economic Katrina to happen.

It's the economy, stupid.