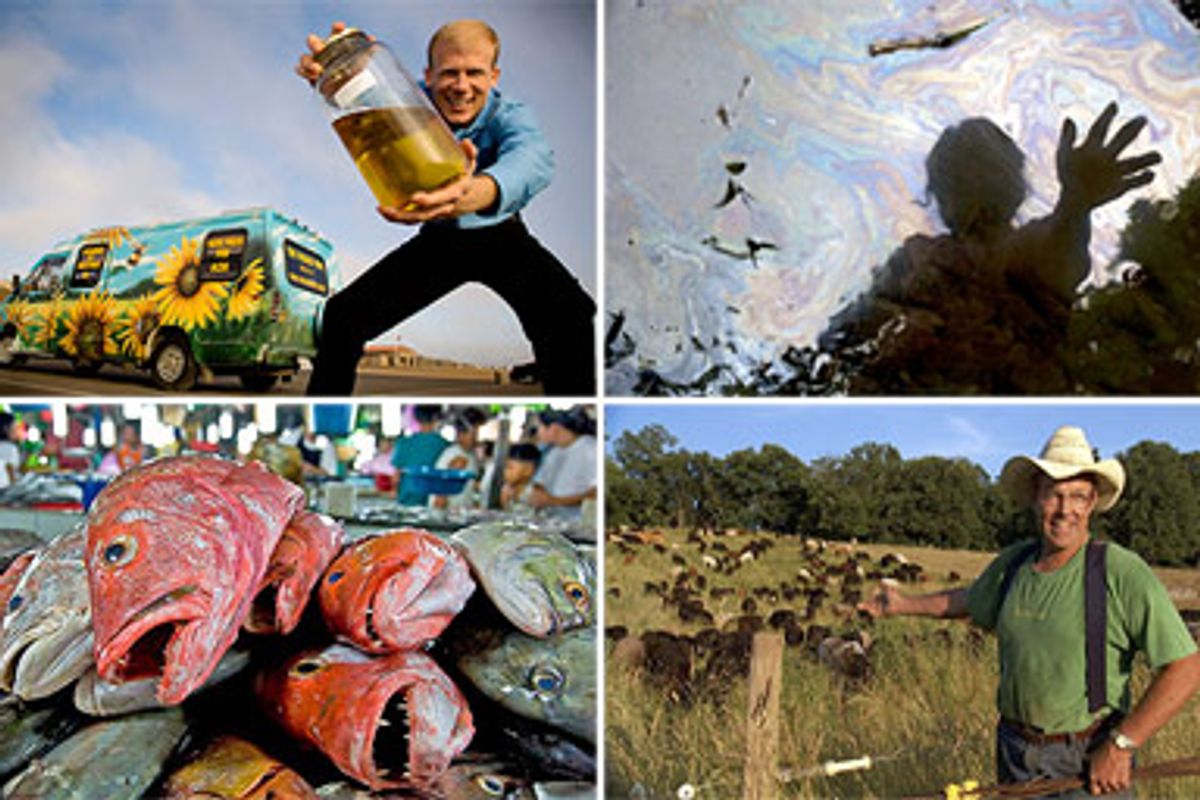 Stills from Fuel, Crude, Food Inc and The End of the Line
-- Clockwise from top left, images from "Fuel," "Crude," "Food Inc." and "The End of the Line"

I say this from the bottom of my heart, with deep conviction: "An Inconvenient Truth" changed the world. Did the Davis Guggenheim-Al Gore PowerPoint-based Oscar winner mark a turning point in global climate change, and the beginning of a carbon-neutral future? Oh, that. I have no idea about that. But it sure changed the world of movies. As any successful film is likely to do, "Inconvenient Truth" established a template for other eco-catastrophe documentaries to follow, and inspired a legion of well-intentioned emulators, wannabes and copycats.

Across the filmland economy, funding dried up for zombie-stripper flicks and Iraq war docs alike, and this year the eco-doc floodgates opened. Filmgoers in 2009 have been barraged with feel-bad flicks, each of them assuring us that the dire plight of the endangered blue-tailed skink, e.g., is dooming our grandchildren to lives of poisoned, skink-free grimness and slavery, and that it is the Unique Responsibility of Our Generation to Do Something. (Cut to mid-level celebrity, say, Eliza Dushku, without much makeup on: "I always thought that skinks were, like, these pretty lizards who lived in my mom's flower pots. I was like everybody else: I didn't understand the ancient wisdom of a simpler time! When you're on the Hollywood Freeway with a triple latte, you're just not confronting the way skinks are bound with the future of our planet!")

I jest, but only sort of. The post-Gore wave of eco-docs has produced some fascinating, information-rich and occasionally beautiful filmmaking, but it also threatens to cancel itself out in a cacophonous roar of competing voices. Can you tell "Earth" apart from "Earth Days"? Is "Food Inc." a sequel to "War, Inc."? (And when is "Sex Inc." coming out?) Most of these movies bring life to the phrase "labor of love," resulting from years of dedicated work and sacrifice at starvation wages. Their directors and producers have defied the odds in getting them released at all, and most have gone on to defy conventional release patterns: They hopscotch from one film festival to the next, screen in church basements and community centers, self-distribute on DVD or online.

Some of these movies will never "succeed," according to the film industry's standards, and they vary enormously when it comes to coherence and cinematic quality. Some are genuine outsider projects, some are made by prestigious documentarians and some are corporate attempts to cash in on eco-chic. But they all represent the tip of an extremely large iceberg, and reflect the fact that environmentalism has become a mass-scale, grass-roots-based movement that can't be controlled by politicians, policy wonks or talking heads. In that sense, maybe these movies will change the world -- but only if you know which ones to catch and which ones to skip. Herewith, Salon's exclusive user's guide to the eco-docs of 2009.

"Fuel" Activist-cum-filmmaker Josh Tickell spent 11 years of his life on this film, but as he appears to have had a blast driving around the country in his goofball, biodiesel-powered van, I suppose it's all good. Pushing two hours in length and chaotically structured, "Fuel" is a high-spirited, pseudo-encyclopedic tour of everything that's wrong with America's energy policy and how it all could be made right through a combination of biodiesel, wind and solar power. Maybe his arguments aren't all as convincing as they look at first glance, but Tickell gets full marks for making an eco-doc designed to uplift and inspire -- it's the Viagra of green movies!

After taking his film (and his crunchy-power vehicles, including a new one fueled with algae) to innumerable film festivals -- and getting short-listed for the '08 documentary Oscar -- Tickell finally has a theatrical distribution deal. "Fuel" opens this week in New York, San Francisco and Washington; and Sept. 25 in Los Angeles and Philadelphia, with lots more cities to follow.

"Crude" Not an eco-doc in the classic sense, Joe Berlinger's fascinating cinéma-vérité exploration of the $27 billion pollution lawsuit filed against Chevron by indigenous groups in Ecuador shares the same consciousness-raising goals and aims at the same audience. Berlinger's fly-on-the-wall methodology ensures that there's plenty of ambiguity here, and he goes to great lengths to include Chevron's point of view (legalistic and inane as it may be). A meaty process film that captures the intersection of global petro-politics, law, inequality and celebrity, "Crude" is thought-provoking and profoundly unsettling. It most definitely does not leave you thinking that everything will be OK if you make your own diesel fuel out of corn husks scavenged from Dumpsters.

"No Impact Man" New York couple Colin Beavan and Michelle Conlin, both writers, decide almost on impulse to transform their lifestyle such that they have near-zero environmental impact, meaning no TV, no air conditioning, no product packaging, no food grown outside their home region, etc. (Yeah, yeah -- no toilet paper either.) The result was Beavan's fascinating blog and just-published book, along with this highly entertaining documentary by Laura Gabbert and Justin Schein, which captures both the problems attendant on worm-composting and lack of refrigeration in the Manhattan summer (more maggots than a Dario Argento movie!) and also the reality-TV-style psychodrama of the Beavan-Conlin marriage. Beavan tends to drive people nuts, while the self-effacing shopaholic Conlin is irresistible.

"The End of the Line" Traveling from the tuna markets of Tokyo -- where some wholesalers reportedly have tons of that delicious red meat frozen against future shortages -- to the streets of London, the straits of Gibraltar and the coast of Senegal, British director Rupert Murray paints a dire but colorful portrait of the global overfishing crisis. A thoroughly depressing catalog of how completely we have devastated the world's oceans, "The End of the Line" argues that many factors have combined to cause a near-catastrophe: rising populations and widespread poverty in the developing world, coupled with the rising popularity of seafood in the metropolitan West and the explosion of high-tech methods for finding and catching ever more fish. Late in the film, some hope is offered: If we can limit our appetite for seafood, especially the large and delicious ocean fish, most species can still recover.

"Food Inc." This eye-opening agitprop doc about the true costs of cheap, corporate food, a collaboration between director Robert Kenner and writers Eric Schlosser ("Fast Food Nation") and Michael Pollan ("In Defense of Food"), is one of the signal cinematic moments of 2009. Although compared often to "Inconvenient Truth," "Food Inc." represents a much earlier phase of activism. As Pollan said when I interviewed him, the local and organic food movement is about where environmentalism was 40 years ago, just before the first Earth Day. A complex and layered attack on agribusiness and its transformation of America's food economy, Kenner's film both recognizes that corporate food production has had obvious benefits for consumers and argues that in the long run it's unhealthy for everybody. Alternately horrific, humorous and inspiring, "Food Inc." continues to play around the country as an organizing tool for locavores and organic-food mavens.

"At the Edge of the World" This odd, breathtaking high-seas adventure follows the eco-pirates of the Sea Shepherd Conservation Society (originally a Greenpeace splinter group) as they pursue the Japanese whaling fleet in the ocean off Antarctica. Deliberately controversial, and likely to alienate at least as many viewers as it delights, Dan Stone's doc makes an intriguing companion piece to Louie Psihoyos' vastly more respectable dolphin doc, "The Cove" (see below).

"The Cove" This blend of James Bond-style adventure and Jacques Cousteau-style underwater discovery is beautifully photographed, thematically explosive and often surprisingly funny. It's a smashing filmmaking debut from longtime nature photographer Louie Psihoyos, so why has it underperformed at the box office? Could be that scene where we watch hundreds of dolphins slaughtered in a secret Japanese cove, but I'm just guessing. Still, Psihoyos and his collaborator and star, longtime dolphin activist and former "Flipper" trainer Ric O'Barry, have accomplished at least some of their goals -- this year there was no dolphin massacre in Taiji, Japan, and dolphin meat is off the local school-lunch menu. Definitely a contender in this year's docu-Oscar race.

"Earth Days" A fascinating film with a concept that's difficult to summarize, ace documentarian Robert Stone's latest offering feels like a voyage into a Thomas Pynchon-style alternate reality: One-tenth of the American population demonstrated against pollution and environmental destruction; a 36-year-old ex-Jesuit seminarian whose platform included "exploring the universe" was elected governor of California and appointed an astronaut-turned-hippie as his science advisor; a female college student became an overnight celebrity with an anti-childbirth commencement address titled "The Future Is a Cruel Hoax"; a Republican congressman became the leading environmental exponent in Washington; and the president ordered solar panels installed on the White House roof. Of course it all actually happened, during the now-forgotten historical period before and after the first Earth Day, in 1970. In telling the stories of those people and their era, Stone simultaneously laments the road not taken and suggests we can still learn from it.