Jennifer Aniston's movies are middling. Her talent is questionable. Why can't we get enough of her? 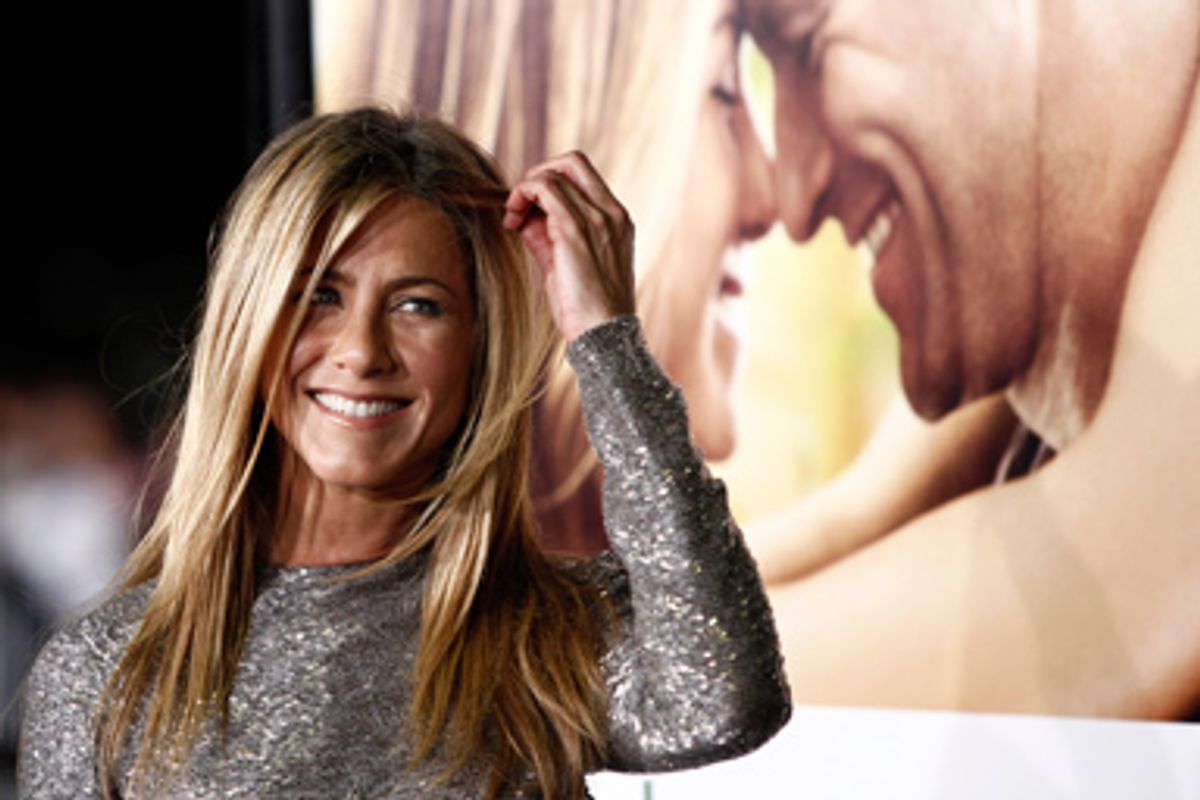 Why do we love Jennifer Aniston? It's hard to count the ways.

The woman best remembered as the perky, fluttery Rachel Green on "Friends" has done little of note since the show ended in 2004. The promise of her 2002 performance in Mike White’s "The Good Girl" -- in which she played a supermarket cashier suffocated by her staid life, a kind of modern-day Madame Bovary figure -- was never realized. Instead, one of the most famous actresses of our day has been stuck in a rom-com rut, portraying the same character over and over: quirky, adorable women who are always unlucky in love, the most recent example being Eloise, a florist who falls for a widower self-help guru, in "Love Happens," opening on Friday. Though several of her films have been box-office successes ("Marley & Me," "He’s Just Not That Into You"), they have also been critical flops. In her one meaty role in recent years, as the pothead Olivia in Nicole Holofcener’s "Friends With Money," she was miscast -- too young to play alongside Frances McDormand and Joan Cusack, the one false note in an otherwise on-pitch film. Her gifts as an actress are in no way commensurate with the enormousness of her fame. Her major career accomplishments, to put it bluntly, are a rigorously toned body and a vast constellation of tabloid magazine covers.

But we do not love Jennifer Aniston for her acting ability, nor for her success. We love her for her failures. We love her because she appears, so glaringly and consistently, as a kind of endearing loser. Her seminal loss, of course, was sexiest-man-alive Brad Pitt, as anyone who has set foot in a supermarket since 2005 knows. According to tabloid rumor, the break occurred at least in part because Aniston put her career above all else. (Unlike Angelina Jolie, whose primary tabloid narrative is one of balancing seven children, a passionate partnership with Pitt, a full career and philanthropic work, all while zipping around on a motorcycle.) “A man divorcing would never be accused of choosing career over children,” Aniston told Vanity Fair in her first interview as a divorcee. “That really pissed me off. I've never in my life said I didn't want to have children. I did and I do and I will!” Four years later, the children, like the roles in smart movies, have yet to materialize. If Pitt had left Aniston with a brood, the dominant line on her would surely be different -- we would not think of her as the poor lonely girl, bereft and barren.

The tabloids would have us believe that Aniston’s fate is no one’s fault but her own. A maddening August cover story in Us Weekly (“Why Bradley Chose Renee”) purports to explain why heartthrob du jour Bradley Cooper selected Renee Zellweger over Aniston (his co-star in "He’s Just Not That Into You"), as though choosing between two women were as easy as choosing a piece of pie from a rotating display case. “One insider” describes Aniston as “not natural … Everything is an act -- an act of her wanting people to think she is not insecure and is having a good time all the time, which just isn’t the case.” Zellweger, by contrast, is portrayed as a model of “authenticity.” If there is any truth to be found here, it may be that Aniston is looking for love in the wrong places. She doesn’t appear to understand, for instance, that it’s generally a bad idea to date one’s colleagues, especially when they are co-stars on movie sets (in addition to Cooper, see Vince Vaughn and Gerard Butler). Or that a musician eight years your junior may not be the surest bet (see John Mayer). In an article about the “whispers of an off-camera romance” between the actress and Butler on the set of the upcoming movie "The Bounty," “sources close to Aniston” tell Us Weekly: “She always falls for whoever is close by. It’s not real love.” Who knows if any of these stories are true, but there is a whiff of desperation about Aniston; at 40, her fertile years presumably on the wane, she seems always on the hunt for someone, yet almost willfully picking unsuitable men.

But let’s admit it: These are the reasons we love her. Her very lack of success -- in romance, in childbearing, in making films that are more than trifles -- makes her appealing. Jennifer Aniston allows the average person with a bad marriage, or bratty children, or no relationship at all, to feel better about his or her plight. If this rich and famous woman has troubles of her own, then truly no one is spared. In these dark days of domestic decline, does it come as a surprise that America’s sweetheart is a 40-year-old single woman without children, whose messy love life lets us feel smug about ourselves? Is this sick? Well, yes, sort of. But celebrities have long filled this sacrificial role.

Should we feel sorry for Jennifer Aniston, tabloid victim? She is obviously aware of her lovelorn appeal. In fact, she seems canny about making it work to her advantage. “[I]f I’m the emblem for this is what it looks like to be the lonely girl getting on with her life, so be it,” she recently told Elle Magazine. “I can make fun of myself, and I’ll bring it up as long as the world is bringing it up.” She no doubt understands that a viewing public who likes her -- who, indeed, feels not unlike her -- will go see her films. One has the sense that, perhaps for this reason, she selects roles that augment her hapless persona. “I have a strange parallel with movies I was doing and my life off-screen,” she joked, with discomfiting directness, while accepting an award in June. “First, it was 'The Good Girl' ... which evolved into 'Rumor Has It,' followed by 'Derailed.' Then there was 'The Breakup' ... if anyone has a movie called 'Everlasting Love With an Adult Stable Man' that would be great!”

It can’t possibly be the case that Aniston is offered only lead roles in romantic comedies. (If it is, her options may soon change, as she and friend Kristin Hahn have formed a production company, Echo Films, the mandate of which is “to develop movies with strong female characters.”) Either she is more comfortable playing these sorts of roles, or her career choices have been part of a strange, holistic approach in which her off-screen identity and on-screen characters are intended to reinforce each other. Perhaps she knows that her plain-vanilla movies are not her fans’ primary interest, and only by portraying characters that reflect some aspect of her intimate life will she offer audiences a unique and compelling narrative. “I certainly try to access my personal life when I’m doing my job,” she told Parade magazine. “But you know what they say, ‘Art imitates life, life imitates art.’” (Next on the Echo Films lineup is a romantic comedy about artificial insemination, the aptly if horribly named "The Baster.") In interviews, Aniston is constantly invoking this art-life thread. The formula, such as it is, appears to be working for her: In Forbes annual list of “Top-earning actresses,” Aniston came in second, having earned $25 million between June 2008 and June 2009. In first place, ironically but not surprisingly, was Angelina Jolie, providing proof as concrete as any that, almost five years out, both actresses have found their greatest, career-defining role not in any film but in the Aniston-Pitt-Jolie triangle.

As the Forbes ranking suggests, Aniston is a complicated cultural figure. Maybe she is not as beautiful as Angeline Jolie, maybe much of her oeuvre is schlock, but an actress who makes $25 million a year via films and celebrity endorsements (like for Smart Water), who drapes only a man’s tie over her naked, sun-kissed body on the cover of GQ, who has not only money but also fame, independence and a mansion in Beverly Hills, is not exactly an underdog who deserves our pity. We know this, and it’s why Jennifer Aniston, for all her down-to-earth Everygirlness, is difficult to love without reservation. She is either trying too hard to look like a loser, a modus operandi that reads like a ploy, given the, well, many endowments she so enthusiastically displays. (In the Elle spread, as in the one in GQ, Aniston is not shy about flashing skin.) Or she is trying too hard not to conform to the persona the media has constructed for her -- contradicting (sincerely or not?) her public persona in numerous articles and interviews. Whatever the case, she is trying very, very hard.

Hadley Freeman recently made a similar point in the Guardian, in an article that explored why Jennifer Aniston and Cameron Diaz, both unmarried and over 35, garner very different responses from the media. “Both women are beautiful,” Freeman wrote, “but Aniston clearly works, like most would have to, quite hard at this, as a comparison between early 'Friends' episodes and recent GQ shoots proves. Diaz always came across as a naturally gorgeous tomboy who just surfs to work off her chips.” It’s not so much that Freeman is calling “Cameron Diaz lovable because she’s naturally thin” (as Anna North of Jezebel contended). It’s rather that Jennifer Aniston’s weight loss affirms that she is disciplined and calculating, a planner, a plotter, effectual. We know, because we’ve read all about it, that she follows the Zone Diet, shuns carbs, and exercises with religious zeal. And unlike Diaz, who still comes off like an adolescent girl, bopping with ease from one man to the next, Aniston, we presume, is a grown woman looking to approximate the marriage she had with Pitt. She wants kids, she’s told us: This guy may be the one. In interviews, she often drops self-help platitudes that land like heavy weather: "People who avoid the brick walls -- all power to ya, but we all have to hit them sometimes in order to push through to the next level, to evolve." Her effort is always palpable.

In the end, that sort of drive threatens people, especially when it comes from the laid-back girl-next-door. And so, Aniston must be deflated with “international media condescension,” to use Freeman’s term. She is deemed “not natural” while Zellweger is called “authentic.” But her transparent determination is not all that is threatening about her. She is a single, childless, middle-aged woman in a culture that treats women, even stratospherically successful women, as less-than if they don’t marry and have babies. Reading the subtext of her interviews, sifting through all the protestations and relationship talk, you get the sense that she may be ambivalent about fulfilling this conventional role. “Look, I don't think there’s anything wrong with living by your own rules -- you know, whatever blows your hair back,” she told GQ. “I think all women at some level just want to rage against the machine,” she said. “There are too many movies out there that don’t empower women -- movies in which their only way of being happy is finding a man. And, you know, that’s not my favorite theme.” An odd sentiment from the Queen of the Romantic Comedy. But perhaps Aniston has realized it is easier to play by the terms the culture has set for her. If she must be portrayed as tabloid loser, she might as well try to emerge a box-office winner.