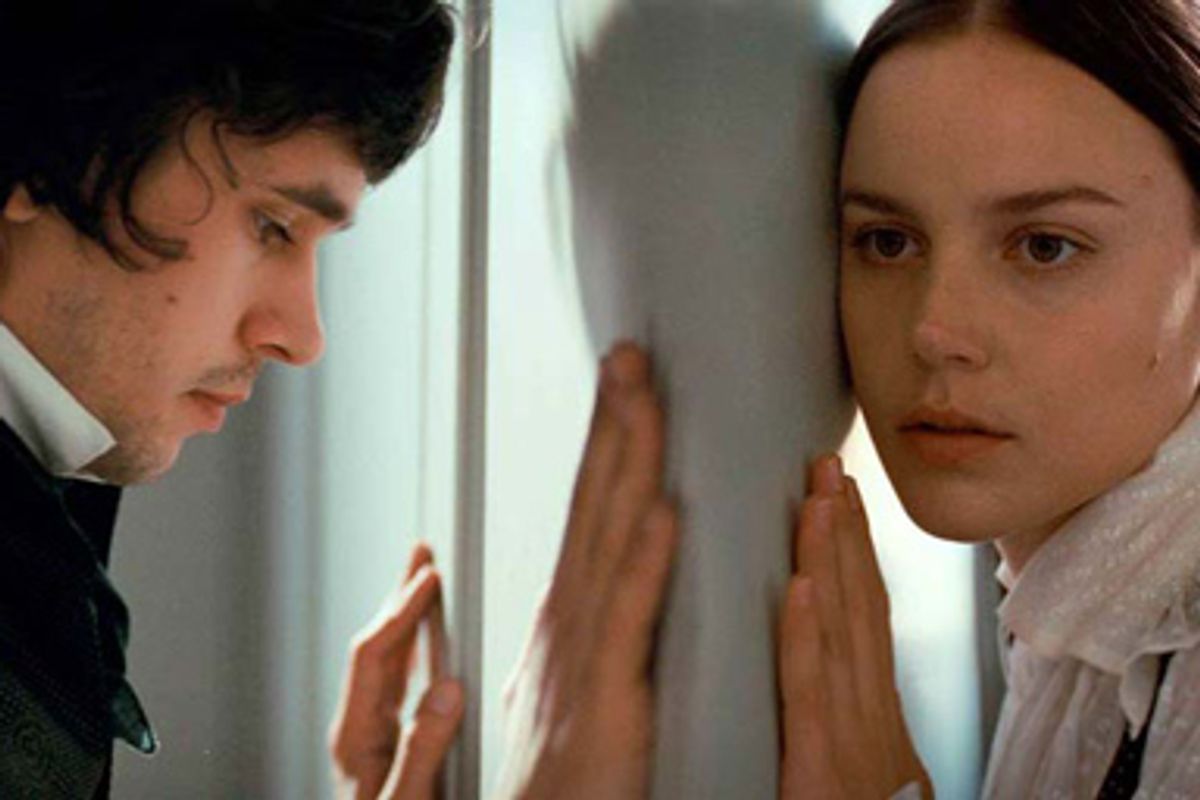 Poetry gets a bad rap almost everywhere: In school, where many of us read it because we have to; in life, where most of us don't read it at all; and in the movies, where it's often quoted by the most pompous character or, worse yet, in a self-serious voice-over. Even people who like poetry well enough often fail to revisit poems they once connected with as young students.

If you're in that last group, Jane Campion's "Bright Star" just may be the film to reconnect you. And if you're not, the film works on its own as an unfussy, passionate and gently erotic love story that never tips into sentimentality. "Bright Star" is a fictionalized version of the love affair between the poet John Keats and a woman who was, quite literally, the girl next door, Fanny Brawne. The two met in London in 1818, when Fanny was 18 and Keats was 23. In practical terms, it was a lousy match: Keats wasn't making enough money to support a wife. But in romantic terms, the union was perfection: When Keats died, in 1821 at the age of 25, Fanny was so bereft that she spent long hours and days walking the heath, and although she did eventually marry, she never removed the ring Keats gave her. She also kept his love letters, some of them tiny, ardent notes, others flowing missives. And in addition to poems he wrote specifically for her (the movie takes its title from one of them), in the time Keats knew Fanny he wrote some of his most beautiful and best-known work, including "Ode on a Grecian Urn" and "Ode to a Nightingale."

Campion -- who also wrote the screenplay, inspired by British poet Andrew Motion's biography of Keats -- tells the story of Keats and Fanny in delicate, painterly colors, layered in such a way that they're vividly vital. She opens the movie with some extreme close-ups of a needle piercing cloth -- when I saw that, I feared I was in for a treatise on the drudgery and heartache of the lives of women, a theme Campion has visited and revisited too many times for my taste. In fact, "Bright Star" is the first Jane Campion I've ever liked, and that includes "Sweetie" and the oft-praised "The Piano." I've always found her movies pretentious and heavily annotated, like the work of a theory-bound academic who fills pages and pages with copious, scribbled footnotes. For me, Campion's filmmaking has always groaned under the weight of her recurring "Oh, how we women suffer!" message.

But "Bright Star" has no obvious agenda. It appears that Campion was simply struck by the tenderness, and the tragedy, of the story, and that has freed something in her storytelling style. That thread-and-fabric business at the beginning is a way of introducing us to Fanny (Abby Cornish), an accomplished seamstress who uses her skills to whip up some wild Empire outfits, complete with intricate pleating and inventive flounces: Her sewing is less an act of drudgery than a miniature style revolution. The smart outlandishness of her garb causes one of her next-door neighbors, the rude and raffish Mr. Brown (Paul Schneider, in a wily and ultimately moving performance), to deride her as a shallow, vain creature. Brown's friend, and the man to whom he serves as a secretary of sorts, Keats (Ben Whishaw), thinks similarly. But one day Fanny brings Keats a basket of treats for his ailing brother, and he's touched by the gesture. She asks him to teach her more about poetry, and under the disapproving gaze of Mr. Brown, as well as that of Fanny's mother (played by the superb Kerry Fox), their love begins to take shape.

Campion -- with the help of her cinematographer Greig Fraser, who gives the film a subtly gorgeous, burnished look -- tells their story as a sequence of awkward glances, minor missteps and misunderstandings, long, seemingly unsurvivable separations and walks in the woods chaperoned by Fanny's younger brother and sister (played, respectively, by Thomas Sangster and a wonderful little redhead named Edie Martin, a devilish cutie with quivering ringlets and a slow-burning smile). The characters' speech is intentionally colloquial, but not jarringly so -- Campion must have wanted them to be timeless lovers, not fossilized ones, and her approach works. She's also astute in the ways she uses Keats' poetry and quotes from his letters. In the context of the story, they're organic and thriving, and the actors feel fully at home with them. Cornish (who starred in the Australian features "Somersault" and "Candy") and Whishaw (who appeared in Tom Tykwer's "Perfume," and also played one of the Bob Dylans in Todd Haynes' "I'm Not There") are an astonishing pair. Cornish, with her slightly somber smile, is a quiet, unassuming beauty, and Whishaw just looks like a guy with a poetic soul. (His Regency Beatle haircut sure doesn't hurt.) But these two don't coast on their his-and-hers prettiness: As they play Keats and Fanny, their double-trouble beauty isn't something that they're just luckily blessed with, but a thing they've created together, a poem unto itself that appears in the air when they reach out to each other. Cornish and Whishaw suggest the outline of intimacy, without putting bold brackets around it, just in the way they lean in close to one another, or in the way the ailing Keats watches Fanny through the window as she cavorts outdoors for his amusement.

At one point Keats, suffering from writer's block, says somewhat despairingly, "If poetry does not come as naturally as leaves to a tree, then it isn't poetry at all." Campion seems to have been guided by those words herself. I used to think she didn't have good instincts as a filmmaker. (Her last picture, the ham-fisted "In the Cut," certainly didn't dissuade me.) But now I think the instincts have always been there; maybe she just didn't allow herself to follow them. There are a few places in "Bright Star" where you get the sense she's working harder than she has to, unwittingly fighting against the delicate texture of the story. But the picture survives her occasional overthinking; mostly, she keeps it fully open to air and light. In one remarkable sequence, Fanny announces to the absent Keats, in a lovesick letter, that she's started a butterfly garden in honor of their love. Her siblings help out by collecting the elusive creatures in wispy nets and bringing them indoors, where they sit patiently in jars, waiting to be freed into the room. And once they are, that room becomes a living bouquet: The insects, dashes of fluttery, silken color, land on wooden windowsills painted white; they linger on doorknobs and perch delicately on linen curtains. This vision is magical precisely because it's presented so nonmagically. And it's symbolic of everything that Campion gets right, every way in which her movie is lyrical yet plainspoken. "Bright Star" burns, and it glows.