The right dreams of taking back the country

At the Values Voter Summit, Carrie Prejean and Michele Bachmann rally the faithful 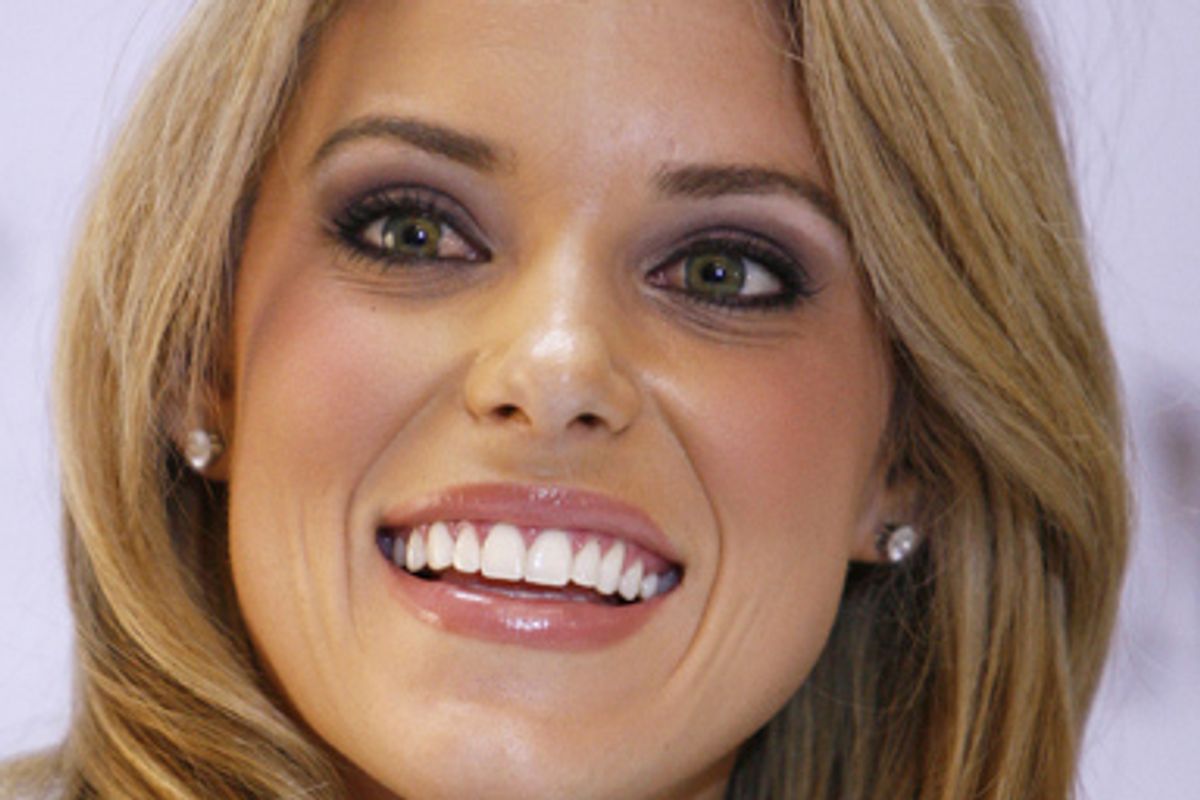 "There was something wrong with turning on the TV and seeing people mock me for my faith," the beauty queen-turned-conservative martyr told the Values Voter Summit, a right-wing confab organized by the Family Research Council's political action committee, FRC Action. "Seeing people make fun of me for being a Christian, trying to discredit me, trying to embarrass me -- it didn't make sense to me."

With big red, white and blue stars projected on the walls, and Jesus Christ being thanked by every other speaker, the summit is pitching itself as the last refuge for patriotic, God-fearing Americans in the age of Obama and his death panels. Prejean was the highlight of the Friday morning session, which also featured your standard-issue red meat speeches from GOP politicians like Eric Cantor and Mitch McConnell, and a healthcare "town hall" with House Republicans Michele Bachmann, Tom Price and Chris Smith. Prejean ushered the crowd off to lunch just now with a passionate recounting of how her dream of being Miss USA was derailed by her refusal to stand by and let the homosexual agenda ruin the world. (Hey, it makes a better motivational tale than the topless underwear photos do.)

Prejean, you may recall, finished as the runner-up in this year's pageant, possibly because of her answer to the question posed by judges at the end of the contest -- whether same-sex marriage should be legal. (An evangelical Christian, Prejean said she thought it was great that Americans could choose between "same-sex marriage or opposite marriage," but that marriage should be between a man and a woman.) Now instead of being Miss USA, she's hitting the conservative circuit, standing up for her beliefs and basking in the glow of adoring audiences like the one she found at the Values Voter Summit.

"The moment the judge asked it, I tried to stand there and look pretty, but in my head I could not believe that they were asking that question at Miss USA," she told the summit. "I could not believe it. I thought that it was extremely inappropriate for that venue." (That prompted a man in the crowd to holler out, "That's right!") "Any other venue it would have been all right," she said.

The question the judges were supposed to have asked, Prejean explained, would have called for a less complicated, less political answer -- like world peace. "What do they want to hear -- world peace," she said. "As soon as a woman doesn't give a 'world peace' answer, why is all of a sudden she all over national news, and it's this huge, huge controversy -- all because I said a marriage is between a man and a woman? Are you serious?"

Most of the rest of her 18-minute speech played to conservative resentment of the way it's so hard to be a Christian in America today. She was "disgusted" at how intolerant people can be, though that disgust doesn't appear to extend to her political comrades-in-arms who want to deny gays and lesbians the rights straight people take for granted. "I feel as though I'm Miss Universe," she said. "I am so proud of the stance that I took. I'm so proud of the answer that I gave, and God chose me for that moment. He chose me for that moment because he knew that I would not only be the one to stick up for him and for the truth, but also he knew that I am strong enough to get through all of the junk that I have been through."

But not so tough that Prejean didn't tear up briefly toward the end of her talk. "Even though," she began, pausing to grapple with her emotions. "Even though I didn't win the crown that night, I know that the Lord has so much of a bigger crown in heaven for me."

She brought the house down.

The earlier sessions had been mostly light on such emotional moments, though the final question at the healthcare panel did come from a woman breathing through a respirator who wanted the room to know the three abortions she had in her younger days had led her to drug use, and a 1977 car wreck, that ruined her life.

But that panel was still pretty tame. Any event featuring Michele Bachmann threatens, at any moment, to tip into sheer, unadulterated crazy, but during the healthcare panel, Bachmann stuck to mere uninformed blather, rather than deranged accusations.

Bachmann did take advantage of her captive audience to start off her remarks on a matter far, far more pressing than reforming a healthcare system that takes in $1 of every $6 spent in America today -- the right's new favorite obsession, ACORN. "As we stand here today, ACORN has yet to be defunded of one dime," she told the summit, even though the House and Senate have each passed resolutions blocking the group from getting the small amount of federal grants it usually wins; those bills have yet to be reconciled or signed by President Obama, so she's right. "We don't like the promotion of child prostitution and illegal aliens coming into our country!" It was hard to escape the feeling that Bachmann thinks the conspiracy invented by the goofy pimp-and-prostitute duo that made hidden camera tapes in ACORN offices actually existed.

The rest of the morning was fairly laid-back, especially by the insane standards the hardcore right set for itself during August's town hall meetings; no one seemed to have guns with them, and the crowd mostly sat politely through the talks. Georgia Republican Price, the head of the conservative Republican Study Conference, promised that if Obama's healthcare reform passes, the GOP would take back both the House and the Senate. Rep. Mike Pence, an Indiana Republican who had that job before Price did, waved a copy of the Constitution and declared, "Nowhere in here can I find the word 'czar'... Washington, D.C., must become a 'no-czar zone'!" (Presumably, Pence didn't object to the Bush administration's various czars because those czars weren't Fascist Marxists.)

Pence also pledged that the right would rise again: "We will take this Congress back in 2010, and we will take this country back in 2012!" It was sweet music to the ears of the values voters. The right, it seems, can dream of hope and change, too.