I was once a young neoconservative. The word meant something different then, before it was hijacked by extremists 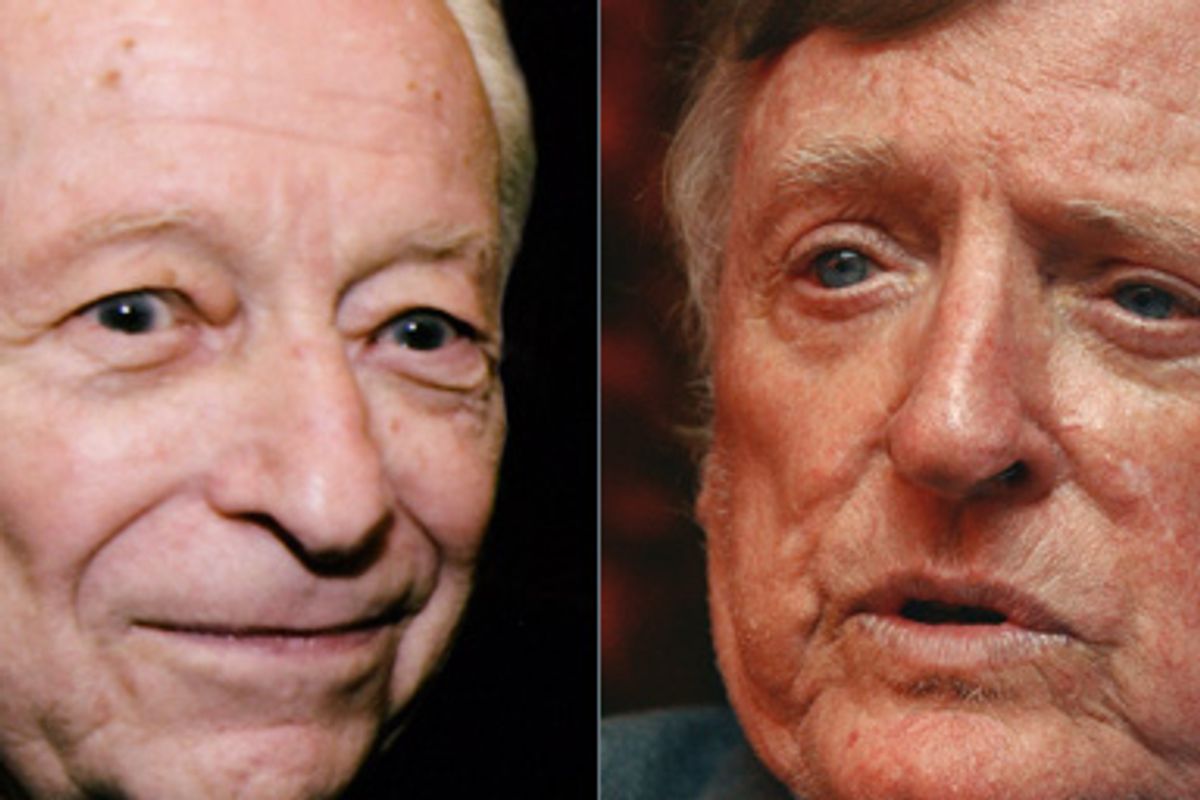 On Sept. 18, Irving Kristol died. On Feb. 27, 2008, William F. Buckley Jr. passed away. Kristol was known as "the godfather of neoconservatism," while Buckley was the founder of the "movement conservatism" of Goldwater and Reagan. The intellectual conservatism that they, in different ways, sought to foster had passed from the scene before they did.

I was a friend of Bill Buckley and an employee of Irving Kristol for several years in the early 1990s, as executive editor of the National Interest, the foreign policy journal published by Kristol and brilliantly edited by Owen Harries. A neoconservative of the older, Democratic school, I broke with the right in the early 1990s and warned about where right-wing radicals were taking the country in my book "Up From Conservatism." The train wreck I predicted occurred during the Bush years, and the postmortems have begun. One is Sam Tanenhaus' indispensable and just-published study "The Death of Conservatism." Another is found in a May 10 blog post by Richard Posner: "My theme is the intellectual decline of conservatism, and it is notable that the policies of the new conservatism are powered largely by emotion and religion and have for the most part weak intellectual groundings. That the policies are weak in conception, have largely failed in execution, and are political flops is therefore unsurprising ... By the fall of 2008, the face of the Republican Party had become Sarah Palin and Joe the Plumber. Conservative intellectuals had no party."

That leaves neoconservatism. But in its origins neoconservatism was a movement of the center-left, not of the right. Here is Nathan Glazer, co-editor with Irving Kristol of the Public Interest, in that magazine's final issue in spring 2005, recalling the origins of the journal in the 1960s: "All of us had voted for Lyndon Johnson in 1964, for Hubert Humphrey in 1968, and I would wager (?) that most of the original stalwarts of The Public Interest, editors and regular contributors, continued to vote for Democratic presidential candidates all the way to the present. Recall that the original definition of the neoconservatives was that they fully embraced the reforms of the New Deal and indeed the major programs of Johnson's Great Society ... Had we not defended the major social programs, from Social Security to Medicare, there would have been no need for the 'neo' before 'conservative.'"

The "neoconservatism" of the 1990s, defined by support for the invasion of Iraq and centered on Rupert Murdoch's magazine the Weekly Standard, edited by Irving's son William Kristol, had little to do with the original impulse, as Glazer points out: "There is very little overlap between those who promoted the neoconservatism of the 1970s and those committed to its latter day manifestation." While Irving Kristol and Norman Podhoretz set aside any differences with the Republican right by the 1990s, other first-generation neocons like Glazer and the late Daniel Patrick Moynihan remained true to their New Deal/Great Society principles. Several of them told me over the years that they thought of themselves as "paleoliberals," not "neoconservatives," a term that was coined as an insult by the socialist Michael Harrington and embraced as a badge of honor by Irving Kristol.

In its origins, neoconservatism was a defense of New Deal/Great Society liberalism at home and abroad, both from the radical, countercultural left of the era and from its own design defects. The early neocons were Kennedy-Johnson liberals who believed that liberal reform should avoid naive utopianism and should be guided by pragmatism and empirical social science. The '70s neoconservatives were so focused on the utopianism of the '60s campus left, however, that most paid too little attention to a far greater threat to their beloved New Deal tradition, the utopianism of the libertarian right. Ultimately Milton Friedman and other free-market ideologues did far more damage to America than the carnival freaks of the counterculture.

But the early neoconservatives were right to defend mainstream liberalism against countercultural radicalism. Like today's right, the '60s and '70s left was emotional, expressivist and anti-intellectual. (One of its bibles was Abbie Hoffman's "Steal This Book!") Like today's right, the '70s left favored theatrical protest over discussion and debate. The prophets of the Age of Aquarius and the "population explosion" were every bit as apocalyptic as Glenn Beck. And just as today's right-wing radicals play at Boston Tea Parties, so Abbie Hoffman dressed up as Uncle Sam. The teabaggers are the Yippies of the right.

Boomer nostalgia to the contrary, in the case of practically every domestic issue disputed by the counterculture and the original neoconservatives the mainstream progressive position today is that of the neoconservatives of the '70s. While the neoconservatives of the Committee on the Present Danger in the 1970s exaggerated Soviet power, the kind of muscular liberal internationalism that Pat Moynihan defended against the left in the 1970s and against Reaganite unilateralism in the 1980s is today's progressive grand strategy. Neoconservatives like Moynihan were denounced as racists in the 1970s for saying the same things about the importance of law and order and functioning families that Clinton and Obama have been able to say without controversy. The original neoconservatives like Moynihan and Glazer sought to help the black and Latino poor by means of universal, race-neutral programs instead of race-based affirmative action, which, they warned, would spark a white backlash to the benefit of conservatives. They were right about the political potency and longevity of that backlash, too, even though today's progressives still refuse to admit it.

The enduring legacy of the original neoconservatives is less a matter of policy positions than a particular intellectual style. David Hume defined the essayist as a messenger from the realm of learning to the realm of conversation. Between the late '60s and the mid-'80s, the public intellectuals of the neoconservative movement shuttled between the two realms, writing essays with academic rigor and journalistic clarity for the general educated public in Commentary, edited by Norman Podhoretz, and the two quarterlies that Irving Kristol founded, the Public Interest and the National Interest. Here are a few of the essays in the inaugural issue of the Public Interest in fall 1965: Daniel Patrick Moynihan on "The Professionalization of Reform"; Robert M. Solow, "Technology and Unemployment"; Jacques Barzun, "Art -- by act-of-Congress"; Nathan Glazer, "Paradoxes of American Poverty"; Daniel Bell, "The Study of the Future." The journal in its ecumenical first issue included Robert L. Heilbroner from the left and Robert A. Nisbet from the right. If you were interested in the scintillant collision of philosophy, politics and policy, bliss was it in that dawn to be alive. In an era as inhospitable as our own to the essay as a form, it is encouraging to see an attempt by conservatives to revive the Public Interest under the name of National Affairs. The influence of the neoconservative style of informed debate is evident as well in the flourishing new liberal quarterly Democracy: A Journal of Ideas.

In the 1950s, Irving Kristol, with the British poet Stephen Spender, had co-edited Encounter. In my view Encounter was the best magazine in the English language ever (sorry, Addison and Steele). Here is an anthology of the best of Encounter, including essays and poems by W.H.. Auden and Daniel Bell and Isaiah Berlin and short stories by Nadine Gordimer and Edmund Wilson. There was a scandal in 1965 when it was revealed that this transatlantic journal of ideas was secretly funded as part of the cold war of ideas by the CIA (both Spender and Kristol claimed to have been deceived). Never was CIA money better spent.

Irving Kristol; his wife, the distinguished historian Gertrude Himmelfarb; and many of their friends and allies had begun on the anti-communist left, battling Stalinists in the U.S. and Europe on the intellectual front of the Cold War. Because Soviet-controlled communists in Western democracies set up cultural and intellectual front groups to battle for public opinion, the anti-Stalinist left decided to fight fire with fire by setting up its own network of front groups and publications, often funded, as in the case of Encounter, by the CIA. This kind of Leninist popular-front strategy, using little magazines, committees and manifestos like the Committee on the Present Danger and the Project for a New American Century, was the organizational contribution of the neoconservatives in the 1990s to their creationist and libertarian allies in the Republican right. But by the time Kristol fils had succeeded Kristol pere as the new godfather of neoconservatism, most of the public intellectuals of the first generation like Moynihan, Bell and Glazer had distanced themselves from Neoconservatism 2.0.

The sins of the sons should not be visited upon the fathers. I hope that, in the judgment of history, the "paleoliberal" neoconservatism of the 1970s will overshadow the crude, militaristic neoconservatism of the 1990s and 2000s. For two decades, between the Johnson years and the Reagan years, neoconservatism really was the vital center that Arthur Schlesinger had called for in the late 1940s. A robust new liberalism, if there is to be one in the aftermath of the opportunistic triangulations of Clinton and Obama, cannot leapfrog back to the Progressives or New Dealers, but must begin closer to home, with the early neoconservatives, who had learned from the failures and mistakes as well as the successes of the Progressive Era, the New Deal and the Great Society.