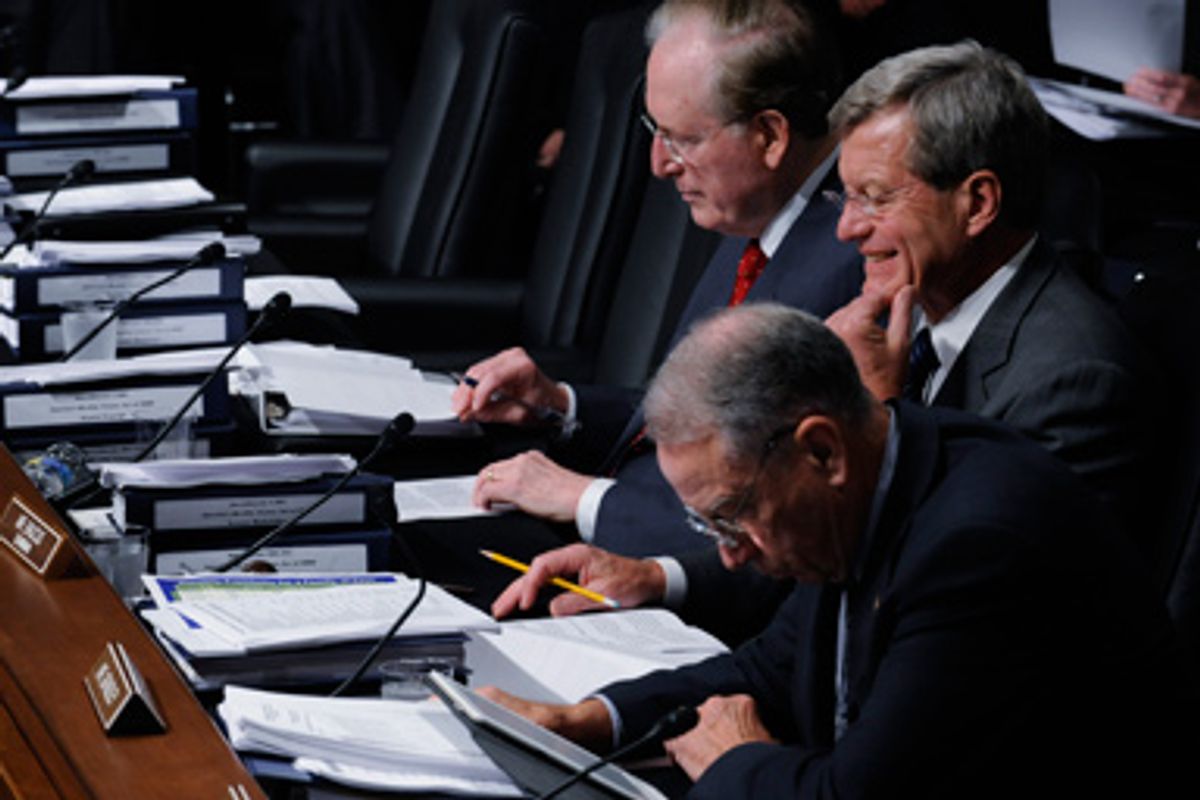 There should have been a sense of urgency Tuesday morning as the Senate Finance Committee started work on its version of healthcare reform legislation. "While we're meeting, every six seconds someone is losing their health insurance," Sen. Debbie Stabenow, a Michigan Democrat, reminded her colleagues.

Unfortunately, by the time the panel broke for a vote (and some lunch) three and a quarter hours later, the only thing they'd done was talk -- and talk and talk and talk -- about how pleased they were to be there working. Stabenow's statistic meant 1,950 people had lost their insurance during the morning session -- and yet the Finance Committee hadn't even managed to finish with its opening statements. Two members deferred their blather until after the break. Chairman Max Baucus, a Montana Democrat, had asked his colleagues to limit their remarks, but keeping a senator quiet may be the only task harder than producing a healthcare reform bill. The first votes on any actual proposed amendments to the bill weren't expected until after 6 p.m.

For anyone hoping the committee would smooth a quick path to the holy grail of universal healthcare, the first day may have been a disappointment. Republicans praised Baucus for his attempts to get them on board with his legislation, then turned around and blasted the project as "an assault on liberty," as Arizona's Jon Kyl, the Senate GOP's second in command, put it. Democrats walked a similar line, thanking Baucus for his work but stressing that they might have written the bill a little differently if Baucus' Gang of Six hadn't been in charge of it. "The committee now finds itself short on both real reform and Democrats and Republicans having their names on this mark and this legislation," said Oregon Democrat Ron Wyden. "The actions of this committee from this day on are going to go a long way toward determining whether the Congress will remain empty-handed."

Still, Baucus -- whom progressives have been mocking all summer as he tried to cut a deal with the GOP -- seemed to be moving back to the left again. Before the panel even started voting, he agreed to extensive modifications, mostly suggested by his fellow Democrats, to make the legislation more generous to lower-income people who need federal subsidies to buy insurance, stretching the subsidies a bit higher and capping the out-of-pocket costs they could be liable for a bit lower than he originally planned. Fees on people who didn't buy insurance would be lowered; anyone who couldn't afford insurance but made too much to qualify for subsidies could buy into a catastrophic policy that would also cover some preventive care; excise taxes on expensive health insurance plans would kick in at higher levels.

His aides didn't appear to mind that Baucus also came under fire from Republicans, insurance companies and their allies, including the Wall Street Journal's conservative Op-Ed page, for getting the federal government to pressure insurer Humana Inc. to stop spreading propaganda against the reform bill. Humana had sent a letter to senior citizens who get Medicare Advantage coverage from the company, warning them that they'd lose benefits under the reform plans. The Centers for Medicare & Medicaid Services, at Baucus' prompting, wrote Humana and said it was investigating the company's conduct. It was a bit of a departure from the norm for Baucus, who received $3 million from the health and insurance sectors between 2003 and 2008. That figure may reflect more about how Washington works than anything else -- Baucus got money from those industries because he chairs the Finance Committee, and anyone else with that job would have been showered with corporate cash, as well. At any rate, Baucus appeared to be trying to send a signal that he might not remain as friendly with industry as it once seemed as the bill moves along.

The main message of the day, notwithstanding any complaints about what was in the proposed bill, was that it was moving along. "All the years I've worked on healthcare, I've never seen such a promising opportunity as you have put here before us," said West Virginia Democrat Jay Rockefeller, a staunch defender of keeping a public insurance option in the reform bill. Rockefeller, who has offered an amendment to do that (it'll come up later in the week), used his opening statement to push for it. "The word 'public' is not a good word these days, but it doesn't mean that the idea is not a good one," he said. Like most Democrats, he also predicted success in the end. "We've got a good chairman, we've got a good committee, and we just have to be clear that the days of an unworkable status quo are over."

That doesn't mean, of course, that the Finance members won't take their time with it. The committee has to consider 564 amendments; aides passed out a summary with one-line descriptions of each one, and the summary alone ran 43 pages. Some of the Republican ones, in particular, seem aimed more at slowing things down, or at least making the bill unworkable: Utah's Orrin Hatch, for instance, offered an amendment to waive any fee for employers who don't provide insurance coverage for their workers; Kyl had a pair that would bar the federal government from setting minimum levels of coverage that private insurers had to meet.

But Baucus and his Democratic colleagues appeared more in sync than they had been all summer, when he cut all but two of them out of the negotiations he held with Republican counterparts. "No one should die because they cannot afford healthcare," Baucus said. "This bill would fix that ... No one should go bankrupt because they get sick. This bill would fix that." He implicitly challenged the Republicans who -- despite all the chances he gave them -- never signed on to his dream of a bipartisan bill: "Our actions here, this week, will determine whether we are courageous and skillful enough to seize the opportunity to change things for the better."

If Democrats can hold together through the rest of the week (and maybe longer) as the committee works through Baucus' proposal, there's a good chance that some legislation will emerge that reforms the insurance market, bars insurers from discriminating based on preexisting conditions and gives most Americans access to at least some form of healthcare. No, there's still no guarantee that the bill will include a public option, with or without triggers; yes, there's still plenty of work left to do before the White House starts to breathe easier about its chief domestic policy goal of the year. But after a summer of lies and angry mobs doing all they could to block healthcare reform, it's still moving along as the fall begins.