From Oprah to Banana Republic, pop culture is nostalgic for a dark time. Screw history, bring on the pencil skirts! 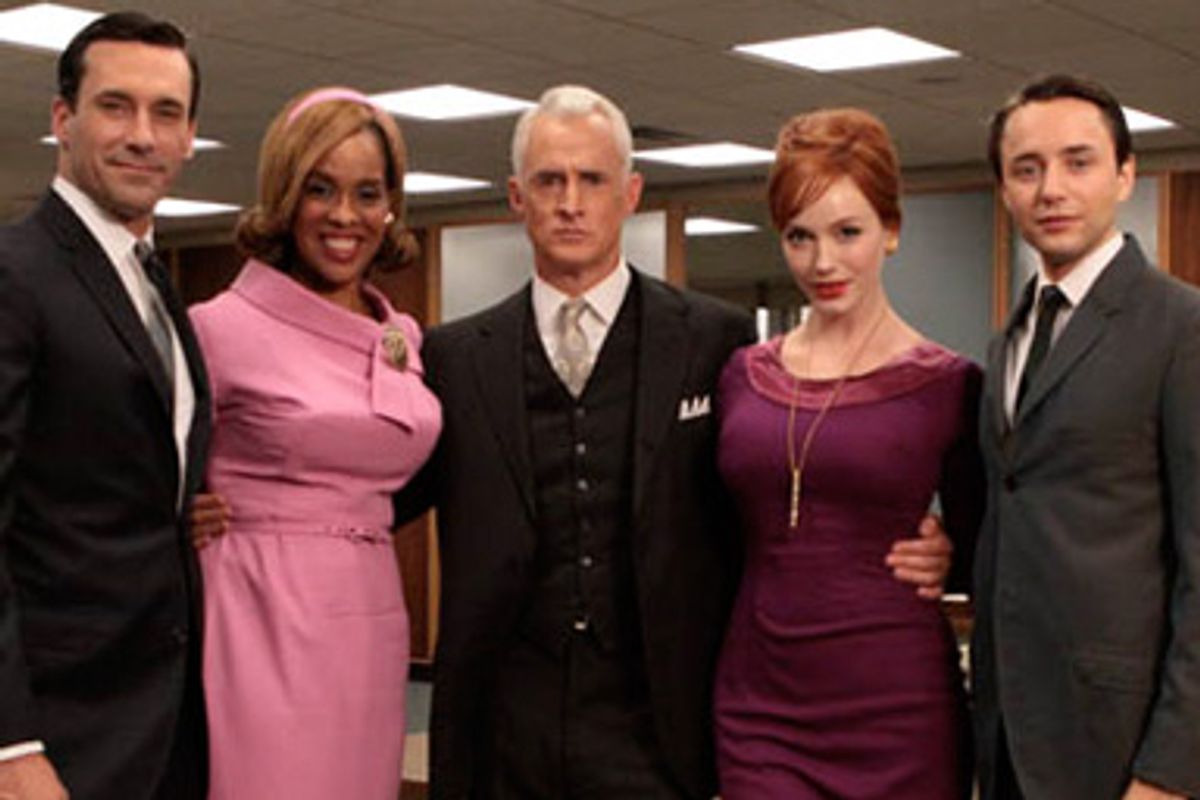 Earlier this week on "The Oprah Winfrey Show," Gayle King, in an adorable rose-colored suit with a matching headband for her perfectly flipped hair, filmed a skit in which she posed as a secretary starting her very first day at Sterling Cooper, the fictitious ad agency portrayed in “Mad Men.” She jokes about the difficulties imitating head secretary Joan Holloway’s swaying walk. She asks copywriter Peggy Olson about all the leering glances from male co-workers. (Peggy: “I’ve noticed that when you go to lunch with a man around here, you’re often dessert.” Gayle: “I like dessert.”) Roger Sterling perches on her desk and invites her into Don Draper’s office for a “celebratory drink” and a smoke, which promptly sends King into a coughing fit. Don assures her the cigarettes are herbal, though she is skeptical. “These really can’t hurt you?” she asks. “Yes,” says Roger, “they can.”

What’s utterly missing from this scene are the things that could, in fact, hurt a woman like Gayle King had she walked into an office like Sterling Cooper in 1963: To date, no woman of color has joined even the much-put-upon Sterling Cooper steno pool (the closest employee is Hollis, the black elevator operator). Last season, Ms. Holloway sniped that Paul Kinsey was only dating a black woman, Sheila White, “to prove how interesting he is.” And a mere three episodes ago, Roger Sterling entertained the guests at his garden party by putting on a minstrel show, complete with shoe-polish blackface. This is hardly the kind of group that one would expect to greet a black employee with a friendly ogle, a glass of Scotch and a smoke.

Oprah and Gayle know this, of course: In her interview segment, Oprah touches on the “shocking” racism and sexism of the '60s as depicted on “Mad Men,” and acknowledges that back then, she wouldn’t have even had a show. And in an interview on the Web site for AMC, the channel that airs "Mad Men," Gayle says, “I’m glad I wasn’t a woman working during the '60s. And if you’re a black person, I’m really glad I wasn’t working in the '60s.” But visitors to Oprah’s Web site -- the page dedicated to the episode is called “Oprah goes back in time! The ‘60s!” -- could easily come away with the impression that the ‘60s were an uncomplicated era when women were snug at home with their beauty products and their darling children, all of whom had really awesome toys: One segment includes Oprah’s Favorite Things (including a white Chatty Cathy doll, a white Barbie doll with a Jackie Kennedy bubble cut, and Maybelline mascara, about which Oprah says, “It was revolutionary! Now we just take these things for granted!”), another is a quiz on '60s slogans for household cleaning and beauty products. Finally, there is an interview with Oprah’s childhood idol, Jerry-freaking-Mather, the star of “Leave It to Beaver!” Gayle, for her part, gushes to her AMC interviewer about the wonders of ‘60s undergarments -- “I said, ‘What am I? A size 4? ‘ It squeezes you in and gives you an hourglass shape” -- and admits she copped two such squeezing devices (whether corsets, girdles or some combination thereof) off “Mad Men” costume designer Janie Bryant for her personal use.

This isn’t to pick on Oprah, who has hardly refused to engage in hard questions on racism and sexism. But her show is only one example of the weird place “Mad Men” has come to occupy in pop culture: On the one hand, it has become a catalyst for writers and fans to engage in regular, meaty conversations about some of the toughest issues of an earlier era that still carry on into our own. On the other, it has spawned a gleeful, giddy nostalgia -– pencil skirts! Martinis! Fedoras and pillbox hats! -- for that era that seems out of place with the themes of the show.

One person who seems most perplexed by this trend is the very man who has become an icon of handsome, gray-flannel-suited masculinity because of the show's success. When asked by an "Oprah" staffer what he likes best about his character, Don Draper, actor Jon Hamm replies, “That’s tough. He’s not a very likable guy.” He then goes on to refute the notion that the ‘60s were somehow a golden era. “I’m pretty happy living in this decade,” he says. “We have things like painless dentistry, and Bluetooth and the Internet. As our show tends to point out, nostalgia tends to gloss over the real difficulties of an earlier era.”

“Gloss over” is perhaps not strong enough a term for the nuclear gleam of nostalgia coating that has come to characterize the greater "Mad Men" industries Inc. Jon Hamm may not wish to live like a Mad Man, but the lucky winner of the "Live Like a Mad Man Sweepstakes,” sponsored by Hilton Hotels, will be swept off to New York for four days in the Waldorf-Astoria where he or she will be “wined and dined like any VP Sterling Cooper client” and be groomed by a stylist from the show. Marie Claire provided readers with instructions on how to “Get the Lady Like Look!” (apparently it involves stilettos and a $14, 350 Jaeger Le Coultre watch) and London ladies can take a three-hour workshop on how to get the hair and makeup looks of that era (hint: it involves lots of work, lots of hot rollers, lots of hairspray, and possibly a wig), where “tea and cakes will be served.” Earlier this summer, Banana Republic (which has a "Mad Men"-inspired line) sponsored a retro-modeling contest to win a walk-on part on the show (while the 20 finalists are indeed gorgeous specimens of retro-beauty, they all look pretty white – with the exception of Man No. 20, and possibly -- but not necessarily -- Woman No. 5 and Man No. 19).

But Don’s gray-flannel suit was actually a sign of conformity. Those undergarments, lovely as they might be in action, were not so much fun if one had to actually sit down in them (as Oprah discovered on her show). And while I find Christina Hendricks to be smoking hot –- and certainly an antidote to the waifish models and actresses that have been in fashion over the past 15 or so years -– I find it disingenuous when people suggest she looks like a “real woman.” In the late ‘50s and early ‘60s no one would have dared to suggest she was a stand-in for the ordinary woman. She was a very convincing approximation of the ideal. As her colleagues at Sterling Cooper could no doubt tell you, one could buy all the foundation garments in the world and still not become a Joan without some pretty specific natural endowments.

I’m not knocking the clothes here. I’ve worn brick red lipstick since seventh grade, half the dresses in my wardrobe are at least 25 years old and most are from the ‘60s. And I'm not knocking cocktails (always in style) or even cigarettes. I will even admit to being thrilled with the Joan Holloway paper doll set. And no one is going to say that "Mad Men" creator Matthew Weiner has not, himself, contributed to the mystique by making a jaw-droppingly beautiful show that is pitch-perfect in all its aesthetic period detail. But isn’t it a little odd that a show that, among other things, warns about the dangers of seeing the past in too amber a light has spawned an industry devoted to fetishizing nostalgia for that same flawed past? Isn’t it strange that the same show that makes us all say thank God I’m not a secretary/suburban dad/housekeeper/elevator operator/Jewish department store owner living in the early ‘60s also inspires us to turn around and play dress-up with our favorite characters? What kind of play-acting are we engaging in?

Some forms of play can be downright subversive. For example, I am loving the anonymous writer who has taken to Twitter as Carla, the Draper’s housekeeper. And maybe there is also something rebellious about two incredibly powerful black women blithely inserting themselves in the script for a critically acclaimed drama with the confidence that they belong there. “They didn’t hire me for my typing!” shouts Gayle King, while looking luscious in her suit. And they didn’t. They hired her because she is the best friend and employee-at-large to the richest African-American of the 20th century, who is also a good contender for most influential woman in the world. If you want to flip the script, that’s one way to do it.