And they're doing something about it. Too bad they live in Europe. Why can't we have smarter right-wingers? 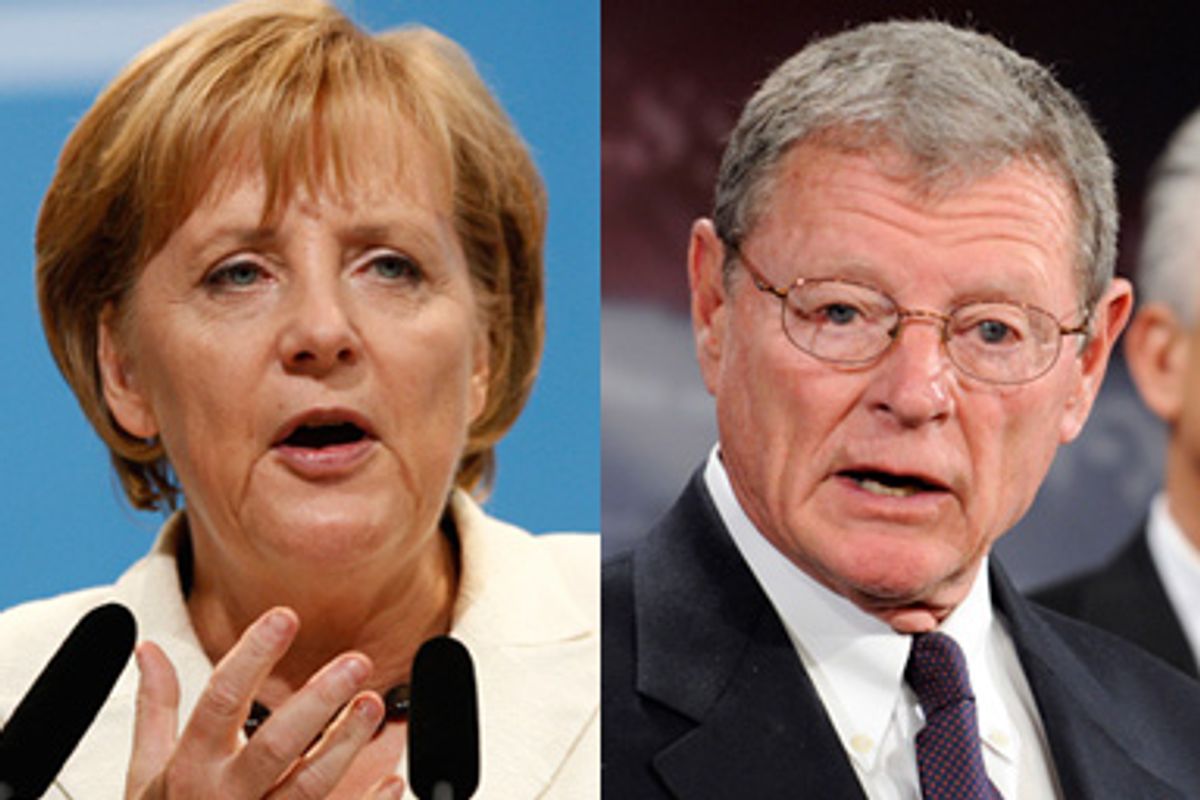 When eminent scientists, elected officials and diplomats of all political persuasions gather in Copenhagen in December to renew the worldwide effort against catastrophic climate change, there will be at least one discordant voice in the house. Sen. James Inhofe, the Oklahoma Republican who has called global warming "the greatest hoax ever perpetrated," has vowed to bring the conservative message of doubt, in person, to Climate Conference 2009.

No doubt Inhofe's appearance will embarrass the Obama administration and irritate environmentalists, just as the eccentric Oklahoman intends. But nobody will be more frustrated and perplexed than the European conservatives who are hosting the conference in Denmark and whose governments in Germany, Sweden and France have made the most sustained progress toward the energy and carbon reduction goals set out in the original Kyoto agreement. Those leaders cannot understand why their ideological comrades in the United States refuse to acknowledge the gravity of the problem -- and insist that "conservatism" is synonymous with freedom to pollute and ruin.

The division between American and European conservatives over climate change came up during the Clinton Global Initiative's meeting in New York City this week, when Danish environmental minister Connie Hedegaard, who is overseeing preparations for the Copenhagen conference, met with former President Bill Clinton. A leader of the Conservative People's Party, which shares power in Denmark as part of the ruling coalition, Hedegaard has complained bluntly about the obstructions erected by Republicans in the U.S. Congress. Not surprisingly, perhaps, Clinton agreed -- and suggested that Hedegaard bring her message of conservative environmentalism directly to her American counterparts.

"Climate change is an issue that transcends all boundaries, impacts us all, and requires us to act," he said. "Conserving our planet is a conservative position. Conservative governments now run most of the countries that are on track to meet their Kyoto targets. Their efforts on climate change have not undermined economic growth -- in fact they've increased it."

According to Clinton -- whose foundation's Climate Change Initiative is working with officials in 40 major cities around the world to reduce energy use and implement renewable sources -- the four countries that have made the most progress to date are the United Kingdom, Sweden, France and Germany. Although Labour still rules Britain, the other three are indeed all governed by right-wing or center-right governments.

As a rule, of course, European conservatives tend to be more moderate and liberal, in the modern sense, than those on the American right. That is especially true in the Nordic countries. But even the more radical conservatives in Europe, who tend to emulate American and British conservatism, uphold environmental values and grasp the challenge of climate change.

In Sweden, for instance, conservatives hailed the 2007 ascension of a four-party coalition headed by economist Fredrik Reinfeldt as a triumph for free-market economics and a "revolution" in Swedish politics. Much in the style of Margaret Thatcher or Ronald Reagan, the new Swedish prime minister has implemented a series of reforms, including tax cuts on personal income, abolishing wealth taxes, lowering property taxes, lowering unemployment benefits (among the highest in the world), reducing public benefits and privatizing state companies and services.

But the Swedish conservatives boast loudly and often about their country's record in exceeding the goals set for Sweden in the Kyoto agreement. Although that agreement permitted Sweden to increase its carbon emissions by 4 percent, it actually reduced emissions by 9 percent. That reduction occurred between 1990 and 2006 -- during a period when the Swedish economy grew by 44 percent.

The Swedish experience proved that there is no contradiction between conservation and growth, putting the lie to a central argument of American conservatives like Inhofe. Or as Sweden's environmental minister politely explained, sounding a lot like Al Gore: "Developments in Sweden give us a chance to show other countries that are doubtful that it is possible to reconcile economic growth with emissions reductions. This means we can both encourage industrialized countries that have not yet done enough and convince developing countries that sustainable development of society is possible."

Nicolas Sarkozy, the French prime minister whose rise was seen as an important victory for the right, is likewise determined to move his country toward a greener future -- with a direct carbon tax. Although a carbon tax is unpopular on both the left and right in France, Sarkozy hopes that by levying a financial penalty on carbon emissions, he can advance clean technology and stimulate the next stage of economic growth.

Germany's Angela Merkel is poised to lead the conservative Christian Democrats to another victory in elections this weekend, in no small part due to her coalition's allegiance to environmental goals. She too sees no reason why the parties of the right should not be devoted to stewardship as well as freedom. Many American conservatives admire her and her fellow European conservatives for prevailing despite their continent's hostile ideological environment. Perhaps someday they will realize that, at least on the issue of climate change, the admiration is not mutual.