Deal with it, liberals

Will Democrats make progressives accept a healthcare bill that doesn't include the public option? 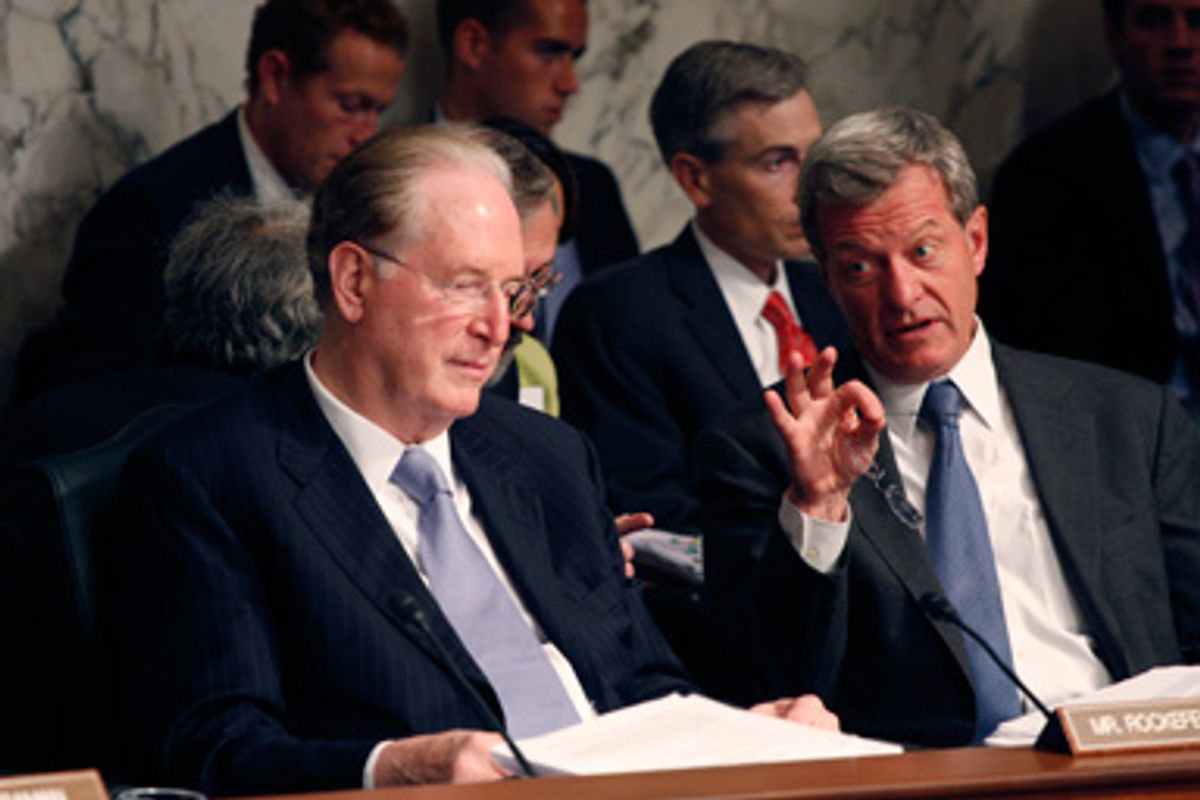 A few days into the Senate Finance Committee's work on healthcare reform, a process that threatened, over the summer, to go completely berserk has started to seem a little calmer. Especially for Democrats. For the most part, Republicans on the committee have been completely unhelpful (that is, when they've been awake), resorting to obvious delaying tactics; the notion that the GOP is interested in cooperating with Democrats is evaporating quickly. Meanwhile, the panel's chairman, Montana Democrat Max Baucus, who spent the summer pursuing blue-sky dreams of bipartisanship, has suddenly turned tough, ruling the sessions so firmly that Republicans have resorted to shouting at him.

Just because things have started off well for progressives, though, doesn't mean they'll stay that way. As the healthcare reforms move through Congress, some of the most contentious fights are likely to be intramural battles among Democrats trying to figure out how expensive the legislation should be, how to pay for it and how generously the federal government should subsidize insurance for people who can't afford it at market rates.

And, oh yes, there's the little matter of the public option.

Even though President Obama says he prefers it, even though the vast majority of the House Democrats want it and even though odds are good a majority of the Senate caucus does, too, it's still not clear whether the legislation will include a government-run insurance option to compete with private insurers. "I'm not sure that issue's been resolved yet," says former Senate Democratic leader Tom Daschle, still a close confidant of Obama's on healthcare even though tax problems sabotaged his nomination as Health and Human Services secretary. In the end, progressives might still be let down. People involved in crafting the reform legislation, from industry groups to the liberal Families USA, say the public option might only survive the legislative process with so-called triggers that delay its implementation, or as a co-op like the ones proposed in the Finance bill. That kind of bargain could make for serious clashes if Democrats and the White House ask their liberal allies to accept it.

The first test of which way things are heading could come Friday morning, as the Finance Committee debates, and votes on, amendments offered by progressive champions of the public option. "We're going to be all about it," Sen. Jay Rockefeller, a West Virginia Democrat who chairs the panel's health subcommittee, said Thursday night. Rockefeller laid out the appeal of such a government-run plan pretty bluntly. "They don't have any shareholders, they don't have any marble-columned buildings, they just have a service, which doesn’t have to make a profit," he said. But even he and New York Democrat Chuck Schumer, who joined him to brief reporters on their strategy to keep the public plan alive, weren't sure they'd be able to get it through the committee, whose Democratic membership tilts more conservative than the Senate as a whole. The plan "faces its steepest odds in Finance," Schumer conceded. But "don't count it out." It was a pretty wan attempt at spin, coming from a bulldog like Schumer.

What makes the debate so frustrating to progressives is that the public option is already part of the other bills that have passed three committees in the House and one in the Senate. (Though conservatives like to predict it will mean a government takeover of all healthcare, it would actually only be one part of a new insurance exchange system where small businesses, their workers and people who aren't covered by their jobs could buy policies.) Whether the plan survives may come down to how hard the left pushes for it in the House; the more support it has there, the harder it would be for a House-Senate conference committee to drop it. Liberals in the House seem to have the upper hand, as Speaker Nancy Pelosi has been making it clearer every day that she can't pass a bill without a strong public plan; she bashed triggers Thursday as a cop-out.

That conference committee step is where the White House is most likely to get heavily involved in the process. But that isn't easing concerns among liberals, who still don't believe that Obama will hang tough if the public option threatens the overall healthcare bill. "They haven't always convinced people that they're fighting on their behalf on these key issues," says Mike Lux, a Democratic strategist who handled outreach to progressive groups for Obama during the transition last year, and who now consults for Health Care for America Now, a labor-backed group pushing hard for reform. "That has sort of undermined their confidence." Lux helped cause a panic among some progressives this week, when he wrote a blog post warning that the administration seemed "obsessed" with getting moderate Republican Olympia Snowe, of Maine, on board with healthcare legislation, even if it meant compromising on the public plan. Snowe is, by now, about the only member of her party who still seems open to the reform proposals, but she says she would only support a public option with triggers.

The White House says Obama is still committed to the public option as the best way to bring competition and lower costs in the insurance market. Some liberal activists working on the reform plan think the administration is basically just trying not to tip its hand. "The White House is unlikely to be inclined to push hard in one direction or another, because it needs to promote passage in both [the House and Senate]," said Ron Pollack, executive director of Families USA, which -- in a bit of an odd-couple pairing -- has joined with the drug lobby and other industry groups to push for reform. "Pushing in favor of one approach over another is going to be harmful in one of the two places." Lux agreed. "Strategically, what they're trying to do is keep their options open," he told Salon. "Their entire strategy -- from the time I was in transition until today -- has been, 'Keep our options open, try to go down multiple paths at the same time.'"

With Republicans -- besides Snowe -- apparently dead set against the reform legislation, some progressives are wondering why anyone in the White House or in Democratic leadership is still worrying about whether the GOP likes the public option. "Lord knows the president has tried for bipartisanship," said Roger Hickey, co-director of the liberal Campaign for America's Future. "Lord knows they've reached out the hand of bipartisanship -- and the Republicans have bitten it off." If the 60 Senate Democrats all hold together and vote down GOP attempts to filibuster the bill, a progressive approach could still pass. Moderates could peel off and vote against the bill's final passage, as long as they blocked Republican attempts to use Senate rules to kill it, Hickey said.

But advocates of the White House approach worry that the focus on the public option has obscured the rest of what's in the legislation -- insurance reforms that would expand access and lower costs for most Americans, and the beginnings of a shift to more evidence-based payment systems that would rein in costs down the line. "There are so many things that everyone believes are very important, and very helpful, and are not controversial, and they've gotten inadequate attention," Pollack lamented.

And the White House may not want to risk the fragile coalition it so painstakingly assembled earlier this year to back reform, because of those things that aren't controversial. Insurance companies -- who are still on board with the reforms, lured in by the prospect of millions of new customers -- aren't shy about opposing the government plan, even though Obama says he backs it. "From the beginning of the year, we've been very clear about our concerns about the public option," said Karen Ignani, the CEO of America's Health Insurance Plans, the insurance industry lobbying group.

Still, speaking to reporters at a briefing sponsored by the Christian Science Monitor, Ignani didn't sound quite confident enough of victory to pledge that the bill wouldn't include some form of public plan: "It's very difficult right now to predict." The public option's fate may not be quite sealed yet, after all. But if progressives want to save it, they're going to have to keep fighting for it.