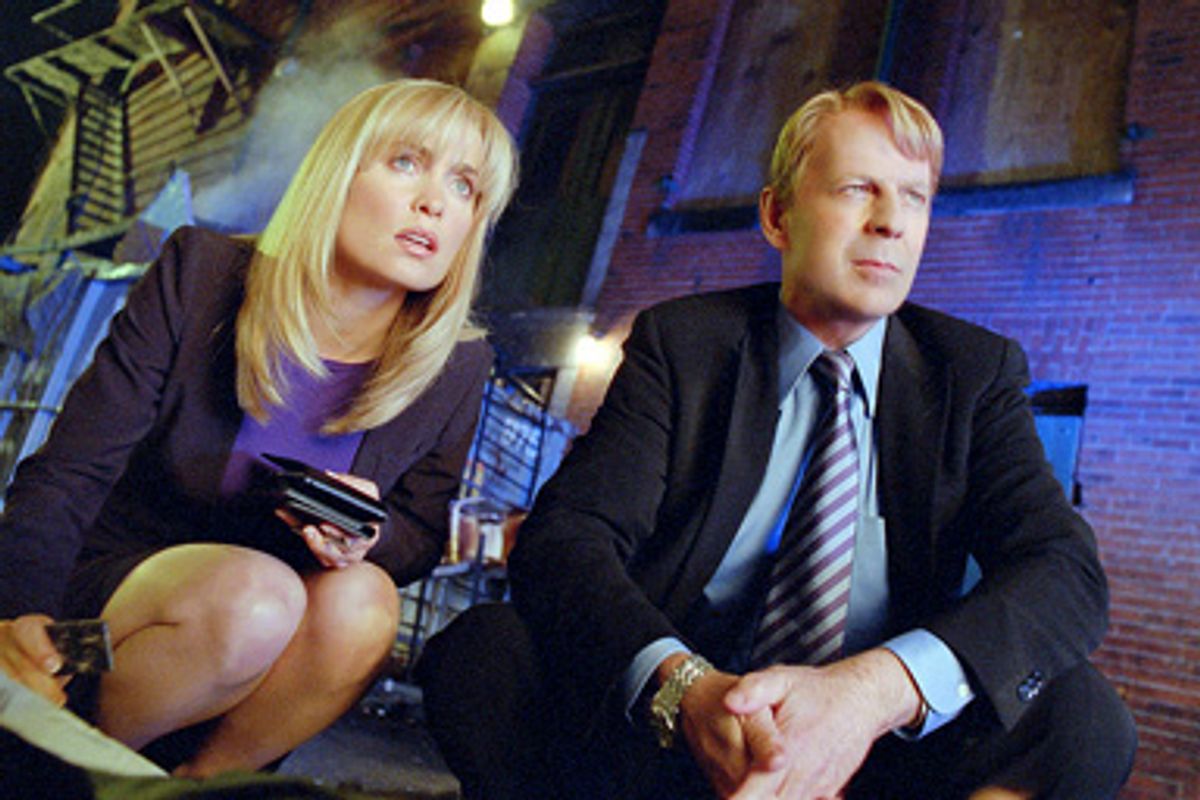 There are preposterous movies that march along with grim determination, unaware of their own ridiculousness (Exhibit A: "Terminator Salvation.") And then there are preposterous movies that luxuriate in their own silliness, sinking deep into the loopy foam of their own bubble bath. "Surrogates" -- which was directed by Jonathan Mostow, who also made the 1997 thriller "Breakdown," as well as, interestingly enough, the 2003 "Terminator 3: Rise of the Machines" -- falls into the latter category. In "Surrogates," set in the not-so-distant future, human beings no longer need to leave their homes to work, to go to the gym, even to hang out with friends. Instead, they put on their comfy bathrobes and jammy bottoms, lie down on special couches and stick a highly advanced version of those plastic sun-protector thingies onto their eyelids. Outfitted thus, they're able to control, via brainwaves, the actions of their "surrogates," robot creatures that are often -- though not always -- younger, better-dressed, more well-toned versions of themselves. The woman surrogates wear glossy, Dolly Parton-style wigs, favor fitted, low-cut evening suits (for day) in Jujube colors, and march through their daily business with their firm, pointy boobs jutting skyward, à la the Fembots in the "Austin Powers" movies. The men -- well, they just have hair. Everyone has poreless skin that resembles latex coated with a fine mist of foundation delivered by airbrush.

Sounds great, right? But there's trouble in this plastic paradise: Bruce Willis plays an FBI agent named Greer who, along with his partner, Peters (Radha Mitchell), is investigating an unusual murder case. It appears someone is bumping off the surrogates with a special weapon that simultaneously kills their human operators by -- yes! -- liquifying their brains. One of the first victims is a club kid who happens to be the son of the guy who invented surrogates in the first place (played by James Cromwell as a human and by James Francis Ginty as the younger, prettier robot version).

There's more, including a charismatic anti-surrogate activist played by Ving Rhames. And did I mention that Greer and his wife, Maggie (Rosamund Pike), have tragically lost a son? The human Maggie, frozen by grief, lies in her darkened room all day surrounded by pill bottles, while surrogate Maggie blankly and cheerfully runs a surrogate beauty parlor that looks like a Barbie's Dream House add-on, replete with bubble-shaped chairs and hot-pink see-through appliances.

Mostow doesn't treat this material as camp -- he navigates the rather absurd plot twists in a way that almost cajoles you into believing they make sense. (The screenplay is by Michael Ferris and John D. Brancato, adapted from the graphic novel by Robert Venditti and Brett Weldele.) But even though the picture ultimately carries a heavy-duty moral about the dehumanizing effects of machines, Mostow doesn't approach the material with deadly solemnity. For one thing, Greer's supposedly hunky surrogate, his hair coiffed in a stiff blond forelock, looks less like the young Bruce Willis than John Tesh, an obvious but witty poke at misguided vanity. It's a relief when Greer dumps the surrogate facade to reveal a guy who looks more like the real post-middle-age Willis, a scruffy, almost-regular joe with wrinkles, a trim-but-thickened torso and a nearly hairless pate. This is one of Willis' stock earnest messiah roles, but he pulls it off serviceably: Even his self-serious squint betrays the hint of a wink.

And at times "Surrogates," for all its enjoyable silliness, does veer into chilly territory. In one scene, as Greer begs Maggie to come out from behind her protective surrogate mask, to acknowledge the death of their son and get on with life, her face -- it's the bubbly surrogate face he's speaking to -- suddenly goes dead. Pike and Willis play the moment perfectly, capturing the horrifying reality of what it's like to plead with a loved one, only to realize that person has cut himself or herself off from any recognizable emotion. "Surrogates" stays afloat by not taking itself too seriously, but also by recognizing that a movie about robots shouldn't look as if it were made by one.