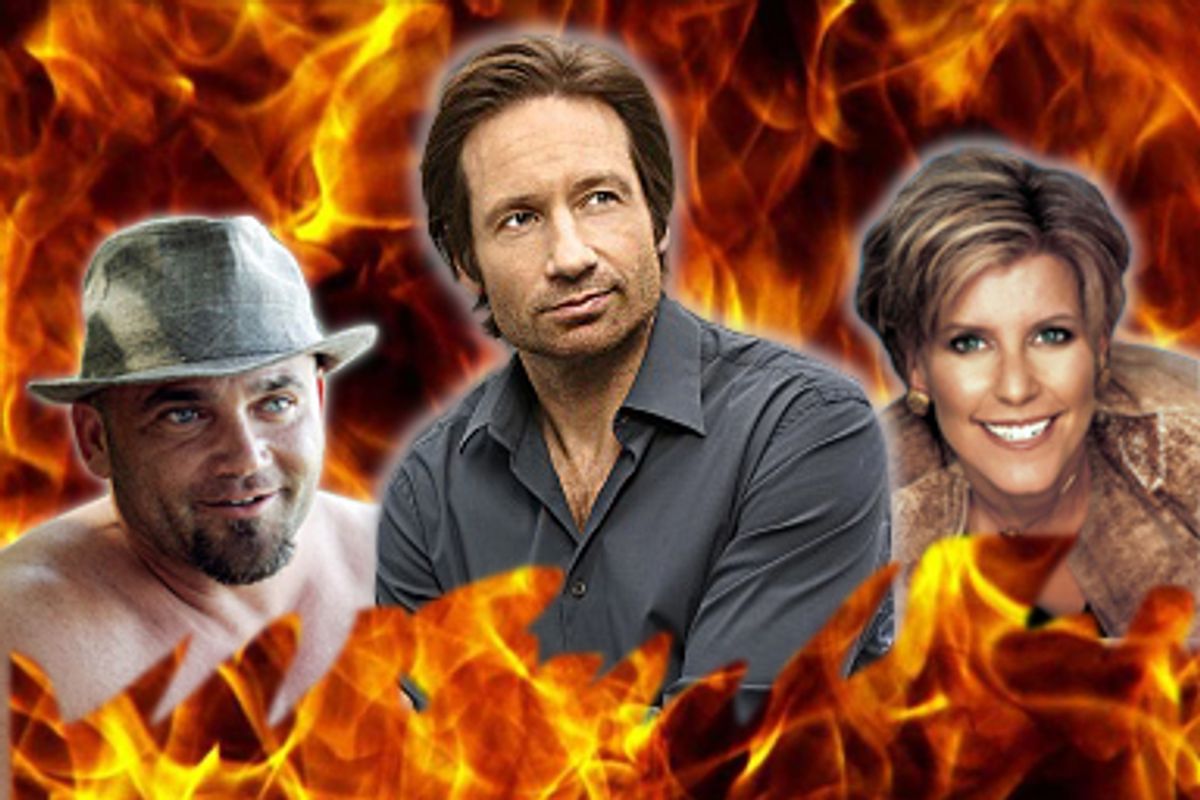 Never before has it been more professionally expedient to seek vengeance. From Mackenzie Phillips to Levi Johnston to "Eat, Pray, Love" author Elizabeth Gilbert's ex-husband, who's writing his own book, presumably titled, "Seethe, Avenge, Cash Massive Check," the airwaves and bookshelves are packed by stories from the scorned, the abused, the rejected, all looking to wash their hatred and torment away in the cleansing brilliance of the limelight.

But let's not judge these sound-bite-spewing tattletales too harshly. Because we all hold grudges, don’t we? Sure, we pretend not to, with our therapy-speak about "That's all in the past," and "I wish him the best" and "I would send the motherfucker a congratulatory wedding present if I knew where the shameless gutter rat had crawled off to."

Let's face it: It's tough to let go of the past completely, or we wouldn't collect a colorful assortment of Facebook frenemies or Google the ex-girlfriends of long-lost ex-boyfriends to see how their boob jobs have weathered the storm of the childbearing years.

If Michael Jordan, the best basketball player in the history of the game and also one of the hottest men on the planet, can still relive the rage of being left off the Sports Illustrated cover more than two decades ago, how can mere mortals like you and me be expected to forgive and forget?

Revenge may be pathetic, but that doesn't mean it's not sweet. And these days, it comes with a big, fat paycheck attached.

The Russell Index
The vengeful avengers of the world found their natural leader last week when "Survivor: Samoa" premiered and one of the players, Russell, announced his intention to make everyone in the game, including his teammates, miserable.

Naturally, longtime fans of "Survivor" (8 p.m. Thursdays on CBS) assumed that Russell was making the usual big claims to utter ruthlessness, just like the countless other players over the years who sounded just like Ming the Merciless until it came time to making kissy-face with some cuddly fellow player. Even Johnny Fairplay, who lied and said his grandmother died to win sympathy from his fellow contestants, wasn't openly unkind to anyone else in the game. Hell, even card-carrying sociopath Richard Hatch, who lamented repeatedly that he despised his opponents, walked around naked despite groans of protest, and eventually did hard time for tax fraud, never really rocked the "Survivor" boat all that vigorously.

Surely, Russell was just another poser to the sociopathic crown.

Next thing you know, though, Russell is secretly emptying the water out of all his teammates' canteens while they're sleeping, even stealing one teammate's sock and setting it on fire. Then he runs around forming "exclusive" alliances with three women on his team at once. "My strategy is to be able to have a secret alliance with each one of these dumb girls," he explains. "I got an alliance with the dumb short-haired blonde, the even-dumber long-haired blonde, and the dark-haired girl. I like to call it my Dumbass Girl Alliance."

Next, Russell tells his teammates that he lived in New Orleans when Katrina hit. "I grabbed my axe, because as a fireman, one thing you learn is, when you go in something, you have to be able to get out." Then he gets to the sad part: He lost his German shepherd, Rocky, to the flood. His teammates gasp! How terrible.

"I never lived in New Orleans, I'm not a fireman, I've never even had a German shepherd," Russell tells the camera afterward. "I'm really a multimillionaire. I own an oil company in Houston. I'm not here for the money. I'm only here to show people how easy it is to win this game."

Yes, "Survivor" fans, this is the bona fide vengeful dickhead that we've been waiting for all these years. Because we all want to know: Can you be a complete asshole and still win at the game of "Survivor"? Russell seems to think so. "I plan on making it as miserable as possible for everybody. I figure that if I can control how they feel, I can control how they think."

But the question remains: Who is Russell trying to avenge with these random acts of assholitude? Is he angry at the entire universe? And why is he telling everyone about everything he does?

Although Russell is mean and claims to be rich, it remains to be seen how smart he is. Not surprisingly, within the first few days of the game, he's already made an enemy in Betsey, a cop who quickly surmises that he isn't trustworthy. He also raises a lot of hackles by pulling too many different players aside to talk to them in private. In this game, such a notable lack of discretion might end up being a big problem.

On the other hand, in the second week of the game, Russell finds the immunity idol without any clues – he just looks inside a hollow tree near camp. He pretends to cooperate with teammate Ben, whose nasty, blatantly racist remarks about a fellow player make him a natural rival to Russell's sociopathic crown. But Russell chuckles behind the scenes about how Ben is losing favor with the team.

Russell will probably go reasonably far, but he doesn't seem likely to bring home the million-dollar prize to add to his huge stack of cash. But in the game of life? Russell is guaranteed to win big, because never before at any time in history has it been more lucrative to be a vengeful.

Wake up, little Suze!
Just look at Suze Orman, who takes revenge on money itself every single Saturday morning on CNBC by making us all her captive slaves, doomed to spend the balance of our days socking money into a retirement account, never, ever spending so much as a few dollars on something frivolous or pointless without quickly calculating the hundreds of retirement dollars we're losing when we do.

Now personally, I love Suze Orman. I don't know what money ever did to her to make her so mad, and I don't even care. Sure, she slept in her car for a while and probably pawned her mother's one pair of dentures and dolled out sexual favors for spare change. Who didn't? All I know is that Suze Orman is disgusted with the rampant wasting of money and crappy financial planning that goes on out there, and when you watch her, you'll be disgusted, too --- with yourself!

Now, I don't expect all of you to savor the warm, chewy goodness of self-hatred quite as much as I do. All I know is that, even during these troubled times, in this economy, when we can all become instantly depressed after a simple trip to the grocery store, there's nothing better at the end of the day than opening up an icy cold Peroni (that's imported Italian beer I can't afford), taking a sweet sip, firing up "The Suze Orman Show" on my TiVo and listening to Suze berate ordinary human beings with even less financial sense than you and me. It boggles the mind, but they're out there, ready to purge us of our guilt over our own crappy decisions and nonexistent eight-month emergency funds.

My recent favorite was the guy who wanted to blow his life savings just to upgrade his fiancée's engagement ring to a tacky three-carat monster. Suze tells him he's an idiot, flat-out, all the while calling him "boyfriend."

But speaking of boyfriend, Suze's favorite type of caller is Monica, the hapless woman who cosigned her ex-boyfriend's car loan and now pays $950 a month to finance his BMW, which is now in her possession.

"Nine hundred and fifty dollars a month. What kind of a BMW did he buy, an $80,000 or $90,000 car?!" Suze asks, incredulously. "All right, before I tell you how to solve this or whatever, what were you thinkin'?! You wanted to have a boyfriend and possibly a husband who wanted to drive a fancy shmancy car, and he needed his girlfriend to cosign for him?"

I love it when even Suze's mind is blown at how one casual, careless decision can lead to total financial ruin. Thanks to the fact that, if the car is repossessed, Monica will end up owing $40k with no car to show for it, Suze advises her to file for bankruptcy.

Suze's right, money can be a ruthless bastard. But she's not about to let money off the hook for what it did to her. She's going to spend every second of her free time grinding money's face into the rug until it cries "Uncle!" Isn't it unfair how some people's secret demons make them rich, instead of just making them fat and twitchy like the rest of us?

"Oh, I get it," said my 13-year-old stepson during a recent broadcast, when Suze got to the part about not funding your kids' college funds and not even paying for their guitar lessons unless you're already maxing out your retirement contributions. "Suze Orman thinks it's stupid to give your kids money, at all! Don't teach your kid to play guitar. Save it all for yourself!"

"No, honey, she's saying that unless you want your decrepit, smelly, incontinent daddy to move into your den and hog your PlayStation for the rest of your life, unless you want to wipe his chin and empty his bedpan every few hours, he'd better get smart and start socking away retirement money immediately."

Ahh! It feels so good to talk tough about money, even when it makes everyone hate your guts.

Maybe because it's supposed to be sort of amusing and clever the way Hank wanders around getting drunk, flatly insulting people and sleeping with their girlfriends. But why would he do that if he weren't seeking revenge? It's unclear.

And why, if he's really a writer, does everything out of his mouth sound so unoriginal and clichéd? Why is he so repetitive in his aggressive streaks? Why is he so boring, for a sociopath?

He flicks his cigarette at a bicyclist who's hogging the road, only to find out he's the professor father of his daughter's friend. Get it? He's a rebel, an outlaw, the kind of devil-may-care stud who hates tree-hugging professorial types!

"Hey ladies, no Mary Jane." He tells his daughter and her friend in front of the friend's parents, "I'm like a drug-sniffing dog with a hard-on for justice." John Phillips aside, what father uses the word "hard-on" when addressing his daughter? Villains can be so entertaining – Al Swearengen of "Deadwood" is the first and best example that springs to mind. But thanks to the tone-deaf writing here, Hank Moody is not only far less interesting than your average drunken, over-the-hill frat boy, but he's also far more repugnant.

Maybe this is Showtime's way of avenging its loyal audience, the fans who tune in for "Weeds" and "United States of Tara" and "Nurse Jackie" despite the fact that their flaws seem to multiply, week by week, like drug-resistant bacteria.

Or maybe the shallow, wilted, lowest-common-denominator lameness of "Californication" is meant to make those other shows appear witty and clever by comparison (and it most certainly does).

Who can tell? Because revenge, like a fine wine, is complicated. It's also sweet – even a little too fruity for most palates – with a strong finish of regret and self-loathing. So while the vengeful avengers of the world gain fame and fortune from their vengeance, let us all savor the honor and dignity and extreme poverty that come from keeping our fat mouths shut.