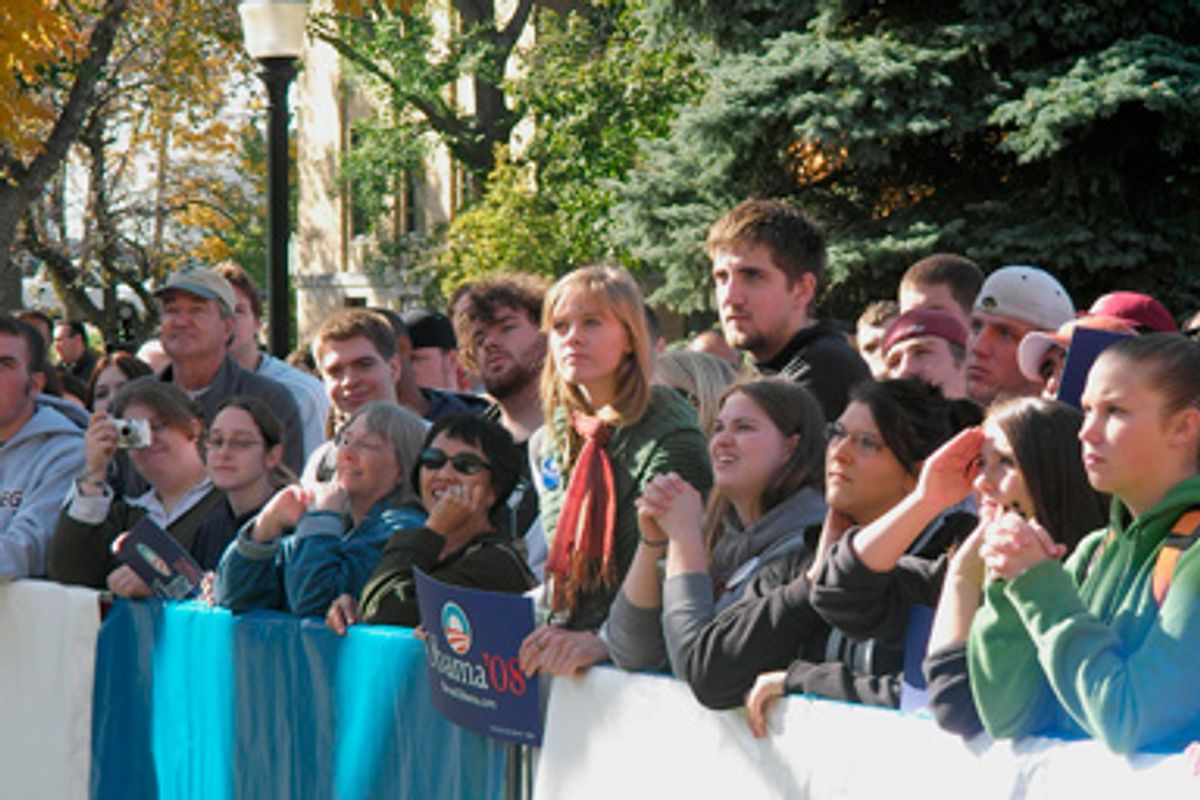 Younger voters -- those in the under-30 crowd like me -- invested an incredible amount of energy and enthusiasm in the 2008 elections. More of us came out to vote than ever before. We gave not just our votes but also our shoe leather and time as campaign volunteers. We showed up at campaign events by the thousands. And nearly one in 10 of us donated money to a presidential candidate. As young people, we are discovering a civic voice all our own, with unique perspectives on many of the challenges facing the country, and have become a powerful part of the electorate.

The Supreme Court, which begins a new term on Oct. 5, is working on a final decision in a case that could radically threaten our ability to make much difference in politics. In Citizens United v. FEC, the most important issue is whether the court will overturn rules that govern corporate electioneering -- that is, ads that support or oppose a candidate. For decades, legislatures and the courts have sought to limit corporations' and unions' spending in elections. This is because these groups' disproportionate ability to spend massive sums can distort the electoral process.

For decades, Congress has secured the integrity of our democracy by requiring that corporations and labor unions wishing to fund advertisements supporting or opposing candidates do so through political action committees. Instead of allowing corporations to funnel monies directly from company coffers into campaign war chests, PACs are funded through individual contributions. Campaign finance law makes it harder for corporate cash to crowd out the voices of groups -- youth voters, grassroots activists, minorities -- who are without ready access to reservoirs of money.

The Supreme Court has so far upheld this balance. The precedents in two cases, McConnell and Austin, that the court is currently considering overturning in the Citizens United case are only the latest in a long line of decisions regulating corporate expenditures in elections. But the most recent of those cases, McConnell, was decided in 2003, and the court's composition has changed. With a new majority -- specifically, with Samuel Alito and John Roberts replacing Sandra Day O'Connor and William Rehnquist -- the Supreme Court now appears to be considering an about-face on the constitutionality of much of campaign finance reform. (A lower court just struck down some campaign finance reform in Emily's List v. FEC.) If the court overturns precedent as radically as many fear, corporations and labor unions could be able to support or oppose candidates with funds right out of their treasuries.

Why does this concern younger voters like me? While our political idealism and passion run deep, our pockets generally do not. We do give what and when we can, but we certainly cannot afford to match the kind of massive expenditures corporations and unions can make. Even as it is, the financial contributions of younger voters to successful candidates often represent just a tiny part of what those candidates end up raising. According to the Campaign Finance Institute, all small donors of any age account for only 6 to 22 percent of the funds collected by Democratic and Republican senatorial candidates.

The much discussed "small-donor revolution" of the 2008 election, however, signaled a hopeful change toward a broader base of support for campaigns. An increased emphasis on smaller contributions was a natural outcome of the campaign finance laws now under threat. Limits on the size and source of contributions pushed political parties and candidates to the grass roots, and to youth, for a broader base of support. Young people played an important role in this shift. Tens of thousands of young first-time donors gave contributions as small as $10 and encouraged others to do the same. In the aggregate, this made a big difference, not only because candidates had to cultivate young people and pay attention to their views, but also because it gave young people the feeling of being stakeholders in politics and in civic life.

But a bad outcome in the Supreme Court case would dramatically reverse all this. Giant vested interests in industries like telecommunications, education, finance, energy and healthcare could make unlimited expenditures to elect or defeat candidates, all depending on how those candidates vote. The scale of the difference is almost unimaginable, on the order of hundreds of billions of dollars, more than enough to overwhelm the impact of small donors and drown out any future political opposition to corporate interests in the country.

We as young voters stand out for our opinions on war, climate change, civil rights and the role of government. And as a group, we face our own unique set of problems. To take an example from the current focus on healthcare, over 13 million of us do not have health insurance, making young adults the nation's largest group of uninsured Americans. On top of this, we have on average more debt, mostly from student loans. On a more basic level, we have the most direct stake in the future health of our planet.

The question is, Will younger voters, or any other economically disadvantaged group, be able to influence government to address these issues if the ability of corporations and labor unions to influence politics is made even stronger? Will the candidates with our interests in mind be able to compete with opponents backed by wealthier interests?

If the Supreme Court decides to overturn a century of precedent, the answers are bleak. But the young people who found their civic voice in the last election are unlikely to remain silent now. We may not be able to influence the way the Supreme Court votes, but we can stand prepared for the worst. Voluntary public funding for campaigns is one response we can call on Congress to make to the court's decision. While opening the floodgates on modern corporations' ability to fund electioneering would have unprecedented consequences, well-designed public funding systems could at least give serious candidates a better chance to compete, even if their stances aren't popular with wealthier interests. Public funding would also help allow the grass-roots activities we young Americans proved ourselves so capable of in 2008 continue to make a significant difference. In short, it would help ensure that we still matter to our democracy, no matter how the court rules.

Nate Frentz is the Grant Writer for the Brennan Center for Justice at NYU School of Law.