An official of the graveyard keeps sending work to the same small group of associates, with few results 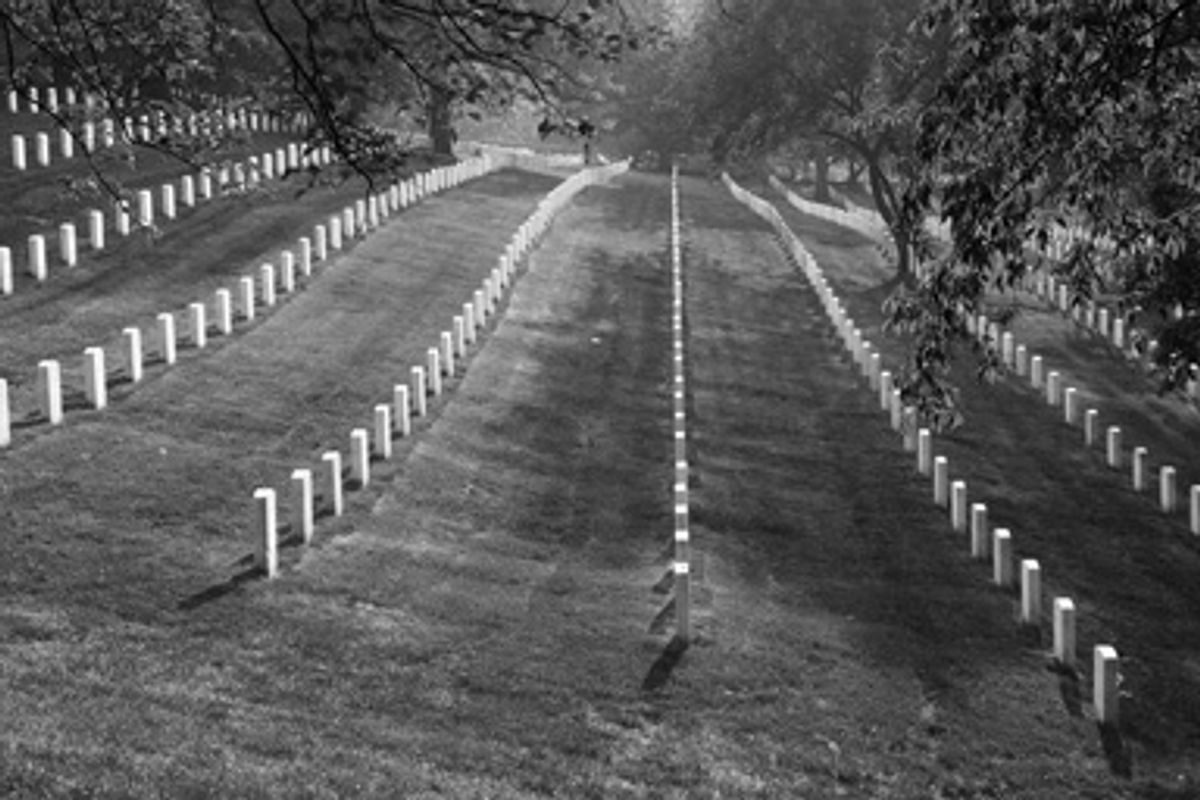 A top official at Arlington National Cemetery steered millions of dollars to a handful of contractors operating a series of different companies over the past several years. When the contractors would leave one company and start another, the official would hire them again, yet the work they were hired to do has never been completed. The firms have ostensibly worked since 2003 to computerize burial records at the cemetery, but to date, despite receiving as much as $5.6 million, they have produced almost nothing in return.

The small group of contractors, all favored by Deputy Superintendent Thurman Higginbotham, includes one currently facing more than a dozen counts of child sex offenses and a company that a cemetery information technology manager felt was so unqualified to handle sensitive private data that the manager resigned in disgust.

Since the contractors have failed to produce, the cemetery continues to rely on a flurry of paper records in an attempt to keep up with around 30 burials a day. Paper goes missing, current and former workers there say, resulting in burial fiascoes that occur with disturbing frequency.

For example, Salon reported this past summer on workers who went to bury a service member in an active part of the cemetery only to find unknown, unmarked remains already there even though paper records said the grave was unoccupied. The cemetery at first claimed such things do not occur. When Salon produced the grave card labeled "CASKET IN GRAVE REMAINS UNKNOWN," and photos of the unmarked grave, the cemetery admitted the error -- but insisted that is the only case.

In a 2008 report to Congress, the cemetery admitted to poor record-keeping across the cemetery, including Section 60, the final resting place of troops killed in Afghanistan and Iraq. "There are numerous examples of discrepancies that exist between burial maps, the physical location of headstones, and the burial records/grave cards," the report admits. Despite that admission and the claims of current and former employees, top cemetery officials insist the correct remains are always beneath the headstones above them.

The process of trying to address Arlington's record-keeping problems by computerizing the burial process has been under way for at least six years The cemetery's de facto boss, Higginbotham, has spearheaded the computerization efforts. The plan is to duplicate operations at other large cemeteries that already electronically handle burial records and next-of-kin data and track grave locations via satellite, making foul-ups far less likely.

Electronic systems to record grave information and track grave locations via satellite are relatively common. The Spring Grove Cemetery in Cincinnati, for example, is a similar age and size to Arlington and has used computer systems and satellites to track graves for years. That cemetery did not return calls for comment on the cost of implementing that system. The Department of Veterans Affairs, which maintains more than 2.9 million grave sites at 130 national cemeteries in 39 states, tracks information on graves through its electronic Burial Operating Support System. In fact, family can track the locations of many veterans' graves right off the V.A. Web site using the "Nationwide Gravesite Locator." Arlington, which contains the remains of roughly 320,000 service members and their families, is run by the Army. The cemetery Web site does not offer any matching capability because it does not exist.

Interviews, internal cemetery e-mails and budget documents show that since 2003, to do this work Higginbotham has guided millions of dollars to a small cast of contractors operating under a succession of different company names. The contracts were also awarded through a bidding process that either eliminates any competition for bids or tightly limits competition. Internal e-mails show Higginbotham appearing to exert complete control over the awarding of the contracts. The companies, however, have produced almost nothing and the cemetery still relies almost exclusively on pieces of paper to track operations, leading to mistakes like the kind uncovered by Salon.

Under Higginbotham's direction, the cemetery seems to have awarded some, if not all, of the contracts to computerize operations to companies designated as small, disadvantaged businesses. The Small Business Administration designates such firms as "8(a)" companies. The firms can compete for specially set aside government contracts under reduced or no competition.

In 2003, the cemetery hired a company called Standard Technology Inc. to begin the work. The project manager was someone described by cemetery employees as a Higginbotham favorite at that time, Richard Greaux. Within a year, Greaux struck out on his own, founding his own Manassas-Va.-based company, Offise Solutions Inc. The contract followed Greaux there.

Records from the Small Business Administration show the agency granted Greaux's company, Offise Solutions, the small, disadvantaged 8(a) status on July 12, 2005. "We are official," Greaux e-mailed Higginbotham that day. "At last," Higginbotham fired back.

For reasons that remain unclear, in late 2006 Higginbotham and Greaux had an apparent falling out. Higginbotham steered the work to another company. An internal e-mail from a cemetery employee to Higginbotham on Sept. 8, 2006, asked about Greaux, "Do you still want him to be the 8A firm that does this?" The employee asked Higginbotham in that e-mail whether to drop Greaux, asking if Higginbotham "wants to consider another firm."

Higginbotham typed back on his BlackBerry: "Yes. ATG."

He was referring to Carlton Wells, who at that time was the chief operations officer at a company called Alpha Technology Group, with offices in Waldorf, Md., and Newalla, Okla.

E-mails show Higginbotham saying that the contract would go to ATG with no competition from other firms. An e-mail from Higginbotham to a government contracting official on Sept. 6, 2006, says, "It is my understanding that we are going sole source 8a." Sole source refers to a contract granted with no competition, a process carried out when only one firm can possibly perform the work. (Other companies can computerize burial operations using satellites and have done so successfully at other cemeteries.)

Once hired, Wells and Higginbotham worked closely with another ATG employee, Bobbie Garrett, to perform much of the nuts and bolts computer work at Arlington. In 2008, however, things got messy for Higginbotham and ATG. In October 2008, the Army Criminal Investigation Command launched an investigation into the cemetery after someone at Arlington impersonated Gina Gray, a former spokeswoman for the cemetery, online, and Gray appealed to Army investigators.

The Army investigation ultimately found wire fraud at Arlington and said Higginbotham had Garrett hack into Gray's government computer. Investigators were able to determine that Garrett had hacked into Gray's computer on Higginbotham's behalf and found e-mails from Higginbotham containing information from that computer, but could not prove conclusively that either of the men was the person who had sent out e-mails using Gray's account, pretending to be her. Investigators also cited Higginbotham for "false statements" during the probe, though the U.S. Attorney's Office for the Eastern District of Virginia declined to prosecute the case.

Garrett resigned from ATG soon after the Army investigation started. When Army investigators sought to interview Garrett, the company said he was away, visiting his sick mother in Ohio. Investigators never found him. At some point during this period, though it is unclear exactly when, Wells also left ATG.

Records show that Wells and Garrett later teamed up again and quietly incorporated a new company, Optimum Technical Solutions, in Jacksonville, Fla., on March 18, 2009. In June, cemetery officials recently confirmed, Arlington hired Optimum Technical Solutions to do more of the same kind of work computerizing records, giving the firm a four-month contract worth $193,000.

That work was likely disrupted, however. U.S. marshals arrested Garrett on July 31 as he walked off a plane in Columbus, Ohio. He faces trial in December on more than a dozen counts of child sex abuse in Charles County, Md. Also that month, the former I.T. manager at Arlington resigned after Higginbotham forced the manager to ship two computer servers to Wells and Garrett in Florida containing the personal data -- including Social Security numbers -- of thousands of deceased soldiers and contact information on their next of kin. The I.T. manager quit after warning Higginbotham that the shipment violated privacy law.

Higginbotham and the revolving cast of contractors have almost nothing to show for the years-long effort to computerize burial records. Burials are managed by distributing dozens of paper schedules and more than 100 paper cemetery maps, according to cemetery documents. A report to Congress from fiscal year 2008 shows the cemetery had already spent $3.7 million on the project by the end of fiscal year 2006, and expected to spend an additional $1.885 million through fiscal 2009.

Higginbotham has refused to talk to Salon throughout the continuing series of articles on the cemetery. While Garrett was released on bail on Aug. 19, his whereabouts remain unknown. Wells declined to talk about the contracts, calling his work for the cemetery "a private matter." Greaux confirmed his work for the cemetery, first at STI and then Offise Solutions, but then wouldn't discuss anything further, saying, "I'd like to talk to Mr. Higginbotham first."