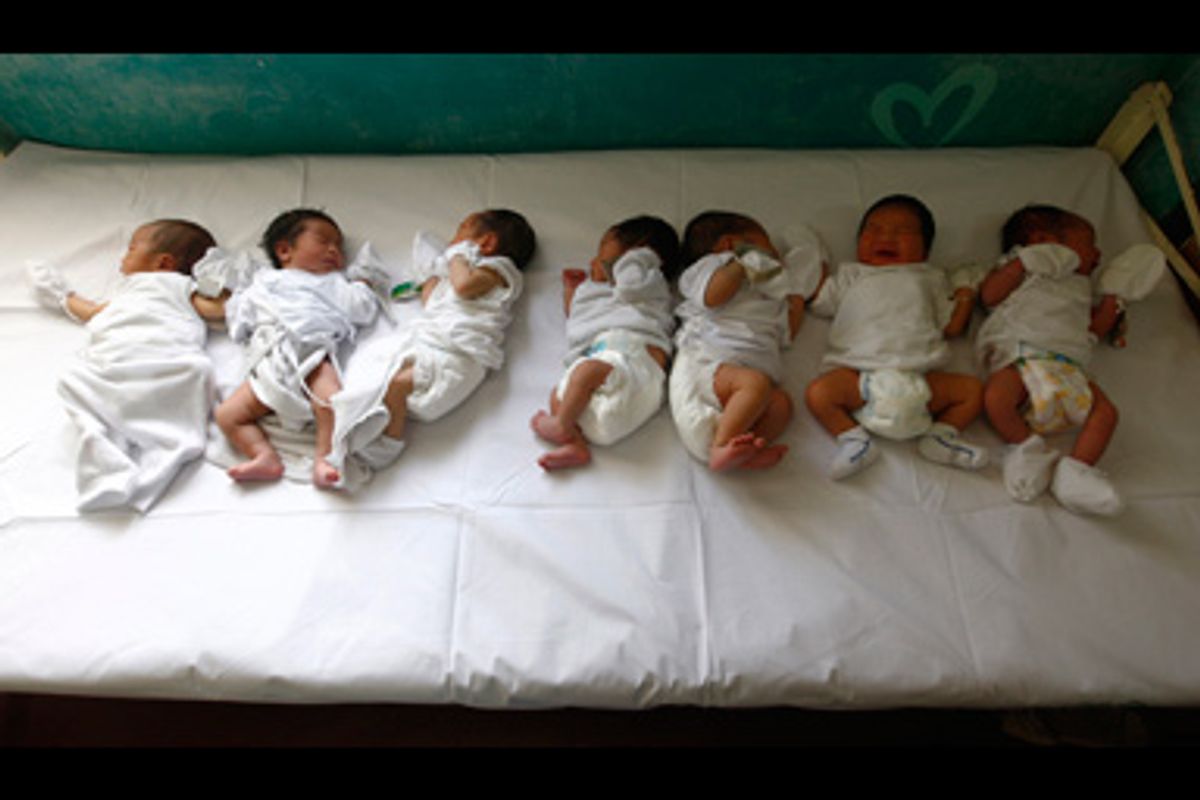 Babies rest on a bed inside a maternity ward at a hospital in Manila November 14, 2008.
--

Recent research has demonstrated that among the many strategies that need to be brought to bear to reduce global warming, one of the most humane and cost-effective would be meeting the global need for contraception. Two hundred million women worldwide are without it as they try to prevent becoming pregnant.

But if President Obama tries to include family planning in any attempts to address climate change, he's likely to face another thorny battle with the religious activists who supported his election. Religious leaders, even evangelicals, have jumped on the climate-control bandwagon but remain at best unwilling to admit the important role that family planning could play in achieving a smaller human footprint on the environment. At worst, they are actively opposed to expanding contraceptive possibilities for women in the developing world.

A study by Thomas Wire of the London School of Economics, "Fewer Emitters, Lower Emissions, Less Cost," commissioned by the U.K.'s Optimum Population Trust, demonstrates the impact that improved access to birth control could have on the planet:

[E]ach $7.00 spent on basic family planning over the next four decades will reduce CO2 emissions by more than a ton. To achieve the same results with low carbon technologies would cost a minimum of $32.00. If we just meet that need that women have already expressed for fewer children and access to contraception, we will save 34 gigatons between now and 2050, equivalent to nearly six times the annual emissions of the US.

Were this 1960 or even 1990, there would be understandable and widespread opposition to the idea that the way to solve environmental problems is through contraception. During that era, conventional wisdom held that the world faced imminent crisis unless we drastically reduced the number of people competing for land and food, and it became easy to justify draconian measures to control female fertility. Women's rights activists, for example, had long reported on the negative effects that an obsession with reducing population had on women.

In 1983, the United Nations awarded China its first annual Population Prize, willingly overlooking the massive human rights violations that accompanied China's one-child policy. Massive forced abortions, sterilization following the birth of the first child, houses bulldozed to find and punish those who violated the policy offended the conscience of women's rights advocates. Less draconian policies in Peru, Indonesia, Bangladesh and India were cited by human rights advocates as examples of what happens when having "too many people" is defined as the problem -- and reducing their numbers is seen as an easier solution than compelling those of us in the developed world to reduce our consumption, or forcing corporations to stop clear-cutting forests.

Family-planning programs in many developing countries that received foreign assistance from the developed world were often sub-standard, offering women no choice but whatever contraceptive was being pushed at the time, usually a long-acting method that women could not control. Developing country governments, eager for the funds, set targets that poorly paid family-planning workers had to meet in order to get a bonus. If they could convince a woman or her husband to get sterilized the bonus was even higher. After all, the experts admitted, consumption and corporate greed were responsible for a hell of a lot more environmental degradation than poor people having kids -- but stopping Japanese and American lumber companies from chopping down trees in Brazil was too difficult. And, even if population programs were occasionally coercive, many believed they were in poor people's interests as fewer babies meant less poverty and more opportunity for women and families in the developing world.

But the other side of the coin, even in those early years, was always the undeniable fact that women wanted family planning. It improved their lives. As individual family size dropped, families were able to send girls as well as boys to school, girls got married later, women entered the workforce and their physical health improved.

Steve Sinding, former director of USAID’s Population and Reproductive Health program and an ardent advocate of rights-based family-planning programs, stresses that such programs have been a global success story, comparable to the Green Revolution and the eradication of smallpox. Along with four former USAID program directors, he issued a recent report that describes successes between 1965 and 2005. Excluding China, they note that during those 40 years, the use of family planning by women of reproductive age in the developing world rose from 10 percent to 53 percent and average family size from six children to just over three.

A major paradigm shift in the population and development field has achieved great changes in the quality of family planning programs over the last 15 years. The U.N. Population Fund and women's health activists shifted the conceptual frame for family planning from demographic imperatives to human rights, resulting in the end of officially sanctioned targets for sterilization and family planning and to a basic women's health approach in which choice and voluntarism were key values. Population control was out and reproductive health was in, and many of the objections to past family programs were mooted.

But the shift in paradigms, while it improved the quality of many services, did not solve some stubborn problems. Certain statistics remain constant. Half a million women a year still die in childbirth and 200 million women who don't want to get pregnant still do not have access to family planning. And the change in emphasis also came at a stark economic price. When we started framing reproduction as a health and human rights issue instead of a population, environment and national security issue, the money dried up. The funds moved to other issues.

In the same time period that we dramatically reduced the death rate from HIV and AIDS, we have made no progress -- no progress at all -- in reducing maternal mortality. And, although the cost is minimal, $3.9 billion a year to meet that unmet need for contraception, it is not forthcoming.

Will linking climate change to family planning help women at the same time it helps the planet? If we can't convince governments to support family planning because it is good for women, perhaps the mounting evidence that contraception is almost five times cheaper than conventional green technologies as a means of combating climate change will do the trick. And can we avoid a resurgence of the old order where women too often became the means to someone else's ends?

Most feminist leaders think we can keep providing quality services and preserve the world's commitment to the basic human right of women and couples to decide freely on the number of their children. This is, many tell us, the century of women.

So where is the remaining resistance to acknowledging family planning as one of the solutions to climate change? There is well-placed concern that once again, the developed world will not deal with its own consumption problem, but instead put pressure on poor people to have fewer children, even though we know that all those poor people leave a very small carbon footprint compared to Americans. We, after all, applaud the one-child policy in China but would consider a one-car-per-family-of-four policy in the U.S. a violation of our basic human rights.

I vividly remember a press conference where the then-head of the Audubon Society refused to stand next to Gloria Feldt, the then-head of Planned Parenthood. More recently, asked by the Washington Post to react to the London School of Economics report about climate change and family planning, David Hamilton of the Sierra Club responded, "I don't know how to say 'no comment' loud enough."

That may be why the Obama administration is not biting. When asked by the Washington Post about the recent studies, the administration declined to comment. I suspect the president needs to consult with his faith-based council about whether the religious community that he has so diligently courted on every issue under the sun, including climate change, is willing to support family planning -- an issue totally lacking in controversy for most Americans. Over 90 percent of women use contraception at some point in their reproductive life. In the 50 years since the pill was introduced, the U.S. fertility rate has dropped by nearly half, from close to four children per woman to two.

It would seem to me that increasing funding for international family planning as well as for low-income women seeking family planning in the U.S. is a win-win proposition. We could help women avoid pregnancy when they are not ready to parent, prevent abortions, reduce maternal mortality worldwide and reduce CO2 emissions. That $47 cost of abating a ton of CO2 emissions through family planning compares favorably to $24 for wind power and $451 for solar and $91 for plug-in hybrid vehicles. This is surely a no-brainer.