Talking about Iran on the TV

Who is the belligerent and war-threatening party in the Middle East?

Earlier this morning, I was on MSNBC, on Dylan Ratigan's Morning Meeting program, discussing Iran.  Although I didn't know beforehand, the person charged with making the case that Iran is a Grave Threat was . . . Arianna Huffington.  Also on the panel was Washington Post Editorial Page writer Jonathan Capehart.  Here's what ensued:

Just today, a columnist in Capehart's paper, Richard Cohen, suggests we may have to attack Iran.  Over the weekend, another columnist in Capehart's newspaper, David Ignatius, beat his chest and roared:  "It’s hard to see how this one will end short of military confrontation if the Iranians don’t start bargaining for real."  Last week, Capehart's Editorial Page published an attack-Iran Op-Ed from two former Senators (one from each party) who have spent the last year advocating a detailed plan for blockading, attacking, bombing and invading that country.  The same day, Capehart's boss, Editorial Page Deputy Editor Jackson Diehl, said that Israel's so-called "success" in its attack on Gaza may/should create the view that "even a partial and short-term reversal of the Iranian nuclear program [via an air attack] may look to Israelis like a reasonable benefit."

And, oh yeah -- we're currently occupying two Muslim countries on either side of Iran, having invaded them many years ago.  There's nothing Iran has done that we and our clients/allies haven't done ourselves to a far greater extent.  But remember:  it's Iran that is run by people with crazy, belligerent, fanatical, war-loving sentiments and is therefore a grave threat to world peace (imagine if Iran had invaded, bombed and then spent the last eight years militarily occupying Canada and Mexico, only for Iranian media elites to keep insisting that it was the U.S. that was the rogue state run by aggressive fanatics who threatened world peace).

UPDATE:  This person points out the irony that -- unbeknownst to me -- the entire time when I was speaking, MSNBC was flashing scary video of Iran testing its missiles (though it omitted video of this and this), interspersed with this melodramatic and frightening caption: 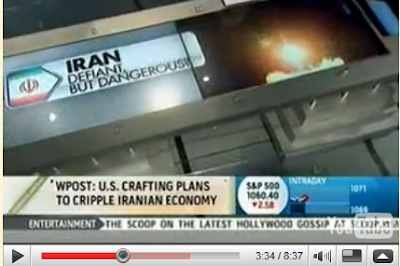 It's genuinely hard to overstate the effect of visuals like this, transmitted over and over and over to a population.  And that's on the "liberal" MSNBC.

UPDATE II:  Also worth watching:  Scott Ritter, this morning on Democracy Now, discussing the hysteria being generated about Iran.

UPDATE III:  In Salon today, Juan Cole documents the numerous myths being used to feed hysteria over Iran, and -- yet again -- debunks the claim that Iran has been threatening a first-strike against Israel.