Is Obama man or mouse? 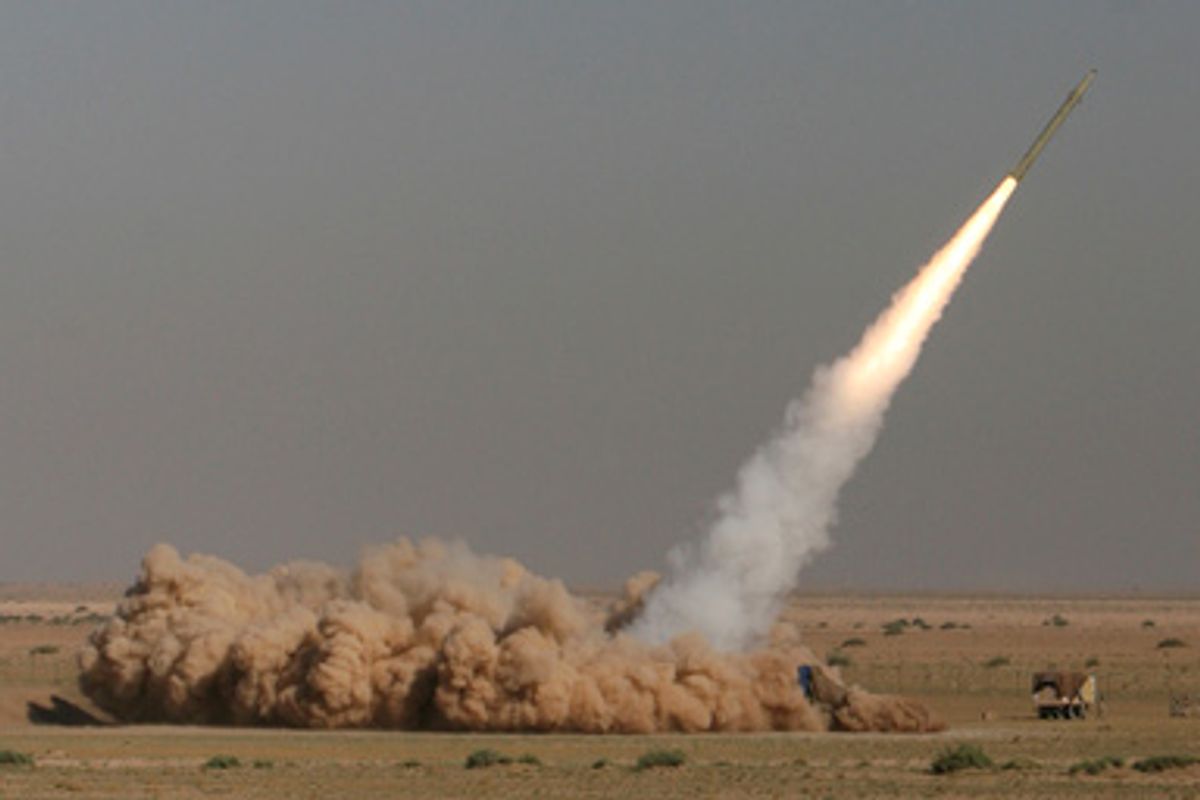 Iran said it successfully test-fired short-range missiles during military drills Sunday, Sept. 27, 2009 by the elite Revolutionary Guard, a show of force days after the U.S. warned Tehran over a newly revealed underground nuclear facility it was secretly constructing.
--

As October arrives, all Washington is aquiver with anticipation over the Obama administration's first autumn theatrical season. The theme, of course, is forever the same: Geopolitical melodrama. The eternal foreign policy "crisis" remains our capital's only indigenous art form. The capital's political pundits function as drama critics.

Deadly threats loom from third-world outposts on the far side of the world. Cartoonish despots like Iran's Ahmadinejad -- the Persian George Wallace -- orate at the United Nations, playing the nationalist firebrand for audiences in Tehran. The requisite chorus of hairy-chested American columnists and TV commentators chant fierce war cries from comfortably appointed studios.

This Obama: Is he man or mouse? Never mind that Iran notified the International Atomic Energy Agency of its newest nuclear facility, insists (dubiously) that it's for peaceful purposes and promised to admit inspectors. We've seen this movie a dozen times. This latest iteration, opines the Washington Post's Richard Cohen, "is the real crisis, possibly one that can only end in war."

TV news anchors gravely pronounce upon the "Iranian threat," as if a nation whose military budget totals less than 2 percent of ours, and which suffered millions of casualties defending itself against Saddam Hussein's mighty legions, seeks war with the United States. Or possibly with Israel, although detonating a nuclear weapon there would kill countless thousands of Iran's Palestinian clients, destroy some of Islam's holiest sites and bring a devastating counter-strike from Israel's nuclear arsenal. Skeptics are advised that Iran's (very unpleasant) leaders are "madmen," like Adolf Hitler.

"Only a fool -- or possibly a Frenchman," as Cohen famously wrote in 2003, "could conclude otherwise." Never mind that the Post columnist was then invoking the dread specter of Saddam Hussein's (nonexistent) "weapons of mass destruction." Also that we fools and Frenchmen turned out to be correct. Bogus intelligence and vapid cheerleading drove the United States into an unnecessary war.

As Glenn Greenwald never tires of pointing out, the key to a career as a "serious" Washington pundit is to have been spectacularly wrong about both the necessity and consequences of invading Iraq. As wrong as the neoconservative theorists of the Bush administration, whose motto before conquering Baghdad was "real men go to Tehran."

Seriousness also means never having to say you're sorry. Thousands of dead and wounded are as nothing next to the status and perquisites of Beltway celebrity. Thankfully, however, for all the hyperventilating, nothing's apt to happen about the Iranian "threat" except bluster and diplomatic maneuver. As overextended and bankrupt as the United States finds itself in Iraq and Afghanistan, hostilities with a third nation far larger than both would be pure folly. Obama's smarter than that.

Israel pretends to fear Iran to distract attention from its ongoing annexation of Palestinian land. Ahmadinejad postures against Israel and the West to enhance his regime's shaky hold over its own people. U.S., British and French officials exaggerate the gravity of the situation partly, I fear, for its entertainment value, partly to demonstrate their newfound partnership, now that George W. "My Way or the Highway" Bush has retired to his ran ... er, the Dallas suburbs.

Meanwhile, it's in Afghanistan where the Obama administration has to decide whether it can summon the political courage to reverse the primal error of the Bush administration's vaunted "war on terror."

It's simply not possible to make war on an abstract noun. Having panicked after 9/11, Bush/Cheney magnified al-Qaida, a band of stateless fanatics capable of mass murder, but not of warfare, into an existential threat as grave as the Soviet Union.

Failing to capture or kill Osama bin Laden, they attacked Iraq instead. That left U.S. and NATO troops underequipped and overexposed in remotest Afghanistan, previously a synonym for the end of the earth -- a land of 40,000 remote mountainous villages, extreme poverty, near-universal illiteracy, religious zealotry and endemic tribal warfare.

Afghans don't merely hate occupying foreigners; they see large numbers of their "countrymen" -- Uzbek, Tajik, Hazara, Turkmen, Baluch, Pashtun -- as foreigners, too. If Iraq would divide itself into three countries, Afghanistan might become eight or 10.

Unlike the relatively educated, urbanized Iraqis, moreover, most rural Afghans have nothing to lose but their honor. They see the Kabul government -- quite accurately -- as a nest of smugglers and thieves. They're historically as difficult to seduce as to subdue; bribery works best.

Can the "nation-building" proposed by Gen. Stanley McChrystal work there? It's doubtful. Furthermore, at what cost? Sure, he's gung-ho, optimistic and highly competent. That's how one becomes an Army general.

Whoever leaked McChrystal's report wanted him reminded of that publicly. It's political blackmail and should be disregarded.