Let's make it all Obama's fault 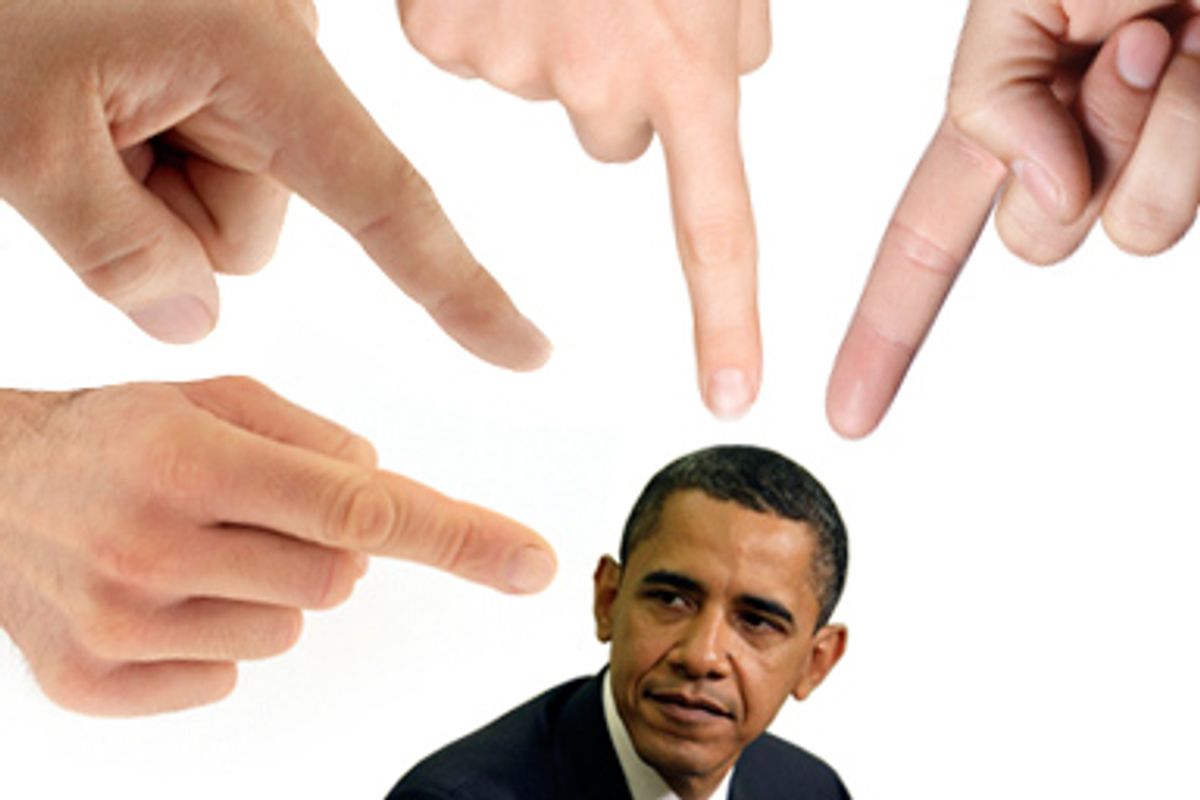 The list of Republican complaints against President Obama is, by now, fairly long. He's leading the country into socialism. He's doing too many things at once. He's not bipartisan enough. He's an enemy of humanity. And, of course, he bailed out Wall Street and the auto manufacturers late last year.

If that last item sounds a little odd, you may have been paying more attention to recent history than some GOP lawmakers have. Republicans have gotten so carried away lately with objecting to whatever the White House is up to that their rhetoric has sometimes seemed to be tinkering with the past. Though the Troubled Asset Relief Program and the Detroit bailout were both started by the Bush administration before Obama took office, the GOP is happy to lump those policies in with other gripes if it means voters grumble more. And policy problems Obama inherited when he took office are slowly, but surely, being transformed into his fault.

"We may be one more bailout away, one more so-called reform away, from losing our way as a nation of the people for the people and by the people," Senate GOP boss Mitch McConnell told like-minded conservatives at the Family Research Council's Values Voter Summit a couple of  weeks ago. He hinted that he knew the real facts, but papered them over pretty quickly: "These worries have been building for a long time, even before last year's election, but they reached a new level in recent months."

Other Republicans have sought to roll back TARP and end the assistance to G.M. and Chrysler -- both policies that began under Bush. (Alabama Sen. Richard Shelby actually blamed Obama explicitly for TARP over the summer.) Speaking at the same conference as McConnell recently, Rep. Michele Bachmann of Minnesota started talking about some nefarious, if nebulous, concept known as "bailout nation." Citing the work of an (unnamed) economist from Arizona State University, Bachmann said Obama was up to no good. "Prior to the inception of bailout nation -- in other words, less than one year ago -- 100 percent of private business profits were private. But since the inception of bailout nation ... with all the government takeovers -- the current mentality that rules Washington, D.C. -- 30 percent of private business profits are now owned or controlled by the federal government."

Of course, the problem with that line of attack is that TARP passed almost exactly a year ago, at Bush's urging and with votes from Republicans and Democrats alike. But why let logic get in the way of a good talking point? The GOP appears to be playing on voters' confusion for political gain. As far as some voters are concerned, the Wall Street bailout and the Detroit aid from last fall are just part of the Obama spending spree Republicans are always talking up.

"There's no question that there's some confusion about where [the bailouts] really started," one Democratic pollster said. "When people talk about the spending, mostly what they're talking about is those kinds of bailouts; it's the first thing they go to ... There's a certain amount of confusion between that and the stimulus. For some number of people, the bailouts are part of the stimulus. All those get conflated to some extent in people's minds."

Which could add up to bad news for Democrats. Obama's job approval ratings seem to be recovering from the bruising he took in surveys during August's town hall furor, but anything the GOP can do to pile lingering Bush resentment on Obama doesn't help. "Obama's [poll numbers] would be higher were it not for this bad economy," said Democratic pollster Mark Mellman. "People don't blame him directly [for Bush's economic policies], but it can't help but seep into their overall assessment."

The attempt to blame Obama for the whole state of the world isn't limited to TARP, though that's the most glaring example. Republicans routinely talk about the number of jobs lost since the administration took office, as if the entire recession started at the stroke of noon on Jan. 20. "Americans are asking, 'Where are the jobs?'" House GOP leader John Boehner said Thursday. "But since the 'stimulus' was signed, we've lost roughly 3 million private sector jobs, and we're nearing 10 percent unemployment." True enough. But you rarely hear the GOP mentioning that unemployment was at 7.6 percent in January 2009, Bush's last month on the job. Or that White House economists believe that without the stimulus, another million jobs would have been lost this year so far. Some GOP strategists even seem to have forgotten who was responsible for the federal government in August 2005. "Here is the government that gave us the compassion of the IRS, the efficiency of the Post Office, and the effectiveness of Katrina, and now they want to take over our healthcare?" Republican message guru Frank Luntz told Fox News' Sean Hannity after Obama's healthcare reform speech last month. "Sean, use those three together and you have got a powerful message." And sure enough, at the Values Voter Summit, the Family Research Council's Tony Perkins used the same line.

For Republicans, any confusion among voters who don't like the way things are going is, of course, just fine. The public is "putting that all into one bucket of 'Washington spun out of control,'" said GOP strategist Kevin Madden. "It allows us to realign ourselves with Main Street anxieties about Washington's inattention to spending ... independents are very aware of things like deficits, and they want to puke in their hats when they hear that the federal budget deficit this year alone is $1.4 trillion already."

But there could be another side to the blame game come November 2010, if the economy starts to recover and voters think the stimulus had an effect. A Democrat painted a picture of next fall: TARP funds being repaid, new jobs being created, the White House grabbing credit for all of it. "People are going to say, 'Well, I am seeing an impact, so it was a pretty good idea,'" the strategist said. If that all comes to pass, "the boil that is the bailout also gets lanced." Which basically means this particular political problem for Democrats, like most, could solve itself as the economy heals. Until then, though, don't expect Republicans to give up on revisionist history. After all, it's working so far.