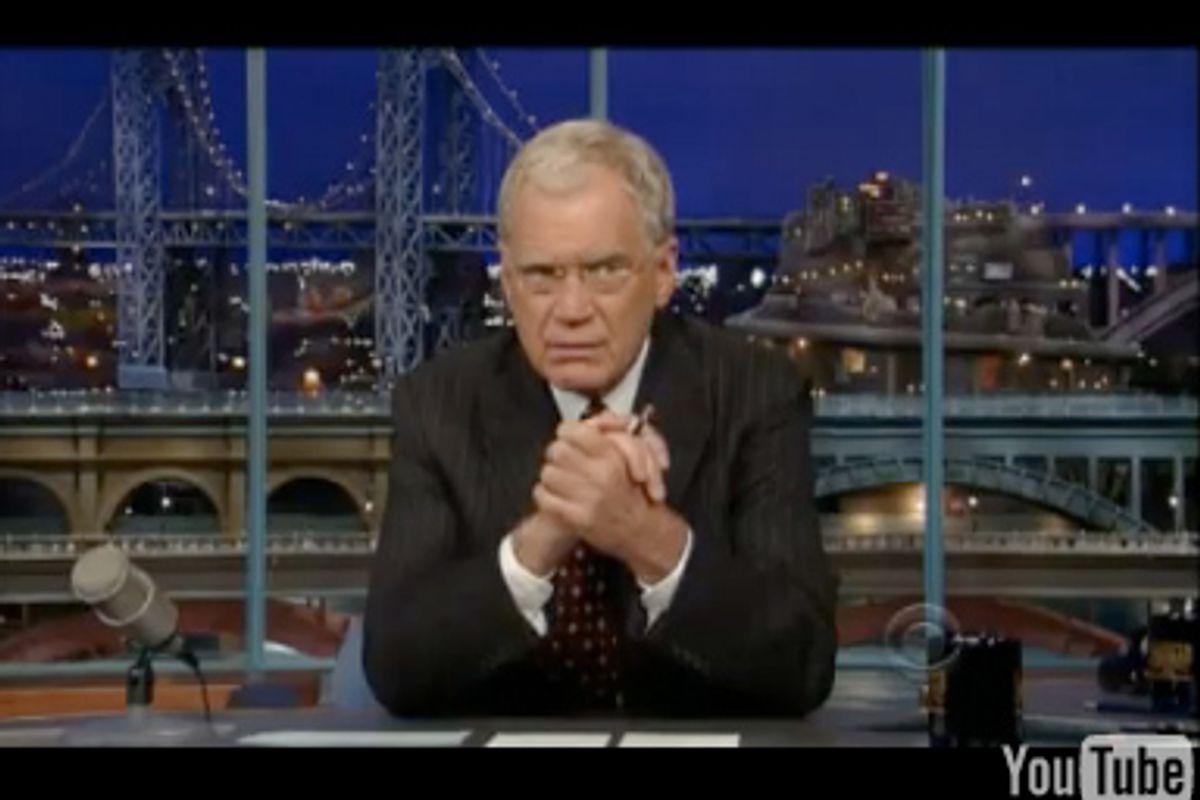 "Do you feel like a story?" David Letterman asked his audience last night. That's how it started. But what followed wasn't a witty anecdote involving Madonna or Sarah Palin. It was an admission of adultery and of being blackmailed. (Video posted below.)

Coming in from a commercial break, Letterman detailed how one morning a few weeks ago, he'd discovered a package in the back seat of his car containing a letter. It read, "I know that you do some terrible, terrible things."

The audience, still assuming this was just another jokey setup, continued to laugh. But as the story progressed, it became darker and weirder. A "phony" $2 million check to ensnare the blackmailer, testimony before a grand jury, the blackmailer's eventual arrest. Letterman then cleared his throat and said, "The creepy stuff was: I have had sex with women who work with me on the show." He paused again and continued. "Now, my response to that is, yes I have." And what did the audience do when their cantankerous, beloved and married host sat before them confessing to his dalliances with his colleagues? They applauded.

There were no Mark Sanford-style tears. No John Edwards-esque denials. No John Ensign-y contrite admissions that it was "absolutely the worst thing I've done in my life." No shame or blame.

Just some straight-up, self-deprecating honesty. What a pleasant change of pace.

Not everyone is laughing or applauding today, however. Michelle Malkin said on Fox & Friends that "it's hard not to have a smidge of schadenfreude," and the BeliefNet Prayer and Simple blog called Letterman's actions "an unethical abuse of power" and "a sordid and sick obsession for conquest." And you don't have to look too hard to find commentators (often with a decidedly pro-Palin bent) willing to call Letterman a "cheating scumbag."

His accused blackmailer, Robert Halderman, a 51-year-old Emmy Award-winning producer for CBS's "48 Hours," had until recently been living with former Letterman assistant Stephanie Birkitt. According to Gawker, among Letterman's special favors to Birkitt were paying her for law school classes. Whatever his motivation, Halderman allegedly threatened Letterman that his world was "about to collapse" from his "ruined reputation."

Yet it seems highly unlikely anything of the kind will happen. Unlike a number of public figures whose peccadilloes have been trotted out for the world to scrutinize, Letterman isn't a public servant. He didn't conduct his dalliances on the taxpayer's time or dime. So who cares? His show has been inching up in the ratings of late and his reputation is as an entertainer, not a moralist.

However, the man who has made great sport of the indiscretions of others, saying on his show that Mark Sanford "put himself above his family," is certainly now fair game for his fellow titans of late night. But beyond the comic jabs he may have coming, there seems little further retribution in store.

Letterman has in the past taken his private crises directly to his audience -- he's discussed the plot to kidnap his son and before that, his brushes with a stalker.  And although most people who aren't Mike Duvall don't go around bragging about their on-the-job conquests, Letterman has, even prior to last night's admission, expressed a droll candor about his relationships. A few weeks ago, when Anne Heche was a guest, she asked him about marriage. He dryly replied, "It's, you know, everything I hoped it would be" and added, "Some marriages, a pitifully small few, seem to work." The television icon, who didn't say when these sexual relationships with co-workers occurred, has been with the mother of his son, Regina Lasko, for 23 years, and married her last March. Last night he said he was going public with the story of the extortion attempt to "protect" his family.

It may be tacky and a potential H.R. violation to mess around with co-workers, but good luck living in a world where people don't do it. Work and sex go together like beer and sex. Beyond that, where David Letterman puts the contents of his Worldwide Pants isn't anybody's business.

It's not merely that Letterman is amusing, or has never set himself up as the voice of moral authority, or even that the attempted financial crime against him engenders sympathy. It's that there's zero indication he did anything that didn't involve consenting adults. There's zero indication of harassment or even duplicity toward his wife. Maybe it's not how you or I would roll, but it's his life.  Even as he referred to his actions as "creepy," he was direct and unapologetic and unregretful. And any one of us who've ever had a private life knows it's not for anyone else to judge. "Yes, I have had sex," he said. Cue applause.