Three cheers for the red, white and goo 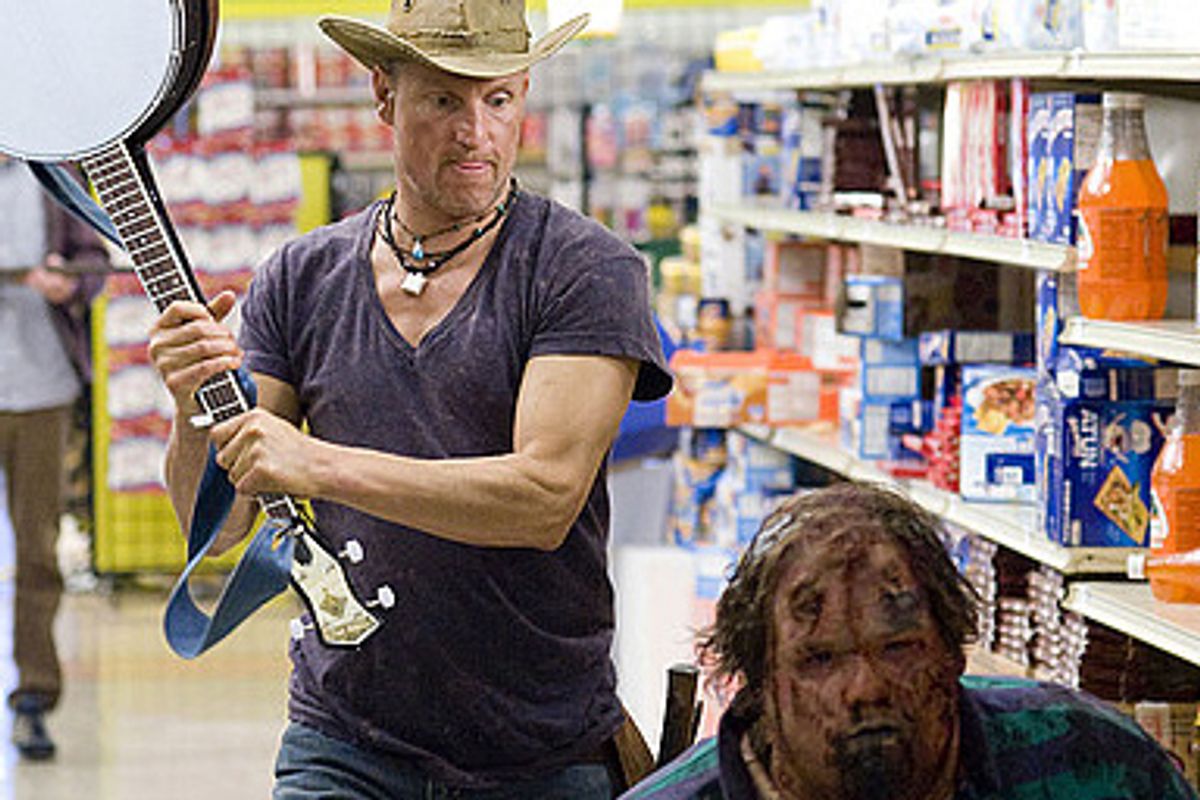 "Zombieland" may be the only movie in which the hero -- and he is a hero -- admits to suffering from irritable bowel syndrome. Is that oversharing? Or is it an earnest confession, the kind of intimacy you're willing to risk with a group of strangers -- in other words, us -- when you're living in a world that's become overrun with flesh-eating zombies?

I'd say it's more of the latter, a measure of the good-natured, sometimes even buoyant, spirit of "Zombieland," which is the feature-film debut of director Ruben Fleischer. (The writers are Rhett Reese and Paul Wernick.) Jesse Eisenberg is the shy young man with the gastrointestinal troubles -- we know him only as Columbus (the city he hails from), because in this terrifying new United States, where most of the population has been turned into clumsy, flesh-chomping creatures whose mouths spew black goo, there's no time or need for real names. At any rate, that's the rule established by Tallahassee (Woody Harrelson), the tough-talkin', gun-totin' Twinkie-lovin' zombie killer whom Columbus meets, and tags along with, early in the film. It's not long before, in their swaggering innocence, Tallahassee and Columbus are duped by two grifter sisters, Wichita and Little Rock (Emma Stone and Abigail Breslin) -- their tactics are smack in the middle between mischievous and hardhearted.

And then, of course, these four rootless individuals become a makeshift family; even though each is on his or her way to a different place, they discover, despite their initial annoyance with one another, that they're happier hanging together than going their separate ways. Plus, it's nice to have company when you're blamming zombies with shotguns and automatic weapons (which our hardy crew, luckily, has an almost inexhaustible supply of).

Because bonhomie is the true subject of "Zombieland." Fleischer has made a movie that comes off as easygoing, but actually shows a remarkable amount of discipline: The picture is beautifully paced, with an exhilarating, comically violent opening, a halcyon middle section where, in what could be viewed as a sideways homage to "Rebel Without a Cause," our rootless wanderers share a brief respite in an empty, lavish mansion (I won't tell you whom it belongs to), and a finale filled with light and color and movement (as well as piles of vanquished zombies). "Zombieland" is wickedly funny in places: In the opening sequence, Columbus outlines, in voice-over, the chief rules for surviving in this dangerous new world. To illustrate one of his maxims, a vehicle driven by a friendly-looking mom type is besieged by a troupe of little zombie girls in pink princess costumes, their mouths dripping with outrageously exaggerated black, bloody goo. It's every parent's nightmare kiddie birthday party.

But the picture has good manners, too: As Columbus tries to fend off a cute-girl zombie, he accidentally jams her foot in a door. "Sorry!" he mutters automatically. Eisenberg is a low-key actor, perhaps a bit too low-key: Although he's given effective performances in pictures like "The Squid and the Whale" and "Adventureland," he's beginning to seem like a performer who knows how to strike only one note. But in "Zombieland," he at least stretches and bends that note, poking fun at his character's nerdy, overly cautious demeanor. Similarly, Harrelson takes devilish glee in sending up his character's machismo ("Time to nut up or shut up" is his favorite expression). His delivery is both relaxed and pocketknife-sharp, but there are also places where he doesn't need to say a word to set us giggling: He has a way of tempering his near-psychotic stare with an easy, "What, me worry?" grin, and the combination is a kind of genius.

Stone, who played a groovy, down-to-earth high-schooler in "Superbad," is even sexier and more sultry here: She has a great, slightly gravelly voice, the voice of a girl who's smoked way too many cigarettes -- and in a world in which few of us are allowed to indulge in the pleasures of tobacco, maybe the sound of smoking is the next best thing. But even if Stone's Wichita is a straight-talking presence, she's not, we learn, such a tough girl after all. And that's fitting in a movie that's as unapologetic about its affection for the zombie-movie genre as "Zombieland" is. Parts of the picture are brushed with a cozy glow, the kind of coziness you sometimes get in science fiction -- John Wyndham's marvelous novel "Day of the Triffids" comes to mind -- when a small crew of hardy survivors is forced to face a harsh world. "Zombieland" is a romance, a comedy, a road movie and a freewheeling schlock horrorfest, all in one. But one thing it doesn't trade in is paranoia: Its growling, groaning zombie villains aren't particularly menacing. This isn't so much an us-against-them parable as an inclusive joyride. Even in the United States of Zombieland, we're all in this together.