A right-wing Web site is working on a new conservative version of the Bible; we offer some suggestions 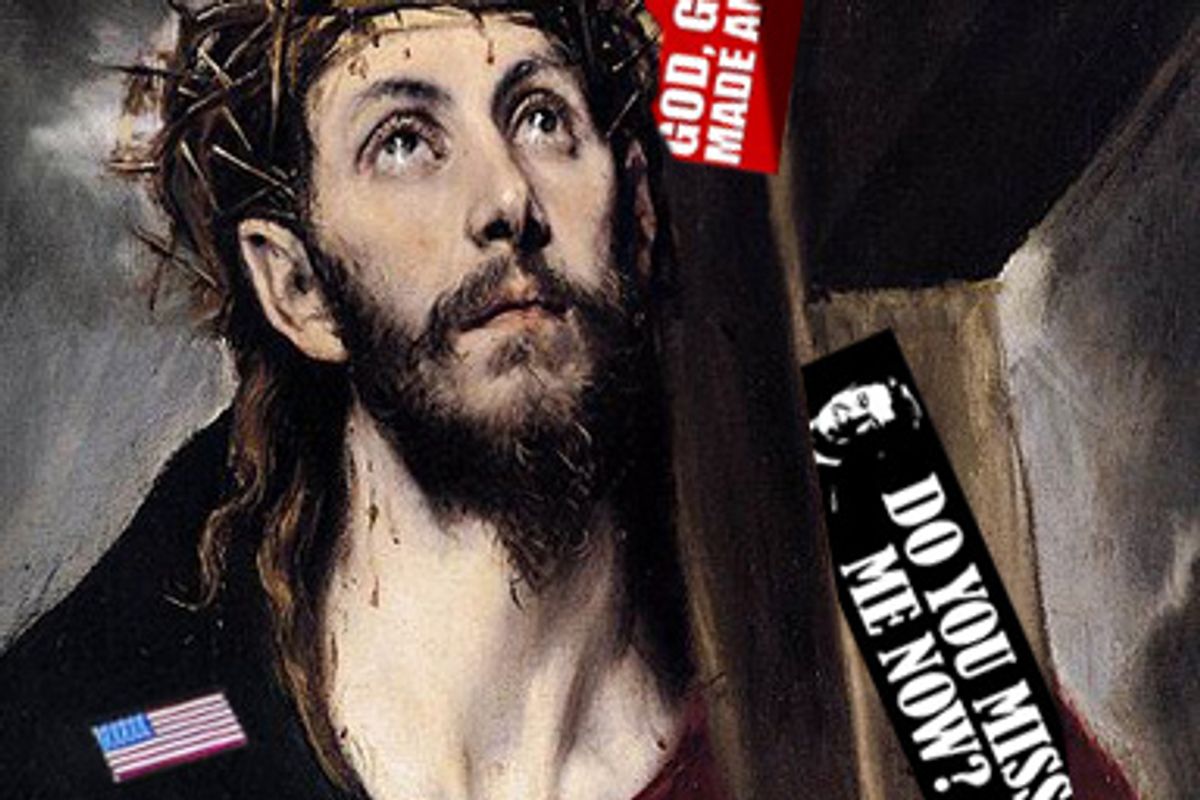 Liberal bias can be found in the unlikeliest of places these days, and it's often the people you'd least suspect who are responsible for it. Who, after all, would suspect England's King James I, who ruled in the 17th century, of leaving the version of the Bible that he commissioned open to subversion by Marxists?

The folks at Conservapedia, that's who. The Web site founded by Phyllis Schlafly's son Andrew as an alternative to Wikipedia, which bills itself as the only "encyclopedic resource on the internet [that] is free of corruption by liberal untruths." It has started what it's calling the "Conservative Bible Project," because, the article on the project explains, "Liberal bias has become the single biggest distortion in modern Bible translations."

Now, you may think this is an absurd idea. But here at Salon, we think it's an important project, and that you're all heathens, or worse, Unitarians. We've decided to pitch in and offer some contributions to the new translation. How could we not? Conservapedia is, after all, scrupulously fair and objective. You can tell from its article on President Obama, which discusses the mind control techniques he used during the presidential campaign, includes a lengthy -- and credulous -- discussion of Birther theories and sums up his political beliefs by saying, "Obama's positions have been described as that of a 'Marxist leftist'. On numerous occasions Obama community organizers have been found flaunting banners of Marxist guerrilla and murderer Che Guevara. Former presidential candidate Alan Keyes calls Obama a 'radical communist.'"

Our contributions are below. But first, a little more on what Conservapedia is looking for in its version of the Bible. The project leaders, a group that includes Schlafly, have come up with a list of 10 basic guidelines, including:

4. Utilize Powerful Conservative Terms: using powerful new conservative terms as they develop;[4] defective translations use the word "comrade" three times as often as "volunteer"; similarly, updating words which have a change in meaning, such as "word", "peace", and "miracle".

6. Accept the Logic of Hell: applying logic with its full force and effect, as in not denying or downplaying the very real existence of Hell or the Devil.

10. Prefer Conciseness over Liberal Wordiness: preferring conciseness to the liberal style of high word-to-substance ratio; avoid compound negatives and unnecessary ambiguities; prefer concise, consistent use of the word "Lord" rather than "Jehovah" or "Yahweh" or "Lord God."

The site also wants to root out what it calls "later-inserted liberal passages that are not authentic," like the story of the woman accused of adultery who's saved by Jesus saying, "If any one of you is without sin, let him be the first to throw a stone at her." And its leaders want to "identify pro-liberal terms used in existing Bible translations, such as 'government', and suggest more accurate substitutes."

They're also concerned that "Socialistic terminology permeates English translations of the Bible, without justification. This improperly encourages the "social justice" movement among Christians," offering as proof of this assertion, "For example, the conservative word "volunteer" is mentioned only once in the ESV, yet the socialistic word "comrade" is used three times, "laborer(s)" is used 13 times, "labored" 15 times, and "fellow" (as in "fellow worker") is used 55 times."

So, without further ado, Salon's contributions to the project, beginning with a version of the adulteress story that we think will fit better, with no concerns about accuracy.

John 8:3-7: The teachers of the law and the Pharisees brought in a woman caught in adultery. They made her stand before the group and said to Jesus, "Teacher, this woman was caught in the act of adultery. In the Law Moses commanded us to stone such women. Now what do you say?"

Jesus bent down and picked up a rock. When they kept on questioning him, he straightened up and said to them, "OK, we start on the count of three. And if I see any of you throwing like limp-wristed sissies, you're next."

On hearing this, Jesus said, "Tax collectors? I had no idea, and wouldn't have eaten with them if I had known, for I favor a flat tax."

Matthew 5:3-5: Blessed are the GOP, for theirs is the kingdom of Heaven.

Blessed are those who mourn the death of Christmas, for they will be comforted.

Blessed are the children of the rich, for -- once Congress finally eliminates the Death Tax -- they will inherit the earth.

Matthew 5:17: Do not think that I have come to abolish the Law or the Prophets; I have come to force trial lawyers to stop filing trivial lawsuits every time someone gets hurt and won't take responsibility for themselves.

Luke 22:17-25: After taking the cup, he gave thanks and said, "Take this and divide it among you. For I tell you I will not drink again of the fruit of the vine until the kingdom of God comes."

And he took bread, gave thanks and broke it, and gave it to them, saying, "This is my body given for you; do this in remembrance of me."

In the same way, after the supper he took the cup, saying, "This cup is the new covenant in my blood, which is poured out for you. But the hand of him who is going to betray me is with mine on the table. The Son of Man will go as it has been decreed. But woe to that man who betrays him!" They began to question among themselves which of them it might be who would do this.

A dispute also arose among them as to which of them was considered to be greatest. Jesus said to them, "Reagan. Definitely Reagan."