Is the tide turning for the public option?

As healthcare reform moves to backroom talks, supporters say its chances may be improving 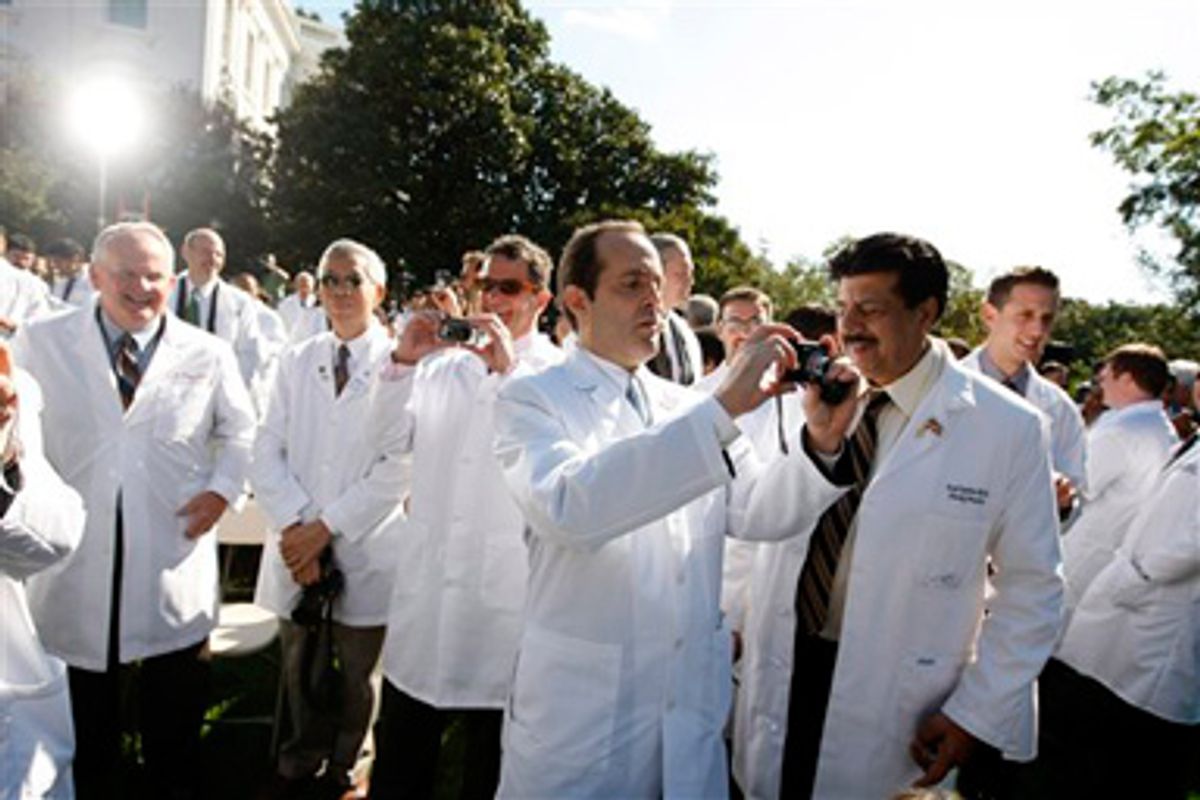 None of the various healthcare reform bills kicking around Congress would order doctors to make house calls. But the White House decided that was exactly the treatment the administration's top domestic priority needed to maintain some legislative momentum. And so about 150 physicians showed up on the Rose Garden lawn Monday morning for a pep rally -- with at least one coming from every state, naturally, the better to gin up local media coverage of the event back home.

"The reason these doctors are here is because they have seen firsthand what's broken about our healthcare system," President Obama said, surrounded by a surgeon, an OB-GYN, an allergist and an oncologist. "Every one of you here today took an oath when you entered the medical profession. It was not an oath that you would spend a lot of time on the phone with insurance companies. It was not an oath that you would have to turn away patients who you know could use your help. You did not devote your lives to be bean counters or paper pushers. You took an oath so that you could heal people."

The stirring rhetoric wasn't the only point of the rally, though, and the target audience wasn't only the people watching or reading about Obama's remarks. A close look at the physicians standing on the stage with the president showed some of the backstage maneuvering involved. Those doctors weren't just chosen for their looks. The surgeon on the podium with him? He came from Maine. The OB-GYN was from Nebraska, the allergist from Florida and the oncologist from Arkansas. Not coincidentally, all four states are home to senators whose votes the White House will need when healthcare reform hits the floor in the next few weeks.

As Democratic leaders in Congress and the White House try to move healthcare legislation along, the battle over the legislation is entering an increasingly arcane realm of backroom negotiations and procedural votes. The lawmakers from those states who are being courted -- Republican Olympia Snowe of Maine and Democrats Ben Nelson of Nebraska, Bill Nelson of Florida and Blanche Lincoln of Arkansas -- are likely to hear all about how their doctor constituents joined Obama to push for reform. Public events and private talks alike are being planned with one goal in mind: to find a Senate coalition of at least 60 votes to get the legislation past any GOP attempts to filibuster it.

That isn't necessarily bad news for progressives hoping to ensure the bill includes a strong government-run public option as part of a proposed insurance exchange system for people whose employers don't cover them, though. Congressional aides and outside activists say the White House is still pushing for the public option in private talks. A growing number of Democrats in the Senate say they think the bill will include some form of public option, including Majority Leader Harry Reid and health committee chairman Tom Harkin. "President Obama has said all along that the public health insurance option is his first choice" for making health insurance affordable, said Jacki Schechner, a spokeswoman for Health Care for America Now, a union-backed coalition that supports reform. "We want to make sure he gets his first choice."

The version of the bill that the Senate Finance Committee is working on doesn't include a public option. But supporters think they may be able to preserve it, nonetheless. Finance will vote on its bill later this week -- probably Thursday -- after the nonpartisan Congressional Budget Office calculates how much it will cost. (When that work might be finished isn't clear; a CBO official told me it would be done "when it's done," and insisted on anonymity to pass along such an informative piece of news.) The committee is likely to pass the bill, mostly written by Montana Democrat Max Baucus, and that will set off more private talks between top Senate Democrats and members of the Finance panel and the more liberal health committee, which has already passed its own version of the bill.

The public option, though, isn't the only detail left for Democrats and the White House to figure out. Progressive activists and lawmakers alike think the Finance version of the bill doesn't do enough to make health insurance affordable. Snowe -- the only Republican who's indicated she's even willing to consider voting for the bill -- wants the federal government to help states like Maine, which provide Medicaid services for people with incomes higher than the national cutoff, pay for the care.

Eventually, aides in Congress say, the White House will probably have to start making more decisions about what is and isn't in the legislation. By the weekend, lawmakers -- not staff -- will be hashing out the details of how to combine the two Senate bills. "If the White House presence is at a five out of 10 right now, or a six out of 10, it needs to go up to an eight or a nine," one senior Democratic aide said. That might include a decision on the public option. "They're exactly where we are," the aide said of the White House. "We want to put it in, but where ... are the votes coming from?"

The administration may not want to say exactly what form of public option Obama would or wouldn't be willing to accept; press secretary Robert Gibbs told reporters Monday that aides were "still working to make sure that we have choice and competition in this legislation," but he wouldn't go into any details. But as the White House house call -- and the careful stage managing -- Monday morning showed, aides are looking for votes wherever they can find them.