The supposed "costs" of leaving Afghanistan are endlessly highlighted, but the costs from staying are ignored.

The White House said Monday that President Barack Obama is not considering a strategy for Afghanistan that would withdraw U.S. troops from the eroding war there.

Apparently, "all options" does not mean "all options."  As usual for American wars, examining "all options" means everything other than "ending the war."  That's what accounts for this: 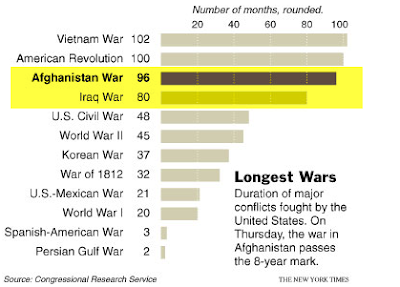 If one were to add the various military actions from the last several decades that aren't on this list -- our constant covert wars in Central America of the 1980s; our involvement in the Balkans; our invasions of Somalia, Haiti, Grenada, and Panama, etc. etc. -- that is as pure a picture of a perpetual war state as one can imagine.

Despite that, Obama yesterday met with 30 members of Congress from both parties to discuss the various possibilities for Afghanistan and, according to The New York Times, "some Democrats said they would support whatever he decided."  In particular:

"The one thing that I thought was interesting was that everyone, Democrats and Republicans, said whatever decision you make, we’ll support it basically," said Senator Harry Reid, the majority leader.

That's not how things are supposed to work.   There's not really any point in having a Congress if its members are simply going to tell the President:  "whatever decision you make, we’ll support it basically."  That was the same mentality that led House Democrats -- reluctantly, they claimed -- to vote for the war supplemental bill three months ago, appropriating another $106 billion for the wars in Iraq and Afghanistan:

In the end, 19 House Democrats backed the bill who had opposed it the first time, although some cited loyalty, not agreement with Obama's plans, as their reason.

"I want to support my president," said Rep. Jan Schakowsky (D-Ill.), who changed her no vote to a yes.

The Times article does note that some Democrats -- House Speaker Nancy Pelosi and Sen. Carl Levin -- expressed strong resistance to any escalation in Afghanistan.  But the option which large numbers of Americans support -- withdrawal within a year and, especially, within two years -- is not even part of the debate.  It's not even an option that is being examined by the White House's supposedly "comprehensive" review.  As a result, the discussion is almost exclusively about tactics (how many troops?; what should they be doing?; how much can we rely on air power?) and almost none about the still-towering mystery of what we're likely to achieve by continuing to occupy that country.

What makes that fact most remarkable is that we're less than a year away from what was alleged to be an extremely close call with full-scale financial collapse.  All Serious people are required to proclaim the exploding national debt to be a potentially cataclysmic threat.  Here's the uber-Serious Tom Friedman today:

The same is true with America’s debt bomb.  To recover from the Great Recession, we’ve had to go even deeper into debt. One need only look at today’s record-setting price of gold, in a period of deflation, to know that a lot of people are worried that our next dollar of debt -- unbalanced by spending cuts or new tax revenues -- will trigger a nonlinear move out of the dollar and torpedo the U.S. currency.

Yet the staggering cost of our ongoing occupations is being funded exactly that way:  "unbalanced by spending cuts or new tax revenues."  In these two posts -- here and here -- Howie Klein details how Congressional Democrats are now working to ensure that funding for these wars will be exempt from "pay-go" budgetary requirements.  Their inclusion at least required that Congress, in order to continue to fund these wars, would either have to raise taxes or cut spending elsewhere to pay for these wars.

By contrast, exempting war funding from this process would essentially enable Congressional Democrats to fund these wars through a process tantamount to the deceitful Bushian magic trick of appropriating money as part of the "supplemental budget" -- meaning, as Klein put it:  "he just printed up hundreds of billions of dollars for all his misadventures without having to raise taxes or cut programs, in effect driving the country towards virtual bankruptcy and leaving the economy in a complete shambles."  That was a process which Obama repeatedly condemned, yet Congress is conspiring to essentially replicate it.  That, in turn, is all designed to enable the bizarre dynamic where the economic burden of continuing these wars is simply excluded from all discussions.

The great fallacy at the heart of discussions of Afghanistan is this:  if one can plausibly argue that a war was originally justified, then that proves that the war should continue even eight years later (there's no need for us to leave because the Taliban let Al Qaeda use that country to attack us in 2001 and therefore it's self-defense).  Often, the discussion, for many war supporters, rarely progresses beyond that point.  But whether a war is "justified" is a completely separate question from whether it's "wise."  Just as was true for Iraq, the supposed "costs" of leaving Afghanistan are endlessly highlighted (the Taliban will return, Al Qaeda will come back, it'll be a brutal and lawless state), while the costs to the U.S. from staying -- and from continuing to be a nation in a state of perpetual war and occupation -- are virtually ignored.

UPDATE:  I have one other question:  remember all those "chickenhawk" arguments made about supporters of the Iraq War -- how come they're not fighting themselves?; are they sending their kids to fight?; why aren't the pro-war, fighting-age pundits enlisting?, etc.  Now that the General in command of Afghanistan insists that roughly 40,000 more troops are needed for the mission, and the number of fatalities is increasing substantially, do those same "chickenhawk" arguments apply to supporters of the war in Afghanistan?  If not, how come?

UPDATE II:  Regarding the primary rationale for escalating (or even remaining) in Afghanistan -- namely, that if the Taliban control Afghanistan, Al Qaeda will return and once again have a "safe haven" there -- DDay asks an excellent question:  since the Taliban already control a huge portion of Afghanistan and have for a couple of years (up to 80%, in fact), why hasn't Al Qaeda returned?  He argues that "this persistent lie about Al Qaeda's aims in the region underpins the entire case for escalation, just the way the domino theory underpinned consistent troop buildup in Vietnam," and makes an excellent argument in support of that view which is well worth reading (h/t rrheard).