Gourmet was for the young and scrappy, too

Media coverage has tarred Ruth Reichl's magazine as elite and stuffy. But it was so much richer than that 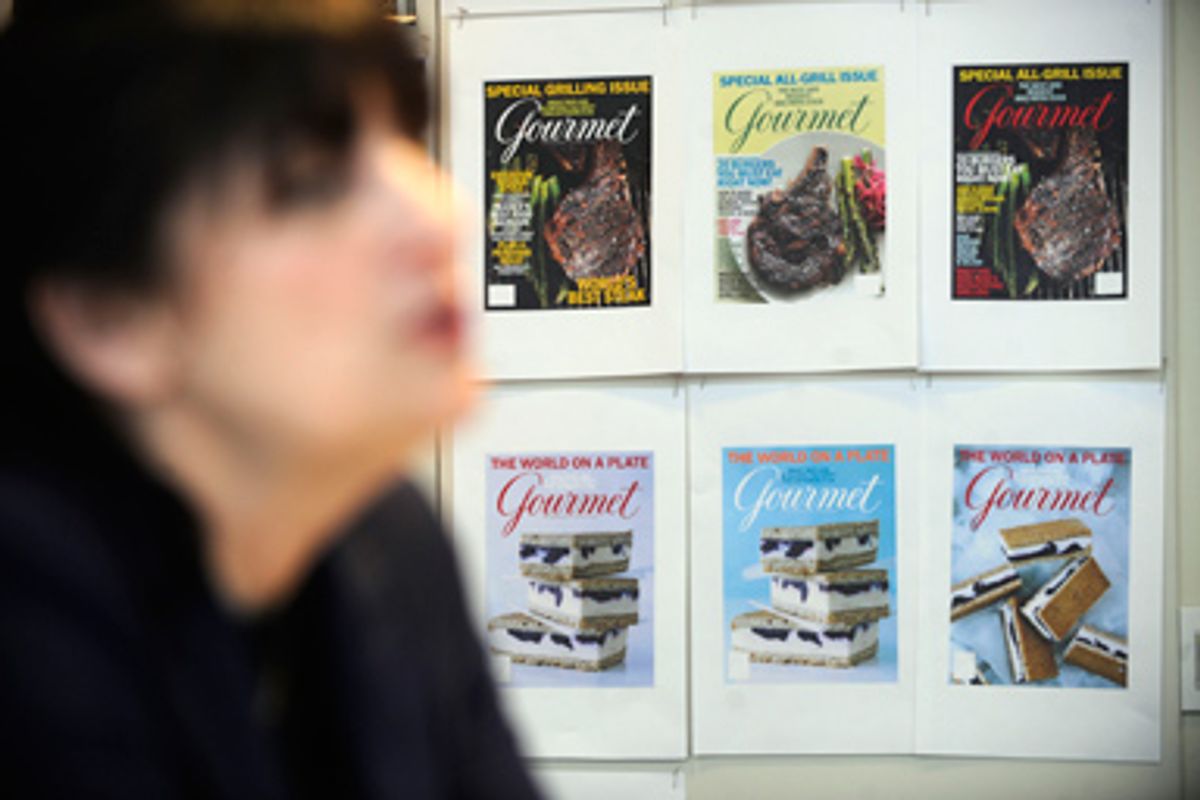 The Magazine of Good Living closed this week after a 68-year run, leaving behind a rather chichi reputation. Its pages shimmer with luxe ads for Cartier watches, champagne and the occasional feature on a palatial hotel or “where our critics would dine with $1,000.” The magazine is being condemned in some quarters as irrelevant in the current economy, a victim of its own food snobbery -- its long features and sometimes-difficult recipes out of touch with a “yummo” world dominated by 10-minute meals and Rachael Ray. In today’s New York Times, Kim Severson writes that Condé Nast's decision to keep the recipe-packed, ad-rich sibling Bon Appetit alive while shuttering Gourmet was a "gut punch" for the "food elite -- especially of an older generation."  Former Julia Child editor Judith Jones sniffed, “Gourmet got away from the things that are going on in people’s homes, and seemed to be for an elite that got smaller and smaller.”

The food elite of an older generation? Hey, man. That’s code for “the old and the rich.” But for those of us in the creative underclass -- freelance writers, food obsessives, many of us perpetually broke -- within those shiny pages lurked a punk-rock ethos and youthful yen the naysayers should take into account. Dammit, Gourmet was for the young and the scrappy, too.

Outgoing editor Ruth Reichl is bristling at intimations of elitism, and rightly so. After all, before this decade’s stint running Gourmet she was the woman known for wearing disguises as a critic for the New York Times. She publicly dressed down swanky Le Cirque after being treated like a pauper while incognito. In her memoir "Garlic and Sapphires" she recounts how readers (and many in the highbrow food world) howled for her head when she began to review -- gasp -- sushi restaurants and noodle shops instead of French or Italian restaurants. “Elite” has got to sting.

As a lifelong reader (and, full disclosure, Web site contributor) of Gourmet I would suggest that Ruth Reichl was not a snob, but -- at her best -- an egalitarian badass. She is a lover of food in all its sensuous, unruly glory. She put haute French chefs like Daniel Boulud in line for a food cart on the street. She ran features about politics and poverty -- the life of a tomato laborer, a brilliant Chinese cook serving $7 entrées in Toronto, the travails of a restaurant parking valet. She asked novelist Junot Diaz to wax poetic about the authentic Dominican food of Northern Manhattan, and the result was so fantastic it sent readers from all corners of Gotham scurrying onto the 2/3 train to eat crunchy arroz con gandules (rice and pigeon peas).

And do we need to consider the lobster, that massive, meandering meditation on human -- and creature -- nature by David Foster Wallace? I think we do.  As a fellow 30-something food writer said with a sigh, “Gourmet just sort of got it the way that other magazines just don’t. Food’s not meant to be so rarefied and only for people who want pretty things. It’s a very sort of wild thing to cover.”

I had this sense of euphoria when I basically cold-pitched Reichl a story about trailing a renegade chef for 33 miles on foot through Los Angeles to make a gourmet meal beneath a freeway. Her response was swift and emphatic -- an editor’s equivalent to a “hell, yes.”

Robert Sietsema, the Village Voice reviewer known for eating anything from brains to guts (and doing so on the cheap), was hired by Reichl to add “edge cred” to Gourmet in 2000. Perhaps the ultimate “scrappy” food reviewer, he remains a staunch defender of the magazine. As he told me, “Gourmet represents a food culture that’s evolved over decades, that had its roots in the foodism of James Beard and Julia Child and M.F.K. Fisher -- people who were original thinkers of food, who staked out that territory decades before millions of food writers were swarming over the landscape like carpenter ants.”

One of Sietsema's first assigned features was on African restaurants, which weren't popular in America in 2005 and aren’t now: “No one, even today, would do that piece.”

A New York Times business writer proclaimed on Monday that Gourmet was “a beautifully produced magazine that lived, and sold, the high life.”  Sure, in part. Interspersed with pieces on road food and taco trucks were upscale travel pieces and, recently, the notorious “Restaurants Worth the Money” feature for which Reichl -- who said she’d eat a $700 tasting meal at Per Se if money was no object -- is catching flak among food writers and on message boards. (Ironically, Reichl also received criticism for not being luxe enough. After the magazine fell, one commenter on industry site Eater sniped, “I think [the magazine] deteriorated from a genteel -- and yes, moneyed -- celebration.")

But lest we forget, this is also a woman who dressed in full KISS regalia at the Four Seasons in order to protect her baby and drive traffic to Gourmet.com.  It was funny and sad at once, and it did not go unremarked upon. And while the magazine may not exactly be a Publication for the People -- a boozy cry of “Gourmet closed today!” elicited only silence and stares at my local watering hole -- the magazine did represent a seductive view of food for everyone that was part aspirational, part inspirational.

“Some day, I’ll stay at that B&B,” one might think while turning its pages. “I’ll eat that steak.”

It’s the covers that really got me, even as a kid. The rack of lamb. An apple drowning in caramel. Profiteroles drizzled with chocolate by an unseen hand. Simple and magical like a picture book, the lush graphics transfixed even this fussy eater of a child: “I may not know what that is, but I would like to eat it.”

One Pakistani friend remembers poring over the magazine with cousins, all of them agog at such a glamorous introduction to American cuisine. He eventually went to culinary school and has never thrown out a copy -- even the battered ones he’s picked up in gas stations or on the subway. Another friend, a college dropout, credits Gourmet with supplementing his education when he worked as the chef of a Long Island clam bar at the tender age of 22. It kept him his job.

There is a split in the so-called foodie community between those who consider themselves entitled to the good life and those who are just so abuzz with glee about being in a restaurant or eating something delicious they can hardly stand it. It’s my opinion that -- despite its visions of opulence -- Gourmet appealed to the latter instinct in us, and that it’s the better one. Its pages shone with an empathy for purveyors of the food and the chefs they featured. In an online followup to his piece on a Toronto Chinese restaurant, my friend Francis Lam interviews the cook’s son, who says, “Will you write about how hard people work in this business? So that customers driving up in Mercedeses will stop thinking they can treat people like crap just because they’ll spend $2 on a chicken leg?” Gourmet never just let the glossy rhetoric come screeching to a halt at, “Artisanal stuff is awesome!!”

In college, I was frozen one day among the library stacks by a line in Wallace Stevens’ poem “Sunday Morning”: “Coffee and oranges in a sunny chair,” he wrote. The words sparked a desire: “I want that.” My roommate and I started having our morning coffee, French-pressed, on the roof in the sun before going to class. It was a tiny, simple luxury.

Years later, as a staff research editor at Martha Stewart Living, I felt the same way interviewing the test kitchen cooks. We’d stop working and compare notes about our favorite cubano in town, or the best huarache. It was the year I realized I wanted to be a food writer.

There’s no price tag on that feeling, that freezing of time to make room for pure appetite. And with its glimmering covers and gorgeous, winding stories, Gourmet made that sentiment accessible to everyone. There’s no elitism in that.

Alex Van Buren, a Brooklyn-based journalist and editor, has written for Gourmet, In Style, Martha Stewart Living, Time Out New York, Slashfood and New York Magazine, among other publications. The co-author of "Clean Plates N.Y.C.," she is currently working on her own food and travel book.