Dazzling direction, Oscar-worthy performances and strong narratives -- the Brits are doing what the Yanks can't 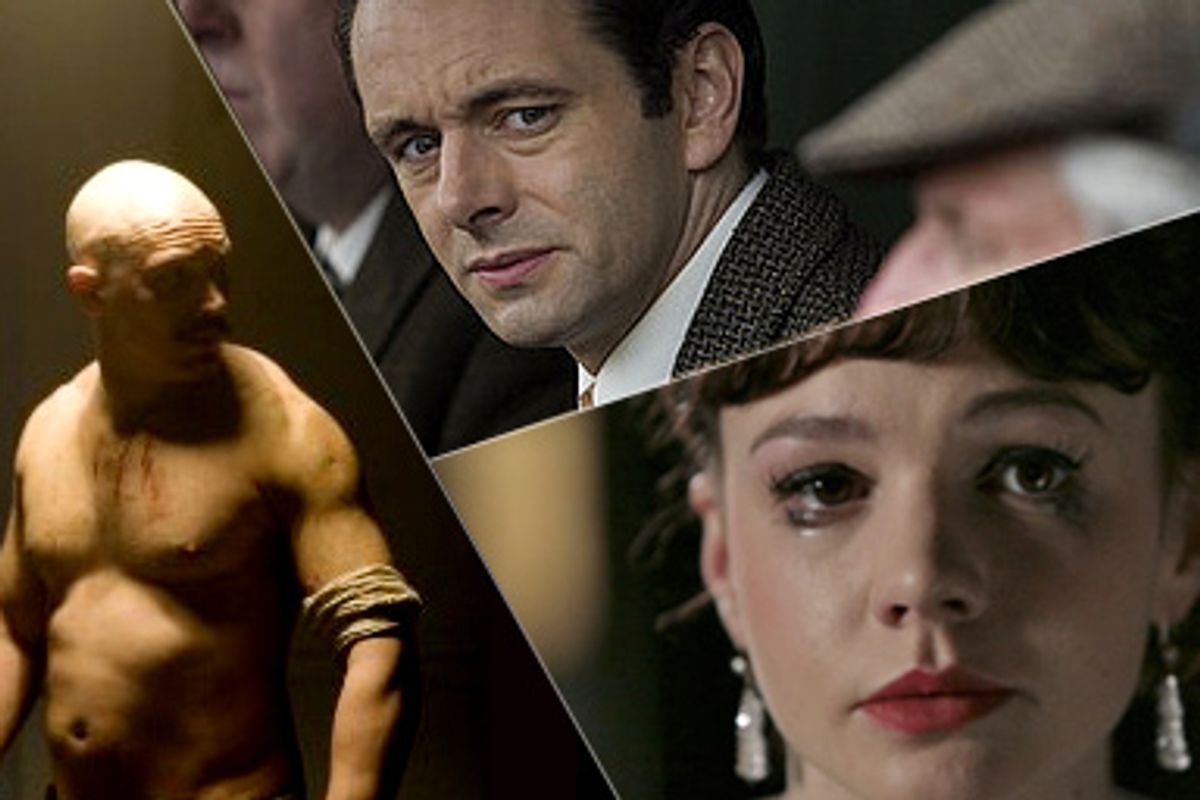 Stills from "Bronson", "Damned United" and "An Education"
-- From left, Tom Hardy in "Bronson," Michael Sheen in "The Damned United" and Carey Mulligan in "An Education"

Is it pure coincidence that three of the fall season's best movies are opening right on top of each other -- and that all three are products of Britain's suddenly resurgent indie-film industry? I'm voting both yes and no. It's coincidence in the sense that the film-release calendar seems to operate according to laws that aren't just random but positively irrational: It verges on marketplace suicide to open these three movies at the same time, but here they are. What's not coincidence is that the film biz in post-imperial, post-Tony Blair Britain is riding a hot streak, cranking out splashy, stylish, audience-friendly flicks that bear no resemblance to the fusty, fussy, Jane Austen-in-lingerie stereotypes of yore.

It's tempting to point to the multiple Oscar winner "Slumdog Millionaire" -- a film about which I have very mixed feelings -- as a turning point in British cinema history, but the real story is a lot more complicated than that. No doubt Danny Boyle's Digicam odyssey through the streets of Mumbai is a terrific example of how 21st-century British film has become globalized, both in terms of subject matter and audience appeal. Taken together, the three new movies reaching the American colonies this week -- "An Education," a study of teen girlhood in pre-swinging London; "Bronson," the operatic, quasi-true story of "Britain's most violent prisoner"; and "The Damned United," about the legendary flameout of a '70s celebrity soccer coach -- seem to recall, almost deliberately, the glory days of British cinema.

Although the three films are sharply dissimilar, at least in broad strokes, all are built around memorable star performances, and all depict postwar Britain in a sardonic light, showing off various phases of its social decay. In two cases, the filmmakers aren't themselves British -- but that too is nothing new. "An Education," a highly-touted Oscar contender with a captivating star turn from Carey Mulligan and a script by hipster icon Nick Hornby, has a Danish director (Lone Scherfig) and an American co-star (that would be Peter Sarsgaard, wonderfully unctuous as the disreputable older-guy love interest). Based on Lynn Barber's memoir, "An Education" captures the very limited possibilities for female liberation in early-'60s London -- with massive social change on the distant horizon, but not here yet -- in exquisite detail.

"Bronson" is an explosive, theatrical, fourth-wall-busting project that will strike some viewers (like me) as prodigious and others as unbearably pretentious. It's got another Dane, cult hero Nicolas Winding Refn, at the helm, spinning his camera willy-nilly around the thundering, drooling, 'roided-up performance of Tom Hardy as the ultraviolent British convict who borrowed his monicker from the '70s action star. No Danes are implicated in the making of "The Damned United," an almost perversely provincial film that may not find a wide audience outside English émigrés and hardcore soccer fans. But it too has a delirious lead performance from Michael Sheen (Tony Blair in "The Queen"), and offers a wacky, compelling, magical mystery tour of English sports culture, circa 1974. If you simply start watching it without prejudice you'll have a ridiculously good time.

Well before the 1970s explosion of rebellious American cinema that brought Francis Coppola, Martin Scorsese and Steven Spielberg to worldwide fame, London was the center of its own low-budget film renaissance, one that saw American expatriates like Stanley Kubrick and Joseph Losey working alongside young British upstarts like Lindsay Anderson, Ken Loach, Mike Leigh and Alan Clarke. (A certain Polish-French director who's been in the news lately also worked in England in the '60s.)

That moment isn't widely remembered today, for a bunch of different reasons, and in the intervening years British acting and directing talent has overwhelmingly flowed toward Hollywood. Given the tepid, depressive state of American independent film right now, though, and the clear sense that things are sprouting up across the Atlantic like wildflowers after an English rainstorm, I'm betting it won't be long before we see ambitious Yanks emulating Kubrick and Losey's example. Urgently paging Andrew Bujalski, Antonio Campos and Azazel Jacobs: Go east, young men!

I'm not claiming that no good movies are being made in the United States; far from it. But the film industry and its marketplace seem segmented in a way that isn't helping artists or audiences. There are a handful of brand-name Indiewood directors who can pretty much write their own ticket: Tarantino, the Coen brothers, the unrelated Andersons (Wes and P.T.). Below that we see a lot of clever, minor tweakage applied to familiar formulas: "(500) Days of Summer" or "Jennifer's Body." Lower still in the ecosystem, lo-fi, achingly sincere movies get made by the dozen. (Instead of supplying names and links, let's just stipulate that that's most of the films I've written about over the last five years or so.) They travel the festival circuit for a few months, and the better ones get released in theaters or via VOD, before being universally rejected by the media-saturated public's collective immune system.

When exciting young directors like Bujalski, Campos or Jacobs emerge, out there on the underfed indie fringes, there seems to be no way to break out of the tiny club of aficionados who attend Sundance or South by Southwest and bring their work to a smart, film-literate general audience. Maybe those filmmakers and others have self-marginalized to some degree, making highly personal, idiosyncratic works and accepting that in a downsizing economy their future lies in self-distribution, social networking, digital downloads and so on.

But look across the ocean and behold: "An Education" is both cleverly packaged and wonderfully executed; it will get terrific reviews, do decent big-city business and plausibly garner at least a best-actress nomination for the irresistible Mulligan and a supporting actor nod for Alfred Molina (who plays the wanton teen's suburban dad). Lone Scherfig, its director, is a 50-year-old Danish woman whose only international success came with "Italian for Beginners" in 2000. A year ago, the only way Scherfig could have found work in Hollywood was as a high-priced Euronanny (or maybe an upscale Scando-dominatrix); this winter, I garr-yan-tee that Harvey Weinstein leaps from the pool and scurries to the phone when she's on the line. (Stephanie Zacharek will provide a full review of "An Education" on Friday.)

I'm dubious that Americans will cotton to "Bronson" in large numbers; it isn't about the other, better-known Charles Bronson, and he isn't in it (having been dead for six years). But it provides a glorious showcase for the amped-up talents of both star Hardy and director Winding Refn, who in another era would have ridden his grueling, violent, dark-side-of-Copenhagen "Pusher" trilogy straight to Hollywood. In its portrayal of the charismatic, sociopathic skinhead hero (né Michael Peterson), and its delirious soundtrack blending Puccini and Wagner with the Pet Shop Boys, "Bronson" owes a little or a lot to Kubrick's "Clockwork Orange," but if that's a crime I wish more people would commit it.

As portrayed by Hardy, Bronson is a sort of body artist from downscale suburbia, a man with a certain anarchistic tenderness in his soul -- he loves his mother, and various skanky prostitutes, and possibly a fellow prisoner or two -- who finds his true calling in administering (and receiving) vicious beatdowns. He interrupts the action to address the audience (both the movie's audience and a digitized audience in a theater), sing "Please Release Me," perform other characters' roles in partial drag and deliver second-rate philosophical bromides.

Some British viewers have complained that Winding Refn and co-writer Brock Norman Brock underplay the real-life prisoner's calculated viciousness, and it's perfectly true that "Bronson" is a hallucinatory dark comedy about a half-animal innocent, trapped in the Kafkaesque world of 1970s British society. Personally, I'm not worried about that, mostly because I never felt this movie was remotely meant to depict reality; it's a rich, hilarious drug overdose dense with color and sound, blood and bad carpeting, and as one supporting character puts it, "ladies, gentlemen and gentlemen in ladies' attire."

As over-the-top self-assured idiots go, Hardy's portrayal of Bronson gets stiff competition from Michael Sheen as English footballing (i.e., soccer) legend Brian Clough, a former star turned pretty-boy coach who spent 44 disastrous days at the helm of Leeds United in 1974, when it was England's most loved and hated team. (Further coincidence: That's also the year Peterson/Bronson first went to prison.) If you're old enough and/or Anglocentric enough to remember those dire, violent years of British football, when it had already become pop culture but was a long way from the global merchandising empire of today's English Premier League, then director Tom Hooper's "The Damned United" will be totally addictive, from its period-newsreel and period-animation opening sequence.

Can viewers who don't know or care much about sports or soccer history be convinced to see "The Damned United"? I have no idea, but those who give it a whirl will discover a delightfully comic and sympathetic portrayal of British life in the hardscrabble, ciggies-and-lager '70s, fueled by Sheen's portrayal of the mouthy, cocksure Clough, who modeled his arrogant public persona after Muhammad Ali. Clough's Leeds debacle was the denouement of his long-running feud with former Leeds coach Don Revie (wonderfully played by Colm Meaney), a gruff father figure who had led the team to repeated glory -- and to a nationwide reputation as thugs and cheaters.

By the time Clough took over at Leeds, full of rhetoric about transforming the team from widely loathed champions into universally beloved champions, he had driven away his lumpish right-hand man Peter Taylor (Timothy Spall, one of those British character actors who's great in everything). As Taylor himself observes, Clough may be the "shop window," but he's the "goods in the back"; while Clough enchanted fans and played the media, Taylor actually worked out such on-the-field matters as players, tactics and strategy. It's a classic and even charming yarn of vanity, hubris and redemption, played out against the bizarre, intense alternate universe of '70s English soccer.

I guess you could remake "The Damned United" so that it was about college football in Texas, and somebody will probably try. I can foresee a few problems: 1) It will no longer be a more-or-less true story, passed down among generations of fans; 2) it will be made in a country that views its own cultural traditions through a massive scrim of sentimentality, instead of with a bemused mixture of love and horror; and 3) it will just totally suck in so many different ways I can't count them.