Is blackface the new black?

A controversy over minstrelsy reveals its shockingly durable appeal 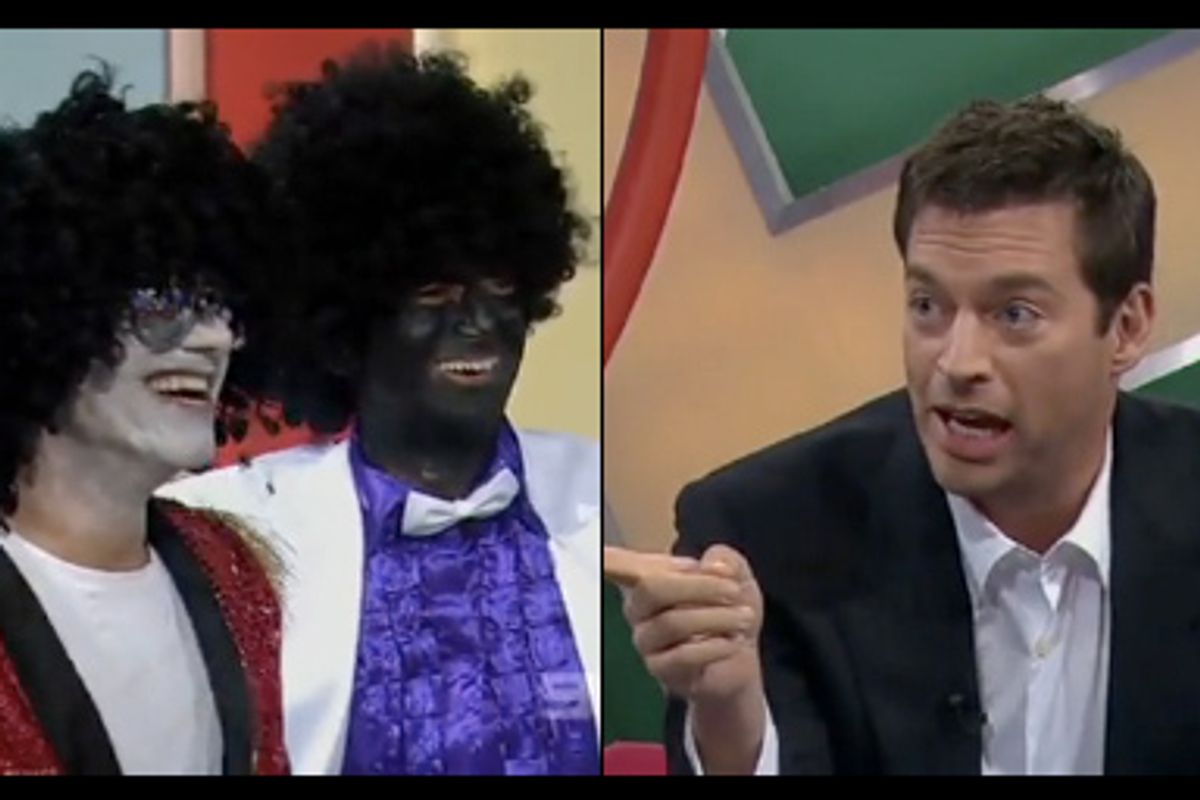 Earlier this season on “Mad Men,” Roger Sterling decked his face in shoe polish and sang about “the darkies” to an amused crowd at a garden party. It was startling and uncomfortable in classic “Mad Men” fashion, an illustration of how far we’ve come since those less enlightened days of the early '60s.

This week, on the Australian variety show “Hey, Hey, It’s Saturday,” a group calling itself the Jackson Jive appeared in a “tribute to Michael Jackson.” Out strutted five men in Afro wigs and blackface, shimmying like jumping beans to “Can You Feel It?” Then came the punch line – another member of the entourage stormed the stage in a red sequined jacket, sunglasses and heavy white makeup. There was also a flash of a big-lipped cartoon character with the caption, “Where’s Kahahl?” a reference to the venerable Australian entertainer of Sri Lankan heritage.

While the rest of the world was left to ponder if the word “tribute” means something different in the Australian language, one of the guest judges pulled the plug, giving the act a decisive, angry gong. The audience booed.

Another judge, Harry Connick Jr., then spoke up. After giving the act a resounding score of zero, he eventually said, “We’ve spent so much time trying to not make black people look like buffoons, that when we see that we take it to heart ... If I knew that was going to be part of the show, I wouldn’t have done it.”

But could the act truly have been a well-meaning tribute? Do we just need a little context? The Jackson Jive appeared on an earlier incarnation of “Hey Hey,” when they were college students 20 years ago -- and won. Oh, right, the late '80s, when minstrelsy was all the rage.

The reaction to the “Jackson Jive” has been mixed. While the host of the show promptly apologized for the act, many in Australia have wondered what all the fuss was. Online posters have called Harry Connick Jr. “just another uptight American with no sense of humor.” And Connick himself appeared on "Mad TV" in 1996 as a bouffanted, suspiciously tan Southern preacher, prompting accusations of hypocrisy.

In a poll on PerthNow.com.au, 81 percent of respondents said the sketch was not racist, with other newspapers clocking in with similar percentages. Punch deputy editor Tory Maguire glumly asserted that “The 2.5 million Australians who were watching were looking for nostalgia, so a returning act like the Jackson Jive was always going to appeal to them.” It's a sentiment echoed by the show's host, Daryl Somers, who told reporters that Australian audiences "see the lightness of it."

Dr. Anand Deva, who appeared as Michael in the sketch, told an Australian radio station this week, “This was really not intended ... [to be] anything to do with racism at all. I am an Indian, and five of the six of us are from multicultural backgrounds and to be called a racist ... I don't think I have ever been called that ever in my life before.'' While the crux of Deva’s argument – that someone who isn’t white can’t be racist -- may strike many as astonishingly naive, the dust-up does raise interesting questions about what’s offensive -- and to whom.

Minstrelsy, while a relic of the past in America, remains an undeniable, integral part of our musical history. Connick is from New Orleans, where Mardi Gras annually kicks off with a Zulu parade of marchers in blackface and grass skirts -- marchers who are themselves African-American. And along with “Mad Men,” blackface has cropped up in other ostensibly humorous pop culture contexts lately. On “Weeds” uppity Celia Hodes spent an episode pursued by a black cop straight out of “Starsky and Hutch” who turned out to be her ex-husband Dean in disguise. And last year, Robert Downey Jr. struck the first blow for bringing blackface back with his brilliant turn as a misguided method actor in "Tropic Thunder." And as for the Jackson Jive themselves, it’s certainly fair to say that Michael and his brothers were famous enough to earn a little good-natured ribbing.

On his Web site this morning, Connick, ever the gracious Southern gentleman, posted that, “I have absolutely no problem with comedic sendups or making fun of myself or others … Where I come from, blackface is a very specific and very derogatory thing,” adding, “I do not believe that the performers intended any harm.”

Perhaps, like Roger Sterling, the Jackson Jive and the viewers in the audience and at home didn’t realize why exaggerated mop tops and coal faces might be considered appalling. Perhaps the blog commentators who think this is just a case of oversensitive political correctness or the Daily Telegraph columnist who lamented “Can't We Just Have a Laugh Any More?” don’t have the most evolved sense of humor. Perhaps this can be what is popularly known as a teachable moment. So here it is: What should be obvious to anyone who isn’t a complete moron is that a little something called the entire history of Western civilization -- what with the slavery and the colonization and the genocide -- disqualifies us from mocking people for their color as grounds for entertainment. It’s just that simple. Or, in the words of the song the Jackson Jive were performing Saturday night, “The blood inside of me is inside of you.” Can you feel it?