Gay issues, the "fringe left" and the liberal veal pen 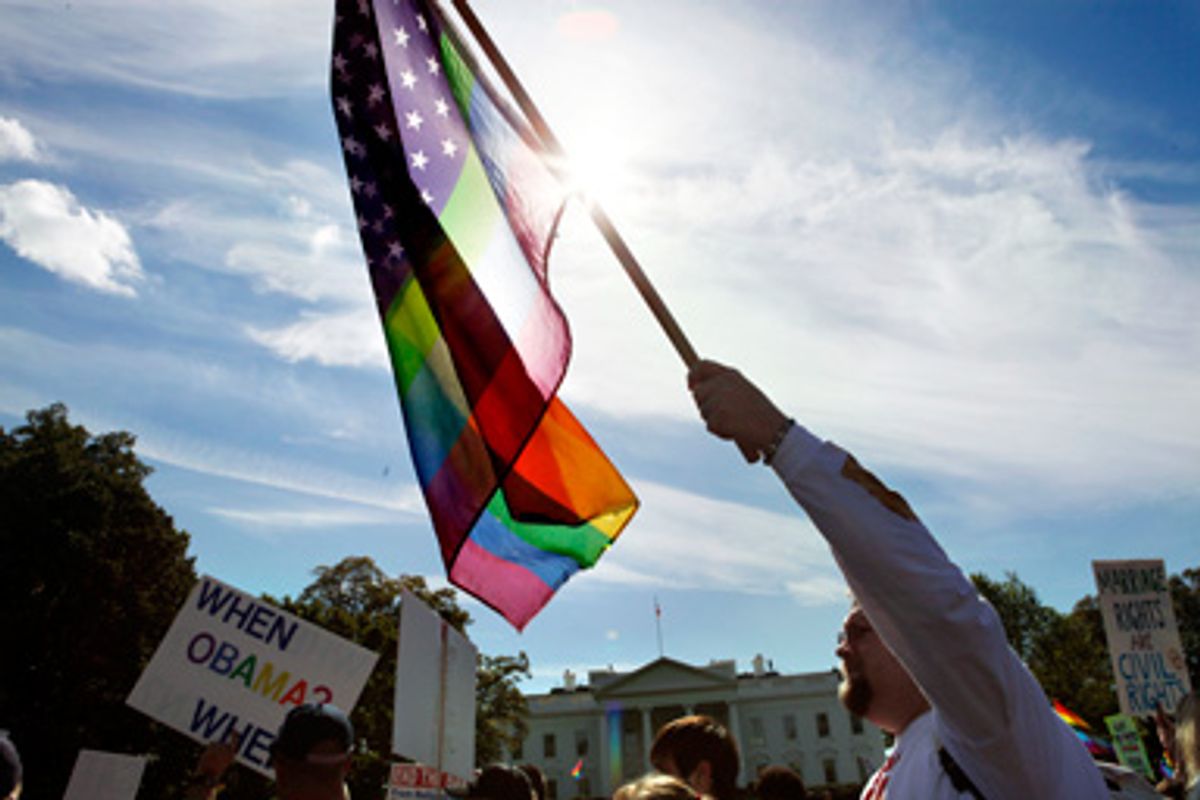 Thousands of gay rights advocates march past the White House during the National Equality March in Washington, on Sunday, Oct. 11, 2009.
--

Thousands of Americans marched in Washington yesterday to demand a fulfillment of Obama's long-stated and oft-repeated commitments on issues of gay equality, in what the NYT calls "the largest demonstration for gay rights here in nearly a decade."  That protest was preceded the day before by a virtual consensus 0f gay rights activists expressing extreme disappointment and frustration with Obama's speech to the Human Rights Campaign on Saturday night, where he merely repeated the same pledges he's been making for two years with no added specificity or time commitment.

About those protests -- and Democratic and progressive criticisms of Obama generally -- NBC's John Harwood "reported" the following last night:

Sure but if you look at the polling, Barack Obama is doing well with 90% or more of Democrats so the White House views this opposition as really part of the "internet left fringe" Lester.  And for a sign of how seriously the White House does or doesn’t take this opposition, one adviser told me today those bloggers need to take off their pajamas, get dressed and realize that governing a closely divided country is complicated and difficult.

In the updates to her post about all of this last night, Pam Spaulding notes with exasperation the excuses and denials flying around everywhere, with all sorts of people expressing doubt that anyone in the Obama White House could possibly be capable of such an ugly sentiment, particularly in light of the President's eloquent, on-the-record commitment to gay equality (other than marriage).  As is true for all instances of reckless and petty uses of anonymity like this, it's impossible to know how reflective it is of administration sentiment generally -- was this a senior White House official or some obscure low-level aide? -- but how could anyone who has paid any attention at all to the way Washington functions be doubtful that this sentiment is pervasive or find this at all unusual?

Just this weekend, a "top gay Democrat close to Obama" was granted anonymity by Politico to dismiss administration critics on gay issues as "naive."  Just six weeks ago, an equally cowardly "senior White House adviser" hiding behind anonymity told told The Washington Post that the only people who cared about the public option in health care were "the left of the left" -- those same fringe, irrational extremists.  In June, an anonymous "friend of John Brennan's" told Jane Mayer in The New Yorker that the people who prevented Brennan's nomination as CIA Director (because of his support for some of the most radical Bush Terrorism policies) were nothing more than "a few Cheeto-eating people in the basement working in their underwear who write blogs."  Last year, "Democrats on the Hill" anonymously dismissed opposition to telecom immunity and warrantless eavesdropping as nothing more than a fringe issue being exploited by Chris Dodd for his presidential campaign, and then anonymously warned Dodd to abandon his left-wing obstructionism if he wanted to resume good standing in the Democratic caucus.  Can anyone miss the pattern?

Every standard form of Washington behavior is on display here:  reporters like Harwood with absolutely no standards who grant anonymity to pass along playground insults.  Obama officials -- part of the Most Transparent Administration Ever -- who seem incapable of speaking about anything without cowardly hiding behind anonymity, even for on-the-record briefings.  Snide, Fox-News-mimicking dismissals from the Democratic establishment of any discontent or criticism of the President as coming from the fringe, Far Left.  And particular disdain for any instruments -- blogs, marches and  protests -- which the White House cannot control, which exist independent of the tightly coordinated, Rahm-dominated "veal pen" messaging system to which so many leading progressive organizations have meekly submitted themselves in order to ensure their own continued access, funding and future career options within the Democratic establishment.

The only thing remarkable about the comments Harwood passed on is that anyone would be surprised by them.  In that regard, the furor over Obama's complete inaction on gay issues vividly illustrates the same elements that shape political controversies in virtually every other area -- from war to civil liberties to health care and beyond:

I have no idea who the person is who said this to Harwood or how influential or obscure s/he might be, but whoever it is, that person is anything but unusual or aberrational.  Quite the opposite.

It's often forgotten or obscured, but the central political fact now is that the Democratic Party controls everything in Washington -- from the branches of government to favors doled out to lobbyists to the policies that Congress and the President enact.  Wars that are fought and bills that are or are not passed and policies that are maintained are, by definition, Democratic actions.  The dreaded Right can't dictate or stop anything.  That's the burden of having massive majorities in all areas -- everything that happens is the result of what the Democratic Party does, and that's why the divisions and conflicts that truly matter are ones with the party itself.  The "right v. left" and even "Democrat v. GOP" drama dominates most of our discourse, yet at this point it is a distracting and largely irrelevant food fight.  It's the Democrats who have won the last two elections by large margins and wield all the power, and increasingly the defining conflict is between those whose overarching allegiance is to Obama and the Party as ends in themselves, and those who see those things as mere means to more important ends.

John Harwood:   "one adviser told me today those bloggers need to take off their pajamas, get dressed and realize that governing a closely divided country is complicated and difficult."

Reality:  "The ban on openly gay men and women in the military should be repealed, American voters say 56 - 37 percent" and "Voters reject 58 - 35 percent, including 56 - 39 percent in military households, the argument that allowing openly gay men and women to serve would be divisive . . . " and "57% of Americans support the idea of allowing gays and lesbians to enter into civil unions or domestic partnerships to protect their rights."  Does this look "closely divided" to you? 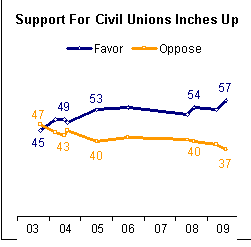 It's just isn't 1993 any longer. If Democrats can't deliver on basic issues with control of the White House, huge majorities in Congress and popular support, what can they do?  Other than this and this?

UPDATE II: As for the "you-have-to-wait" justification, here's the time-line of the Democratic Party mentality on all such matters:

January-May, 2009:  "You have to wait until we have a filibuster-proof majority in the Senate."

Once Obama is safely re-elected, it will be:  "you have to wait so you don't jeopardize the 2014 midterms."   That's the mentality that produces majority power which exists for no real purpose but to perpetuate itself.

UPDATE III: Greg Sargent reports that the White House, on the record, is denying that the anonymous comment reflects their view of blogs and the gay protesters.  Did anyone expect them to do anything else?   Greg also says that the White House has taken steps which show that they recognize the importance of blogs.  That's true; they're willing to harness the power of blogs to help advance the President's agenda, and that's smart.  But the issue is how they view criticisms from Democrats and the left of the President, not whether they're willing to use blogs to support Obama.

Adam Serwer argues that this stray, anonymous comment, standing alone, is too vague and insignificant to provide much meaning about anything.  That's true.   I doubt anyone disagrees with that.  Indeed, I said that myself.  But it's simply part of a larger record -- one composed of other similar comments and, more important, repeated actions from the White House and Democratic establishment -- that reflect indifference to criticisms of this sort (see here for the White House's active obstruction of efforts to repeal DADT).  Serwer is right that the comment is significant only because it illustrates what has long been apparent. The issue isn't whether "blogs" are respected but, rather, how the Party views complaints from their base that they are abandoning and violating what they claim are the party's core values. The recent history of Democrats couldn't be any clearer on that score.

UPDATE IV: Digby documents that Harwood himself, on numerous occasions, has expressed very similar sentiments about the fringe losers on the Left without even bothering to claim it was from a White House source.  As she notes, contempt for what is perceived to be "the Left" is one of the most cherished and central beliefs in Beltway dogma, and Harwood is a particularly virulent advocate of that view.  As is true for most Washington "journalists," Harwood is nothing more than a parroting spokesman for his government sources, and it's impossible to know where the line begins and ends between Harwood and White House officials, because there is no line.  They are like-minded and merged and this is almost certainly the tenor of the ongoing discussion he and his particular White House friends have.

But all of that underscores the real point here.  This has nothing to do with whether some anonymous Obama aide disparaged bloggers.  That's irrelevant.  The issue is whether the White House is indifferent to -- or even happy about -- criticism from what is perceived as "the Left" because it makes them seem more "centrist";  whether scorn for progressives is what drives them; and whether there is a huge gap between their public claims and what they really believe.  A willingness -- even eagerness -- to scorn progressives is and always has been the essence of Rahm Emanuel; that's why they built their House majority by expanding the Blue Dog caucus, stomping on the progressive agenda, and enabling every last Bush policy.  Many of the policies the administration has already adopted -- from indefinite detentions to renditions to resistance to investigations to state secrets and a whole slew of other issues -- reflect the same thing.  The snide, dismissive quote which Harwood passed along about "the Left" seems to be a very revealing glimpse into the id of at least a sizable portion of the White House towards those in their base who criticize what they do.

Harwood clarified today that the scorn from the Obama adviser wasn't directed to the gay protest per se, but also to criticism "from the Left" on "the war in Afghanistan and health care and Guantanamo."  They're saying:  we don't care about the criticisms coming from the Left on those issues (and Harwood even suggests they're happy about it) because it doesn't matter.  If that's how they think (and on those issues, it clearly seems to be), then that's obviously significant.   The challenge -- and it's a difficult one -- is always how to combat that cynical Emanuelian approach (how to criticize and pressure the White House when warranted) without strengthening and rejuvenating the incomparably vile Palinesque Right.