Democrats and Afghanistan: what's at stake

There's a reason those who benefit most from perpetual war are so aggressively pressuring Obama to escalate. 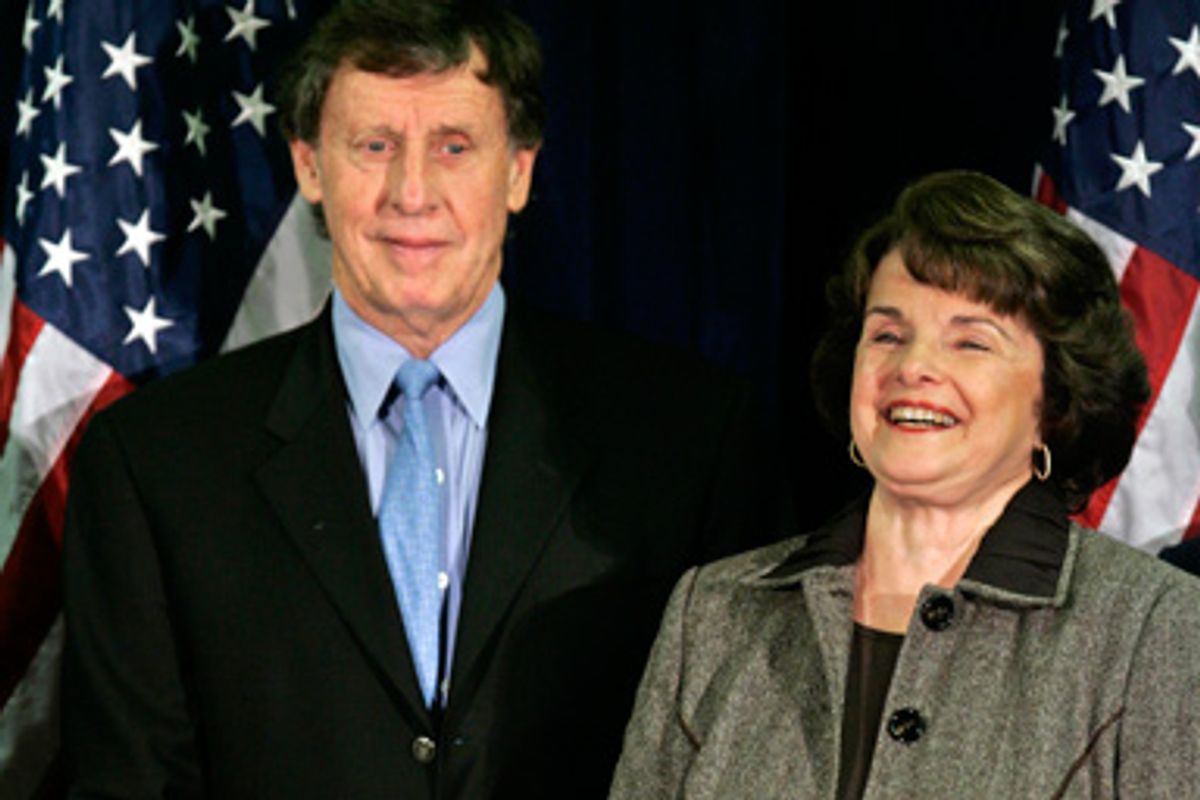 Dianne Feinstein is a fairly typical Democratic Senator from a solidly blue state.  In 2002, she voted to authorize the attack on Iraq.  Throughout the Bush years, she repeatedly stood with the GOP to fund the war without the conditions and timetables sought by some of her fellow Democrats.  Using her position on the Intelligence and Judiciary Committees, she was the key Democrat who twice voted to legalize Bush's warrantless eavesdropping program -- first with the Protect America Act (which Obama opposed) and then with the FISA Amendments Act of 2008, which also immunized lawbreaking telecoms.  She led the Senate effort to confirm Gen. Michael Hayden as CIA Director even after he had been caught presiding over the illegal surveillance program (confirmation which Obama opposed), and she then joined with Chuck Schumer to single-handedly assure Michael Mukasey's confirmation as Attorney General even after he refused to answer basic questions about torture and indefinite detention of U.S. citizens (confirmation which Obama also opposed).  In 2006, she proudly described herself as the "main Democratic sponsor" of a Constitutional amendment to criminalize flag burning.  Just this past week, she used her position as Chair of the Intelligence Committee to gut virtually every proposed reform to the Patriot Act.

Feinstein isn't merely a typical (though particularly destructive) Democratic Senator, but also a very typical Washington insider, as her substantial personal wealth is tied directly to the very National Security State policies she relentlessly works in the Senate to expand.  As her hometown San Francisco Chronicle put it in 2003 -- in an article headlined "War brings business to Feinstein spouse: Blum's firms win multimillion-dollar defense contracts in Iraq, Afghanistan":  "When it comes to scoring mega-military-related contracts, Sen. Dianne Feinstein's multimillionaire husband, Richard Blum, is right in the thick of things."  The article described billions of dollars in military contracts received by companies in which Blum has a large stake from the War on Terror, the Iraq War, the war in Afghanistan, and numerous other policies Feinstein works in the Senate to enable.  Other than the Daschles and the Bayhs, it's difficult to find a spousal team whose public and private activities feed off one another as synergistically as theirs do.

In light of this long record, it should come as absolutely no surprise that, last weekend, Feinstein joined with GOP Sen. Saxby Chambliss of Georgia to apply public pressure on Obama to escalate further the war in Afghanistan, announcing on ABC News that "she didn't see how President Barack Obama could turn down [Gen. McChrystal's] request for 40,000 additional troops in Afghanistan."  Obama deserves some credit for at least refusing to capitulate immediately to the military's demands without taking time to consider alternative options.  Russ Feingold just wrote another Op-Ed arguing for a withdrawal timetable from Afghanistan, but that option is not even part of the Washington debate.  The only issue is whether to escalate and, if so, by how much.  The Washington Post today reported that as part of Obama's March order for 21,000 more troops to Afghanistan, "the White House has also authorized -- and the Pentagon is deploying -- at least 13,000 troops beyond that number."  With Democrats like Feinstein controlling the U.S. Senate, is it any wonder that our status as a perpetual war nation appears to continue indefinitely?

In The Boston Globe this week, military expert and history Professor Andrew Bacevich wrote one of the best Op-Eds yet written about what is truly at stake in the debate over Afghanistan.  I don't want to excerpt too much of it because I want to encourage as many people as possible to read it in its entirety, but Bacevich perfectly makes the primary point I've been trying to make about this debate:  that at least as much as determining what we do in Afghanistan, the debate is a "proxy" for much larger issues, whereby escalation by Obama will  -- as Bacevich puts it -- "embrace George W. Bush’s concept of open-ended war as the essential response to violent jihadism" and "affirm that military might will remain the principal instrument for exercising American global leadership, as has been the case for decades."  Bacevich explains:

Implementing the McChrystal plan will perpetuate the longstanding fundamentals of US national security policy:  maintaining a global military presence, configuring US forces for global power projection, and employing those forces to intervene on a global basis. The McChrystal plan modestly updates these fundamentals to account for the lessons of 9/11 and Iraq, cultural awareness and sensitivity nudging aside advanced technology as the signature of American military power, for example. Yet at its core, the McChrystal plan aims to avert change. Its purpose - despite 9/11 and despite the failures of Iraq - is to preserve the status quo. . . .

If the president assents to McChrystal’s request, he will void his promise of change at least so far as national security policy is concerned. The Afghanistan war will continue until the end of his first term and probably beyond. It will consume hundreds of billions of dollars. It will result in hundreds or perhaps thousands more American combat deaths - costs that the hawks are loath to acknowledge.

As the fighting drags on from one year to the next, the engagement of US forces in armed nation-building projects in distant lands will become the new normalcy. Americans of all ages will come to accept war as a perpetual condition, as young Americans already do. That "keeping Americans safe" obliges the United States to seek, maintain, and exploit unambiguous military supremacy will become utterly uncontroversial.

That is exactly what is at stake in the debate over Afghanistan.  And that's exactly why those who benefit most from our state of perpetual war -- people like Dianne Feinstein and the entire National Security State apparatus -- are so eager for it not only to continue, but for it to expand.  It's not only perpetual war that is the result, but also the endless civil liberties erosions and expansions of government power -- detention, surveillance and secrecy -- that inevitably accompany it.

Along those lines, PBS's Frontline tonight examines Afghanistan in a program pointedly entitled "Obama's War."  It focuses on a Marine unit in Southern Afghanistan, in a province where the Taliban has long thrived.  Virtually the entire segment is based on video footage from a freelance photographer embedded with the Marines, and it provides an extremely balanced and factual picture of at least part of what we are doing in that country, and really enables one, on a visceral level, to get a sense for the military mission.  It's roughly 24 minutes in length and highly, highly recommended:

UPDATE:  This anecdote is from Iraq, but obviously applies just the same to illustrate the problems in Afghanistan:

Recounted by (now) Lt. Col. Parmeter from an encounter near Samarra in Salahuddin province in 2004. He recalls: "You have a bunch of epiphanies over the course of your experience here, and it made me think:  how are we perceived, who are we to them?"

Watch the Frontline segment and decide how likely it is that the U.S. military is going to form some warm and productive partnership with the "Afghan people" against the Taliban, on which the counter-insurgency doctrine depends.

UPDATE II:  In The New Republic, Alex Rossmiller has a well-reasoned analysis of how many of the same misleading, bullying tactics from the Iraq debate are being used to justify escalation and how the U.S. can prevent a return of Taliban rule (and particularly a return of Al Qaeda) without fighting an endless war there.  One need not agree with all of Rossmiller's observations (I don't) to find his argument to be a refreshingly factual assessment of the realities there.