It was hot. It was heavy. There was just one problem: I was wearing control-top undergarments 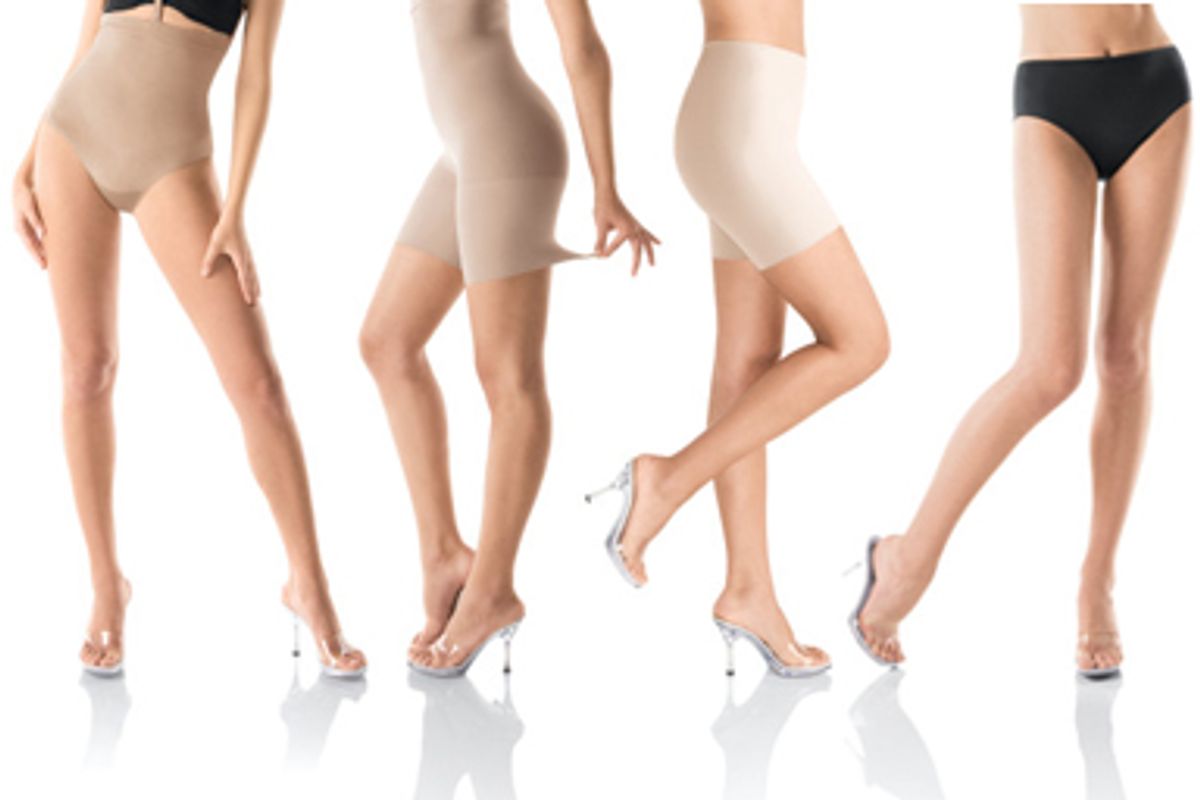 On Saturday afternoon, I bought a darling bra-and-panty set, the kind with sweet, swirly black lace and pale-pink bows. It's the sort of coquettish ensemble you always hope you'll be wearing when a gentleman caller happens to separate you from your polka-dot swing dress -- not the raggedy underwear from Target, the elastic spazzing out the hems, not the cheap bra with one clasp missing and a mysterious rip around the areola, but proper vixen attire, clean and comely.

For the uninitiated, Spanx is a brand of control-top undergarment, similar to ye olde girdle but with a 21st-century, you-go-girl wink. Oprah loves Spanx. Tyra loves Spanx. And what's not to love? It's a brilliantly engineered fabric that disappears your period bloat and your pregnancy weight and your beer belly, that helps a woman bridge that frustrating divide between who she is and who she'd like to be. Like so many of these modern contraptions, it's three parts miracle, one part torture: You may feel like your crotch is in shrink-wrap, but damn, look at your silhouette.

Actually, had I predicted that make-out, I might have done a few things differently: Shaved my legs, daubed my collarbone with the French perfume that sits forgotten on a high shelf in my closet, traded my cheerless, four-prong industrial bra for a tart Elle Macpherson push-up. Also, I would have bathed. But for goddamn certain I would not have worn those Spanx. Because Spanx are not just clumsy and nonsexual -- like torn panties or mismatched socks -- they draw attention to the very thing I'm scrambling to hide. Hmm, which part of my body am I most insecure about? How about this part currently suffocated by beige elastic? I felt like I'd been caught wearing a toupee. In my pants.

And so what do you do in that instance? When the male in question slips his hand underneath that clingy red fabric, his hand edging ever closer to an unmistakable elastic roadblock somewhere around mid-thigh? What do you do? Do you play the tease and swat his hand away? Do you make up an excuse -- my goodness, look at the time! -- pretending to be some kind of proper lady? Do you rip off those Spanx, taking this moment from soft-core make-out into a triple-X delight? Do you pretend it's normal, say nothing, as though all the girls are wearing restrictive bicycle shorts these days?

I still don't know what I should have done. What I said was, "If I'd known we were gonna make out, I so totally would not have worn Spanx."

There is a scene reminiscent of this in the movie version of "Bridget Jones' Diary," in which the caddish Daniel (Hugh Grant) makes a move on our crush-stricken Ms. Jones (Renée Zellweger), poking underneath her tight black dress only to find, he says with tart English hyperbole, "absolutely enormous panties." Bridget laughs in horror to which he coolly says, "Don't be ashamed. I'm wearing something similar myself." That 2001 movie came out before Spanx was a household brand -- like Kleenex, or Tampax, or Playtex -- but awkward figure-shaping harnesses are as much a part of the modern female experience as high heels and lip gloss. It's funny to me when people roll their eyes over the exacting beauty rituals of Betty Draper and Scarlett O'Hara -- how burdensome the curlers or the breath-constricting corsets. Meanwhile, we squeeze our bodies into skinny jeans, flat-iron our frizz, bleach our teeth, slather our skin in bird poop, pump our wrinkly brows with botulism, thread our eyebrows and wax our hoohas. And I haven't even mentioned plastic surgery yet.

But for some reason, acknowledging these sleights-of-hand can feel akin to sexual humiliation. I remember another movie scene, this one imprinted on me at 10 years old, from the 1985 movie "St. Elmo's Fire," in which Billy (Rob Lowe), the caddish saxophone player who makes a move on crush-stricken Wendy (Mare Winningham), pokes underneath her dowdy dress. "What the hell is this?" he asks, snapping the fabric of a thick white girdle. He then cracks, to her misery, "It's your scuba suit!" Even as a kid, I knew no girl ever wanted to be Wendy, that the girdle spoke not just to her shameful weight issues but a whole suffocated worldview: She was uptight and prudish -- nothing like that goddess Demi Moore (who played the ravenous cokehead Jules), her irresistible, pre-boob job body arching back on a jukebox while Rob Lowe grabbed that wild, crimped hair and stuck his tongue down her throat. (Now that was a make-out.) But the fates made my body less Demi, more Wendy, and my top drawer is filled with various consumer efforts to keep that to myself: expensive tights, body shapers, complex contraptions that require multiple straps. In high school, the long-legged drill team majorettes swore by two layers of Donna Karan super-control top pantyhose, which was a bit like wearing steel underpants, and if you think Spanx are tricky, try negotiating that after three beers. Forget chastity belts. The evangelical right should take their daughters to the Dillards hosiery department.

But back to my surprise make-out. Because here is what I want to know: If you're a guy, what do you do when the girl you are tangling tongues with turns out to be wearing Spanx? Is it embarrassing for you, too? Do you even care? Do you try to ignore it, disappear the image, just like the girl you are with is trying to disappear her flaws, so that you can store that moment in your spank bank without the messy realities of the moment, of her body, of this otherwise lovely little tussle?

By the way, the guy I was with said nothing. Which seemed as good a move as any.

Because, look, we are both, men and women, uncovering surprising details in those moments of intimacy, we are all putting our hand in expecting one thing and discovering another -- that the hair is thinner, that the back is hairier, that the body parts are rounder or larger or harder than your fingertips expected. Not that any of this matters necessarily but that it registers, because part of what is thrilling, and terrifying, and unbearably hot about sex is the dismantling of the other person's public self, the surprise of finding out what is underneath their clothes.

This reminds me of yet another movie scene, this one in the 1988 Keenen Ivory Wayans film "I'm Gonna Git You Sucka," in which our hero nabs a luscious woman at the bar by telling her he has a 12-inch cock. After they retire to her bedroom, he's forced to confess his modest unit. "Well, I have a confession to make too," she coos. She extracts color contacts. Then she yanks off her wig to reveal a shiny bald pate. She tosses her falsies across the room, deflates a plastic booty, then -- the kicker! -- detaches her prosthetic leg.

It's a clever little gag about the cosmic joke of seduction and the fantasy of opposite-sex perfection. Of course, the real cosmic joke is that we don't need any of it -- not the smoke and mirrors of the beauty industrial complex or, for God's sake, the dick-inflating racket -- because the sexiest stance is the one in which we are just OK with our bodies, our flawed, occasionally lumpen, odd and fascinating bodies, and we don't scramble to turn out the light every time a moment heats up, we don’t ruin the fragile friction of a sexual connection because we are too busy hiding underneath covers and worrying about our cellulite (or our abs, or our calf muscles). The sexiest stance is always, always to be comfortable in your own skin, even if your skin is looser and baggier than you hope it might be (and really, whose isn't?).

But the truth is that I love glamour. I love coquettish lingerie. I also love Häagen-Dazs, and making out, and that red polka-dot swing dress I can't quite fit into right now, and comfort, and male attention, and sometimes I think the real trick of womanhood (of adulthood, probably) is toggling back and forth between those desires without losing yourself in any one. Of course I would love to be the woman who slips on that dress and looks fabulous without ancillary assistance, but let me tell you I did give that a whirl, and I looked possibly pregnant. And while the gentleman caller may or may not have cared, I know that I cared, desperately, that I would spend the whole evening at an otherwise enjoyable get-together tugging and twisting and turning at improbable angles. And so the Spanx gave me a jolt of confidence, a license to swing my hips lustily and allow strangers' eyes to linger over my body without fidgeting and land surprise make-outs with gentleman callers, and that is a pretty smashing bargain for $10 at Target.

Look, I would never suggest anyone wear Spanx to a make-out. But if it happens, I'm just saying you can survive unscathed -- no shame, no tragedy, a modicum of visible hickies. Then again, like I told you, I went the next day and bought a flirty little bra-and-panty ensemble. In case there was another incident, you know, I needed to be prepared.