How to avoid the GOP's mistakes during the Bush years?

"The left has held Obama's feet to the fire way more than the right ever did to Bush": is that a good thing? 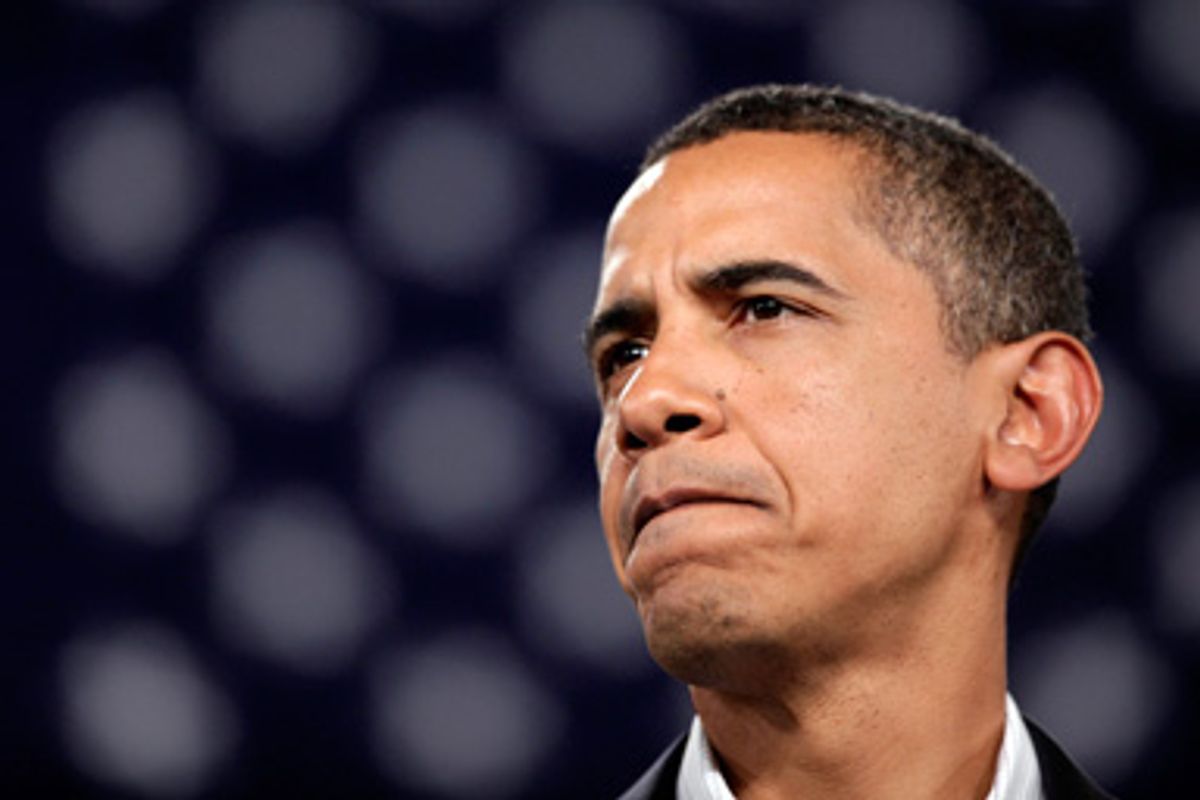 From day one of his administration, the left has held Barack Obama's feet to the fire way more than the right ever did to George W. Bush -- at least until Bush's nomination of Harriet Miers to the Supreme Court. Put another way: the diversity of opinion about Obama and his presidency among activist Dems far exceeds early Bush-era diversity of opinion among activist GOPers.

It's worth remembering how the GOP and the Right treated Bush and the role they played in his presidency.  Ambinder says that it wasn't until the Miers nomination that the Right criticized Bush in any meaningful way.  That's pretty extraordinary, since that took place in September, 2005 -- almost five full years into the Bush presidency.  For the first five years, look at what happened:

The Right's leading commentators saw their role as defending the Bush administration no matter what it did, rather than expressing their honest opinions, as Rush Limbaugh infamously admitted after the GOP lost control of Congress in the 2006 election:   "I feel liberated. . .  I no longer am going to have to carry the water for people who I don't think deserve having their water carried."  Personalized hagiographies were churned out glorifying the President in borderline-religious tones.  Conservative groups devoted themselves to blind defense of the White House -- justifying whatever Bush did and turning themselves into a political arm of the administration -- rather than exerting pressure for adherence to their agenda.

Conservatives who criticized Bush were deemed the enemy and were excommunicated:  see this 2006 New York Times profile of Bruce Bartlett to see how that worked -- "An Outspoken Conservative Loses his Place at the Table" -- or look at how people like Andrew Sullivan were suddenly deemed "liberals" because of their criticisms of Bush.  Those who, in general, criticized the President too harshly were deemed unpatriotic, standing with Terrorists, and suffering from personalized and emotional hatred (Bush Derangement Syndrome) -- as though excessive criticism was some sort of offense against decency or even a personal failing.  As Bill Kristol himself acknowledged about the Right during Bush's first term:  "Bush was the movement and the cause."  One of the first widely-cited posts I ever wrote after I began blogging was about this phenomenon, titled "Do Bush followers have a political ideology?," which expressed the point this way:  "'conservatism' is now a term used to describe personal loyalty to the leader (just as 'liberal' is used to describe disloyalty to that leader), and no longer refers to a set of beliefs about government."

One need only look at the entrenched rot that is now the conservative movement and the Republican Party to see what happens when that mentality prevails, when internal dissent is treated as blasphemy and well-intentioned critics are deemed suspect and even harmful to The Cause.  Ultimately, avoiding that is really not all that complicated.  All one has to do is act like a citizen first, not a party apparatchik or fan club devotee, which means nothing more than this:

(1) If Obama takes action or makes a decision that you think is good and constructive, say so and give him credit;

(2) If Obama takes action or makes a decision that you think is bad, wrong and/or destructive, say so and criticize him for it;

(3) If there were things you claimed to find so horrible and wrong when Bush did them (indefinite detention, denial of habeas corpus, renditions, state secrets, endless wars, military commissions, compulsive secrecy), and Obama does them, apply the same standards.  As Bob Herbert put it rather simply:  "Policies that were wrong under George W. Bush are no less wrong because Barack Obama is in the White House."

(4) If there are ongoing debates about policy, agitate for the outcome you think is best rather than the one the White House wants, where those two are different.  If there are policies you think should be adopted that aren't, complain about that, critique it, and find ways to maximize pressure.

(5) Don't personalize political leaders and be driven by emotional attachments to them one way or the other.  They're nothing more than public servants -- an extremely powerful one in the case of the President -- who should be assessed based exclusively on their actions.

(6) If anything, when it comes to the most powerful political official on the planet, it's best to err on the side of excessive checks and criticism rather than excessive deference and trust.  Presidents have no shortage of people and institutions loyally devoted to their message and agenda.

I'm not suggesting anyone should do these things -- there are lots of valid reasons why people might choose not to do some or all of them, and there are lots of different roles people can legitimately choose to play.  But those who do choose to do these things are acting as nothing than more than rational citizens, all of which is vital for avoiding the behaviors that turned the Right into a dissent-stifling cult of personality erected around George W. Bush.

Yesterday in The Washington Post, Eugene Robinson returned to the DNC's pernicious theme of last week by arguing that those who were "mocking our nation's leader . . . as unworthy of" the Nobel Peace Prize have "joined with the Taliban"; are "exhibiting what [conservatives], in a different context, surely would describe as 'Hanoi Jane' behavior"; have violated core precepts of "good manners"; and deviated from the "only reasonable response":  to congratulate the President.  But also yesterday, Matt Taibbi wrote one of the most scathing (and typically insightful) criticisms yet of Obama's Nobel Peace Prize, based on the twisted understanding of "peace" which Western Europe and the U.S. uniquely share and the "change" that Obama actually seems to represent.

Has Taibbi really committed a breach against public decency by expressing doubt that Obama's actions reflect genuine aspirations for peace?   That's not a legitimate view?  That can't reasonably be questioned and debated?  How about the numerous liberals (Ezra Klein, Robert Reich, The Nation's Richard Kim, Naomi Klein) and -- according to one poll -- a majority of American and British citizens who also believe the Prize was not deserved?  Are we actually at the point for some people -- as we seem to be -- where a person is not only obligated to assume the core goodness of Obama but also agree and affirm that, a mere nine months into his presidency, he deserves the Nobel Peace Prize?   That's now a mandated belief?  In order to be a good, patriotic citizen and a decent human being, that's the requirement one has to fulfill?  If that became the prevailing view, wouldn't the distinction Ambinder highlighted between the Bush and Obama years cease to exist?

Nate Silver, who can generally (though not always) be counted on to defend the Obama administration, made this accurate observation yesterday:

What the White House does seem to be periodically annoyed with and perpetually dismissive of, however, is criticism of its activities from the left, whether it comes from new media or more traditional outlets. . . . Where I can "endorse" the frustration of many on the left, however, is on issues where popular sentiment seems to be on their side, such as on the public option or gays-in-the-military. . . . I don't think those who elected Obama expected him to give deference to the received wisdom; on the contary, it was his rhetoric of transformation that distinguished him from Hillary Clinton. Since roughly the time of the Jeremiah Wright incident, however, virtually every time the Obama campaign/administration has had a choice between a bold action and a cautious one, it has taken the more cautious path.

At least as I always perceived it, the "liberal blogosphere" -- to the extent that's a cognizable entity -- has devoted itself to criticisms of two failed institutions:  (1) the establishment media and (2) the Democratic Party leadership.  And the primary cause of discontent with the Party is exactly the criticism which Silver applies here to the Obama White House:  meekness, a constant compulsion to accommodate so-called "centrism" for political gain, a failure to embrace true transformative change (regardless of whether that's due to political fear or actual belief).  Why would anyone expect -- or want -- blogs, which arose as an outside agitating force against Beltway institutions and leaders, suddenly to cease this pressure and criticisms because now it's Barack Obama leading the way in doing these things instead of Harry Reid, Rahm Emanuel, Steny Hoyer and Congressional Democrats?

Everyone is free to do whatever they want with their columns and blogs, of course, but I personally have never understood why someone would want to turn themselves into an arm of the Obama White House -- to "carry water" for the Party apparatus, using Rush Limbaugh's confessional.  Barack Obama has a massive communications team already devoted to that function.  They even have their own website and blog that fills that role.  The DNC, DCCC, and scores of other huge, massively-funded institutions already exist to justify whatever he does, attack the GOP, and generally promote the Party and administration line.  Blogs which replicate that function can't add very much.

I've always seen the unique value of political blogs as applying outside citizen pressure on Beltway institutional political power -- which now resides primarily in Barack Obama and the Democrats -- to reject or at least resist the standard Washington influences.  Every well-funded institutional faction is working feverishly using every means they have -- lobbyists, money, advertising -- to pressure the Democratic Party to serve their agenda.  Why shouldn't "people on the Left" do the same?  Shouldn't health care activists care more about the public option than Obama's political standing?  Shouldn't gay rights activists be agitating aggressively for concrete action rather than pretty speeches?  Shouldn't civil libertarians be constantly protesting an administration that has stomped on their beliefs?  Shouldn't anti-war activists and empire opponents be objecting to the obvious incompatibility between escalating a war and being deemed the earth's leading peace activist?

It's fine that some people believe the most constructive thing to do is to support the Democratic Party and Obama, and whose primary thrill is dressing up in tuxedos and going into hotel ballrooms to swoon with adoration for the President like he's a rock star.  He's likable and inspires a lot of people with his rhetoric, so that's understandable, or at least inevitable.  And it's also fine, even useful, to have organizations close to the administration if they maintain at least some independence.  But unless one wants to replicate the same dynamic that prevailed in the Bush era, it's vital that not everyone be devoted to that mission.  Without individuals and groups devoted primarily to these issues rather than the President and the Party, those issues will be ignored.  That's just how politicians, by definition, function.  And whatever else is true, creating a climate where criticizing Obama is equated with a breach of one's citizenship or progressive duties -- even where the criticism is aggressive and "disrespectful," as one could describe Taibbi's critique -- is the surest way to follow the GOP down its path of well-deserved self-destruction.

It's simply inconceivable that a leading conservative media figure would have ever expressed such strident opposition to a central Bush policy, let alone advocated a resignation of this sort, especially during Bush's first term.  Obviously, people can debate -- and are debating -- whether this is a good thing, but there's no question that Ambinder is right:  "the left has held Barack Obama's feet to the fire way more than the right ever did to George W. Bush."