The boy and the balloon

A heart-stopping media spectacle ends as 6-year-old Falcon Heene is found safe. But what were we watching, and why? 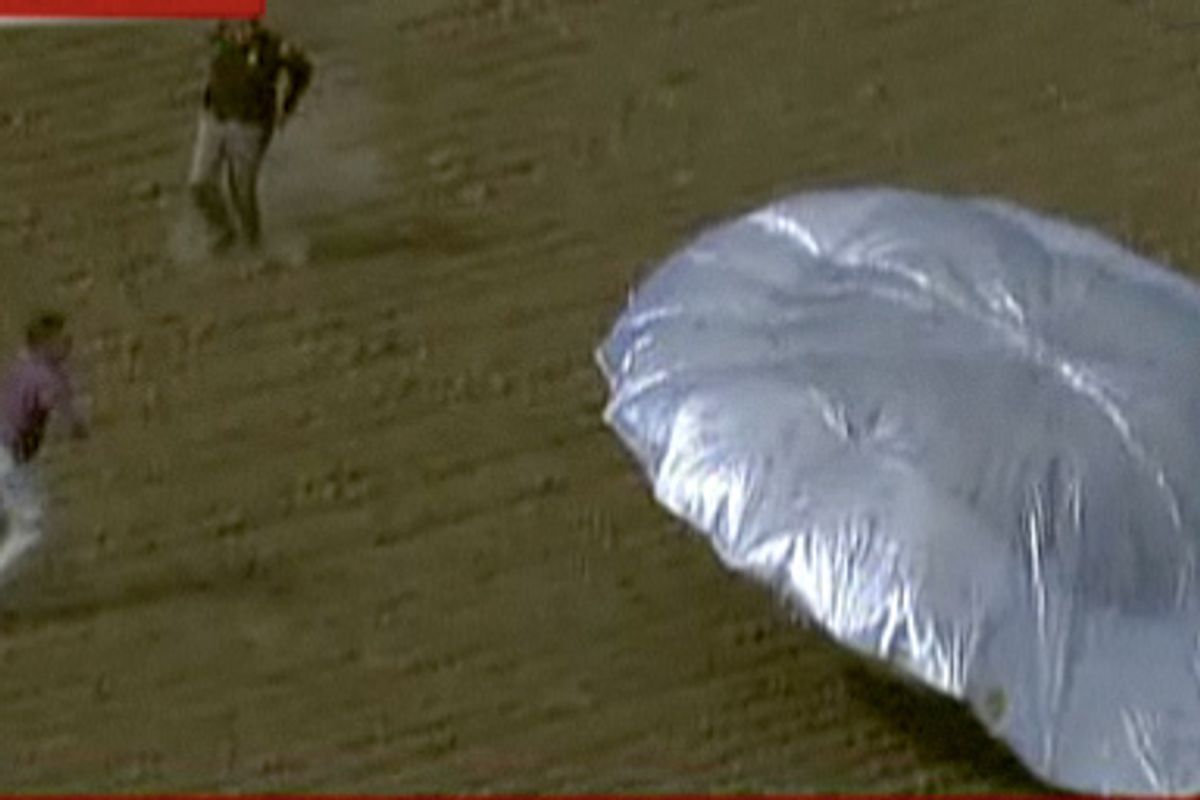 In a media spectacle of nightmarish dimensions, stunned viewers nationwide watched on Thursday afternoon as an experimental storm-chasing balloon floated around in strong winds 400 feet above Fort Collins, Colo., thinking that a 6-year-old boy was still inside. The balloon was tethered in his storm-chaser parents' backyard; his sibling reported seeing the boy crawl in before the balloon blew away. Eventually, the boy was found in a box in his attic, according to CNN. But who could know that would happen as the heart-stopping story unfolded?

It began mid-afternoon, and we watched for almost an hour as this silver thing buffeted around in the wind. Viewers gasped as the balloon landed, slowly, maybe slowly enough that a kid inside might still be alive.

But then, the rescue workers gathered around it didn't approach the balloon quickly to see if there was a child inside. Finally, they tied the balloon to the ground and then poked holes in it, but there was no sign of the kid.

"According to police, there is no one inside that balloon," a CNN anchor finally told us. So we began to wonder: When did the kid fall out? Is he alive? Is this all a hoax? Did this couple, who appeared on "Wife Swap," do this to get attention?

Was the kid ever in the balloon to begin with?

By 4 p.m, the CNN producer spoke to someone from the Larimer County Sheriff's Office who said the search was on for the 6-year-old boy.

At first the Sheriff's department was reportedly looking for the boy in and around the home, because they said the basket hadn't been breached. Suddenly it seemed possible that the boy was never in the balloon in the first place, which would mean that we were all watching that thing floating around in the air for a good 45 minutes for no reason, like idle house cats.

Later, though, CNN reported that the basket at the bottom of the balloon had fallen off before they started filming its flight, and that National Guard helicopters were taking off to look for the boy before nightfall. Then, by 6 p.m., it was over: The boy was alive. But it had momentarily transformed us into 21st century rubberneckers, anxious to make ourselves sick over the tragic news story of the moment.

Note: This story was updated several times after its initial posting.