This foul witch hunt may be the most despicable domestic political event of the year.

This might actually be the most despicable domestic political event of the year:

A group of House Republicans is calling for an investigation into whether a leading American Muslim advocacy group tried to "spy" on congressional offices by placing interns on key security committees.

CAIR said it had a particular interest in influencing the judiciary, intelligence and homeland security committees. . . . Mrs. Myrick and Republican Reps. John Shadegg of Arizona, Paul Broun of Georgia and Trent Franks of Arizona called Wednesday for an investigation by the House sergeant-at-arms into whether CAIR was successful in planting congressional interns.

"If an organization that is connected to or supports terrorists is running influence operations or planting spies in key national security-related congressional offices, I think this needs to be made known," Mr. Broun said.

CAIR is a non-profit organization of American citizens who are Muslim and their "mission is to enhance understanding of Islam, encourage dialogue, protect civil liberties, empower American Muslims, and build coalitions that promote justice and mutual understanding."  They stand accused of plotting to influence members of Congress and trying to help interns obtain positions in Congress in order to advance their political agenda.  That's consistent with what virtually every political advocacy group in the nation does; it's normally called activism and democracy.  But because, in this case, it's a group of Muslims who are doing this, these House Republicans are depicting it as some sort of nefarious espionage plot against the U.S. that demands a criminal investigation.  The Fox News headline screams:

All that from an "internal memo" they uncovered which discusses how CAIR can help Muslim-Americans obtain internship positions with Congressional committees (click to enlarge):

While the Republicans said they did not know of specific legislation that CAIR had affected, Franks, a Judiciary Committee member, said he wouldn’t be surprised if it was trying to amend the Patriot Act.

“One of the target policies that they might be concerned about is the Patriot Act itself -- those things that give us the greatest tools to be able to surveil those conversations outside of this country . . .  and I think organizations like CAIR would like to diminish that.”

Patriot Act reforms have long been advocated by what The New York Times called "an unlikely coalition of liberal civil-rights advocates, conservative libertarians, gun-rights supporters and medical privacy advocates."  Several Senators -- including the Democrats' second-highest ranking member, Dick Durbin -- just voted (unsuccessfully) to impose new limits on that law.  But when "America's largest Islamic civil liberties group" takes the same position, these crazed, blatantly bigoted House Republicans spit out McCarthyite smears trying to imply that they're working from within to help Terrorists attack America.  It's nothing less than an attempt to criminalize organized political activity by and on behalf of American Muslims.

Just to underscore how extremist the House GOP caucus is, this hysteria is all based on a new book entitled "Muslim Mafia: Inside the Secret Underworld That's Conspiring to Islamize America."  That's the source which these House members are using.  In fact, one of the GOP House members, Rep. Sue Myrick of North Carolina, wrote the foreword to the book.  One of the two authors of that book, Dave Gaubatz, maintains this website, where he's hawking the book through Paypal.  Here's his mission statement at the top of the page:

The donations will assist in exposing Islamic terrorist operations in America. The goal of the organizations: An Islamic Ummah (Nation) Worldwide, Under Islamic Sharia Law. These goals are widely distributed across America, yet ignored by most of our politicians and the Department of Homeland Security.

The entire site is filled with the most extreme and repugnant anti-Muslim paranoia imaginable, claiming that "CAIR represents the ideology of terrorist groups"; warning that "CAIR places 'insiders' into Congressional offices in order to push the CAIR and Islamic terrorist agendas"; displaying a photograph of Rep. Keith Ellison, the first Muslim-American elected to Congress, with this caption:  "One of your leading elected officials (supporter of CAIR) with researcher Chris Gaubatz.  How much information do we have on Carson and Congressman Keith Ellison?; and warning that "Young Muslim children are being taught across America to engage in violence against non Muslims and Muslims who do not uphold Sharia law."  It warns:

Unless we change the concerns I mentioned, our country will soon evolve into a Socialist country, Sharia law will continue to 'creep' into our society, Islamic based terrorist supporting organizations will continue the implementation of achieving the final objective of an Islamic Ummah in America and worldwide.

Mr. Obama was a self admitted cocaine user, alcohol, and chose friends (Reverend Wright) who hated America and were terrorists (Bill Ayers). Note: More could be named. Based on this and this alone, this is not the role model we want our children to follow, nor to watch on TV at school. But why do leading media from the right and left never speak of Obama's drug days? Because many of them have had their own drug days. . . .

It is time leaders in our country begin speaking out and simply telling the American people the basic truth why Obama and his friends are not repeted [sic] and American parents do not consider him to be a role model for our children. His primary method of resolving national and internatonal [sic] disputes he as generated) is to invite offended parties to the White House to conume [sic] alcoholic beverages. Again, not the method most parents would use to resolve serious situations and not what we want our children to view as an appropriate method. Dave G.

He previously called Obama a "crack head" and wrote that "a vote for Hussein Obama is a vote for Sharia Law."

Gaubatz -- a civilian agent who worked for The U.S. Air Force's Office of Special Investigations -- was also the source for the "bombshell story" from supreme Muslim-hater Melanie Phillips, who wrote a 2007 piece for the British Spectator with this screaming headline, immediately promoted by leading right-wing blogs:  "I found Saddam's WMD Bunker!"  It details how Gaubatz personally found bunkers where Saddam's WMDs were kept in Iraq, but "the [Bush] administration failed to act on his information, ‘lost’ his classified reports and is now doing everything it can to prevent disclosure of the terrible fact that, through its own incompetence, it allowed Saddam’s WMD to end up in the hands of the very terrorist states against whom it is so controversially at war."  As a result, Saddam's WMD are now in the hands of Syria, and the world has been fooled into believing that he had none.

In 2006, Gaubatz created a project called "Mapping Sharia in America", the purpose of which was to create a comprehensive map of every mosque and Islamic school in the U.S.  This is what he wrote:

It is our task to conduct an extensive mapping of all the Islamic day schools, mosques, and other identifiable organizations in the US and to determine which ones teach or preach Islamic law, Sharib.

This investigation will also map the leadership of these Muslim organizations and their other affiliations. We will also attempt to uncover any related businesses used or run by the organizations as fronts for money laundering and other illicit activities.

Finally, we will examine and map any potential targets situated near these organizations, such as city, county, and federal government buildings, schools and universities, US military installations, major utility or infrastructure sites (i.e., nuclear installations, pipelines, water supply, etc.), and transportation hubs.

Back in 2007, the libertarian Jim Henley detailed more facts demonstrating that Gaubatz is a "paranoid, racist loon."  Just read some of that.  Or this.

This is the ranting, insane hatemonger who House Republicans are now using as their expert source to demand an investigation into CAIR's villainous plot to place interns on Congressional committees.  It would be darkly humorous if it weren't so ugly and dangerous.  These House members highlight CAIR's status as an unindicted co-conspirator in a Muslim charity case without noting that one of the most powerful groups in Congress has actually been directly involved in an espionage case against the U.S., while numerous other corporations which receive substantial largesse from Congress have been convicted of all sorts of serious wrongdoing.

This is the precise rank fear-mongering and compulsive need for an Internal Enemy that has driven American policy and political culture for the entire decade.  Brave Congressional Democrats love to spend their time formally condemning people.  If anything merits formal condemnation, it's this foul Republican witch hunt.

UPDATE:  As sphodros notes in comments, here's a chart reflecting the religious affiliation of members of the current Congress: 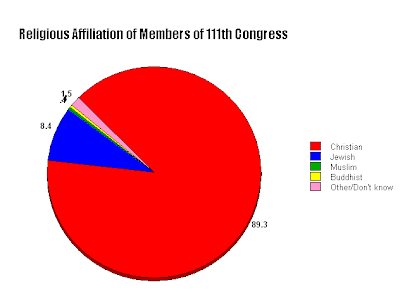 89.3 percent of the members of Congress are Christian, 8.4% are Jewish, and a grand total of 2 members (.4%) are Muslim.  Their representation on the chart (the green section) is so small they're practically invisible.  Muslims comprise .6% of the American population.  Yet these people are running around screaming about the imminent "Islamization of America" and imposition of Sharia law and calling for criminal investigations because a few interns on Congressional Committees -- American citizens -- might be Muslim and are therefore "spies."  These are members of the U.S. House of Representatives doing that.   And they're not alone:

In another conversation, [Joe Lieberman] told me that he was reading "America Alone," a book by the conservative commentator Mark Steyn, which argues that Europe is succumbing, demographically and culturally, to an onslaught by Islam, leaving America friendless in its confrontation with Islamic extremism [GG: that book also flirts with explicit advocacy of anti-Muslim genocide].

"The thing I quote most from it is the power of demographics, in Europe particularly," Lieberman said. "That’s what struck me the most. But the other part is a kind of confirmation of what I know and what I’ve read elsewhere, which is that Islamist extremism has an ideology, and it’s expansionist, it’s an aggressive ideology. And the title I took to mean that we Americans will have ultimate responsibility for stopping this expansionism."

They're breeding like rabbits, want to take over everything (through the power of interns on Congressional Committees), and we must stop them.  It's the solemn challenge of our generation.

In remarks about domestic security threats, Rep. Sue Myrick of Charlotte said, "Look at who runs all the convenience stores across the country". . .

Myrick’s comments came during a speech to the conservative Heritage Foundation last week about what she called Americans’ lack of readiness to deal with future terrorist attacks. During a question-and-answer session, she spoke about danger within the country.

"You know, and this can be misconstrued, but honest to goodness (husband) Ed and I for years, for 20 years, have been saying, 'You know, look at who runs all the convenience stores across the country.'  Every little town you go into, you know?" . . .

But Ibrahim Hooper, spokesman for the Washington-based Council on American-Islamic Relations, said such comments are part of "a very disturbing trend" of bigotry.

“Now we’ve got people saying everybody who works at the 7-Eleven who has a swarthy complexion is a potential threat,” he said.

And now, Myrick is insisting that "CAIR [is] trying to infiltrate the offices of members of Congress by placing interns in the offices."  Infiltrate -- she's talking about American citizens.  The U.S. Congress and the country belong to CAIR members every bit as much as they belong to Myrick and her constituents.  CAIR is going to impose Sharia law on the U.S. by activating its sleeper-interns on Congressional Committees.  It's really hard to overstate how repugnant so many of the people in Congress are.