A nation of attention whores

Balloon boy's bizarre dad. Meghan McCain's tweeted cleavage. The Gosselins. Why is everyone so starved for fame? 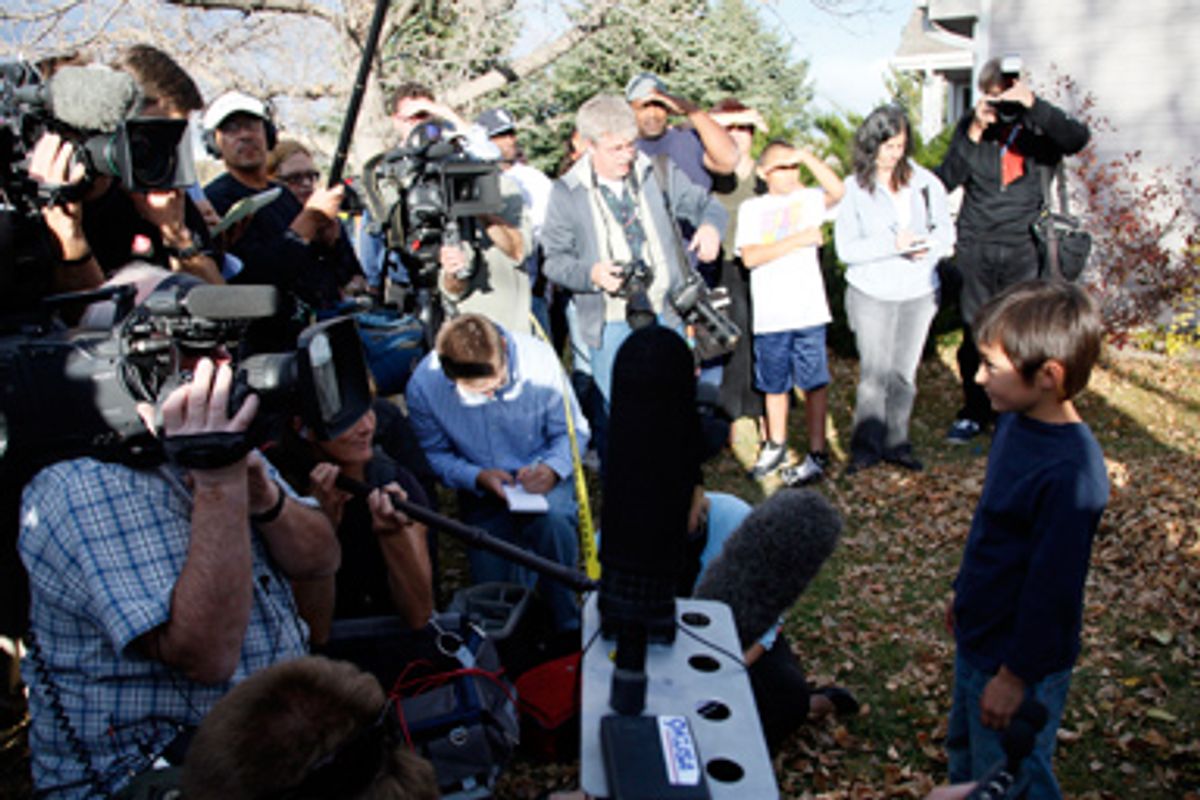 Six-year-old Falcon Heene is surrounded by reporters on the lawn of his house in Fort Collins, Colorado October 15, 2009.
--

On last night’s season premiere of "30 Rock," a character uttered the soon-to-be immortal phrase “drunk on attention.” If indeed we can consider attention an intoxicant, we are right now in the midst of the mother of all spring breaks.

In the last day alone, Meghan McCain flaunted her cleavage and Jon Gosselin was sued by TLC for breach of contract for his downright promiscuous media appearances. But most notably, the son of a former "Wife Swap" contestant went missing, bumped virtually every other news story out of the headlines, turned up in his attic, and then said on CNN that he “did it for the show.”

How did we become so desperate? How did we reach a point where Paris Hilton’s mid-decade heyday suddenly seems like a golden age of reserve? While I admit a fondness for Roxie Hart’s theory in the musical "Chicago" that “none of us got enough love in our childhood,” surely there’s more to it than that.

More than ever in history, a measure of fame appears tantalizingly within the grasp of almost anybody. Sing the right song on "Idol," create a funny enough blog, and a few glorious sprinkles of stardust can fall on your humble shoulders, too. And if regular people can even momentarily become famous, then famous people have to work that much harder for our affection. “Real” housewives have just as much of a fan base as “Desperate” ones. Having a glut of celebrities and aspiring regular people alike vying for our attention, along with the field-leveling power of social networking, means increasingly desperate publicity stunts, not to mention the existence of the phrase “Tom DeLay, 'Dancing with the Stars' contestant.”

The euphoria from putting on a performance and getting a response – whether it’s a Facebook status update or a "gotcha!" balloon chase -- is heady and wildly infectious, to be sure. But attention doesn’t just represent the filling of a hole in our love-starved hearts. It’s money. The recession is not going away anytime soon. Unemployment is epidemic. Once-venerable industries are folding faster than a roomful of origami experts. And even those who have managed this year to hang on to a job are facing pay cuts, wage freezes and enforced leaves of absence.

So that wild drive for a little bit of public validation isn’t just emotional. Whether you’re a movie star or a CEO or Joe the plumber, very few of us right now are in the luxurious position of not feeling the economic screws tightening all around us.

Both Gosselins are stay-at-home parents whose income the last few years has come solely from their name. Balloon boy Falcon Heene’s dad Richard lists his occupation as a storm chaser and science detective, neither of which is known for generous compensation. Susan Boyle was unemployed when she appeared on "Britain’s Got Talent." The scramble for work, especially among people who either work in the media or fancy that they could, is relentless.

It’s easy to believe -- misguidedly, perhaps unconsciously but nevertheless resolutely, that getting enough hits on YouTube or followers on Twitter or the biggest brass ring of all – a shot at reality TV! – could lead to something lucrative. After all, it works for some people – people who appear to have remarkably few redeeming qualities. And if your house is in foreclosure and your company just downsized, fame not only looks slightly better than bank robbery and amateur porn, but it also seems weirdly attainable. It’s the crazy, frequently delusional and often downright dangerous dream of easy, big money. It’s a lottery ticket.

The average person’s chances of winning the lottery, by the way, are about one in 20 million. And in the meantime, 6-year-old Falcon Heene, whose dad went into defensive overdrive on CNN over what his son meant by saying he “did it for the show,” vomited twice on national television this morning when confronted with the same question.

We may never truly know what happened to the boy yesterday, why he spent hours hiding in a box, and what he meant when he said it was for show. But his instincts suggest the kid’s on to something. Yesterday’s relentless, round-the-clock odyssey – with reporters dashing for exclusives, pundits typing as fast as they could to get their editorials up, talk-show hosts racing to write jokes, and regular folks furiously posting their own musical tributes represented a moment not just when one little boy had a moment of fame, but the rest of the world raced to jump into his briefly shining spotlight. Because we want to. Because we need to. And the thing about getting drunk on attention is that it’s often enough to make you throw up.