Where the wild things aren't 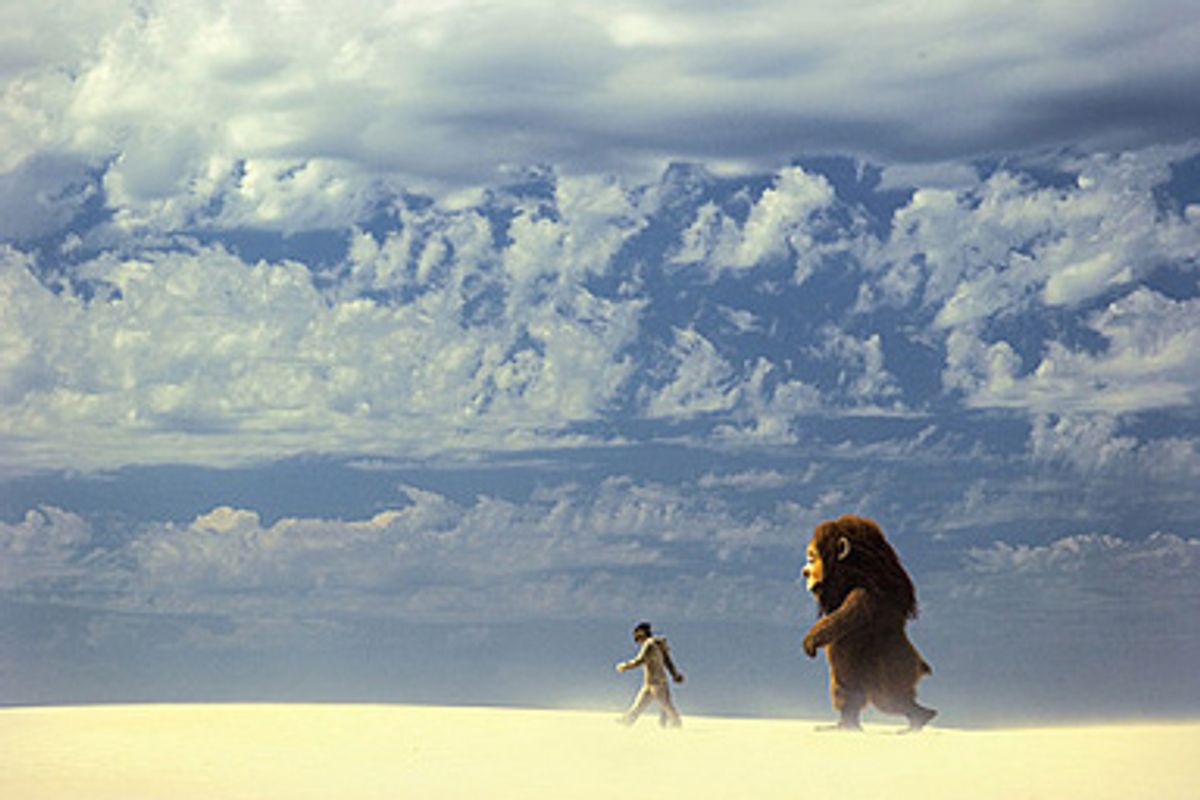 A still from "Where The Wild Things Are"
--

There has been a great deal of chatter, on the Web and elsewhere, about the target audience for Spike Jonze's elaborate adaptation of Maurice Sendak's "Where the Wild Things Are," a book that has been loved to dog-eared tatters by many, many children since its publication in 1963. Is Jonze's movie for people who currently happen to be children, or for people who used to be children? And if it's chiefly for the latter -- as Jonze himself pretty much confirmed in a recent New York Times Magazine profile -- the next question might be, Is it OK for kids, or is it too scary?

If your kids get all wide-eyed at the prospect of listening to grown-ups' self-absorbed reflections on the fears, anxieties and frustrations of childhood, or if they've ever clambered onto your lap and begged for a civics lesson on the dangers of totalitarianism, then by all means run, don't walk, to Fandango and get your tickets for "Where the Wild Things Are."

In that Times Magazine profile, Jonze -- who co-wrote the movie with Dave Eggers -- said, "Everything we did, all the decisions that we made, were to try to capture the feeling of what it is to be 9." That should set off the warning bells. And sure enough, "Where the Wild Things Are" is filled with the aggressively childlike sense of wonder that only adults can feel. As Annie Dillard wrote, "Young children have no sense of wonder. They bewilder well, but few things surprise them. All of it is new to young children, after all, and equally gratuitous."

In other words, children may be too sophisticated -- too busy being actual children -- for "Where the Wild Things Are." This isn't a straight adaptation of Sendak's book, which would be impossible, given that it consists of 10 sentences of text. Instead, Jonze uses the source material as a springboard to explore the insecurities and the freeing pleasures of being a child. As the movie opens, young Max (played by serene-looking child actor Max Records), dressed in a furry monster jumpsuit, chases the family dog with a fork. Shortly thereafter, we see that he's a confused, lonely child who talks to fences. He's enormously proud of the igloo he's built in the family's snowy yard -- then his sister (Pepita Emmerichs) and her friends destroy it in what starts out as a good-natured snowball fight. Jonze clues us in, subtly, that Max's parents are divorced; his mother (Catherine Keener) appears to be dating someone she likes (played by Mark Ruffalo, in a blink-and-you'll-miss-it performance). Max sees them snuggling on the couch, and shortly thereafter acts out when she starts to get his supper ready. He stands on the table in his sneakered feet and roars, "Woman, feed me!" an open acknowledgment of the savagery of children, and the ways in which they're aware of gender roles even before they really know what the heck gender is.

Then Max bites his mother, and she screams at him. He runs from the house, fast and far in the darkness, leaving the best part of the movie -- a framing device that actually does get at some of the simmering anger of childhood -- behind him. He finds a boat and sets sail into the night, eventually reaching a forest where he comes upon a group of shaggy, mammothy creatures lumbering about, arguing and destroying stuff.

Max persuades these curious beasts that he's a king with special powers. And then he gets to know them, even though their personalities seem somewhat interchangeable. There's the devoted, kvetching couple, Ira and Judith (Catherine O'Hara and Forest Whitaker); KW (Lauren Ambrose), the girl-beast who has committed heresy by going outside this tight-knit circle to make friends with some owls (whom she at one point stones, playfully, on a beach, explaining that they like it). Other gruff fuzzy-wuzzies speak with the voices of Paul Dano and Chris Cooper. But the wild thing to whom Max becomes closest is Carol (James Gandolfini), a shy, bright, idealistic behemoth given to confused, jealous tantrums.

These are all somber, sensitive creatures, with low self-esteem and low expectations -- EMOnsters, perhaps. Max develops a half-warm, half-uneasy relationship with them (they occasionally hint that under normal circumstances, they'd have long ago eaten him), and he suggests that together they build their own Utopia, and if anyone they don't like dares to enter, he or she will have his or her brain cut out automatically.

At this point you may be wondering how Sendak's compact, joyously freeing and slightly scary tale gave birth to such a wriggly nonstory, and it's a valid question. This is Jonze's first picture since his pretentious and self-indulgent meta-movie "Adaptation," and only his third altogether. (The first was the intriguing but not necessarily deep "Being John Malkovich.") Warner Bros., the studio behind "Where the Wild Things Are," was reportedly unhappy with the results of an early test screening, in which some of the little tykes in the audience cried and begged to be removed from the theater.

That right there is enough to make me urge any filmmaker to stick to his vision. It isn't, unfortunately, enough to make me like his movie. "Where the Wild Things Are" may be a childlike picture, but it isn't an innocent one. The movie is so loaded with adult ideas about childhood -- as opposed to things that might delight or engage an actual child -- that it comes off as a calculated, petulant shout, the kind of trick kids play to guilt-trip their parents into paying attention to them. It appears to be a movie made by, and for, members of a generation who feel it's unfair to have to grow up. Jonze isn't channeling the feelings of 9-year-olds so much as he's obsessively fingering his own, like the silky edge of a blanket. "Who cares about the children?" is Jonze's sulky rhetorical question. "What about me?"

That would be OK, if "Where the Wild Things Are" had any dramatic momentum, or any real emotional core. Often, the best movies are deeply personal for the people who've made them. But there's a difference between a personal work and one that stammers and shuffles and looks down at its shoes, now and then making a muttering, sideways observation about the tragedy of childhood. Jonze tries to give the movie a bigger social context -- characters utter deep truths about rulers not being able to keep all the people happy all of the time -- but mostly, his vision is just a jumble. He and Eggers have etched out a story that's probably supposed to be charmingly primitive but is mostly just tedious. If this were a storybook and not a movie, one page might read "And then they all ran through the forest, hooting and hollering," followed by another that reads "And then they all ran to the cliff by the sea, hooting and hollering," followed by the slightly more exciting "And then they all threw dirt clods at one another, hooting and hollering." The hooting and hollering is aided and abetted by rambunctious, raucous little songs by New York's downtown darling Karen O. of the Yeah Yeah Yeahs; the quieter moments get introspective, ghostly melodies by Carter Burwell. But Jonze is too obviously using the music to alternately rev us up and slow us down, instead of letting the movie's images, and its action, set the pace.

There's no doubt about the grand ambitions of "Where the Wild Things Are." The production design (by K.K. Barrett), the cinematography (by Lance Acord) and the creatures (made by the Jim Henson Co.) succeed, to a degree, in evoking the glorious, scritchy-scratchy crosshatching of Sendak's illustrations. But these costly beasties and expensive special effects are too often put to ill use, in scenes that are pointless or simply boring: At one point Carol and Max wander through a desert, having an existential conversation about whether or not the sun might someday die. Why not just borrow an outtake from Gus Van Sant's "Gerry" and be done with it?

Jonze grasps at many wispy truths in "Where the Wild Things Are": Families are, to an extent, dictatorships, and that's just the way it is. No one can be responsible for making everyone happy. It's frustrating to be a kid, which is why kids need to run and yell and get their ya-yas out. But Jonze's ideas, visual and otherwise, spill out in a faux-philosophical ramble that isn't nearly as deep as he thinks it is; at best, it's a scrambled tone poem. Even the look of the picture becomes tiresome after a while -- it starts to seem depressive and shaggy and tired, as if Sid and Marty Krofft had forgotten to take their meds. Jonze has said that he was thinking of Cassavetes movies as he wrote the dialogue for "Where the Wild Things Are." A child is waiting, and he wants his money back.

Movies Where The Wild Things Are