The British are poised to reveal the brutal torture to which Binyam Mohamed was subjected.

There is a vital development -- a new ruling from the British High Court -- in a story about which I've written many times before:  the extraordinary joint British/U.S. effort to cover up the brutal torture which Binyam Mohamed suffered at the hands of the CIA while in Pakistan and while he was "rendered" by the U.S. to various countries.  While Mohamed, a British resident, was in American custody, the CIA told British intelligence agents exactly what was done to him, and those British agents recorded what they were told in various memos.  Last year, the British High Court ruled that Mohamed -- who was then at Guantanamo -- had the right to obtain those documents from the British intelligence service in order to prove that statements he made to the CIA were the by-product of coercion.

The High Court's original ruling in Mohamed's favor contained seven paragraphs which described the torture to which Mohamed was subjected.  It has been previously reported that those paragraphs contain descriptions of abuse so brutal that not even our own American media could dispute that it constitutes "torture":

The 25 lines edited out of the court papers contained details of how Mr Mohamed's genitals were sliced with a scalpel and other torture methods so extreme that waterboarding, the controversial technique of simulated drowning, "is very far down the list of things they did," the official said.

But before the decision was released, the Court decided to redact those seven paragraphs.  And in February, 2009, it issued a new ruling explaining its reason to conceal those paragraphs:  the Bush administration had issued what the Court called a "threat" that the U.S. would reduce or even eliminate intelligence-sharing with the British if those paragraphs were made public.  In other words, British officials needed a reason to tell the High Court that British national security would be jeopardized if those paragraphs were made public, and Bush officials obliged by threatening that the U.S. would withhold information about terrorist plots aimed at British citizens in the future if this information were disclosed.  As the High Court summarized in its new ruling issued yesterday (click images to enlarge):

In that February ruling, the High Court issued an angry denunciation of the U.S. for issuing these threats, but nonetheless concluded that the danger to British citizens compelled the Court to keep those paragraphs concealed:

Throughout 2009, Mohamed's lawyers, as well as various international newspapers, repeatedly petitioned the British High Court to re-visit its decision on the ground that the Obama administration had replaced the Bush administration, and surely the anti-torture Obama would never embrace or maintain the same threat.  But, obviously in conjunction with British officials, the Obama administration took numerous steps to convey to the British High Court that they were indeed re-iterating the same Bush threats, including:

(1) a February, 2009 statement issued by Obama's National Security Council praising the concealment of these paragraphs and pointedly noting that the decision "preserve[s] the longstanding relationship" between the U.S. and Britain;

(2) a May, 2009 letter from the CIA emphasizing that disclosure of those paragraphs "reasonably could be expected to cause serious damage to the United Kingdom's national security" and warning that in the event of disclosure:  "we will have to review with the greatest care" information provided to Britain in the future (see British High Court ruling, paragraphs 48-49, 69 and 79);

(3) a June, 2009 letter from Obama's National Security Advisor Jim Jones -- in response to questions from the High Court as to whether the CIA's threats represented the view of Obama -- "emphatically affirming" that the CIA's letter "indeed speaks on behalf of the United States government" (see British High Court ruling, paragraph 79 and 87); and,

(4) according to the British Foreign Secretary in July, Hillary Clinton "personally intervened to suppress evidence of CIA collusion in the torture" by re-iterating the threats first made by the Bush administration that intelligence-sharing might be in jeopardy if those paragraphs were made public (see British High Court ruling, paragraph 42 and 83-84).

Until yesterday, all of that caused the British High Court to continue to conceal those paragraphs based on the insistence from the British Foreign Minister that the Obama administration was re-iterating the same threats made by the Bush administration.  Yesterday, in a 38-page decision (.pdf), the Court reversed itself, and ruled that these paragraphs detailing Mohamed's torture should be publicly disclosed.  It did so by making clear that, in essence, it simply did not believe that the U.S. would meaningfully reduce intelligence sharing; understood the Obama statements to be made at the request of British officials as a meaning of justifying ongoing concealment; interpreted the Obama administration to say only that disclosure "could" lead to reductions in intelligence-sharing, not that it "would"; and, most of all, that there are vital public interests that outweigh the minimal risk that the U.S. would withhold evidence of a terrorist plot from Britain as punishment for disclosure: 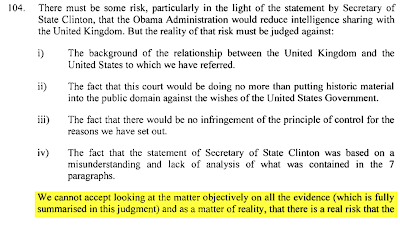 The Court, using very revealing rationale, also rejected the British Government's suggestion that it ought to leave the decision to American courts:

As a result, the British High Court -- pending the results of one final appeal -- will release to the world those seven paragraphs, detailing what the CIA itself told British intelligence agents was done to Binyam Mohamed.

All of this highlights two vital points:  (1) the extent to which the Obama administration has been willing to go to cover up evidence of the Bush administration's torture regime; when I interviewed Mohamed's lawyer, Clive Stafford Smith, in April, he made clear that these threats were part of a joint cover-up between the U.S. and Britain; and (2) the way in which American citizens are forced to rely on the institutions in foreign countries -- British courts and Spanish prosecutors -- to learn about what our own government has done.  War crimes can never stay hidden for long.  It's only a matter of time before all of this evidence comes out one way or the other, and when it does, those who worked so vigorously to keep it concealed will be rightly judged to have been complicit in its cover-up.

UPDATE:  Today's Guardian calls the Court's ruling "a devastating judgment," reporting that the "judges roundly dismissed the foreign secretary's claims that disclosing the evidence would harm national security and threaten the UK's vital intelligence-sharing arrangements with the US."  The article also notes that the Court simply did not believe that the Obama administration would follow through on these threats, but instead issued them only at the behest of British officials, who needed a pretext for ongoing concealment.

UPDATE II:  The Obama administration, The Most Transparent Ever, condemns the British court decision to reveal what was done to Mohamed:

Meanwhile, US State Department spokesman Ian Kelly said: "We are not pleased", adding that Washington kept such information confidential "to protect our own citizens".

By contrast, Mohamed and his human rights lawyer praised the decision in the name of transparency:

[Mohamed] himself says it is of vital importance that the material is released to back up his claims of having suffered "medieval" torture.

"The public needs to know what their government has been up to for the last seven years," Mohamed told the BBC. . . .

"The judges have made clear what we have said all along -- it is irrational to pretend that evidence of torture should be classified as a threat to national security," he said.

"All along, the government has been trying to conflate national security with national embarrassment, nothing more, nothing less."

The Obama administration is not only trying to block evidence of what was done to Mohamed from being disclosed in this British court proceeding, but also in America's judicial system, where it has repeatedly asserted the "state secret privilege" to demand dismissal of Mohamed's lawsuit, which seeks to recover damages for his rendition and torture.  They're doing that because they're The Most Transparent Administration Ever -- obviously.