The Nobel Prize, with an asterisk

It's not that strange to get an "aspirational" peace prize, but now the president has to earn it 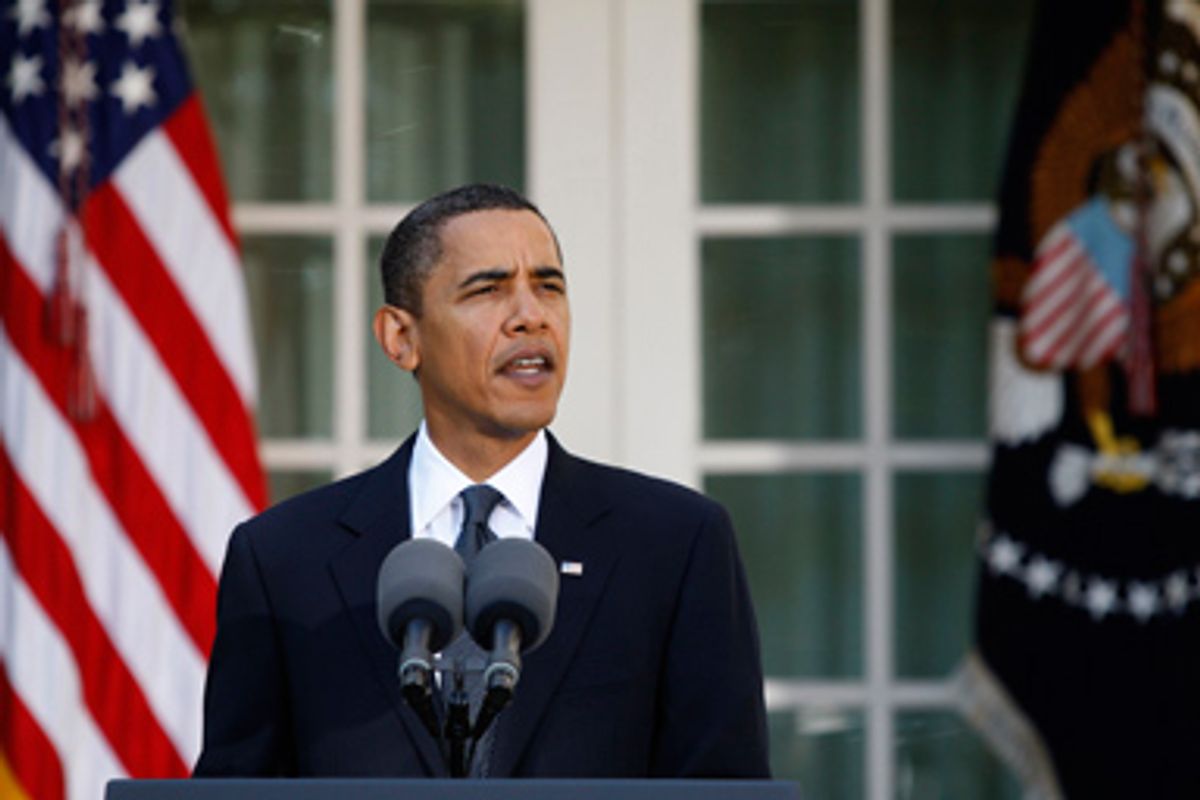 U.S. President Barack Obama comments on winning the 2009 Nobel Peace Prize while delivering a statement in the Rose Garden of the White House in Washington, October 9, 2009.
--

Despite the graciousness of his speech at the White House last Friday, President Barack Obama's acceptance of the Nobel Peace Prize did have an air slightly reminiscent of Abe Lincoln's story about the man who was tarred, feathered and ridden out of town on a rail -- if it weren't for the honor of the thing, he'd just as soon walk.

Inger-Marie Ytterhorn, a member of the Nobel committee that chose him, told the Associated Press this week, "I looked at his face when he was on TV, and confirmed that he would receive the prize and would come to Norway, and he didn't look particularly happy."

After all, Obama has been president for barely nine months and, yes, he has made some fine speeches in support of peace and bettering international relations. But was that enough to merit the award? Was he winning it more for who he's not -- George W. Bush -- than for who he is?

Sadly, much of the initial reaction in the United States was churlish and scornful, ill-informed and frankly, as un-American as that of the knee-jerk right who cheered when Obama's quick trip to Copenhagen failed to win the Olympics for his Chicago hometown. We are less serious as a nation than we should be. The empty-headedness and inanity of much of the media and the political response to the announcement bears testament to that unhappy truth. We would do better to see ourselves as others see us than to scream in protest and sarcasm when another part of the world wishes to honor our president and us.

But some of us sincerely felt that it may have been better for the president and the country not to have accepted the Nobel -- to have made a gracious speech of thanks but no thanks -- regretfully declining the award until he had proved himself worthy through actual deeds and positive signs of progress. If nothing else, it would have silenced at least some of the critics and given Obama some breathing room to do what he says he wants to do without the constraints of even greater global expectations.

Take a look at the world around us, and America's place in it. Obama talks the talk when it comes to addressing climate change and nuclear arms control, curbing the atomic ambitions of Iran and North Korea, encouraging both harmony and diversity among the religions of the world. All well and good; even exemplary.

But little concrete action has been taken. For all the talk of closing our prison in Guantánamo, chances are that he will not meet his deadline of shutting it down within a year. Many of the transgressions on human rights that took place there and elsewhere in the name of a global war on terror continue, unresolved and unpunished.

He has spoken out for a two-state solution for Israelis and Palestinians but has made no progress, the window of opportunity having been slammed down on his fingers by Israel, with no help from Hamas. Our troops are still in Iraq, despite promises of significant withdrawals, and the Nobel announcement came in the midst of deciding whether or not to send even more American men and women into Afghanistan, where many of them may die. When told about Obama's new honor, an Afghan bank worker said to a reporter from the Los Angeles Times, "I'm not sure I understand. This isn't for peace here, is it? Because we haven't got any."

Better then to call this prize, as the Nobel committee and many others have done, an aspirational award -- the committee expressing its own audacity of hope. As the president himself said, "I know that throughout history, the Nobel Peace Prize has not just been used to honor specific achievement; it's also been used as a means to give momentum to a set of causes."

According to an article by the political scientist Ronald Krebs in an upcoming issue of Political Science Quarterly, since 1971, the Peace Prize has been presented as just such an aspirational incentive 27 times. So the president is not alone. The head of the Nobel committee told reporters, "We do hope this can contribute a little bit to what he is trying to do."

Consider the prize encouragement, a vote of support for vision and inspiration, a recognition that after eight years of a unilateral, destabilizing imposition of American exceptionalism on the world, there's an attitude adjustment working its way through our foreign policy. Dignity is part of it. So is humility -- listening to other nations instead of ordering them around with the bluster of a swaggering county sheriff.

The potential is there. Whether Barack Obama can overcome or solve the dilemmas he inherited -- or the crises created on his own watch by his own hand -- will be proof of whether good intentions can become reality or simply pave that infamous road to hell.

In 1961, another young president, John F. Kennedy, met with Soviet Premier Nikita Khrushchev at a summit conference in Vienna, Austria. It was a time when Cold War tensions between the two countries were high, just weeks after the failed U.S.-backed invasion of Cuba at the Bay of Pigs. Kennedy pointed to one of the medals on Khrushchev's lapel and asked what it was. The Lenin Peace Prize, said Khrushchev. Kennedy replied, "I hope you keep it."

Now Obama has received the Nobel Prize for Peace. The months and years ahead will determine whether he deserves to keep it.