Whose isn't? On "The Good Wife" and "Dexter," rotten betrothals make for great drama 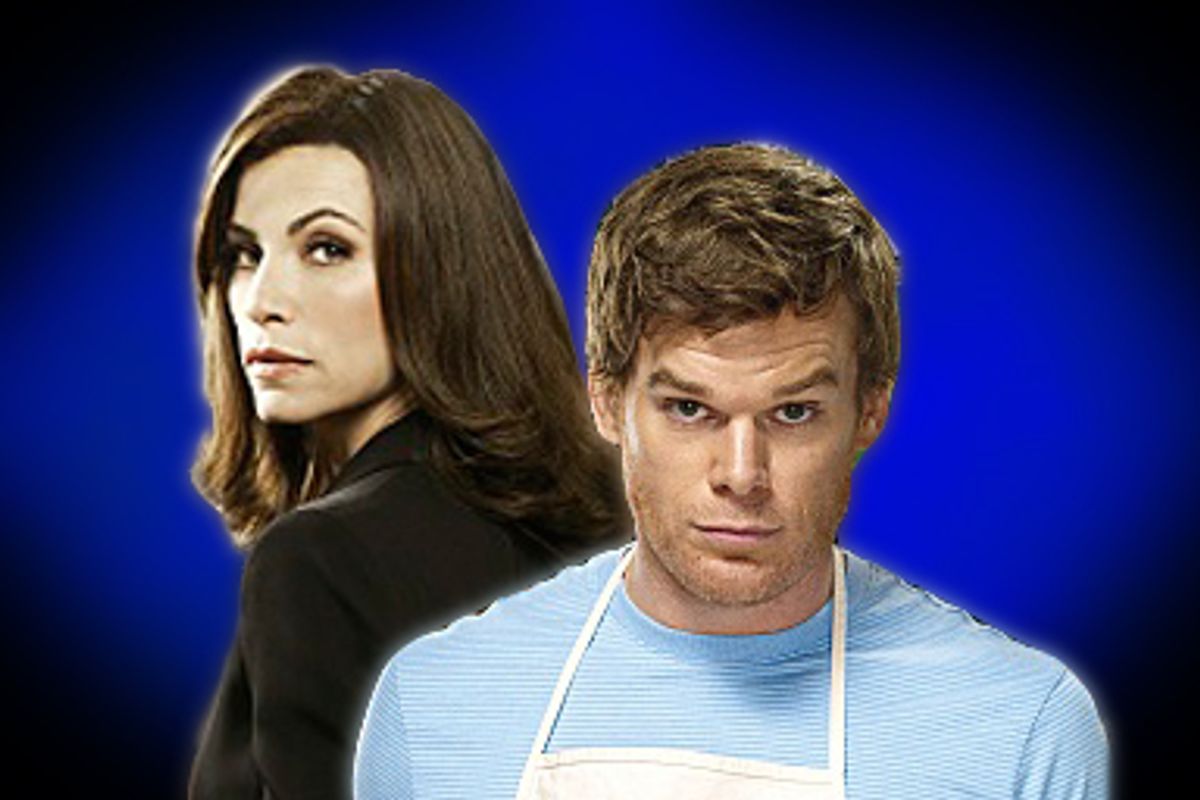 Marriage is like an inflamed bunion. It requires a lot of care and attention, but all it does is make you itch and wince in return. You can never get away from it, but you can't touch it as often as you want to, either. You're not supposed to ignore it, but if you look too closely at it, it'll only make you nervous.

The pain and the inflammation might be uncomfortable, but that's what tells you it's healing! Either that, or a deadly infection is coursing throughout your entire body, poised and ready to kill you.

If being a good spouse is tough under normal circumstances, how do you continue to show your loyalty and support when you've been publicly humiliated and betrayed? That's the question Alicia Florrick (Julianna Margulies) of "The Good Wife" (10 p.m. Tuesdays on CBS) finds herself asking in the wake of her husband's political scandal. Peter (Chris Noth) was an Illinois state's attorney with a secret taste for girls on the side (but don't you sort of expect as much when you marry Mr. Big?) who left his wife and two teenage kids reeling when he was arrested and sent to jail on corruption charges. Alicia was taken by surprise, but she stood by Peter's side, looking resolute, as he announced his resignation from office. Margulies is very good at looking resolute, which makes this picture, repeated so often in recent years, worthwhile in spite of its redundancy.

But will Alicia's story reflect the typical media trajectory? The press usually starts out by portraying the wives of womanizing politicians as victims (Elizabeth Edwards during her baby-gate book tour), then they end up sniffing around for her tragic flaws (Hillary Clinton when the Lewinsky scandal was going down). Finally, the rabble joins in, pestering and shaming these women until divorce looks like the only possible way to save face.

It's no wonder that ultimately, most of us have a lot of sympathy for the loyal, scorned wife. She's the ultimate underdog – a woman who bought into the dream of happily ever after with a charmer of a man, only to find herself confronted with a very different picture, all while the world points and jeers.

Even so, "The Good Wife" isn't as melodramatic as you might guess. This is the kind of story that might feature lots of teary-eyed visits to the prison, shouted accusations, and layers upon layers of ugliness unveiled. Instead, "The Good Wife" focuses closely on Alicia's attempts to build a life for herself and her children and to sally forth with dignity despite the sounds of snickering wherever she goes.

Alicia is forced to take an entry-level law position at the firm of an old friend, a great narrative choice that demonstrates just how dramatic it is to find yourself starting over at middle-age – and a great way to remind us what a big decline in status this woman has endured. On a less nuanced drama Alicia would've founded a law firm singlehandedly, or become an immediate star and senior partner at an established firm. Instead, Alicia is competing for a job with Cary (Matt Czuchry) a 20-something guy who's single, has no kids, and is willing to work 60-hour weeks to win the position.

Cary is also willing to bend the truth in order to make himself look good, of course, contrasting nicely with Alicia's quiet dignity and stubborn adherence to principle. And who better than witty, demonic Christine Baranski to play Alicia's foe at the firm, with Will (Josh Charles of "Sports Night") as her old friend and advocate?

"The Good Wife" proves itself much richer than a typical law procedural, thanks to the richness of its premise and the quality of storytelling demonstrated in the first four episodes. Each week the show is both intriguing and satisfying, as we watch Alicia piece together little victories while comforting her kids and confronting lurking demons from her old life. Despite the usual familiar courtroom shenanigans, the show's full, multilayered episodes keep us interested.

Seeing Margulies in this role reminds me of her great performance in the premiere episode of "ER," where Nurse Hathaway returned to her job in the wake of her suicide attempt. Margulies has a real knack for embodying this sort of down-but-not-out, straightforward self-possession. Something in her self-restraint and her quiet anger makes us want her to win.

The scenes with Noth, though infrequent, are particularly powerful. Instead of shouting, Alicia generally plays along with Peter's delusions but draws the line when he tells her that everything might soon go back to the way it was. Alicia needs for him to understand that this is wishful thinking, that nothing will ever be the same. In last week's episode, the extreme disconnect in perception between Alicia and her husband became even clearer during a particularly tense visit:

Peter: Are you having fun? That's the most important thing.

Peter: Well, I'm glad you're making a life for yourself. It gives you a break from this whole … situation.

Noth is the perfect actor to deliver such an arrogant line, as if Alicia's career and struggle to raise her kids by herself is just an amusing diversion from the nightmare that he created. Just as Alicia looks ready to set him straight with a few sharp words, his lawyer interrupts – he's been sitting a few feet away the whole time, which explains the polite smiles Alicia uses to mask her rage.

But even when they're alone on the phone, Peter and Alicia have trouble connecting. Neither of them really knows how to feel, what to say, or whether they'll be together once the dust settles.

The tension of an unresolved shattering of a marriage – it's a nice energy to build a show around. And after four episodes, it's clear that the show's creators, husband-and-wife team Robert and Michelle King, want to tell a subtle, thoughtful story. "The Good Wife" is worth tracking for this reason alone.

After all, if marriage is an inflamed bunion, then a marriage damaged by a political scandal is a gangrenous limb. Will Alicia stand by her man, or will she resort to the emergency amputation of a high-profile divorce? Stay tuned to find out!

'Til death do us part
But what if you have to live a double life and cover your tracks, because your spouse would dump you in a heartbeat if she knew who you really were?

This is Dexter Morgan's dilemma in the fourth season of Showtime's "Dexter" (10 p.m. Sundays). Having married his longtime sweetheart Rita at the end of last season, Dexter must come to terms with a whole new life trying to balance the demands of marriage and family against a busy job and the hectic extracurricular schedule of a serial killer.

Naturally, Dexter is finding it more than a little challenging to wake up at night with his new baby, answer the demands of his new wife, and serve as a reasonably decent stepfather to his two older children while holding down his job as a blood splatter analyst for the Miami Police Department. Earlier this season, Dexter's precarious homicidal apple cart was toppled when he fell asleep on the way home from killing a bad, bad man and crashed his car. He suffered a concussion in the crash, and at first he couldn’t remember where he hid the body. Did it topple out of the trunk of his car? Was he going to be dragged off to jail at any minute? It's easy to see why so few serial killers successfully raise families of their own.

Well, the fact that they're homicidal lunatics probably has something to do with it, too. But then, this is the beauty – or the ugliness? – of "Dexter": After a while, you start to forget that the lead character is even a bad guy – most of the time, anyway.

That's because, aside from his unfortunate habit of murdering murderers, Dexter is just like many of us on a bad day: He feels alienated at work functions and neighborhood barbecues. The whole concept of marriage and family sends a shiver down his spine. The values that lend other people's lives meaning just confuse and embarrass him.

"The danger of community is that the people who don't belong are looked upon with suspicion," Dexter tells us in a voiceover, as he surveys a backyard cookout with a grim look on his face. "Those of us who prefer to work by ourselves, the lone wolves, risk being singled out. So I become an expert at blending in, camouflaging myself, becoming one of the guys."

Watching Dexter endure the bubbly, enforced cheer of family life may make this the best season of the drama series to date. Who wouldn't feel a little crazy when his wife is driving him to work, singing "Karma Chameleon" to the baby at the top of her lungs?

This season, the absurd pressures of building a stable life with another person are at the forefront of the picture for Dexter's sister, Deb, too. She's feeling a little less enthusiastic about her live-in boyfriend Anton since her older ex, retired FBI agent Frank Lundy, came back to Miami to investigate some suspicious homicides in the area on his own time. Lundy is a lot like Dexter, unable to relax or connect with regular people and obsessed with his work. In contrast, Anton is a little bit too relaxed – in one great scene, he sits around his and Deb's apartment, noodling away on an unplugged electric guitar, while Deb huffily makes coffee for both of them.

The commitment phobia came to a head in last week's episode, when Deb gave Dexter a ride home after work one night, and Dexter just stared at his house instead of getting out of the car.

Dexter: It's so crowded in there.

Deb: Well, I guess so. A wife and three kids.

Dexter: They're always there.

Deb: Tell me about it. It was easy living with Anton when he was never home. I'd come back to a quiet apartment and unwind without having to deal with anybody. Now, as soon as I walk through the door, he's there, waiting to engage.

It's true, Dexter. Being a good spouse (or even a bad one) takes far more energy than most of us can muster, as evidenced by the divorce rate in this country. But what can we do? We strive to be better for our better halves, if only to keep them from boarding that plane to Monte Carlo for one more day.