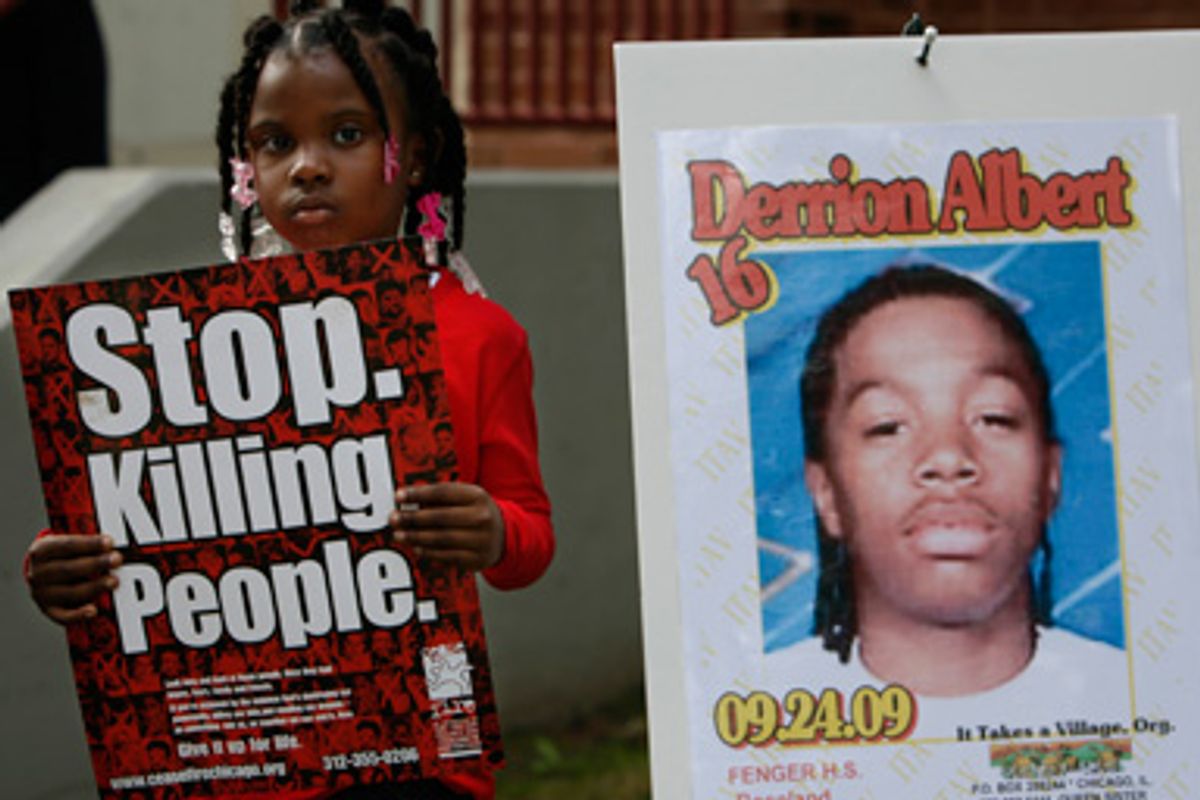 On Sept. 24, Derrion Albert, a 16-year-old junior at Chicago’s Christian Fenger Academy, was beaten to death in a brawl near the high school. A cellphone video of the killing found its way to the Internet and was aired on news broadcasts around the world. The scenes of violence in the streets of Chicago were partly blamed for the city’s elimination in the first round of voting for the Olympics.

The fight that killed Derrion began as a dispute between boys from the Ville, the neighborhood surrounding Fenger, and Altgeld Gardens, the housing project where President Obama worked as a community organizer in the mid-1980s. Traditionally, students from Altgeld attended Carver High School, a five- to 10-minute walk away. The school is now a military academy, which draws students from all over the city and the suburbs. To make room, students from Altgeld were shifted to Fenger. That decision was made by Arne Duncan, who was then CEO of Chicago Public Schools, and is now Obama’s secretary of education.

On Oct. 7, Duncan and U.S. Attorney General Eric Holder visited Chicago to discuss the killing and pledged $500,000 toward efforts to end youth violence at Fenger and its surrounding elementary schools. Parents at Altgeld Gardens want their children sent to Carver. On Tuesday, the Rev. Jesse Jackson rode a school bus to Fenger with students from Altgeld, promising to seek a meeting with Mayor Richard M. Daley, who has rejected the idea of reassigning students.

“The day that the city of Chicago decides to divide schools by gang territory, that’s the day we’ve given up the city,” Daley said.

The article below was written by a 17-year-old girl who lives in Altgeld Gardens and attends Fenger. She prefers to remain anonymous.

I’ve been going to Fenger for four years. I’m a senior. I think that this is the worst that it’s ever gotten. It’s different gangs from different territories: They got 11-9, which is on 119th Street. 12-Trey, which is 123rd. They got the Ville, 11-Trey Crazy, and they got the Gardens. Ever since I’ve been going there my freshman year, I’ve seen people get stabbed in the school, I’ve seen people get cut in the face with a razor blade. Last year, the police Maced the whole hallway during a big fight. When I was a sophomore, the night before prom, a boy got shot. He was playing Russian roulette at his house.

When she left, they made an announcement on the intercom. They said “Everybody be safe. Don’t take the 111th Street route to Michigan [Avenue].” When I left school later on that day, I talked to some of the guys, and they told me that somebody got hurt, and we didn’t know who it was. A text was sent out that somebody died. The next morning, that’s when we saw Derrion on the news.

When we returned to school, people were treating kids from the Gardens differently. I was hearing rumors that somebody was going to shoot out the bus. People don’t know I’m from the Gardens, but every time I tell them, they say, “Oh, no, she a snake. She a snake.” Because of everything that happened. They say it’s our fault that he died. How they treated me before, it was just cool, calm and collected.

Kids from Altgeld Gardens will be hollering in the hallway, “We want Carver. We want it now.” They’ll just be playing. But I think that kids from the Gardens should go to Carver High, because that’s our neighborhood school. When I was in eighth grade, they sent me a letter that said, “You’ve been accepted to your neighborhood school, Fenger.” I’m like, “How’s Fenger our neighborhood, when Carver’s in walking distance?” A fight is going to happen anywhere, but our neighborhood wouldn’t have been in this if we weren’t going to Fenger.

Since Derrion passed away, the school has felt like prison. We have no freedom. You have to get monitored when you go to the bathroom. The lady stays there and holds the door. They have people patting us down, on the chest and in between the cleavage when we go into school every day. Last year, when I was there, none of this was happening. We had cellphones. You can’t have cellphones anymore. They take them and they return them at the end of the day.

After the fight, everybody transferred their kids out of the school. Everybody. The majority of kids transferred out. I want to, but this is my senior year, and it will mess with my credits.

Even if they give the school $500,000, it’s not going to work. Kids are going to be kids. They are going to fight. They are going to argue. They can’t stop the kids from doing what they want to do. At the beginning of the year, they said they were going to transfer all the kids out that caused problems. But they aren’t doing anything about that. Nothing can stop violence. It’s going to happen.

I knew two of the kids that have been charged. They lived here in the Gardens. People say that they haven’t been into any violence. The Ville people was wrong for crossing the tracks. If the Garden people want to walk there, they should let ‘em. I walk from the school to Michigan every day, and I don’t have any problems. The kids from the Gardens crossed the tracks, and the kids from the Ville went after them. Also, if they go to Michigan, it’s one bus home.

Before this, we had to take two Chicago Transit Authority buses to get to school. It took 45 minutes to get to the school on the bus. Since the fight, the school has been sending buses to pick us up. It’s safer.

Mayor Daley is wrong when he says that sending kids from Altgeld to Carver will be letting the gangs decide school boundaries. I don’t like that man. That’s crazy. It isn’t any school boundaries. It’s safety. They’d better not give me no say so with him. I’ll tell him, “You don’t go to Fenger. You don’t know what’s going on. You’re putting Altgeld kids’ and innocent bystanders’ lives in danger by sending them to Fenger.”

Most of the kids at Fenger come from neighborhoods that are close by. The only out-of-area neighborhood is Altgeld. Ever since freshman year, every neighborhood has been getting into it with every neighborhood. Today at school, someone told me, “The Gardens dirty.” I responded in an angry manner, “The outside’s dirty. What place that you know isn’t dirty on the outside. When you walk in my house, it’s clean.”

Derrion's death has given Fenger a bad name. When I went to go fill out a job application at a restaurant, they looked at my application and they was like, “We’ll call you,” and when I went out the door, they threw it out. I heard them say, “Fenger’s ghetto.”

People aren’t gonna forget Derrion’s death. It’s going to make people change their minds about coming to Chicago. I think it had to do with Chicago not getting the Olympics. Derrion did not deserve what happened to him. My thoughts and prayers go out to his family. I hope these kids just come to their senses and realize they are killing our youth. This is our future.