I get my investment advice from Glenn Beck and G. Gordon Liddy

Want to make money off of right-wing paranoia? Try buying gold -- I did, and it worked 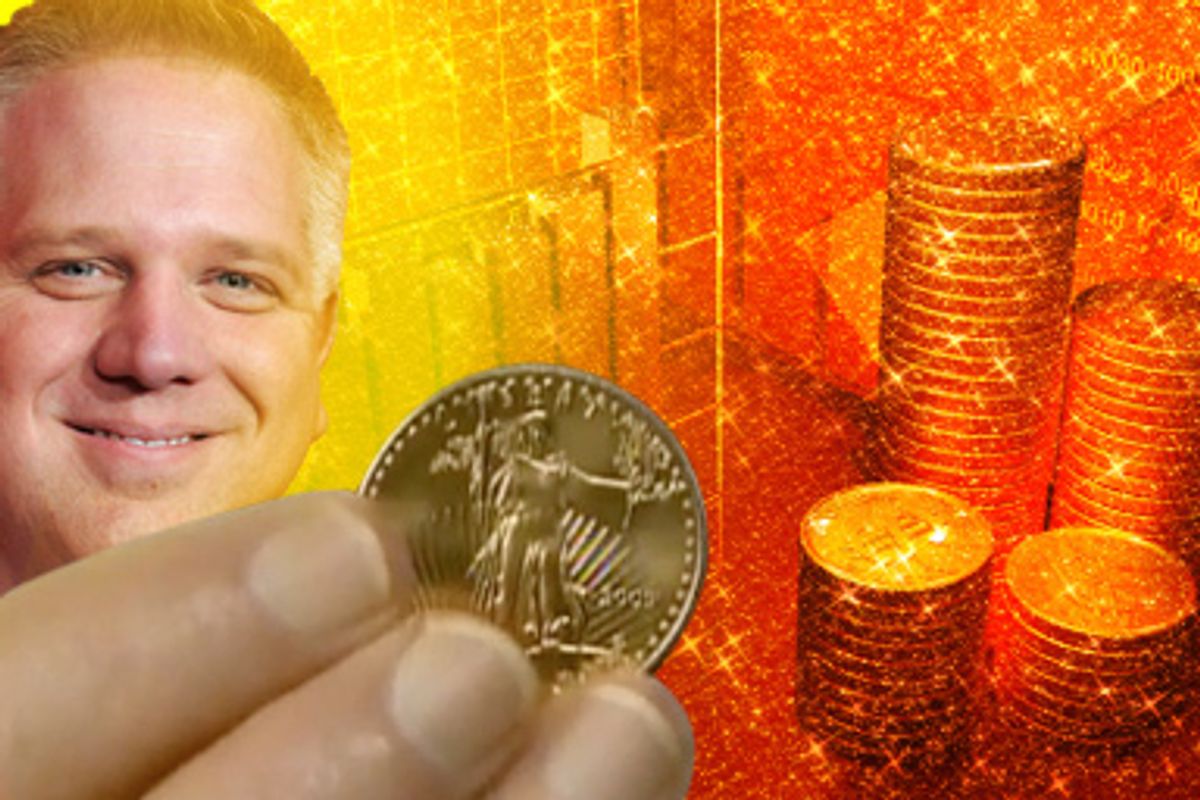 Forget Warren Buffet, Bill Gates and all those other self-made millionaires. My new financial gurus are Glenn Beck and G. Gordon Liddy -- and I'm a richer man for it.

For the last six weeks, I've been making money off of right-wing paranoia. All it takes is listening to Beck, Fox News' conspiracy king, and Liddy, who stars in an ad touting gold that runs several times during most of Beck's broadcasts. Late this summer, my former employer, the Gannett newspaper chain, wrote me a check for a small pension payout I had earned in seven years working there, which I rolled over into an IRA. Most of the money went straight into the boring, but responsible, funds you're supposed to invest in for the long term. I bought one composite fund designed for people, like me, in their early 30s, with retirement still decades off; I bought another that had been one of Fidelity's top performers even as the economy crashed.

But after following all the financially sound advice, I still had a little bit of cash left over, and I wasn't quite sure what to do with it. Until 5 p.m. rolled around one slow late August news day, and Beck's show came on the air. Advertisers have been fleeing Beck since the middle of the summer, when he called President Obama a racist; by the time Labor Day rolled around, the only ads running on his show represented the fringe. "Join our class-action lawsuit!" the advertisers implore. "Buy our natural 'male enhancement' pills! Subscribe to National Review!" And, over and over again, "Buy gold!" On any given show, three or four different gold merchants run ads. The weirdest, and most frequently aired, of the gold commercials goes a full minute, and it features G. Gordon Liddy. The spy-turned-convict-turned-conservative hero mocks the falling price of the dollar, then exhorts viewers to buy precious metals instead. "That's the sound of security," Liddy says. "That's the sound ... of gold!" Check the ad out here (story continues below):

It could also be the sound, I realized, of cash pouring into my retirement account. Beck's audience has been growing rapidly, despite -- or because of -- all the crazy things he says. More than 2 million people watch him daily -- which, in turn, means a lot of exposure for Liddy and his apocalyptic appeals to buy gold. If Beck's followers were devoted enough to mail tea bags to members of Congress on his orders, why wouldn't they be devoted enough to flee traditional investments for the "safety" of some shiny coins and bars? Gold  bugs have always been prominent among the paranoid end of the right wing, anyway; Obama's election, and the inevitable socialist revolution to follow, would have plenty of Fox News viewers frothing at the mouth about the inherent instability of the U.S. dollar, and the new administration's plans to sell out to the Bilderberg Group or something equally sinister, and the need to fall back on something more tangible, more ... golden in such troubled times.

So I bought some gold. The money I was investing, after all, had been sitting around on the books of a newspaper company; almost anything I did with it was likely to be a better bet than leaving it in Gannett's hands and waiting for some corporate honcho to raid the pension fund as the papers' circulation kept declining. If the price of gold tanked shortly after the purchase, I would just dump the shares quickly and buy something else, and 30 years later, when my wife and I actually needed the money to retire, we'd barely notice the difference. (Besides, strictly speaking, I didn't buy the stuff Liddy is hawking. I bought some of Fidelity's gold fund, which invests in gold mining companies, gold bullion, gold coins and companies that manufacture things like watches or jewelry that consume a lot of the metal.)

And it worked. Better than I'd expected. Since Sept. 1, my gold investment increased in value by 22 percent, crushing the broader market even as it charges ahead toward recovery. The S&P 500 index, for instance, has gained only about 9 percent in the same time; I was even better off buying gold than buying Google, which only gained 19.5 percent.

Beck himself may have helped my cause. Last week on his show, he interviewed Charles Goyette, a fellow conservative talk show host who's written a book, "The Dollar Meltdown," about "surviving the impending currency crisis with gold, oil and other unconventional investments." It must have been a happy day indeed in the Fox News sales department, as Beck pushed the same message as his most prominent advertisers do. "I have in my hand a gold coin," he said, holding something originally worth $20. "It's from 1870. And it's worth now $1,000 ... This is where Zimbabwe is now, where the money is inflated and it's almost worthless. It is where we're headed in only a matter of time ... Is it worth taking $1,000 and just buying this if you can only afford one? What should you do?" Not surprisingly, Goyette basically said yes, and a few minutes later, there was Liddy again, talking about how secure the stuff was. And the budget for my big retirement party, sometime in the early 2040s, got bumped up a bit.

The gold mania didn't actually start with the ad boycott. The market value of the commodity has been climbing steadily since Obama took office back in January, and it's now trading for around the highest prices it's seen in 10 years, a bit more than $1,000 an ounce. Even the mutual fund I bought is up nearly 42 percent since Jan. 1. But the boycott was what made me notice the appeals to buy gold, and it certainly can't hurt gold sales. The more trouble Fox has selling ads on Beck's increasingly popular program, the better Beck and Liddy look as financial advisors. That's because as more and more legitimate businesses have deserted Beck, the TV competition for Liddy and his fellow gold bugs has declined. The longer the ad boycott goes, the more often Beck's growing audience will hear about the benefits of buying gold.

Except I won't be making money off it anymore. With prices higher than they've been in years, and a healthy profit booked after only a month and a half, my gold run finally came to an end. I sold out, and put the money into another one of those boring, responsible index funds, just before I filed this piece. An investment strategy that depends on a bunch of angry Fox News viewers to succeed seems unsustainable in the long run. The economy is starting to show signs of recovery, and with each step away from the brink, those "unconventional" ideas that Beck's guest's book is touting are likelier to remind the financial world why they're considered unconventional to begin with. For the right investment idea, though, I could start taking financial cues from Beck's show again. When someone comes up with a czar fund, or finds a way to sell derivatives based on ACORN, let me know.

Want to try your hand at finance à la Fox News? Here are some other make-money-fast schemes Salon staffers devised to profit from right-wing paranoia. Remember, as with any investment, past performance does not guarantee future success.

Start your own gun show. Sure, maybe it's blood money. But you could clean up running guns right about now. Shortly after Obama was elected, there was a major spike in firearms sales. Apparently, the idea was to stock up before the Democratic police state confiscated them. The market is clearly telling us something -- the right wants guns, and it's willing to pay a premium to make sure it gets 'em before the government does. The beauty of a gun show, of course, is that most states allow people to buy weapons at a show without passing any background checks. So buy a few tents, call the local arms merchants and tell them your show is up and running -- and you'll only take a small percentage off the top for letting them sell there. It's a can't-miss moneymaker!

Supply the dropouts. The Obama-led socialist revolution may be unavoidable, but that doesn't mean it's inescapable. There will certainly be some Beck fans who decide to get off the grid and hunker down for the long haul. And someone's got to sell them canned food, kerosene, water purifiers and multi-tools. Why not you? Unfortunately, there's probably no easy entrée to this market via the stock exchange. Instead, you'll have to do it the old-fashioned way: fill up a moving van with some literally can't-live-without-this supplies and head to the quiet parts of Montana, Idaho and other states conservatives might think they can use as safe havens. Your customers are, by definition, suspicious types, so you may have to wait for them to approach you. Salon recommends a Confederate flag, a tea party-approved "Don't Tread on Me" decal or a bit of Birther gear, as a coded signal to attract like-minded clientele.

Flip that Maldives beach house! It's virtually gospel among some conservatives that climate change is a myth, a sham used to force a cap-and-trade system onto the U.S. economy in order to suffocate it. So here's your chance to make a quick buck in real estate. Island nations are likely to be the first ones submerged when -- as climate change scientists warn -- sea levels rise because of global warming. The Maldives recently held a cabinet meeting underwater, in order to call attention to the problem. But since Beck's audience doesn't believe any of that climate change stuff, they should be willing to pay inflated prices to put their vacation homes in the danger zone. Buy low, sell high -- it's the first rule in investing.

With additional reporting by Gabriel Winant.