A Rumsfeld-era reminder about what causes Terrorism

We can't combat Terrorism by sending our military into Muslim countries. Doing that only exacerbates the problem.

The debate over Afghanistan -- or, more accurately, the multi-pronged effort to pressure Obama into escalating -- is looking increasingly familiar, i.e., like the "debate" over Iraq.  The New York Times is publishing articles filled with quotes from anonymous war advocates.  Permanent war-justifier Michael O'Hanlon is regularly featured in "news accounts" as he all but blames Obama for increasing combat deaths due to his failure to escalate the moment the military demanded it.  The New Republic is churning out pro-war screeds.  Every option is on the proverbial table except one:  not fighting the war.  And there's a widening gap between (a) public opinion (which sees Afghanistan as "turning into another Vietnam" and which opposes more troops, with 49% favoring a full or partial withdrawal) and (b) the virtual unanimity of establishment punditry which, as always, is cheerleading for the war.  The only difference is that, with a Democratic President, there seems to be more Democratic and progressive support for this war (though there was, of course, plenty of that for Iraq, too).

The primary rationale for remaining -- and escalating -- in Afghanistan is the same all-purpose justification offered for virtually everything the U.S. has done since 2001:   Terrorism.  Apparently, the way to solve the Terrorist threat is by sending 60,000 more American troops into a Muslim country and committing to at least five more years of war there.  That, so the pro-escalation reasoning goes, will make us safer. 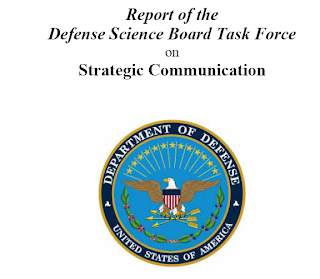 In 2004, Donald Rumsfeld directed the Defense Science Board Task Force to review the impact which the administration's policies -- specifically the wars in Iraq and Afghanistan -- were having on Terrorism and Islamic radicalism.   They issued a report in September, 2004 (.pdf) and it vigorously condemned the Bush/Cheney approach as entirely counter-productive, i.e., as worsening the Terrorist threat those policies purportedly sought to reduce.  It's well worth reviewing their analysis, as it has as much resonance now as it did then (h/t sysprog).

The Task Force began by noting what are the "underlying sources of threats to America's national security":  namely, the "negative attitudes" towards the U.S. in the Muslim world and "the conditions that create them" (click images to enlarge):

And what most exacerbates anti-American sentiment, and therefore the threat of Terrorism?  "American direct intervention in the Muslim world" -- through our "one sided support in favor of Israel"; support for Islamic tyrannies in places like Egypt and Saudi Arabia; and, most of all, "the American occupation of Iraq and Afghanistan": 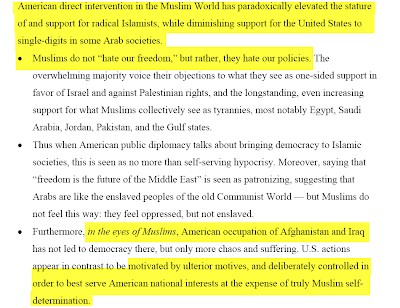 Let's just repeat that:  "Muslims do not 'hate our freedom,' but rather, they hate our policies."  And nothing fuels -- meaning: helps -- the Islamic radicals' case against the U.S. more than ongoing American occupation of Muslim countries:

For that reason, "a year and a half after going to war in Iraq, Arab/Muslim anger [had] intensified" and the war had thus "weakened support for the war on terrorism and undermined U.S. credibility worldwide" (see. 14-15).  Similarly, as of six months into his presidency, Obama had vastly improved perceptions of the U.S. among Western Europeans but -- as Der Spiegel put it -- he "has actually made little progress in the regions where the US faces its biggest foreign policy problems," particularly the Muslim world (other than Indonesia, where Obama spent part of his childhood, and Egypt, where Obama spoke).

We can't combat Terrorism by sending our military into Muslim countries.  Doing that only exacerbates the problem, since it inevitably intensifies the anti-American sentiment that enables and fuels the terrorist threat in the first place.  All of that is so basic.  It's been empirically proven over and over during the last decade.  It's not Noam Chomsky or Al Jazeera pointing out these basic truths, but instead, a 2004 Task Force handpicked by Donald Rumsfeld's Pentagon to review and assess the Bush administration's anti-terrorism efforts, principally the wars they were waging in Afghanistan and Iraq.

Undoubtedly, there is some small faction of "Islamic radicals" principally motivated by religious fervor which will likely hate the West regardless of what it does, but -- as the 2004 Pentagon-commissioned Report found -- their most potent weapons are American policies that inflame anti-American hatred in the Muslim world, beginning with ongoing wars waged by the U.S. military in Muslim countries.  That's so self-evident it shouldn't require a report to document it, but since it seems to, here's a very credible report that does exactly that.

UPDATE:  The latest rationale of the pro-war liberal think tanks -- as epitomized by Peter Bergen's New Republic piece yesterday -- is that Al Qaeda and Taliban are inseparable and therefore "we cannot defeat Al Qaeda without securing Afghanistan."  Steve Hynd has an interview with Afghan-based journalist Anand Gopal, who debunks that claim in several ways, as does Leah Farrall at the All Things Counterterroism blog.  Even if Bergen's claim were true, as Matt Yglesias points out, it merely "beg[s] the question -- [Bergen] says we’re fighting the Taliban because the Taliban is working so closely with al-Qaeda, but arguably the Taliban is working closely with al-Qaeda largely because we’re fighting them."

If -- as the conventional wisdom has it (correctly) -- Osama bin Laden was eager for us to invade Iraq and get caught up in an endless occupation there, wouldn't Al Qaeda and other Islamic radicals benefit for the same reasons from our doing the same thing in Afghanistan?

The U.S. is an empire in decline, according to Niall Ferguson, Harvard professor and author of The Ascent of Money.

"People have predicted the end of America in the past and been wrong," Ferguson concedes. "But let's face it: If you're trying to borrow $9 trillion to save your financial system...and already half your public debt held by foreigners, it's not really the conduct of rising empires, is it?"

Given its massive deficits and overseas military adventures, America today is similar to the Spanish Empire in the 17th century and Britain's in the 20th, he says. "Excessive debt is usually a predictor of subsequent trouble."

There's substantial dispute over Ferguson's general economic analysis but does anyone really dispute this?  From today's New York Times article on Robert Gates' trip to Japan:

Japan’s future contributions to the Afghanistan mission were to be on the agenda, but Mr. Gates said he would be making no specific request for either money or troops. Since the invasion of Afghanistan following the terrorist attacks in the United States of Sept. 11, 2001, Japan has pledged $2 billion for civilian reconstruction and security training, one of the largest contributors. About $1.8 billion has been distributed.

By comparison, however, the United States has budgeted $68 billion for its military and civilian effort in Afghanistan in the current fiscal year.

That number would obviously be much higher if we escalate.  One would think this factor would play a larger role in discussing whether we want to occupy and wage war in various countries for the next decade or so, but it seems that we believe if we just blissfully ignore that, it will cease to exist. Nero fiddles along.

UPDATE III:  Just as was true for the first two installments of David Rohde's account of being held hostage by the Taliban for seven months (which I wrote about here and here), his third installment, now available, bolsters all of these conclusions:

Some nights, commanders and their fighters visited the houses where we were being held. Conversations were dominated by their unwavering belief that the United States was waging a war against Islam.

It was a universe filled with contradictions. My captors assailed the West for killing civilians, but they celebrated suicide attacks orchestrated by the Taliban that killed scores of Muslim bystanders. They bitterly denounced missionaries, but they pressed me to convert to their faith. They complained about innocent Muslims being imprisoned by the United States, even as they continued to hold us captive. . . .

One morning, [Aby Tayyeb, chief of the captors] wept at news that a NATO airstrike had killed women and children in southern Afghanistan. A guard explained to me that Abu Tayyeb reviled the United States because of the civilian deaths. . . .

My captors saw me — and seemingly all Westerners — as morally corrupt and fixated on pursuing the pleasures of this world. Americans invaded Afghanistan to enrich themselves, they argued, not to help Afghans.

As is to be expected, Rohde's account contains widely divergent depictions of his captors -- some are violence-obsessed religious fanatics while others "showed glimpses of humanity" to him.  As is clear by now, the Tablian are not monolithic.  But in all of Rohde's accounts, there is one common strand:  fury towards the U.S. for invading and occupying their country, killing civilians, imprisoning people with no charges, and generally attempting to control the Muslim world.  There's simply no way to continue doing that while decreasing the threat of Terrorism.  The only thing that can result is the opposite.