The best and worst of the new TV season

"Modern Family" springs forward, "FlashForward" falls back, plus "Bored to Death" and "The Good Wife" outperform 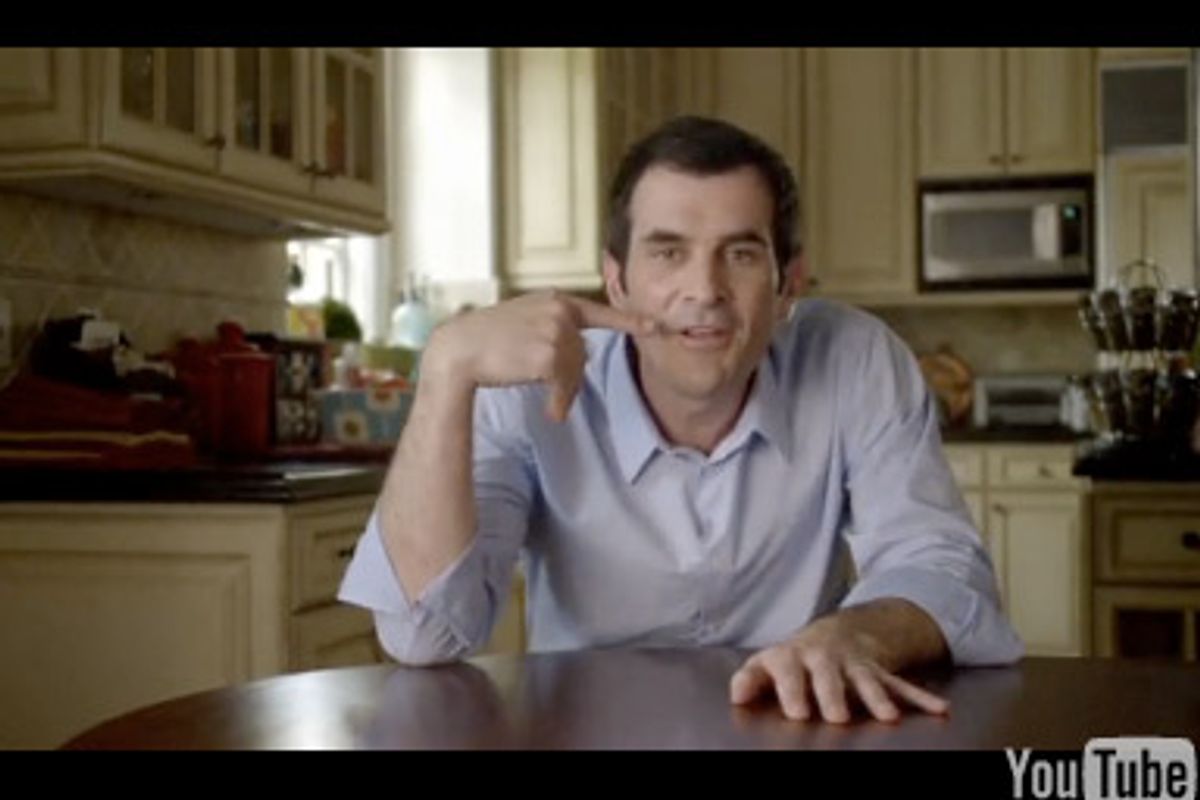 New TV shows usually suck. Take it from someone who watches every single one of them, every single year. Slogging through a herd of untested pilots can feel like speed dating for speed freaks: Twitchy people tell you their life stories in three seconds flat -- they laugh, they cry, they knock over their drinks, stuff blows up, ambulances arrive, roll credits. You're lucky if you escape without a migraine, let alone a venereal disease.

But this year was different. Watching this fall's new shows was like wandering through a magical bar filled with charismatic, funny people and delicious, icy-cold cocktails. Great music was playing, the mood was spirited, and everyone had a charming or poignant or funny anecdote to tell. As long as you stayed away from the ones wearing scrubs and surgical masks -- oh yeah, and the bony, Botoxed cougars -- you were sure to have a great time.

The life of the party this fall is ABC's "Modern Family." In a sea of attractive and witty guests, spewing quips and tossing back drinks, "Modern Family" (9 p.m. Wednesdays on ABC) is that unnervingly funny guy in the corner whose jokes keep making your mojito blast out of your nose. I've been waiting for this show to falter or underwhelm for weeks now, and each episode has been better than the last. Ty Burrell is consistently hysterical as hapless, pandering dad Phil. Here he is in one of my favorite scenes from the pilot:

Along with Burrell, Manny (Rico Rodriguez) -- that's Jay's (Ed O'Neill) kid -- is an unexpectedly hilarious character (loved the scene where he stroked his fake goatee when considering avenging the kids that drew it on his face), and every episode ends on just the right note. Yes, we saw it coming when Phil's teenage daughter's boyfriend, Dylan (Reid Ewing), sang a sweet love song that turned raunchy. But how great was that song? And then ending with the whole family, humming "I just wanna do you, do you" to themselves as they brushed their teeth or got ready for school? Brilliant. I love the dramatic choices by the excellent writers of this show, I love the little touches thrown in by this incredible cast (Eric Stonestreet as chubby, earnest Cameron makes me laugh out loud every single time he's on-screen), and really, I'm just in awe of "Modern Family." If you're not watching this show, you're nuts.

All of which stands in sharp contrast with another ABC show that I chose as one of the best new shows of the fall. If only I'd had a "FlashForward" to how mediocre this serial drama would become, I would've stopped watching weeks ago. From the lead character, Mark Benford (Joseph Fiennes), to his doctor wife Olivia (Sonja Walger) to his partner Demetri Noh (John Cho), this show is crowded with flat characters, and the story transformed from an eerie big bang of a pilot into a big sopping mess of nothingness in a few short (but seemingly endless) episodes.

It's astonishing to me that ABC could compare this show to "Lost" and then do so little to develop its characters over the first few weeks. What stands in for real character traits, back story and nuanced flaws on "FlashForward" (8 p.m. Thursdays) are cartoonish details like "He has a drinking problem" (Mark) and "She's a dedicated doctor, mother and wife" (Olivia). My favorite, though, is Demetri, who is somehow interesting because he's in love with his fiancée and he's going to die soon. He and his lady Zoey (Gabrielle Union) spend their time smiling sweetly at each other, which tells us zero about them, while Demetri tries not to harsh Zoey's premarital bliss with the nasty omens that he'll soon be dead.

Oh, and by the way? "He'll soon be dead!" isn't character development either, nor is it a hefty foreshadowing element when you don't know who Demetri is in the first place. Aaron (Brian F. O'Byrne) is still gloomily worrying about his daughter (whom we also know nothing about), Olivia's doctor friend Bryce (Zachary Knighton) has a new lease on life, but we don't completely understand why he was suicidal in the first place, and Nicole (Peyton List) is depressed about her vision of being drowned, but secretly, we can't wait until she's attacked because all she does now is wander around like a sullen model badly in need of a psychotropic intervention.

This is the trouble with pilots that have a powerfully creepy premise -- what if everyone on Earth blacked out at the same time, and had a vision of the future? -- along with lots of conflict and panic and exploding stuff in the first episode. All of the real drama is frontloaded, and then the rest of the series feels like slow-motion denouement. Unless the writers happen to have a really smart story to tell -- and, let's face it, writers who create an entire show around a premise this flashy aren't typically all that fond of subtlety or character development -- the whole thing is destined to fizzle before we come close to solving the central mystery.

I should've known better. The damage is done! "FlashForward" is the third most popular new show this fall, according to Nielsen, based on average ratings over the first four weeks on the air. In case you're wondering, CBS's "NCIS: LA" is first (personally, I'm indifferent to "NCIS" and its soon-to-be-countless spinoffs), CBS's "The Good Wife" is second (a great new drama, explored in more detail here, that richly deserves the attention), ABC's "Modern Family" is fourth (Hurray!) and ABC's "Cougar Town" is fifth (Oof). Not surprisingly, ABC has picked up all three of these shows for full seasons, along with the alternately amusing and tone-deaf Patricia Heaton sitcom "The Middle."

Aside from Courteney Cox and her chafing stampede of screeching harpies, you have to hand it to ABC. And it's great to know so early in the season that an excellent show like "Modern Family" and a promising show like "The Middle" will both be around for a while.

Which shows won't be around? All of the new medical dramas seemed to be on life support this fall, from NBC's flashy but blunt EMT dud "Trauma" to NBC's mercilessly self-righteous nurse drama "Mercy" to CBS's stomach-churningly bad organ-donor soap "Three Rivers." Nonetheless, "Mercy" unexpectedly won its time slot last week, so those tireless nurses are likely to keep wagging fingers at cartoonishly self-concerned doctors for a little longer.

Just in case you care (which seems unlikely), the CW's "The Beautiful Life" was the first pilot to be officially canceled, taken out at the knees after just two pretty but empty episodes.

As far as older shows go, Fox's "Dollhouse" has been getting horrible ratings, even with a bump from DVR viewing, which is disappointing because the series has been smart and transfixing lately despite consistently lukewarm performances by Eliza Dushku. (Can't someone just give Joss Whedon a blank check to create his own show without strings attached? What, the TV industry doesn't work that way? Why not?) In other confusing, "What were they thinking?" news, NBC's promising cop drama "Southland" was given the ax before even a single episode of its second season could air, presumably because Leno has razed the 10 p.m. time slot on that network with his slow, lumbering reign of terror. NBC is really suffering from its crappy decisions this fall.

But as long as NBC keeps its new comedy "Community" (8 p.m. Thursdays) around, I won't be complaining -- at least not for another few seconds. "Community" is still hilarious and has more than enough absurd moments per episode to keep me watching. Joel McHale's character isn't all that interesting, because he's too busy mooning over Britta (Gillian Jacobs), but the others are great, from Abed's (Danny Pudi) alien hoax to Chevy Chase's deadpan confused retiree to Senor Chang's (Ken Jeong) unraveling mental health, showcased in this clip:

Scenes like that one leave "Community" battling it out for the second-best new comedy of the fall against HBO's "Bored to Death" (9:30 p.m. Sundays) and Fox's "Glee" (9 p.m. Wednesdays). "Glee," which has been picked up for a full season, balances some recent lackluster music numbers with consistently great scenes featuring sadistic cheerleading coach Sue (Jane Lynch), while "Bored to Death," which is already lining up a second season, continues to amuse, mostly thanks to priceless moments featuring Zach Galifianakis and Ted Danson.

So let's raise our glasses to the best fall season of TV in years! Keep the music blasting, the laughter roaring and the free drinks flowing as long as you can, network and cable overlords, because on TV, the good times can only last for so long. Here's to keeping the magic alive a little longer -- or at least as long as it takes for Dylan on "Modern Family" to pen another sleazy love song.