DVDs you should have seen -- but didn't 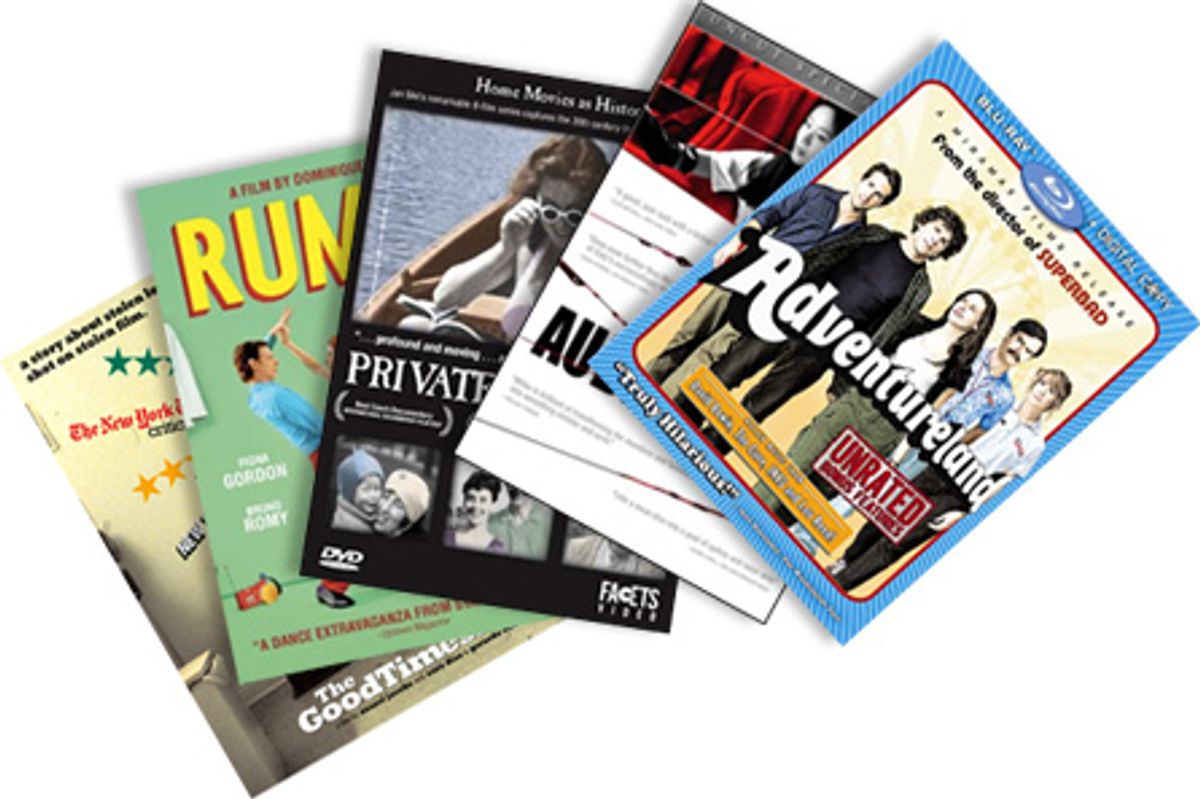 I keep vowing to publicists, editors and even a reader or two that I'll crank out these DVD roundups in something closer to a more regular fashion. But there's always some damn thing that trips me up, like the biological need for sleep and the fact that it's considered bad form to review films you haven't actually, you know, watched and stuff. (Check it out: One of the sets reviewed herein is an eight-hour documentary. In Czech. It was totally worth it and all, but seriously.) So suffice it to say there's way more stuff piled on the floor of the cubby I so laughably describe as my "home office," and I'll dig through some more of it soon. This time around we've got Chloë Sevigny, Kristen Stewart, Fiona Gordon and Sara Diaz, supplying a veritable feast of quirky, off-center gal performances. (No, the woman in "Audition" definitely does not count.)

"Adventureland" & "The Last Days of Disco" It's an early-'80s pop-apalooza double bill! Although made a decade apart in vastly different settings, Whit Stillman's "The Last Days of Disco" (a surprising but welcome new release from the Criterion Collection) and Greg Mottola's "Adventureland" are hilarious and often pungent chronicles of an era that can seem at once incredibly distant and also eerily resonant, an era when disco, punk, AIDS, gay and straight collided to create the first Frankensteinian stirrings of the perma-alternative culture we know today. I mean, admittedly I'm exactly the right age for this, but I love them both, a lot.

I don't know what to make of Stillman's career and never have. A Manhattanite from a prep-school, Upper East Side background, he made three effervescent, indifferently structured features that somehow split the difference between Woody Allen and Quentin Tarantino and promised a tremendous career to come -- and hasn't made one since. "Last Days," Stillman's last and best film, chronicles the decline and fall of a legendary nightclub not unlike Studio 54, as seen through the eyes of an awkward, virginal Hampshire grad named Alice (perhaps Chloë Sevigny's signature role) and her pretty-roommate-from-hell Charlotte (Kate Beckinsale). It's both dry and passionate, which is the Stillman touch. Perhaps the most memorable scene in "Last Days" is the moral debate about the characters in Disney's "Lady and the Tramp," conducted between a hunky assistant D.A. (Matt Keeslar) and the drugged-out rake (Chris Eigeman) he's planning to bust.

If "Last Days of Disco" has almost been forgotten, "Adventureland" was released just a few months ago. But since Greg Mottola's yarn about an overeducated college grad (Jesse Eisenberg) washed up among the stoners, geeks and party girls of a suburban Pittsburgh amusement park failed to win the love of moviegoers the first time around, it deserves a plug. A formula picture rarely done well -- the post-collegiate period romance -- is handled beautifully here, with a mixture of winsomeness and broad comedy that lets you know Mottola knows his early-INXS, late-Bowie faintly rebellious suburban youth culture. Kristen Stewart of unfortunate and permanent "Twilight"-franchise fame is delightful as the tomboyish, deadpan love interest. I think my favorite scene is Margarita Levieva's slo-mo entrance as the park's queen-bee Popular Girl, but Ryan Reynolds is also priceless as the park's bohunk rock-god, the one who claims he once jammed with Lou Reed.

"Audition" As director Takashi Miike politely warns in his video introduction to this 10th-anniversary, double-disc set of his Japanese horror classic, "You may regret watching this movie." You may indeed, in that even after legions of bloody-minded imitations on both sides of the Pacific (most of them execrable), "Audition" still has the power to enter your dreams. Not a fantastically gory film, "Audition" is nonetheless a profoundly disturbing one, as much for its subtle portrait of the subterranean war of the sexes as for its infamous conclusion, when wounded widower Aoyama (Ryo Ishibashi) finally finds out what the 24-year-old, supernally gorgeous ballerina (model Eihi Shiina) he's been pursuing really wants from him.

Yes, "Audition" helped inspire the so-called torture-porn explosion, but Miike's film has a witty, dark fatalism, and a superlative craftsmanship, that takes it far above nasty thrills. It's either a story of romantic love gone horribly off the rails, an object lesson in why middle-aged men shouldn't act like twits or a fable about things that look too good to be true. In either or all of those stories, Aoyama has every chance to walk away. What happens at the end of the film, when we discover who's been auditioning for whom, is only what he has willed upon himself.

"Private Century" Perhaps the most remarkable episodic film out of Eastern Europe since Kieslowski's "Decalogue," Czech documentarian Jan Sikl's eight-part "Private Century" was constructed entirely out of donated home movies, photographs and other documents, made by several different families between the 1920s and the '80s. What sounds at first like a dry, academic exercise -- a social history of 20th-century Czechoslovakia -- quickly becomes a riveting, multifaceted account of public and private worlds in collision. A Czech-German family troubled by lies and sexual infidelity visits Berlin in 1934, and in between snatches of surprisingly racy intimate footage we see swastika-festooned slogans through a streetcar window. As it happens, the Czech nation was at the center of Europe's 20th-century dramas, from '30s bohemianism to the Holocaust to the Iron Curtain, the Prague Spring and the Velvet Revolution, and all of that can be found in Sikl's film -- but mostly as backdrop. What's amazing about "Private Century" is how much he makes the domestic dramas of ordinary people, most of them long dead, come alive, so we are reminded of a fact history often elides: Life consists a lot less of great men making speeches and armies marching to and fro than it does of people taking naps, playing silly games with their kids and coveting their neighbors' wives.

"Rumba" Chaplin and Jacques Tati aren't dead after all -- they've been reincarnated in the unlikely but lithe bodies of Dominique Abel and Fiona Gordon, the Anglo-French dancing-directing duo behind this ridiculously entertaining little movie, which has almost no dialogue but is jammed to the gills with absurd delight. I could tell you that "Rumba" is officially about a Latin-dance champion couple severed by a terrible car accident, but that's doing the movie a disservice on numerous levels. "Rumba" isn't about its purported plot at all; it's about the combination of bravura dance numbers and slapstick set pieces that Abel (a grave, long-faced Frenchman) and Gordon (a gawky, horsey and mysteriously sexy Scottish woman) can pull off, the ludicrous outfits they wear, and the comic-pathetic-tragic ways they try to navigate the everyday world and its objects. Wait till you see Gordon dealing with an English class, a stack of unruly papers and a pair of brand-new crutches. First she made me laugh until tears came to my eyes, and then she simply made me cry as I recognized her pride and clumsiness and utter ineptitude as my own, as in fact the human condition.

"The GoodTimesKid" Finally the DVD universe encompasses the funky-fresh, Jarmusch-meets-Godard-in-downscale-L.A. debut feature from ultra-indie hero Azazel Jacobs. Here's what I wrote on first viewing in 2007:

Jacobs himself plays a slacker idiot named Rodolfo, who abandons his wry, cute, long-legged girlfriend (Sara Diaz) to a near-silent sailor who has exactly the same name as him, and who has crossed his path at an Army induction ceremony. (Don't ask, because I can't really explain it.) Rodolfo No. 2 (Gerardo Naranjo) moves through the film in a nearly silent state of rumpled, Chaplinesque dignity, even as Diaz's character dubs him "Depresso," performs a beautiful Converse-sneaker soft-shoe routine for him, and then beats him up for following her.

Those two take a bus ride and spend the night on a boat, where Rodolfo No. 2's psycho girlfriend shows up, the one who has spray-painted "FUCK YOU I HATE YOU CALL ME" across his door. Then they go back home, where Diaz (character and actress have the same name) smashes Rodolfo No. 1's favorite punk albums and draws a mustache on the sleeping girl he's brought home. That's really about it; it's plenty. "The GoodTimesKid" has a whimsy, a passion, a sophistication and, above all, a vigor that's mostly drained out of Amerindie cinema over the last decade or so.