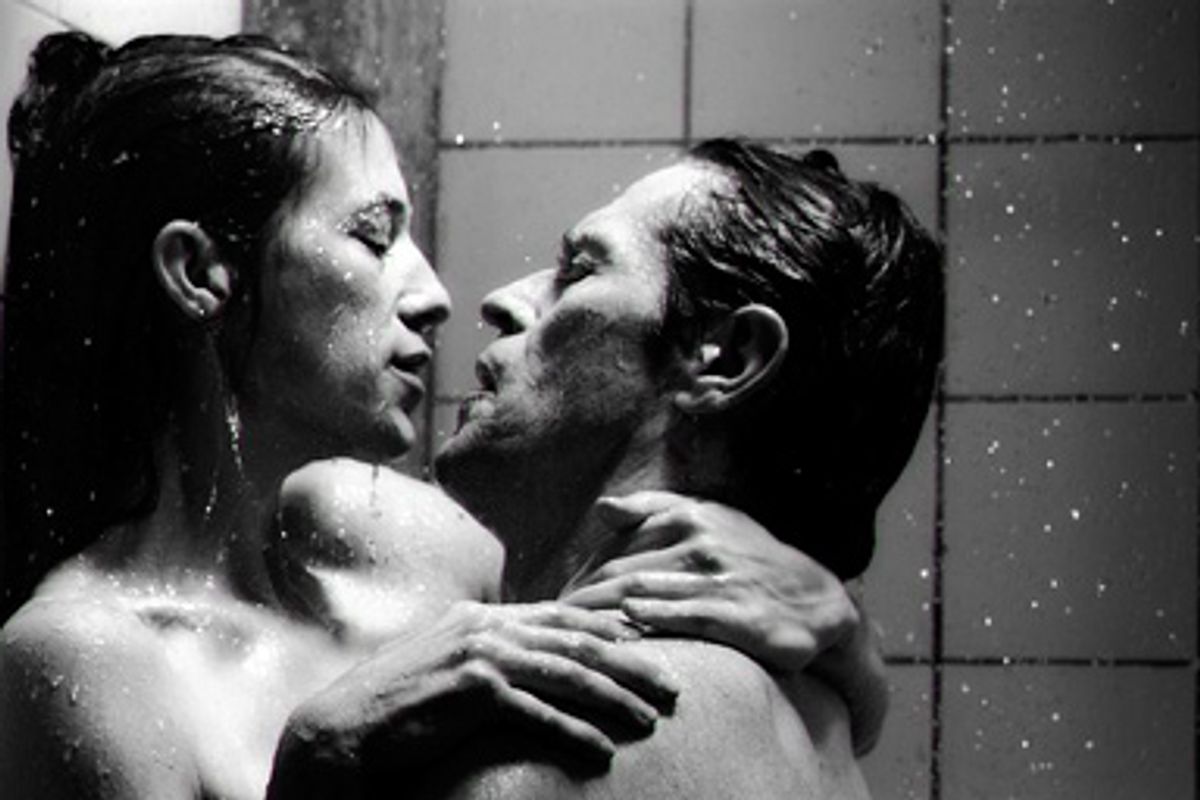 It's tempting to respond to Lars von Trier's "Antichrist" purely as an act of provocation, when it's really a cry of pain, and as such not fully articulate or comprehensible. Throughout his career, von Trier has fed on strong reactions, even insisted upon them. When informed during a press conference conducted by videophone after a New York Film Festival screening of "Antichrist" -- the Danish director rarely travels, and has never been to the United States -- that there had been few, if any, walkouts during the film, von Trier sighed heavily: "Then I have failed." He got a big laugh.

I'm inclined to think that the only honest way to deal with a movie as dreamlike and filled with self-hatred and sealed off from the world as "Antichrist" is by resisting von Trier's shtick. In other words, by withholding and scrutinizing your own strong reactions, by working your way around von Trier's pathological longing to be pilloried by many and adored by a few. So I'm not here to tell you that "Antichrist" is a great film, however much I admire its beauty and daring, because I think it's too damaged and crazy to be a great film. I'm also not here to tell you that it's a misogynistic abomination made by a sadist, even though that's one of the reactions von Trier has set out to provoke, and even though many women (and many men) may well decide they don't want to travel down the dark road into these particular deep woods.

If you've heard anything about "Antichrist," then my telling you that it's beautiful probably sounds like an act of willful intellectual perversity. Very likely you've heard a list of gruesome highlights that make it sound like a nasty Internet video from Lithuania: an explicit sex act so violent that the man ejaculates blood, a hole driven through someone's leg with a power tool, a woman mutilating her own genitalia with a pair of scissors.

Those things all happen in the movie's grotesque final act, and they are undeniably shocking (and meant to be). Taken together, they probably account for a minute or so of screen time, about 1 percent of the movie. They don't define or encompass "Antichrist" any more than "The Godfather" can be boiled down to that severed horse head. In fact, I'd argue that these scenes of violence are far from being the worst scenes in the movie. They emerge from von Trier's original desire to make something close to a conventional horror film -- you can see traces of "The Shining" and "Rosemary's Baby" in "Antichrist" -- and they're only superficial or symbolic representations of the real violence between the unnamed central couple, played by Willem Dafoe and Charlotte Gainsbourg.

Taken as a whole, "Antichrist" is a gorgeous, mesmerizing construction, and almost every one of its frames shimmers with demented, imaginary life. (Cinematography mavens: Anthony Dod Mantle makes spectacular use of two new hi-def digital cameras, the Red and the Phantom.) It offers more proof, if we need any, that von Trier is one of the most accomplished cinema artists of our time, and also perhaps the most deeply trapped in his own head.

"Antichrist" is overcrowded with amazing ideas and images, but its plot -- a Pacific Northwest couple lose their child and spiral into violence and madness -- is so hackneyed it virtually doesn't exist and definitely doesn't matter. The movie also isn't really about the conflict between men and women, or the one between human beings and nature. Those, too, are metaphors for the real war waging inside one man's brain.

We begin with sexual ardor and its connection to death -- excuse me, Lars, there's a phone call from Vienna for you -- in a gorgeous, wordless, black-and-white slow-motion sequence set to a snippet of baroque opera (it's Handel's "Rinaldo"). Dafoe and Gainsbourg (known only as He and She) make passionate love in their marital bed, their bodies forming a graceful chiaroscuro composition. United thus in ecstasy, they don't notice that their 1-year-old son, Nic -- the only character in the movie with a name -- has escaped from his crib, wedged open the child gate and paused for a view of this primal scene.

From there it continues, as the erotic dream transmogrifies into nightmare: Sweeping aside allegorical statuettes of the "Three Beggars" -- Grief, Pain and Despair -- Nic slowly clambers atop someone's desk (Mommy's or Daddy's? We don't know), fascinated by the adjacent window and the falling snow outside. He pushes his stuffed bear over the ledge to get a better look, and then gets a better look himself, toppling, with exaggerated slowness and no apparent fear, out the window and down to the snowbound street. As both a parent and a movie critic, I indulged myself in all kinds of defensive, counter-narrative responses during this terrifying scene: Snow in Seattle? Not that common. Also, a lucky child might just survive that fall.

Of course we aren't really in Seattle. Although "Antichrist" is closer to the tradition of realistic narrative cinema than anything von Trier has made since "Breaking the Waves," there's only a cursory effort to make his European sets and locations look like northwestern North America (or like any other actual place). As for the child, he's never a character in the movie at all, and is only a necessary symbolic sacrifice, a key meant to unlock all the terror and pain held within his parents.

At Nic's funeral Dafoe walks behind the hearse, conspicuously blubbering, while Gainsbourg stumbles along a few steps back, stonefaced, before collapsing to the ground. The other mourners are blurred, indistinct creatures; even while He and She are still supposedly part of the metropolitan world, they've already withdrawn into a realm of private suffering. Furthermore, this scene establishes the dynamic between them: He is appropriate, rational, in control; She is isolated, unstable, unpredictable.

One of the answers to the von Trier-as-misogynist argument has always been: Check out his men! Dafoe's masterfully rendered He is a classic example, a witty, attractive and supremely controlling therapist who suggests that for Gainsbourg's She to work through her grief -- which is perfectly normal, he keeps assuring her in patronizing terms -- she needs to confront her worst fears. It's always a really good idea to serve as your bereaved wife's shrink, especially when you're a megalomaniacal asshole who's only dimly aware that you're suffering from paranoid delusions.

Well, her fears happen to involve the couple's remote cabin in the forest, where She spent some not-so-happy time with Nic the previous summer. (She was "working on her thesis," which is about "gynocide," the mass murder of suspected witches in the Middle Ages.) They call the place Eden, half in jest, and like so many stupid protagonists in so many horror movies before them, they decide to go there, just the two of them. Most of this couple's harrowing slide into self-destruction happens there, while von Trier follows a chapter sequence evoked in that opening scene: First "Grief," then "Pain" and "Despair," and finally "The Three Beggars." (This is supposed to be an astronomical constellation that comes with sinister medieval mythology attached, but as far as I can tell the whole thing is a von Trier invention.)

Let's see, a manipulative and half-crazy man, and a hysterical and full-on crazy woman, all alone in Eden. Can I get the Lord God Jehovah, and a serpent? Well, maybe. Those two entities, you might say, are everywhere and nowhere; they decline to reveal themselves in concrete terms. (Von Trier has described the film as a testament of atheism.) Both He and She become convinced that the natural world around them isn't just unconscious and uncaring but actively malevolent: Acorns hammer on the roof by the dozen; Dafoe sleeps with his hand out the window and brings it in crawling with snails. But then, von Trier draws no clear distinction between the movie's so-called reality and the characters' psychological world. Does Dafoe really keep encountering maimed forest animals, who approach him without fear? Does one of them actually talk to him? (A fox. It croaks: "Chaos reigns!") I don't believe these are productive questions.

If there are elements of distorted Genesis mashup in "Antichrist," perhaps mixed with the story of Jesus, Mary and Joseph and the Book of Revelation, there are lots of other things too: A writer's half-concealed private madness, as in "The Shining"; graphic mutilation scenes and ghost-haunted landscapes out of East Asian horror movies; the Freudian and frankly misogynistic marriage dramas of August Strindberg.

As von Trier has admitted, "Antichrist" originated as an attempt to struggle free from a deep depression, one in which he wondered whether he'd ever make another film. During that genial New York video conference, he said he hadn't exercised anywhere near his normal level of directorial and editorial control, and didn't feel completely happy with the finished product. When someone asked about all the explicit religious symbolism in the picture, he shrugged it off: "Normally I would have gone through the script and taken all that shit out."

He also said he identified strongly with both characters, with all their "violence and stupidity," with their efforts to punish themselves and each other for a terrible event that may not have been anyone's fault. Of course viewers can't rely on an artist's declaration about his intentions; the movie is all we really have. But those comments confirmed my sense that this isn't just the most personal film von Trier has ever made, but something like an unconscious film. As magnificent as Dafoe and Gainsbourg are, they're specters in a shadow play excavated from the deepest recesses of Lars von Trier's troubled psyche. It's an amazing place to visit, but I wouldn't want to live there.