What's the matter with black Barbie? 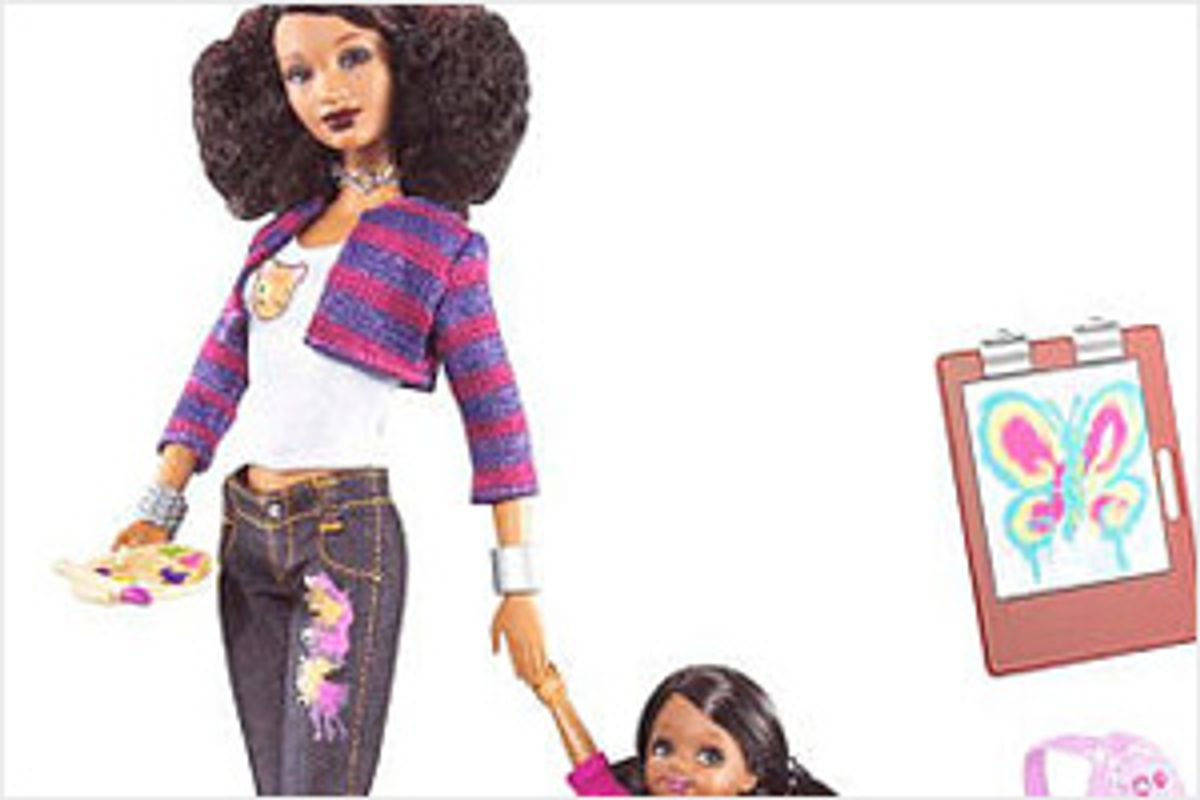 From blogs to mainstream news sites to parenting message boards, debate is raging over a new trio of African-American Barbie dolls. Ever since Mattel released Grace, Kara and Trichelle, at the end of September, everyone seems to have an opinion on whether the dolls are a step forward, fall short of accurately representing real black women or simply continue to perpetuate the same unrealistic beauty ideals as the original Barbies.

So, why is this conversation happening now? After all, black Barbie dolls have been around for decades. What's the difference? Well, in the past, most African-American Barbies have been nothing more than white Barbies -- complete with skinny noses, dainty lips and long, silky, straight hair -- dyed a few shades darker. The new dolls, designed by Stacy McBride-Irby and inspired by her own young daughter, are (finally!) meant to reflect what black women actually look like.

But not everyone agrees that they do. The dolls' lips are fuller, and their noses wider, yet many critics aren’t happy with the hair. Although one of the new Barbies has curly, shoulder-length locks, another has impossibly shiny, delicately wavy, light brown hair, and the third doll has the same long, straight mane as her predecessors. As one CNN commenter, who was generally supportive of the dolls, put it, “the hair is still a step backwards, since most of our hair is not straight and light brown." One woman interviewed for an Associated Press article thought the dolls would be more realistic with “a little short afro, or shorter braids.”  On the Black Voices message board, where many seemed to support the new Barbies, one writer said, “I would love to see a variety in the hairstyles of the dolls -- some permed, some natural.” But, she wondered, “Would the naturals sell?” The Telegraph notes that the line includes a particularly questionable accessory: A “hairstyling set that allows girls to straighten their dolls' hair completely has alarmed observers, who say it will fuel the ‘beauty issues’ that many black girls have.” According to Sheri Parks, an associate professor of American Studies at the University of Maryland, "Black mothers who want their girls to love their natural hair have an uphill battle and these dolls could make it harder."

Others point out that the dolls may be just as damaging to girls’ body image as original Barbies. As Joy Behar so eloquently put it on “The View,” “Black or white, they're still anorexic with breast implants.” Another Black Voices commenter advised those who didn’t like the dolls to find more educational toys for their children: “Instead of buying dolls for their daughters, but [sic] them circuit board kits or scientific kits that teach them about science and technology so they can get a head start on the rest of the kids.” One mom quoted in the Sacramento Bee agrees that Barbies are simply to be avoided, especially for her multiracial daughter. “It's harder to find dolls that she can totally identify with because she is black, white and Filipino,” Allison Crumley told the paper. “I don't think toy companies are realistic. They need to diversify, especially for multiracial kids. There are so many different cultural blends. Maybe they are just overwhelmed with the possibilities.”

Yet many parents -- of all races -- are thrilled about the dolls. And there are certainly aspects to celebrate: Although one of the dolls is characterized solely as a cheerleader, the others are impressively career-oriented. While Trichelle favors art and journalism, Kara is fond of math and music. (Remember, this is coming from Mattel, the company that, in the ‘90s, offered a talking Barbie who said “math class is tough.”) Each doll also has a designated “little sister” to emphasize the importance of being a role model. So, as much as I agree with the criticisms and hope they will be taken into consideration for the next generation of black Barbies, I can’t deny that the new dolls are miles ahead of their predecessors. Considering that Mattel’s other big idea for this season is to rebrand Barbie as a “Fashionista," it’s hard to find too much fault with a set of dolls that has some depth.