What "controlling the media" really means

The same media whining over criticisms of Fox was happy to be bullied and controlled by the Bush administration. 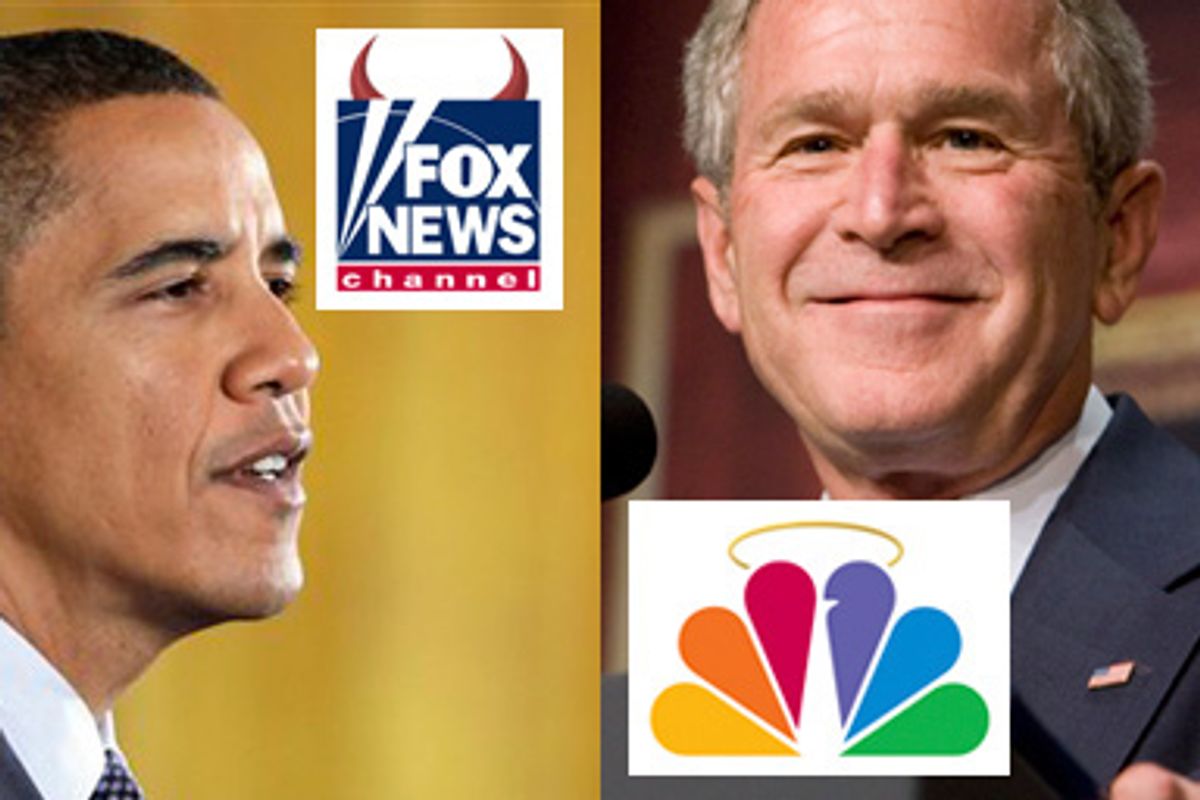 Hypocrisy is far too common a feature of our political culture to comprehensively chronicle, particularly when there is a change of party control and each side starts doing exactly that to which they spent the last several years vociferously objecting; see here for a vivid example of that dynamic, from a new Pew poll released today:

The belief that the press should keep political leaders from doing things that should not be done often depends on who those political leaders are, or more specifically, which party controls the White House. Currently, in the midst of the Obama administration, two-thirds of Republicans (65%) support the so-called "watchdog role" for the press, compared with 55% of Democrats. But last year, while Bush was still in office, only 44% of Republicans felt it was good that press criticism keeps political leaders honest, and Democrats were much more pro watchdog (71% supported press criticism). This partisan pattern has existed since the question was first asked by Pew Research in 1985.

With hypocrisy that pervasive, who could ever hope to take note of all of it?  Still, the complaints from America's Right -- and especially former Bush officials -- that the Obama administration is attempting to "control the media," all because the White House criticizes Fox News, is in a class of hypocrisy all by itself.  That those petulant complaints are being amplified by a virtually unanimous press corps -- "it's Nixonian!" is their leading group-think cliché -- makes it all the more intolerable.

John Cole itemizes just some of the measures adopted by the Bush White House to manipulate, control, punish and bully the very few media outlets which were ever hostile to it -- each of those Bush measures, standing alone, is infinitely more invasive and threatening than the mild and perfectly appropriate criticisms of Fox coming from the Obama White House.  Indeed, the Bush White House did exactly the same thing with NBC as the Obama White House is doing with Fox, and virtually all of the media stars who today are so righteously lamenting the "attacks on Fox" said nothing.  Worse, the very same Bush official who this week said it was "like what dictators do" for the Obama White House to criticize Fox -- Dana Perino -- herself stood at the White House podium a mere two years ago and did exactly that to NBC News.

But the Bush administration did far worse to media outlets than merely criticize them.  They explicitly threatened to prosecute New York Times journalists -- to criminally prosecute them -- for reporting on Bush's illegal spying program aimed at American citizens.  They imprisoned numerous foreign journalists covering their various wars.  The administration's obsessive and unprecedented secrecy -- Dick Cheney refused to disclose even the most basic information about his whereabouts, his meetings, or even the number of staff members he had -- was the ultimate form of media control.  And what was the Pentagon's embedding process other than an attempt to control media coverage and ensure favorable reporting?  One will search in vain for much media protests about any of that.

But it was the Bush Pentagon's "military analyst"/domestic propaganda program that was, far and away, the most egregious case in a long, long time of a White House attempting to control media content and political coverage in the United States.  And with very rare exception, not a single television network or cable news program ever even mentioned any of that -- despite David Barstow's having won the Pulitzer Prize for uncovering it -- because all their networks were implicated by it.  To see how extreme a form of "media control" that was, just look at what the Bush Pentagon itself said it was doing.

As part of that propaganda program, the Bush DOD -- as they put it -- "develop[ed] a core group from within our media analyst list of those that we can count on to carry our water."  They then fed those water-carriers with exclusive, secret tips about what the Government was doing, to ensure that TV programs would be forced to rely only on pro-Bush sources -- armed with "exclusives" -- while ignoring their critics.  Here's how the Director of DoD Press Operations explained that tactic in a memo to key Rumsfeld aides, including Larry DiRita, the top Pentagon spokesman:

By providing them with key and valuable information, they become the key go to guys for the networks and it begins to weed out the less reliably friendly analysts by the networks themselves . . . .

The Bush Pentagon had a program "to weed out the less reliably friendly analysts" from appearing on television networks.   That would ensure not only that on-air pundits were "carrying water" for the Bush White House, but also that the networks' story choices and coverage of military matters would be shaped by those same water-carriers, since the networks' military analysts "have a huge amount of influence on what stories the network decides to cover proactively with regard to the military. . . . "  It's hardly possible to imagine a more blatant effort to "control the media" than that.  There is nothing the Obama White House has done regarding the media that even comes close.

Whatever else is true, Fox has taken on a political role that is very rare, at least in modern times, for a large American news organization.  Its news coverage is not merely biased or opinionated; there'd be nothing unusual about that.  Instead, it is a major participant -- the leading participant -- in organizing, promoting and fueling protests, including street protests, against the government.  Fox has undertaken a role typically played by media outlets in, say, Venezuela or various unstable, under-developed countries -- sponsoring rather than reporting on protests against the government -- and it is difficult to recall any recent example that is similar.

Fox has every right to do that, but the pretense that it is a news organization is ludicrous -- transparently so -- and there isn't anything remotely wrong with the Obama White House saying so.  Even those with high tolerance levels for blatant double standards should have a very hard time watching Bush officials of all people -- along with their media-star allies -- whine about criticisms of Fox coming from the White House, when the prior eight years were marked by an administration that attempted to dominate and control media coverage more than any in modern history, along with a media that seemed perfectly content, even happy, to be controlled.

UPDATE:  Regarding the new blog format:  This is part of an overall, substantial re-design of Salon, which is providing significantly more functionality and other site-wide improvements.  It's natural to react negatively to any changes of this sort when they're first implemented; the important question is whether those negative reactions persist after the initial shock wears off.  Either way, the format is still in its "beta" stage and Salon is genuinely interested in hearing feedback -- both positive and negative -- so feel free to provide it here.

On a different note, here is the segment I did this morning on MSNBC's Dylan Ratigan show regarding the spate of recent alleged domestic terrorist plots.  My commentary starts at roughly 1:55: